The last couple of weeks have been a bit of an emotional roller coaster.  Absolute joy that Jennie's hip replacement is going ahead in early February and her suffering over the last year or two will shortly be at an end.   It will be fantastic to have her operating at full steam again.  It's being done at a private hospital and no mucking about these days - they have you up and walking the next day (with crutches) and generally send you home a couple of days later.  No riding for me in Feb whilst I'm taking care of her and doing the household duties but so good to have her out of pain.  It also means that our trip to China at the end of  May can now go ahead as planned.  For a while, it looked like we might lose the deposit with all the medical uncertainty.

This week has been a sad one as we said goodbye to our 17 year old part - Russian Blue cat Thomas.  We got him as a rescue kitten from the SPCA.  The photo below was taken on the day we brought him home.  He looked so sad as he had a weepy eye and maybe that was part of why he was chosen. Or did he choose us..... ? 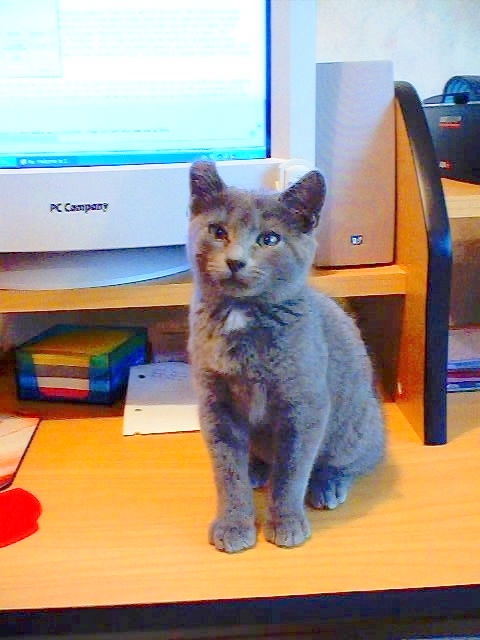 He quickly attached himself to Jennie and became quite a character in the neighbourhood.  Thankfully, he was good mates with the cat next door but scrapped with any other felines in the neighbourhood and was quite happy to take on sizeable dogs too.  The local vet got a nice income stream from regularly patching him up! 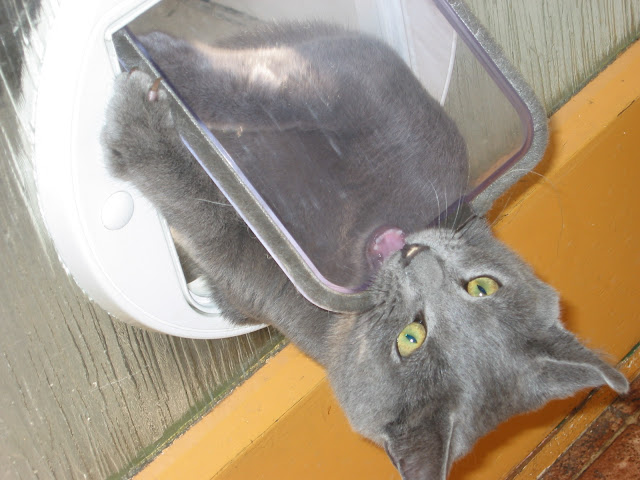 Attacking the cat flap for some unknown reason

He loved his food and became pretty well-known in the neighbourhood for turning up at BBQ's up to a couple of streets away.  Ever-polite, he wouldn't scrounge - he'd simply sit and stare at someone until a bit of steak or sausage was forthcoming!

When we retired and moved to Coromandel, he loved the lifestyle and often walked to the beach behind our place and explored the rock pools. 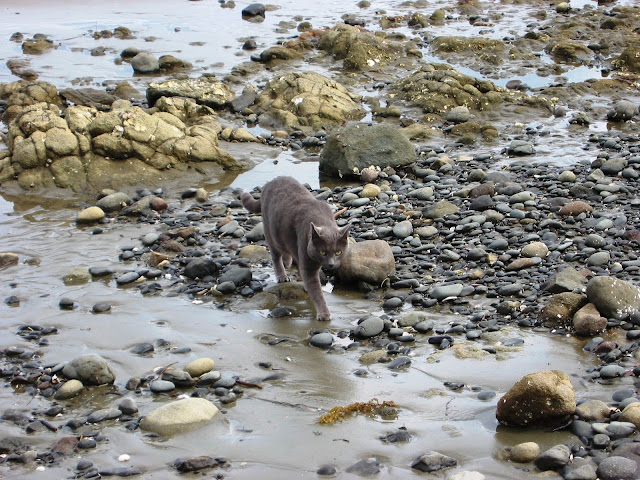 Exploring the rock pools at the beach

Thomas was always into thinking big.  He couldn't be arsed to chase the local bird population but on numerous occasions, we'd wake in the morning to the sight of a rabbit hopping around the lounge which he'd dragged through the cat flap.  He never hurt them - just used to bring them home and watch them.  His crowning glory (so to speak) was dragging a very angry pheasant through the cat flap one day which proceeded to flap round the house and poop everywhere before we could get it outside.

After that, he settled for an easier life and recognised that neighbours flushing their outboard engines meant that they'd shortly be filleting their catch.  He'd saunter off and politely sit by their filleting benches waiting to receive trimmings.  Always a very dignified cat.  One near-neighbour used to place a fish scale on his head to signify that he'd been fed when he finally arrived home! 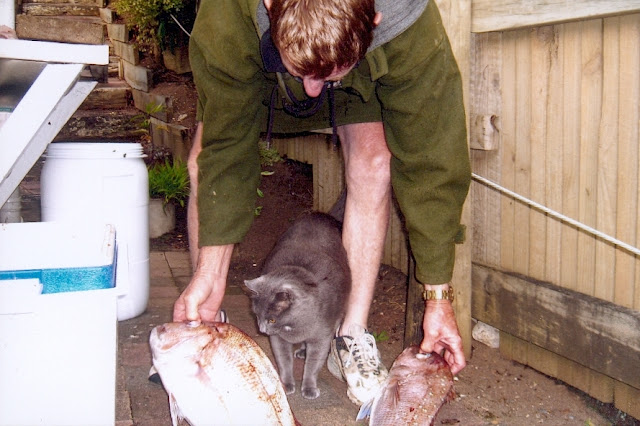 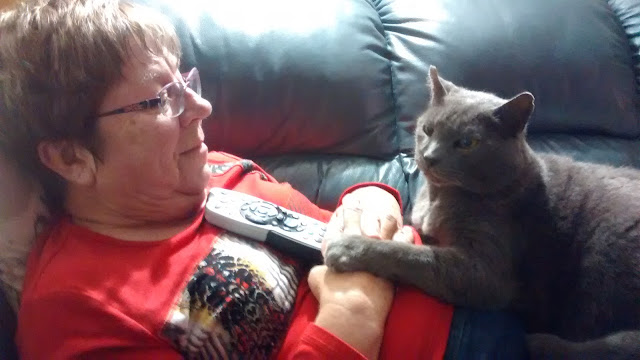 Tussling for the TV remote with his personal servant

A few tears have been shed over the last few days.  As with all animal lovers, they're family and we grieve accordingly when we lose them.  It's one of the nicer traits of the human race when we can give unconditional love to another species.  RIP Old Fella. 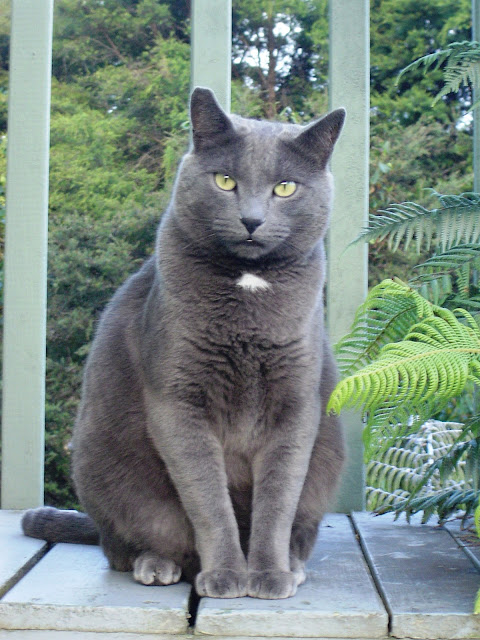 We've been out fishing regularly because of Jennie's upcoming enforced break and so far, it's been a scorchingly hot summer.  In fact, too hot to be on the water for long without good protection.  UV levels in NZ are pretty high and we share with Queensland (Australia) the dubious distinction of having the highest skin cancer levels in the world.   Time to fit a canopy to the boat so that was our slightly belated joint Christmas present to ourselves.

Spent the best part of a day this week assembling and fitting it.  Most of the time was spent in careful measurement and trial fitting before drilling holes.  Not a good look to have surplus holes on a boat.  Delighted to say that everything went well and it works perfectly.   Surprised to find that it was made in NZ, not China.  Great quality product with clear instructions.  Can't wait to try it out. 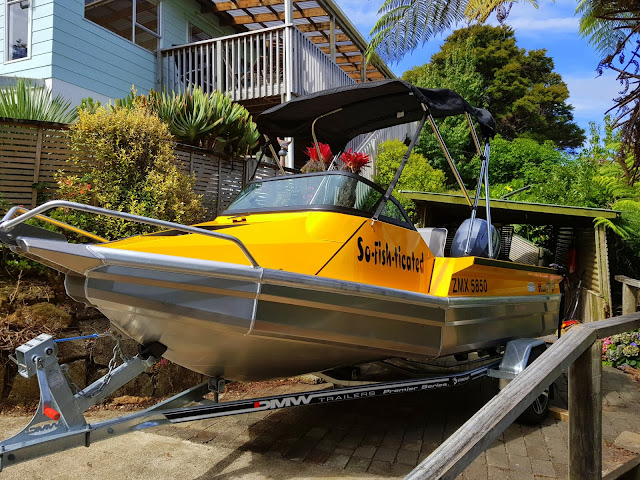 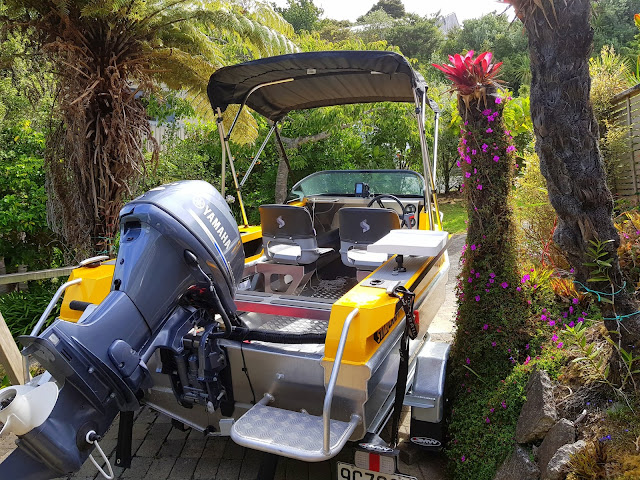 
Oh, and in other good news, I've been given Executive Permission (official trade name) to replace the Suzuki this year.  Won't do anything for a few months but there will be some delicious test riding to be done.  Going for something lighter as a nod to my age but no sacrifice in performance.  Errr... I haven't actually mentioned the performance angle to Jennie as I'm trying to portray uncharacteristic maturity.

It will come as no surprise to regular readers that another Street Triple is one of my two front-runners.  This time, the 765 R or RS.  However, the other choice might raise a few eyebrows!  It's the KTM 790 Duke.  Despite (or because of my 71 years on the planet), maybe it's time to get an utterly mad wheelie monster of a machine that spells FUN in huge capital letters.  Not that I'd ever be caught behaving like that, oh dearie me no.