Maintenance time, a new jacket and other stuff 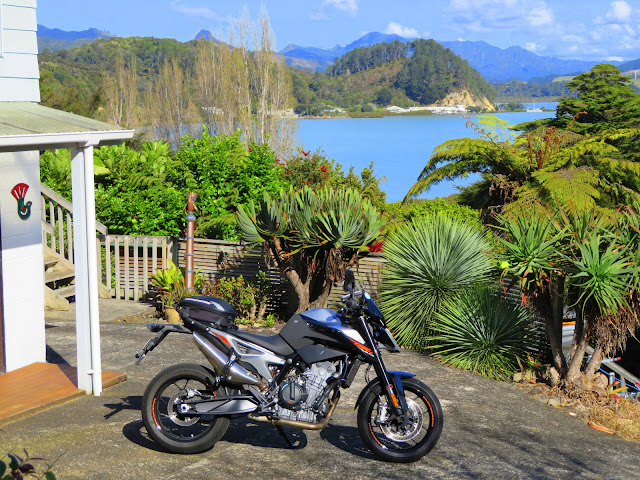 Ready for another adventure

I've had the KTM for around 7 months and have covered about 7000 km.  A lower monthly tally than usual but an overseas trip, crap winter weather and other distractions have all conspired against a bigger distance.  However, with spring having arrived, some decent distances beckon.

KTM's have a reputation for "edgy" performance and a few reliability issues.  I was well aware of this when making the choice but the emotional and fun appeal, not to mention blistering performance; over-rode these considerations.

I'm happy to report that although a few issues have been reported on the KTM 790 forum, I haven't experienced any significant problems and I love it to bits.  The ultimate accolade is that it gets patted when I walk past it in the shed.  That didn't happen with the GSX-S 1000. The Gixxer was a very competent bike but it just didn't light my fire.

As reported a few posts ago, the OEM pure sport tyres were fine before winter set in but were lethal in colder, wetter conditions. Just couldn't get them hot enough to work properly. They were ditched with 3500 km on the clock.  The Bridgestone T31 sport/touring replacements have been excellent in all conditions and should have a useful life.

Another minor issue was not the fault of KTM.  I purchased a French-made Acerbis flyscreen, principally for looks.  It works surprisingly well aerodynamically but has one serious downside.  The way it's mounted allows light from the headlight assembly to be reflected up the inside of the screen.  It's not really noticeable in daylight but riding at night, the reflected light is a serious and dangerous distraction.  Presumably, the French designers never ride in the dark!  I solved this by spraying the inner face of the screen matte black and also added some tape to the top of the headlight assembly which is covered by the bottom of the screen. 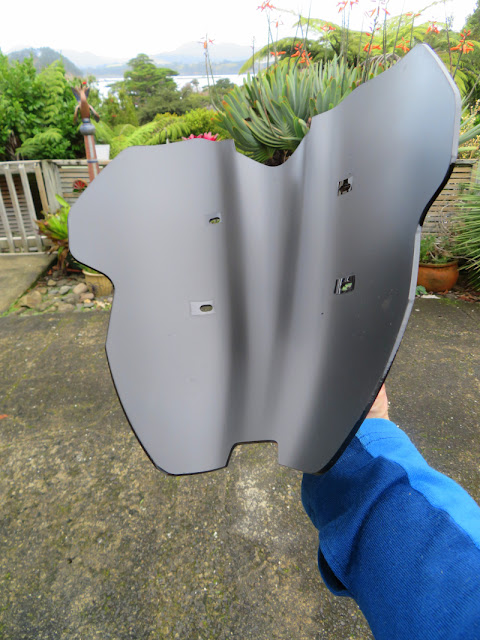 Matte is the new black

Another non-serious but irritating issue has arisen in the last few weeks which may partially be due to the way I ride and partially due to the materials which KTM uses.  I began to notice that when slowing towards a stop from slow speeds, e.g approaching a stop sign in town, the front brakes were slightly "juddery" when constant light pressure was applied.  It was as if they were braking and then releasing fractionally for every part rotation of the wheel.  The first thing I checked was for rotor runout or warping and there was none.  Closer inspection showed that the disc surfaces had a partially glazed uneven appearance, something I hadn't experienced on previous bikes.  This can just about be seen on the next photo - darker uneven strips. 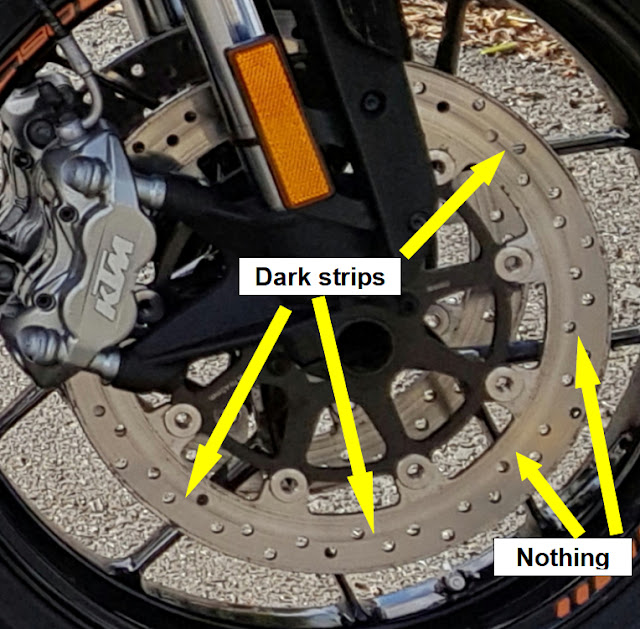 I tend to be very light on the brakes during normal road riding, using a combination of throttle and gear selection to moderate my speed in combination with reading the vanishing point in corners.  I wondered whether the light use of brakes had a polishing effect but as mentioned earlier, it wasn't something I'd previously experienced.

I mentioned it on the international Duke 790 forum and bless his heart, another Kiwi from Taranaki mentioned that he had experienced similar problems on the Ducati Multistrada which he once owned.  His take on the issue was that it could be cheaper materials (or perhaps mismatched disk and brake pad materials) and the componentry needed some sustained heat in them right from the start to avoid the problem.  He solved the matter by breaking the glaze with 400 wet and dry paper on both the disc faces and the pads, then getting some sustained heat into the assembly.

I did exactly the same, wet-sanding the disc faces with 400 paper on a block and dry sanding the pad faces in a figure of 8 pattern on a flat surface.  All surfaces were then thoroughly cleaned with brake cleaner.  Total time to complete the job was a shade over 2 hours. 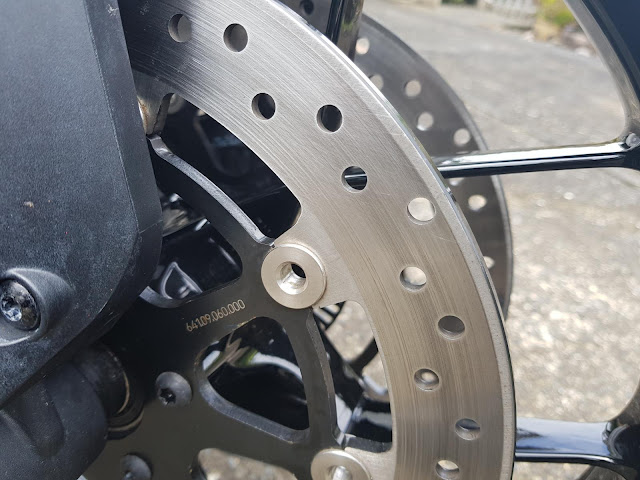 I then went out to a largely deserted straight bit of road near home and did a series of high speed stops to get the brakes really hot.  I then rode home and tried some low speed gentle stops - yippee, no more symptoms!  The following photo shows a nice, even discolouration across the disc face - quite different from the previous markings. 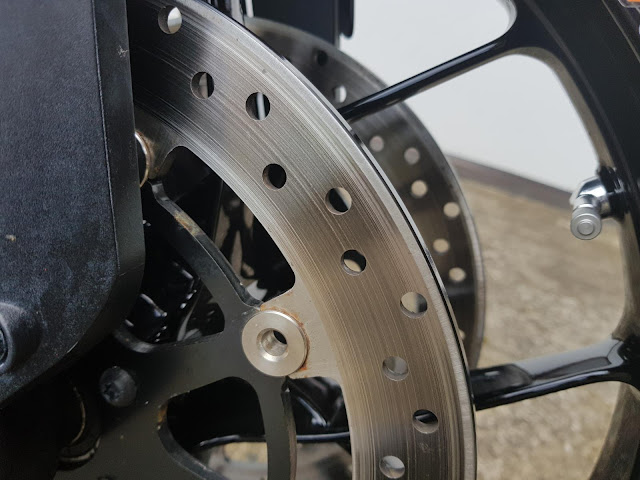 There's always something new to learn and the internet is especially good for great ideas and great people when there's a problem.  If it ever happens again, I know how to tackle it!  In a wee while, I'll be replacing the OEM pads with my favourite EBC HH type.  It will be interesting to see how these work.  I've had them on my last 3 bikes and they've been far superior to the OEM ones in terms of stopping power and feel.

I've also just celebrated my 72nd birthday - pretty pleased to still be indulging in the lifelong passion of riding a motorcycle.  All the upskilling over the past 8 or 9 years appears to have paid off - still feel safe riding at a reasonable clip. 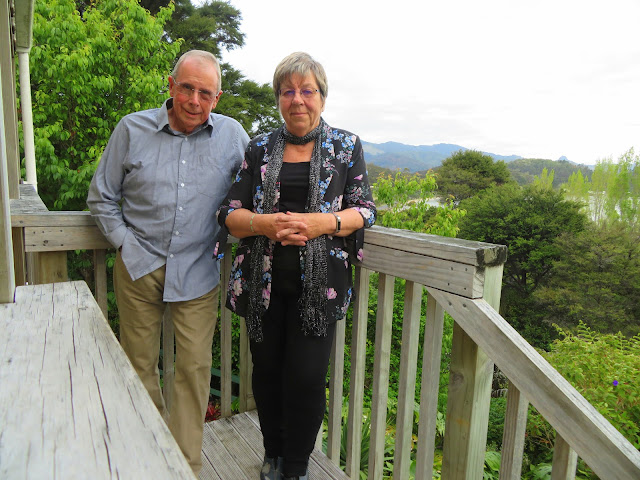 Hot chick taking me out for a birthday dinner!

Two summers ago on a particularly hot day whilst dressed in full leathers,  I suffered a bout of heat exhaustion.  It was an extremely unpleasant and debilitating experience.  By the time I got home, I had a blinding headache and was feeling extremely nauseous.

I have no wish for a repeat and when Jennie asked me what I wanted for my birthday, a mesh jacket to allow better cooling sprang to mind.  Many brands offers jackets without a liner.  Fine for guaranteed hot days but less so for changeable conditions or early morning starts and late evening finishes. Some with liners are just windproof and others waterproof.  The other thing to consider is the grade of armour that jackets come equipped with.

After much poring over specifications I decided on the black Rev’it Tornado 2. Tough construction (1000 and 750D shell), CE level 2 armour (shoulders and elbows) and a detachable thermal liner and membrane.  Back armour is not supplied as standard on the jacket to allow for choice and I went for a CE level 2 Seesoft protector. The jacket will also take a Rev’it cooler vest. 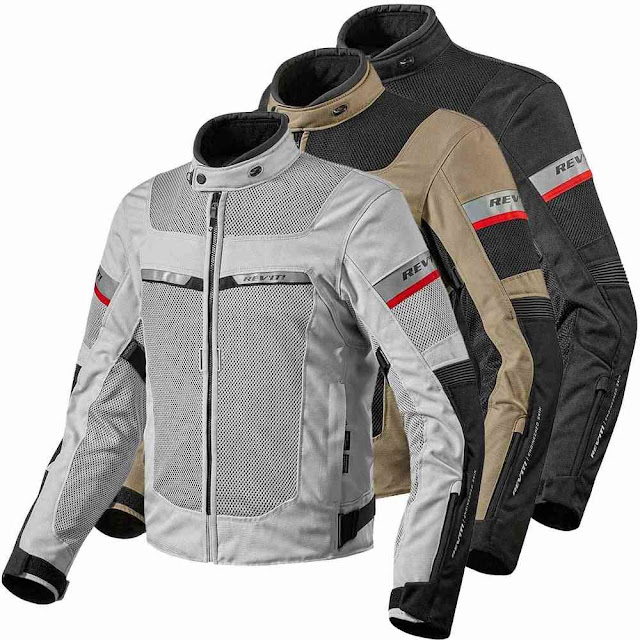 The Hydratex thermal liner and membrane is fine for those cooler spring mornings.  I haven’t tried it in the rain but assume it’s “showerproof” as opposed to continuous heavy rain.  Not critical as I have a lightweight Spidi nylon jacket to slip over the top in adverse conditions.

A further selling point for me is that the detachable liner is styled to wear as a casual “bomber” jacket.  Perfect for end of day wear when on tour and travelling light. 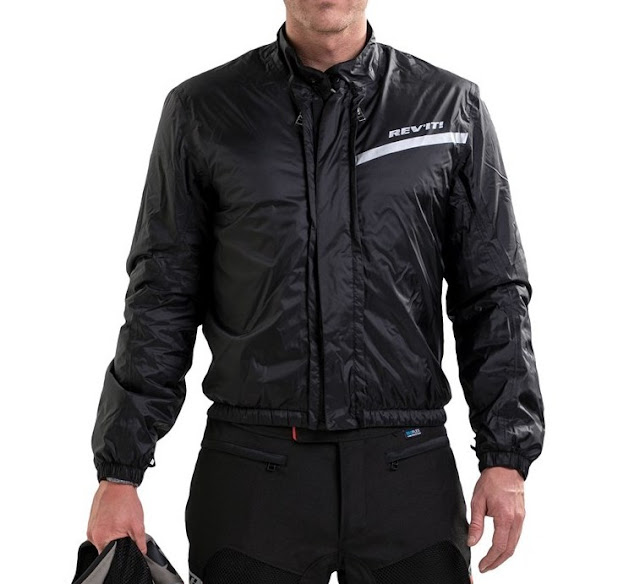 The Tornado 2 will set you back around NZ$500 depending on supplier, plus another NZ$70-odd for Seesoft level 2 back armour.  Maybe some matching pants for Christmas……..

Yesterday saw some of the members from our region of the Institute of Advanced Motorists get together for a social ride.  Our region covers close to 40,000 sq km so we tend to hold our social runs in different parts of the region to give everyone the opportunity to socialise.  Yesterday, I was responsible for leading the ride on the southern part of the Coromandel Peninsula (my own backyard, near enough), so only covered about 400 km door to door.  Actually, I hate group rides with people I don't know as there are invariably some clowns who disrupt the ride and put everyone on edge. However, when everyone is trained to the same standard, it's a rather different proposition.

The weather was perfect at around 20 degrees C and traffic was light, being the weekend before a public holiday long weekend when it will turn to custard.  Rides like this are genuinely good for one's mental state, or soul if you prefer. 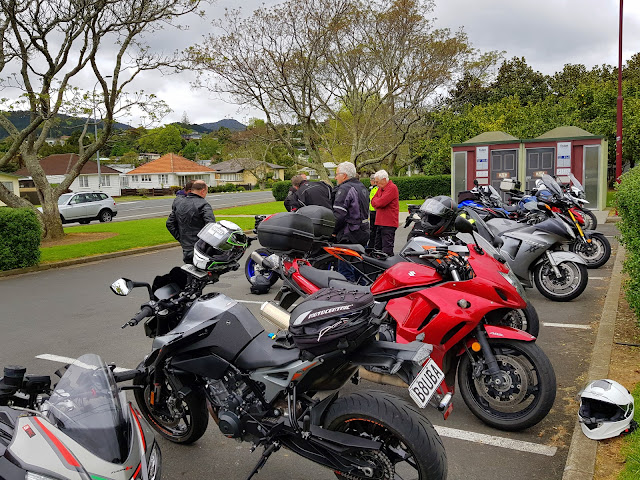 Assembling in the town of Paeroa 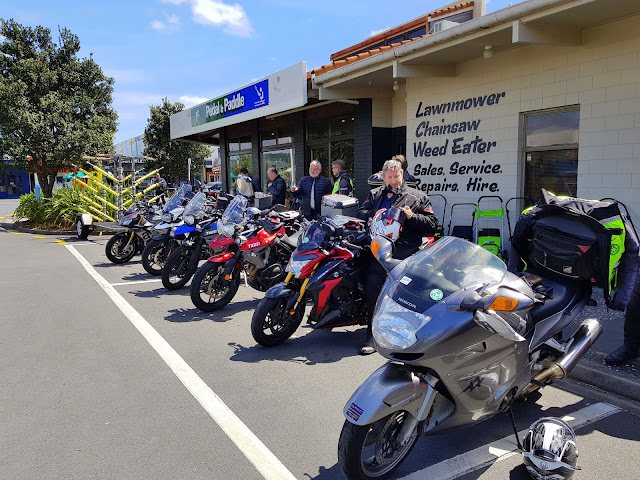 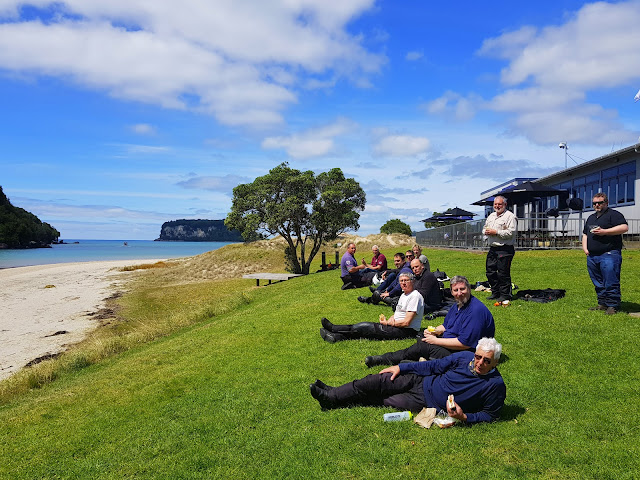 Not a bad spot to eat lunch - Whitianga Harbour

Finally, nothing to do with motorcycling. A couple of decades ago, I used to sail at national championship level and have retained an interest in sailing.  Interestingly enough, motorcycling, sailing and flying all require much the same skill set.  Anyway, New Zealand are the current holders of the Americas Cup, the world's oldest sporting trophy.  They last won it in foiling catamarans which were an outrageous design and could sail at over 40 knots.  For the next Cup in 2021, NZ have specified a 75 ft monohull, but one which foils and will supposedly reach 50 knots - even more outrageous!

The USA, Britain, Italy and NZ have all recently launched their prototypes and have begun testing them.  The NZ yacht Te Aihe (The Dolphin in translation from Maori) has been testing on Auckland harbour and looks absolutely spectacular, if not somewhat bizarre.  My favourite photo below. 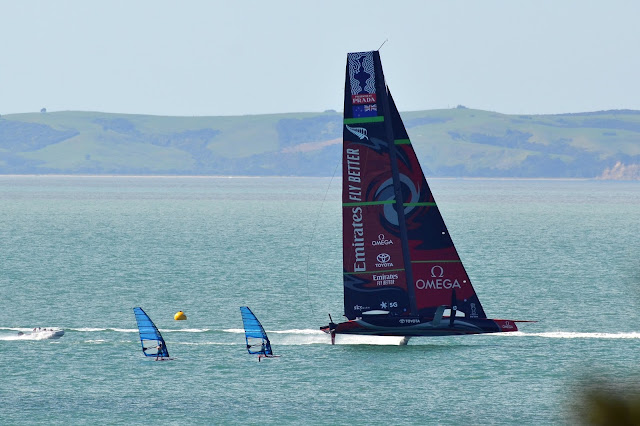