Colin Seeley was a highly successful British sidecar racer back in the 60's who subsequently gained international fame for building frames for race bikes which were light but produced better handling than virtually anything else available at the time.  He was also associated with Brabham race cars in the 1980's because of his reputation.

He built an ultra lightweight and physically tiny 500cc Matchless G50-engined race bike for well-known UK racer Dave Croxford to campaign for the 1971 season.  As an aside, I was living in the UK at that time and regularly went to the various races so must have seen it, although I have no specific memory of the bike.  Although the competitiveness of British singles was on strictly borrowed time against Japanese and Italian bikes, Dave Croxford and the Seeley had some epic battles and wins against them on the short circuits.  A good example of power to weight ratio and sublime handling.

Jumping forward to late 2020 to continue the story, UK auctioneers Bonhams; were auctioning a parcel of rare and classic bikes.  My mate and fellow Coromandel resident Paul successfully races a Norton 850 and he saw a Laverda Jota among the auction offerings as well as the Seeley.  The auction was in the middle of the night NZ time but Paul sat up and joined the on-line bidding.  The Jota went for far more than Paul was prepared to pay but for some unknown reason, he was the only bidder for the Seeley and got it at an excellent price.

Unfortunately and no thanks to Covid, there was a substantial delay in getting it shipped to NZ.  When it eventually arrived, Paul had it sent to the company which prepares his Norton racebike for a ground-up rebuild. The engine was pretty tired and needed TLC.  By way of example, those big singles used to vibrate and the frequencies caused cooling fins to fail.  The photo below shows broken fins and evidence of past repairs. 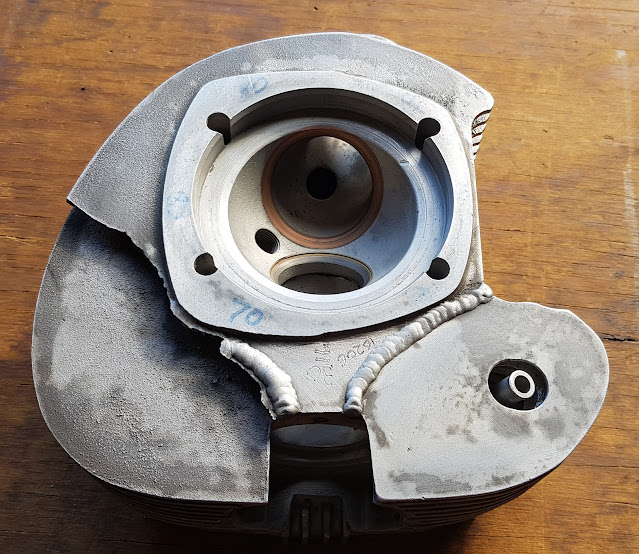 No mucking about, a new cylinder head was fitted and plastic wedges between the fins to dampen the vibrations.  Note the gold painted camchain cover.  It protects the lightweight magnesium alloy from corrosion.  The gearbox is also painted for the same reason. 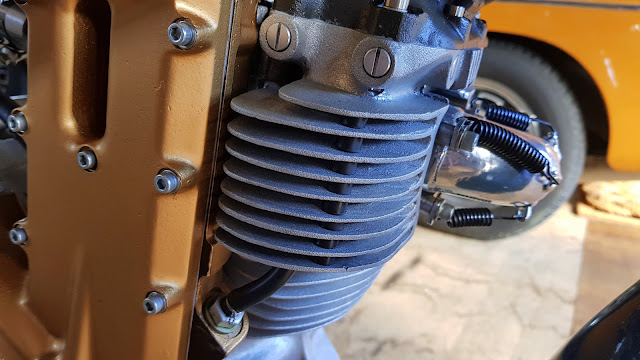 Vibration dampeners between the fins

After the extensive rebuild and a repaint, Paul has only just received it - well worth waiting for as the photos below show - it's now flawless!  Yesterday, Jennie and I dropped in to see it and what a beauty it is.  It's absolutely tiny, presumably to reduce frontal area as well as to improve power to weight ratio.  The bottom half of the fairing has been removed in these photos, just for access to the engine. 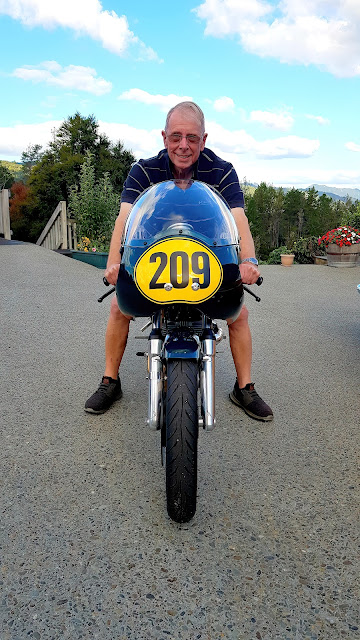 Here's a short clip of Paul starting it on the rollers.  It's a sight noisier than the video shows!

It's almost a case of serendipity as Paul met Colin Seeley when he came to a NZ classic race meeting in 2012 as a guest of honour.  He will keep racing his Norton and just demo the Seeley at classic meetings.  Isn't it just great that there are people like Paul who keep history alive and kicking?  For the nerdy amongst us, the info below was taken from the Bonham's auction site.

1971 SEELEY 499CC G50 MARK 4 RACING MOTORCYCLEFRAME NO. MK4 CS EXP 152
• Prototype Seeley Mark 4• Raced by Dave Croxford during the 1971 season• Present ownership since circa 2009• Fully restored 2009-2011• Offered from an important private collectionMany-times British sidecar champion Colin Seeley bought Associated Motor Cycles' racing department when the company went into receivership in 1966. The previous year he had constructed the first Seeley racing frame to house a Matchless G50 engine, and the AMC purchase enabled him to produce complete Seeley G50 and 7R machines. With their improved frames, the ageing four-stroke singles enjoyed renewed competitiveness, Dave Croxford winning the British 500 Championship on a Seeley G50 in 1968 and '69."Our association with him over two years had been just brilliant," recalled Colin in the first volume of his autobiography Colin Seeley Racer ...and the rest. "Dave was a real trouper and an entertainment on and off track. He had achieved so much in two seasons, winning races, circuit titles and two British 500cc championships on his Seeleys. Croxford's contribution to the Seeley Racing Company was considerable."The Seeley frame progressed from the duplex cradle original to the similar but lighter Mark 2 before the down-tubes were abandoned with the Mark 3, the headstock and swinging arm pivot of which were linked solely by tubes running diagonally above the engine. Introduced in May 1971, the Mark 4 featured a revised tubing layout and continued in production until 1973.Having enjoyed what by his standards was a rather disappointing season riding Yamahas, Croxford returned to the Seeley team in time for the 1970 August Bank Holiday meeting at Oulton Park to ride the prototype Seeley-QUB and was back in the Colin Seeley Racing Developments team full time for 1971. His first race was at the Transatlantic Trophy meeting at Brands Hatch riding the prototype Mark 4, the machine offered here. Colin recalled: "For the 500 race Dave Croxford came to the line with my new Mk4 Seeley G50, painted in a striking colour scheme of red, orange and black." Croxford scored a sensational debut win on the new Mark 4, pipping Gus Kuhn's Charlie Sanby on another Seeley. However, by this time over-bored Yamahas were beginning to assert themselves in the 500 class and wins would be ever harder to come by. When Seeley and MRD (parent company of the Brabham Formula 1 team) agreed to merge at the end of 1971, the Seeley motorcycle racing team was stood down and Croxford was left unemployed, though he swiftly found another job as Peter Williams' team-mate at John Player Norton.
Posted by Geoff James at 12:24 6 comments: