Tyre time and other stuff!

If anyone remembers my original ramblings about tyre selection, tyre life and the review of the Michelin PR3 and PR4 tyres (HERE), one of the things I commented on was the difference between sport and sport-touring tyres.

The OEM tyres fitted to the GSX-S 1000 are Dunlop D214's - 120/70 x 17 up front and a 190/50 x 17 rear. They're a pure sport tyre and never was there a more graphic example of a soft compound tyre in that I've completely stuffed them in 3700 km! Given that this was road riding with no track days and that I cover at least 15,000 km annually, the bike would be forever in the tyre shop and Jennie would be less than pleased at the expenditure! Hate to think what the life would be like if I had the traction control turned off. 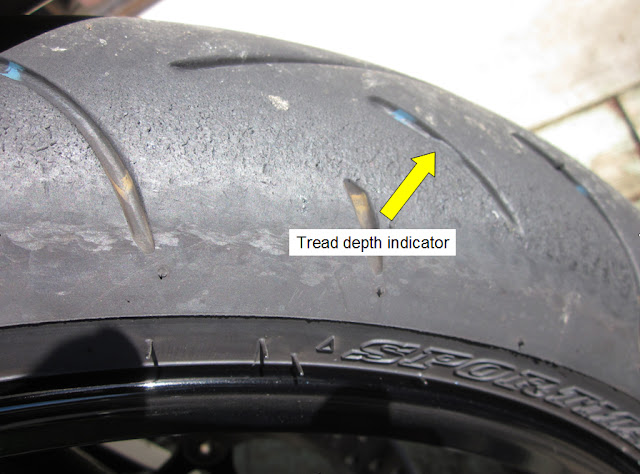 Front tyre almost down to the depth indicator 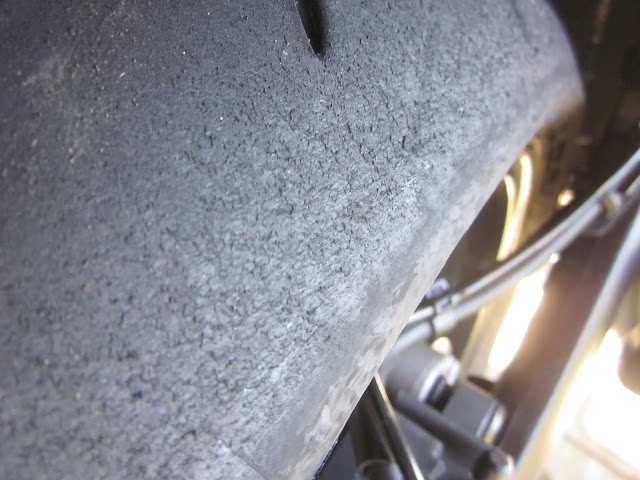 That's only part of the story though.  Whilst the D214's gripped well in hot, dry conditions, they were unpredictable in the wet when it was harder to get heat into them.  Even with the traction control set in wet weather mode, I always had the feeling that the bike was just waiting to dump me on my arse with one false move in wet conditions.

So it's back to my favourite all-weather tyre, the Michelin PR4.  I never ran out of grip on the Street Triple even in the most horrendous wet conditions.  In the dry, I ran out of talent before they looked like letting go and if they give me somewhere in the region of 8000-10000km on the GSX-S, that will be absolutely fine.

A ride up to Auckland in perfect conditions to have the PR4's fitted and here they are: 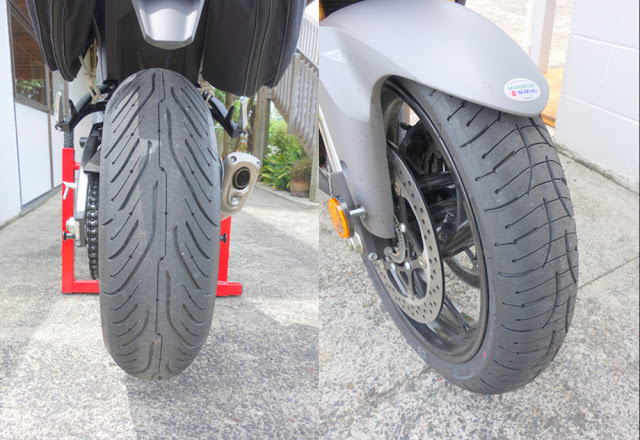 The OEM Dunlops were a bit sluggish on the turn-in when changing direction rapidly, at least compared to my Street Triple.  After some internet searching and a discussion with a Hayabusa owner (thanks Rob!), it was thought that the steering could be made a little quicker by replacing the 50 profile Dunlop with a 55 profile Michelin which has a steeper crown.  The photo below shows where the differences are.  The cardboard template was made by me when the D214's were almost new. (Yep, I really AM that anal)!  It can be seen that the PR4 is is less full (or pointier if you prefer!).  Riding home, the direction change was far better, requiring less countersteering to get the same result.  Of course, new tyres always feel better than old ones but the change in profile would have also contributed significantly.  The other interesting difference which may help with turn-in is tyre width - the PR4 is approximately 7 mm narrower than the D214 although they are both 190's. 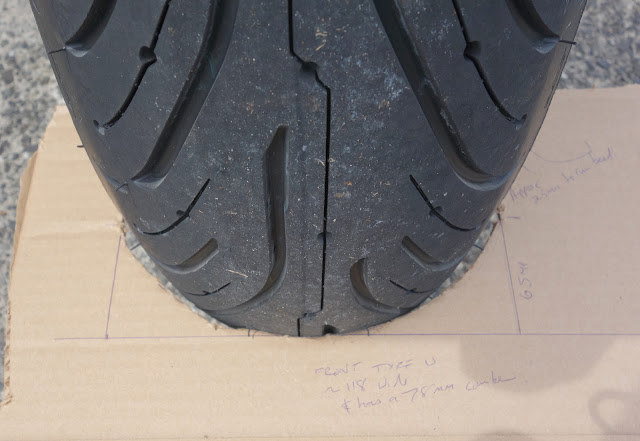 On reaching home, the other job was to check front/rear wheel alignment with the home-built laser rig which has been used on all my bikes since 2003 (see HERE).  Haven't done it since owning the Suzuki so had to adapt the laser holder for the Street Triple.  Here it is: 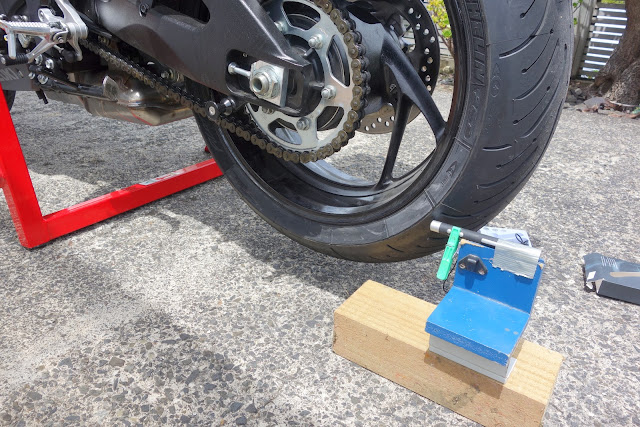 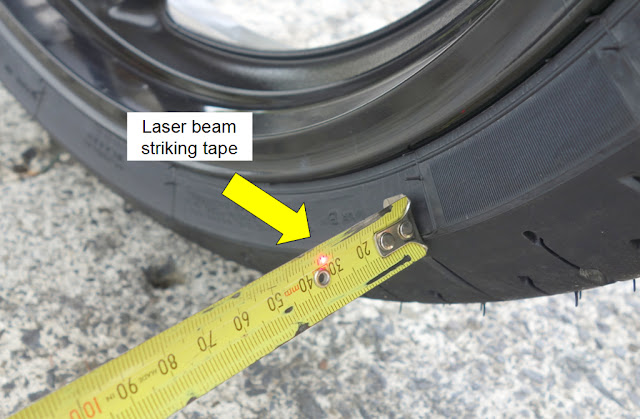 Sure enough, the front and rear wheels were out of alignment by rather more than I was happy with.  There are many reasons for misalignment which would fill a post by itself but having accurately measured the misalignment, I was then able to quickly reduce it to about a 4 mm offset with both wheels parallel.  That's probably quite satisfactory in the scheme of things.

Finally on things automotive but not bikes, it's the end of another era.  Jennie has owned her Special Edition MX5 since late 2007 when we imported it directly from Japan.  Only 3000 Special Editions in that colour were available worldwide and we were lucky to get one in mint condition.  It's been kept in that condition and has only racked up 47000 km.  Fellow moto-blogger Sonja got to drive it when she was visiting NZ. However, Jennie has found the driving position less comfortable in recent times so the decision was reluctantly made to part with it.

We advertised it on the NZ equivalent of eBay and were blown away with the interest - inundated with phone calls and emails for several days from all round the country!  The first person to see it bought it and we were delighted for the young man who drove for 3 hours and made it to our place first. He'd done his homework and was clearly an enthusiast. 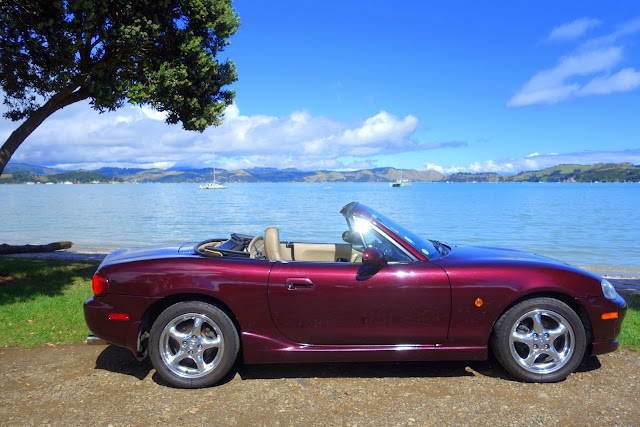 For the replacement, the two main criteria were that it had to have a comfortable driving position and have decent performance.  Or as Jennie said to our daughter "DEFINITELY NOT A GRANNY CAR"!  After much perusing of specifications and a 2 hour test drive, she fell totally in love with this: 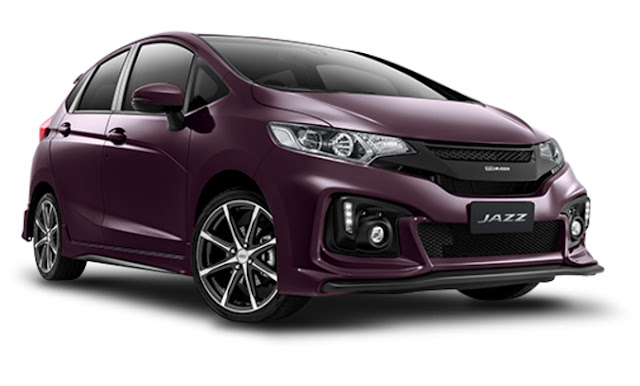 Couldn't keep the grin off her face. She's ordered one in a similar colour to the MX-5 and it will be here in a few days. Not only has it got a surprising amount of grunt, it corners like it's on rails thanks to traction control and a whole load of additional electronic aids.  Must say that I was impressed too.  Thanks to the clever folding seat arrangement, it's got more useable carrying capacity than my RAV4.  Guess the same conditions will apply as per the MX-5.  If I want to drive it, then I have to keep it clean and polished!  Wonder if it's a good time to ask for new leathers?

Addendum:
Since this post covering tyres, there has been a review of the Metzler Roadtec 01 HERE , fitting Michelin Road 5's HERE  and Bridgestone T31's HERE and HERE
Posted by Geoff James at 11:07 10 comments: