I stopped riding motorcycles on my own terms in March as the time felt right for a bunch of reasons.  It was made much easier because of other fallback interests.  Having turned 75 in October, maintaining fitness is a significant consideration.  I enjoy generally good health apart from damaged knees from old sporting injuries.  Walking any decent distance  is problematic but cycling is good for them.  The next step in cycling enjoyment and to walk longer distances in comfort is to hopefully get a knee replacement 2023.  Not exactly looking forward to it but it should help in the long run. One issue is that (to use a colourful phrase) there is bugger-all flat land where we live and some serious hills which are an almost insurmountable issue on my 30+ year old road bike.  Hence the purchase of an e-mountain bike in June to help with the hills and also to ride on many of the off-road trails in our region (but not the challenging ones). 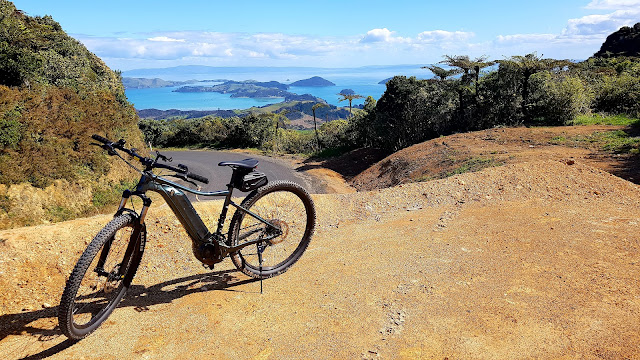 Riding the MTB has been a lot of fun and as fitness has increased, reliance on the higher power options has decreased apart from a few killer climbs.  It's enabled access to places never previously explored.  With the better weather here, more off-road riding awaits.

A broken rib (blush) and Covid meant no riding for 6 weeks, plus the occasional burst of winter weather but a few days ago, a milestone of 1000 km was reached - yayy! 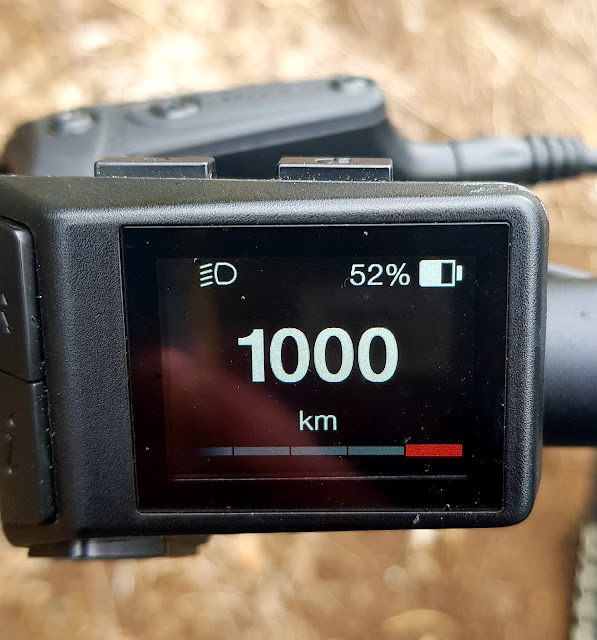 A decent milestone, all things considered!
Considering the minimalist plank that masquerades as a saddle, my arse has survived remarkably well, mainly thanks to a gel insert in the riding pants.  Haven't needed to use the camelback much for hydration yet but the water in the bladder tastes like it comes from a chemical plant.  Guess I should fill and flush a few times before I really need it.
Whilst cycle farkles are generally cheaper than motorcycle accessories, they're certainly not cheap.  In a nod to technology but mostly to look cool, I did fork out for a carbon fibre drink bottle holder.  Jennie just rolled her eyes and sighed in that manner which we males know so well. 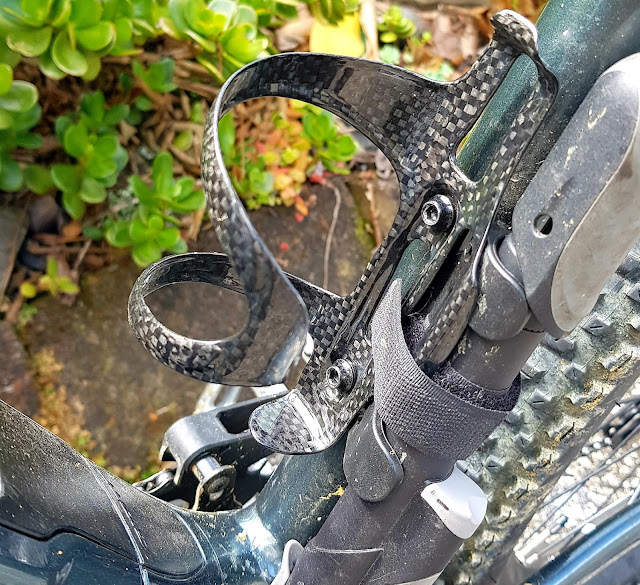 Overpriced but way cool carbon fibre drink bottle holder
The standard OEM flat pedals were small, serrated and generally uncomfortable.  I needed a bigger, better pair.  Our Australia-based daughter has surprisingly developed a love of cycling and for my birthday, gave me a voucher for a UK cycle accessory supplier she deals with, bless her!  Cool-looking high end pedals were duly ordered and they arrived last week. 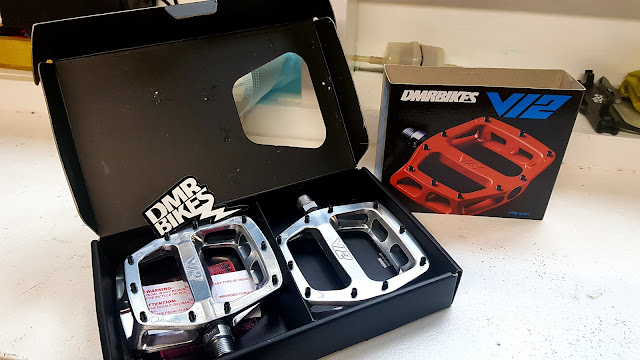 Everyone loves cool farkles
I didn't think that the change in comfort levels from swapping pedals would be so dramatic but it certainly is.  Better pressure distribution and superior grip.  It's still going to hurt if you rake your shin or calf down them if you slip off a pedal in an incautious moment but not as much as the serrated OEM versions.  Happy camper!
As well as road riding and the many gravel trails on the Coromandel Peninsula, a mountain bike park recently opened at Coromandel Town for use at no cost to riders - how neat is that?  All ages from small children to old farts like me are catered for with a sealed pump track, skills training area, jump track and official grades 2-4 cross-country trails. Link: Coromandel Bike Park . 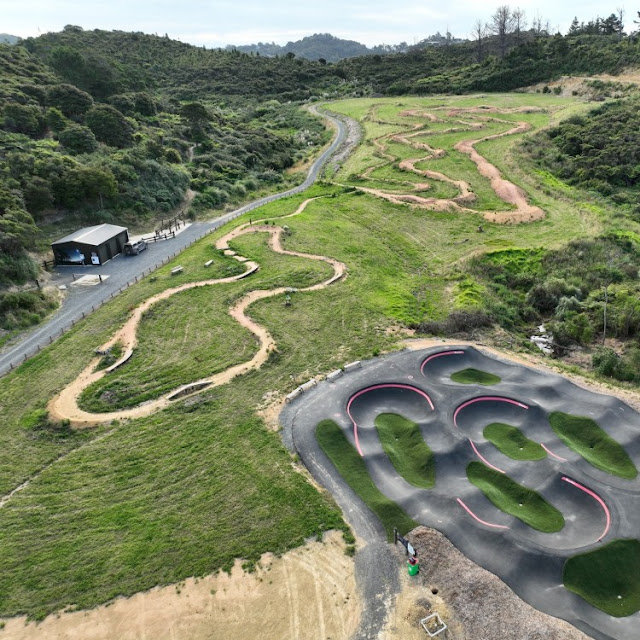 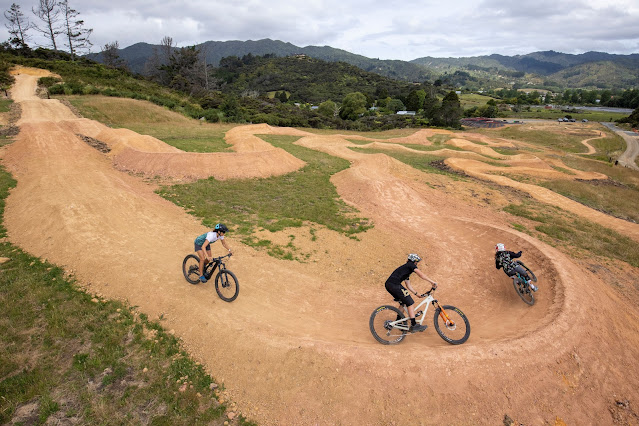 Fast riders having fun - I am not one of them (source: Ride Coromandel) 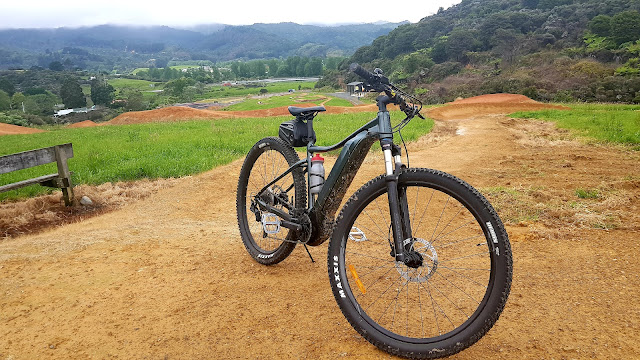 My trusty steed at the start of the Grade 2 trail
The bike park is less than 10 minutes from home. You will note that the photo above shows a deserted park which is the only time when I make an appearance.  With a skill level bordering on zero, I really don't need a 5 year old (plus parents) laughing at a spectacular face plant.  The grade 2 trail is just fine to sharpen my bike handling in relative safety.  Unfortunately, I recently took a wrong turn and ended up on a section of the grade 4 trail.  I didn't know this until unexpectedly facing a short, steep drop-off.  Trying to stop would have posed more risk than continuing, so shouting a profanity into the wind; I shoved my butt as far back as I could go and prepared for a world of hurt.  That I made it with no repercussions is thanks to Aussie blogger, mountain biker extraordinaire and motorcyclist Dave Hoswell of  A View From Above fame.  When I first bought the bike, Dave gave me some advice on body position which clearly got lodged in muscle memory.  Thanks a million, Dave! 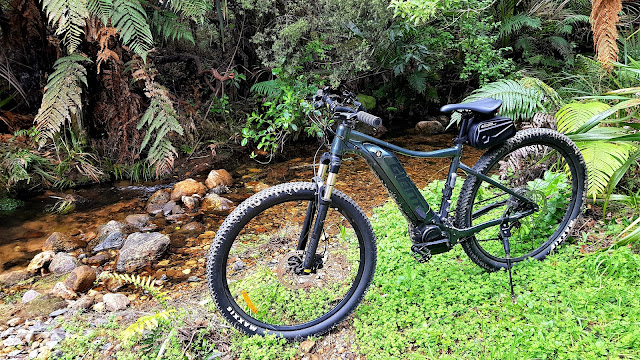