A day at the races

The 5 week layoff following eye surgery left me feeling a bit rusty and with a road trip coming up in a couple of weeks, a bit more riding wouldn't go amiss.  It just so happens that this weekend was the annual Classic Festival at Pukekohe, South Auckland.  That's a 280 km round trip from home, mainly on nice, twisty roads.  Skipped Day 1 but headed up on Sunday, leaving early as temperatures into the 30's C were forecast.

It may sound a bit odd but although I quite like the racing, I enjoy looking at the classic bikes even more from both an engineering viewpoint and as an art form.  There's no denying that the variety of design and colour really does make them an art form, at least to this motorcycle nut!  Then there's innovation and ingenuity in spades.  Something possibly lacking these days when bolt-on go-faster goodies are available from international sources.

The car park is always a great place to start as some spectators always ride interesting bikes to Pukekohe. 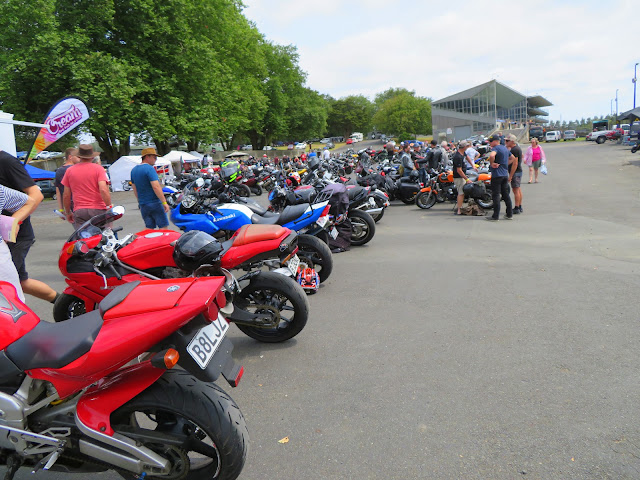 Spectator numbers building, even at an early hour

The photo below is of an early 80's almost original wire wheel Suzuki Katana, although according to an original owner standing next to me, it had a few small updates.  These were the Superbikes of that era and genuine wire wheel models are still highly prized. 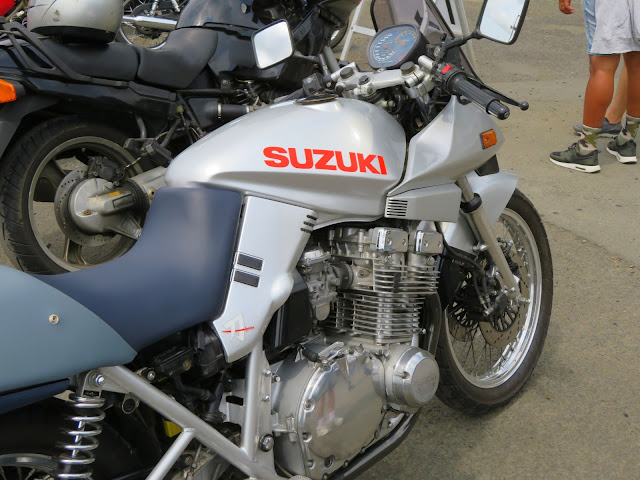 The ultimate superbike of its era - the wire wheel Katana 1100 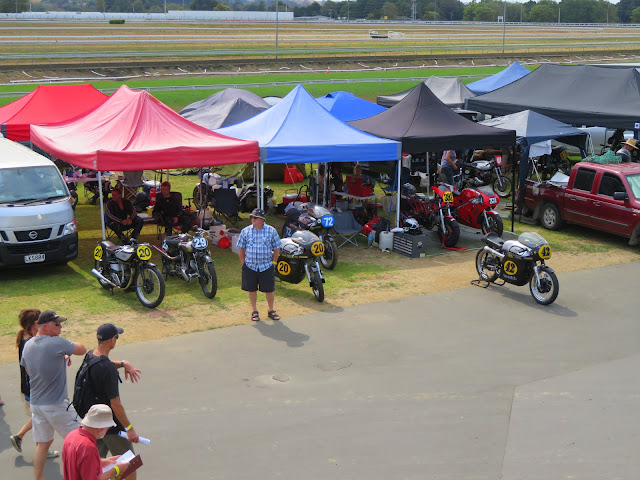 A tiny part of the pits - a real festival atmosphere

The pits are open to the public at no extra cost, creating a great atmosphere and although the racing is ferocious , everyone is chilled and friendly in the pits.  The bike below is one of several Ken McIntosh Suzuki's ridden to great success in the southern hemisphere by astrophysicist Dr. Roger Freeth.  Ahead of its time in terms of handling and is still competitive today.  Sadly, Roger was killed in 1993, co-driving for Kiwi Rally Driver Possum Bourne. 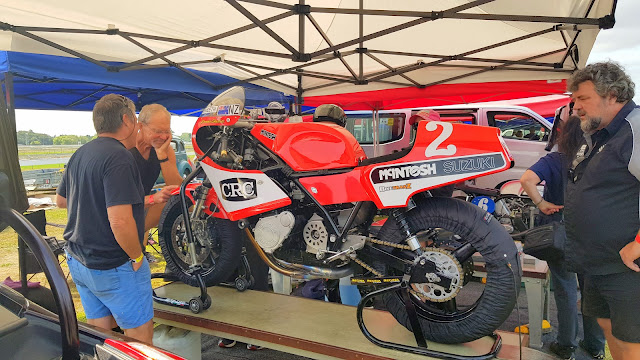 No classic meeting is complete without the appearance of the Britten 1000 superbike, designed by Kiwi John Britten.  Built from scratch and revolutionary in design, it dominated the world-wide BEARS series, also winning at Daytona.  Surely, this bike is the epitome of art form .  The Guggenheim Museum in New York certainly thought so, showcasing it as the pinnacle of motorcycle design.  To have two of them at Pukekohe was very special. 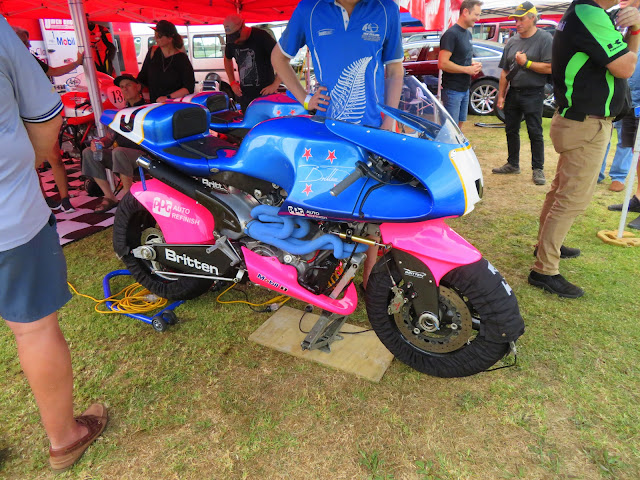 By way of contrast, I came across this ratty old rigid frame Triumph.  It would have been easy to overlook it but to me, it was also a piece of installation art because of its basic looks.  It could almost be called "Steampunk", but that would cheapen it. 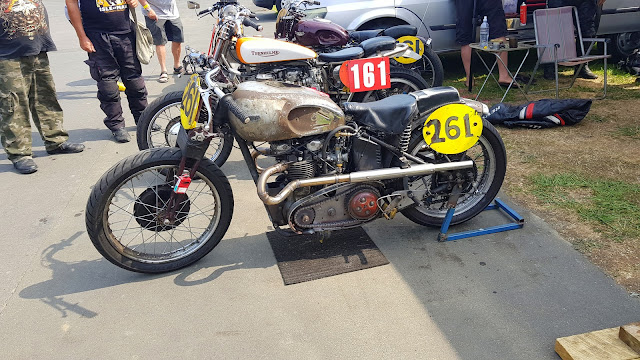 As an antidote to the streamlined modern-looking bikes, there were several entries owing their pedigree to the US-style flat trackers.  This Bonneville was a particularly nice example. 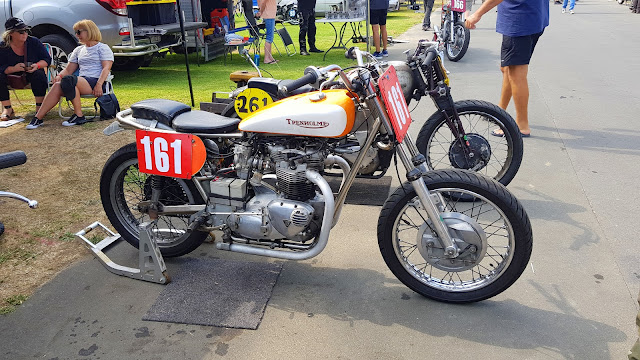 Continuing the "arty" theme, the next two photos are close-ups of a Harris-framed Suzuki with rainbow-hued pipes and the rear end of a very special Ducati designed by Paolo Tesio of Tex Design 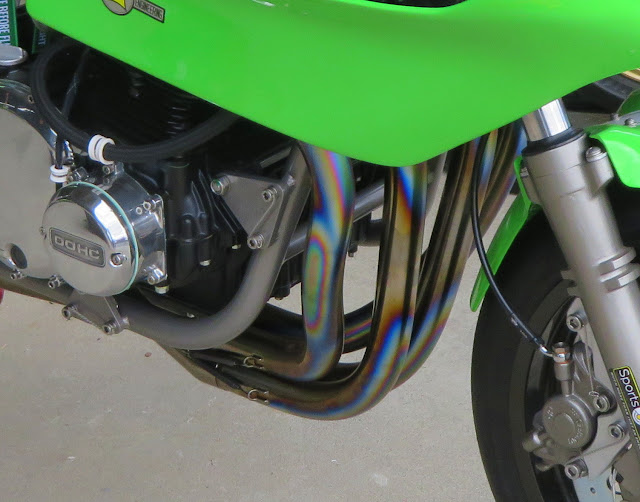 Interesting pipes on the Harris Suzuki 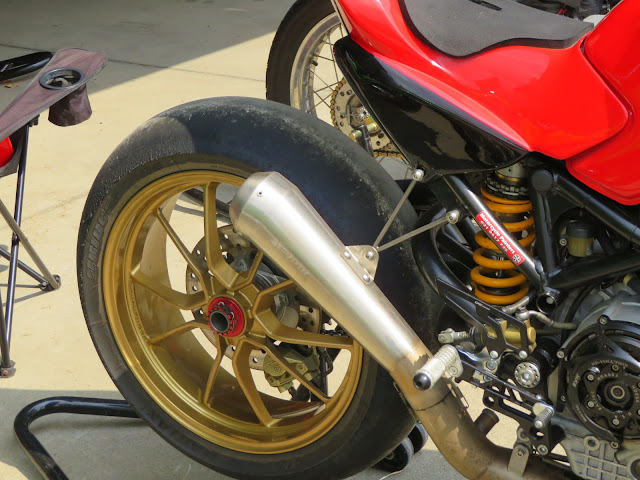 Magnificent detail on the Tesio Ducati 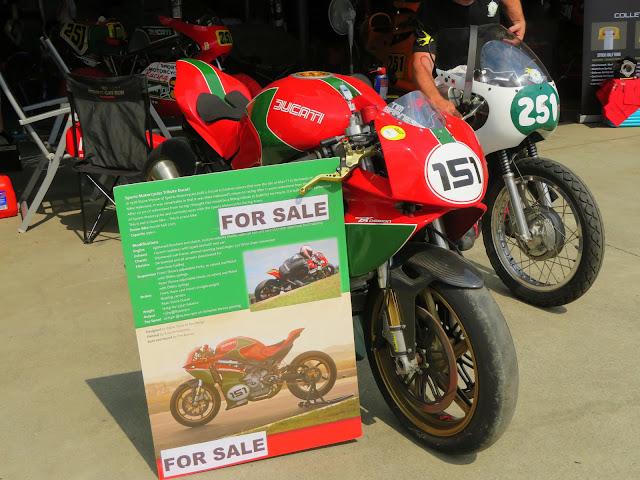 Here is the complete Ducati.  If you have to ask how much, you can't afford it!

The next bike is a beautiful Harley-engined race bike with a superb hand-beaten alloy tank.  I don't know the history of this bike although I think it's owned by someone from the US.  It has ex-Britten and Suzuki superbike rider Andrew Stroud's name on the fairing.  A great example of beautiful engineering. 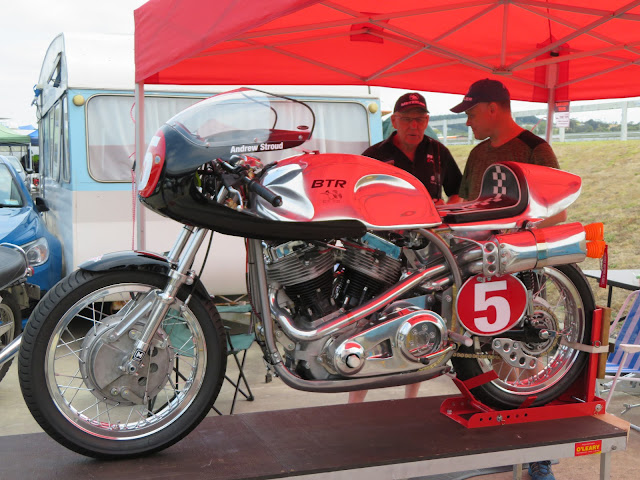 From a beautiful Harley to a downright ugly one!  A Harley-engined sidecar.  What it lacked in looks, it more than made up for it with its wonderful booming note down the grandstand straight. 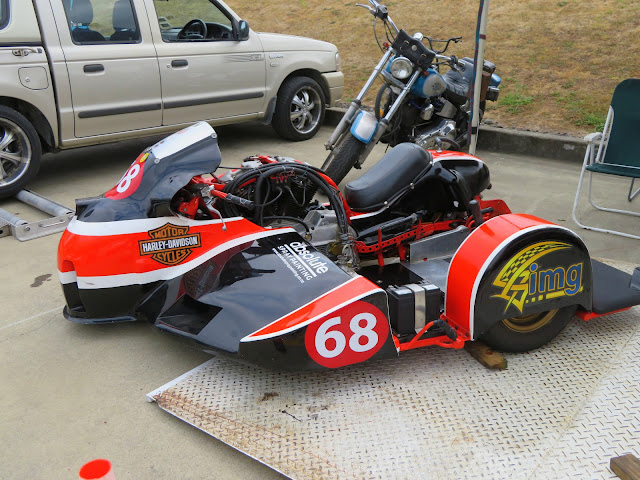 Only its mother could love it

Ken McIntosh has a world-wide reputation for building beautiful race bikes and in particular for Manx Nortons.  There were a bunch of them at Pukekohe, all looking like they had just come out of the showroom. 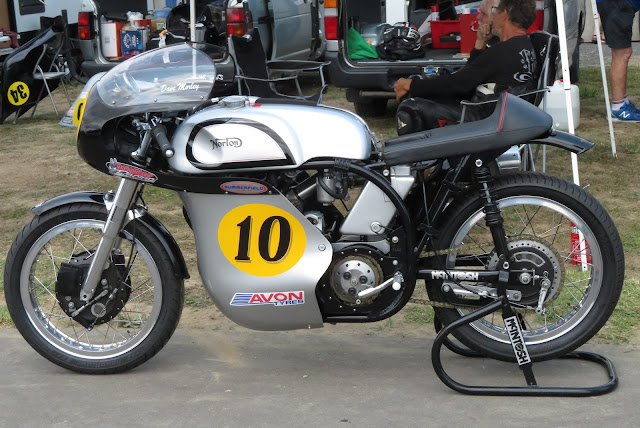 When it comes to design flair and colour, it's hard to beat the Italians.  This next set of photos shows a number of Italian racebikes, all in stunning condition and worth a king's ransom. 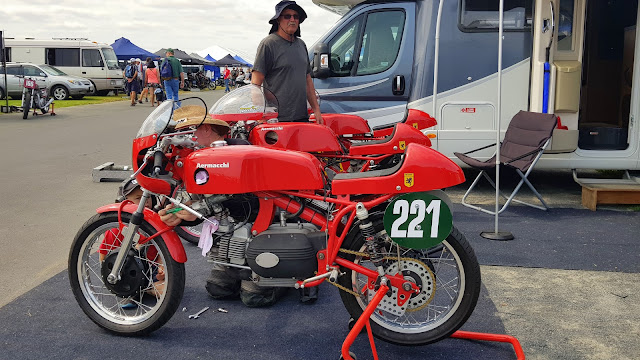 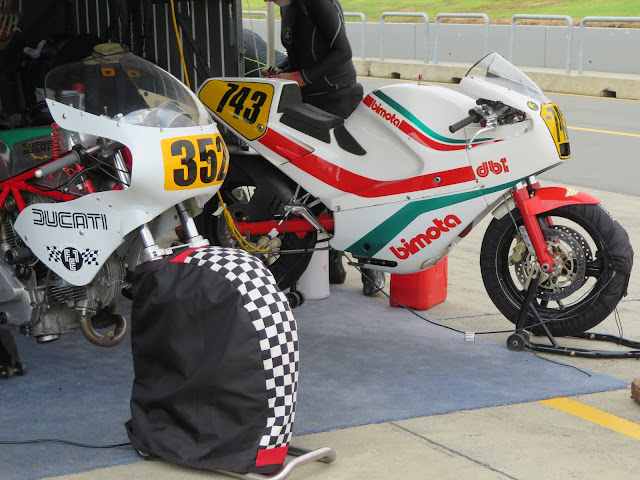 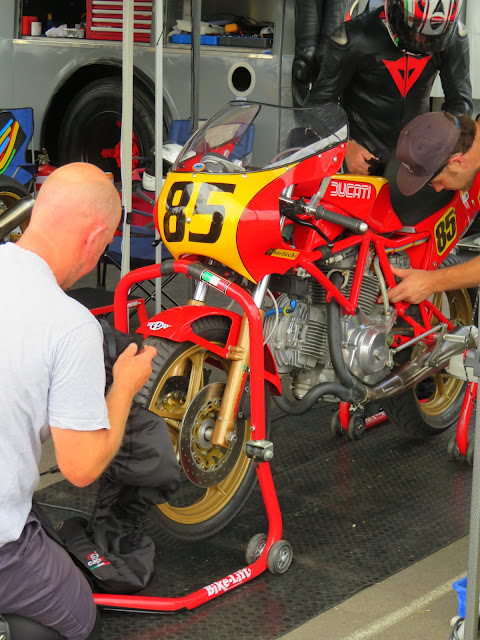 Colour and style - couldn't be anything but a Ducati 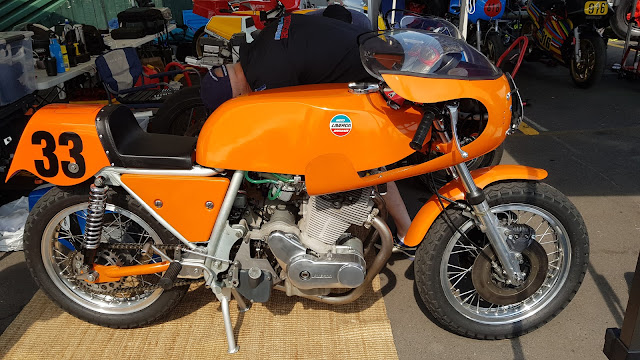 Another Italian name from the past - Laverda

Although there's no denying the beauty of Italian design, there's something about the brutal naked and sometimes faired Japanese Formula 1/Formula TT bikes of the 70's and 80's, raced by Graeme Crosby, Wes Cooley and co.  Real muscle bikes which took a lot of muscling round the race tracks of the world. 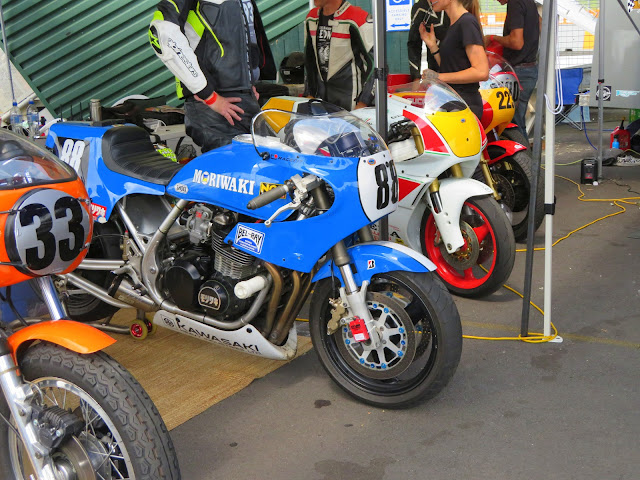 I could keep on adding photos but the foregoing ones are sufficient proof as to what a great event the annual classic is.  A real case of something for everyone.  To add to the classic feel, there was a great lunchtime display of aerobatics from a Spitfire and P40 from the nearby Ardmore Warbirds collection. 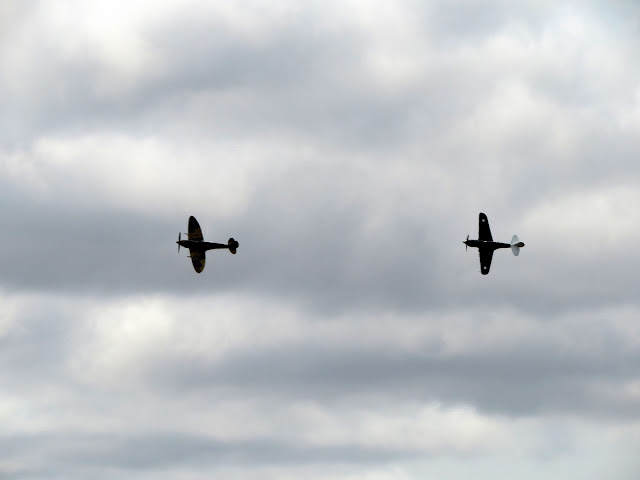 I left in the early afternoon with the temperature climbing well into the 30's C.   Too hot to contemplate wearing my leathers.  The armoured Rev'it mesh jacket which Jennie bought for my birthday worked an absolute treat.  However, even with the liners removed, my Gore-Tex pants were too hot, with sweat pooling in my boots.  Before next summer, time to look at mesh pants or kevlar armoured jeans methinks!

All in all, a fabulous day.  Rust duly knocked off my riding and a privilege to see some beautiful machinery from bygone years.  In many cases, the age of the riders matched their bikes although it certainly didn't show out on the track.  What a wonderful way of staying young!