Badass biking in the Cook Islands!

Jennie and I haven't been to Rarotonga in the tropical Cook Island group for 6 years but it's a nice warm destination for a short break, the people are lovely and the food is great. Flying time from Auckland is under 4 hours.  In fact, a great place to celebrate our 41st wedding anniversary and escape from reality!

Whilst waiting for our flight at Auckland airport, we noticed a NASA 747 parked outside the terminal.  Turns out that it's an airborne observatory which was using the clear air over NZ to study the Milky Way - cool! 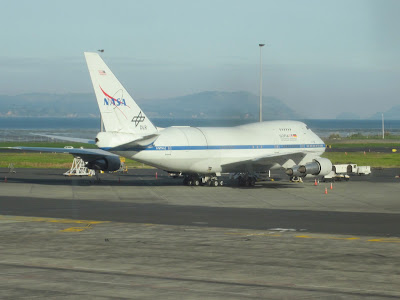 Accommodation in Rarotonga ranges from the basic to pretty opulent and we had a beachfront apartment at Muri Lagoon.  Certainly weren't disappointed! 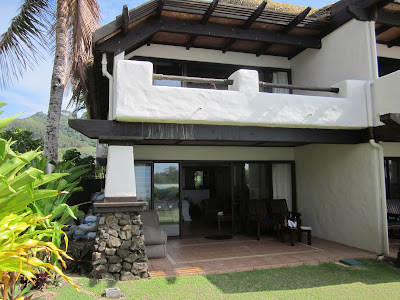 Tough, but someone has to do it! 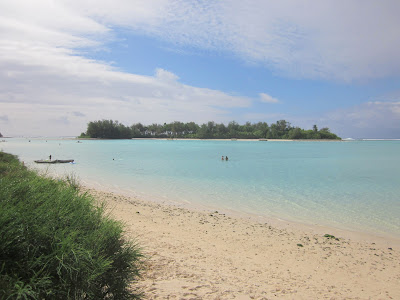 View from the apartment over the lagoon 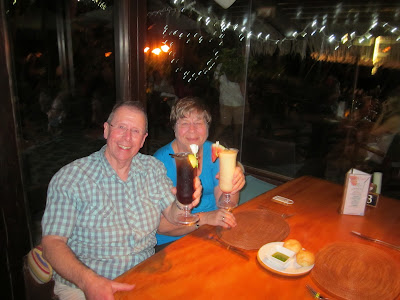 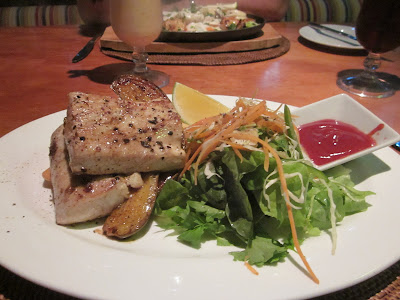 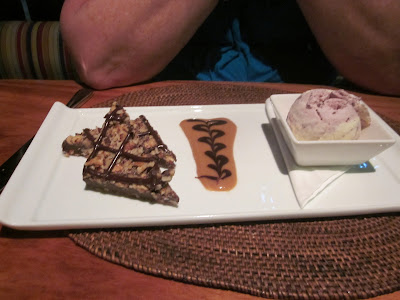 First priority next morning was to organise some transport.  Rarotonga has a maximum speed limit of 50 km/hr.  If you ride a motorcycle without a helmet (which seem to be practically non-existent), you're restricted to a (choosing the word carefully) theoretical top speed of 40 km/hr.  With these restrictions, hiring a scooter is just fine.  So is the hire price of just over NZ $15 per day!!

Rarotonga has a laid-back approach to getting your Cook Islands licence, which is more of an income generator than a demonstration of competence.  We hired our scooter at the apartment, but then had to ride to the police station some 20 minutes away to get a temporary licence.  No worries if you're familiar with riding on 2 wheels but guess it could be a bit dodgy if you haven't ridden before.  Suppose that if you make it to the police station in 1 piece, it proves that you're not totally incompetent!

Our steed was a Yamaha 125 scooter with auto transmission and surprisingly peppy, even 2 up!  Harsh words and the occasional clout from the speed controller on the rear seat prevented maximum top speed from being explored.  The Star-Trek gaudy layout of the instrument cluster had us calling it the Enterprise, even if I wasn't permitted to engage warp drive!

The bridge of the Enterprise 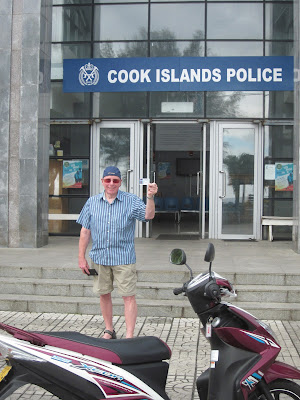 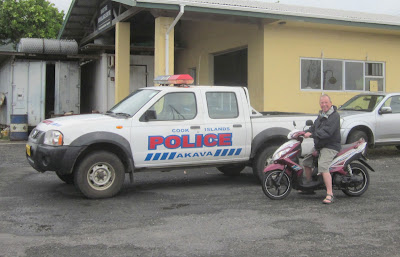 Poking the Devil with a stick and running away..... 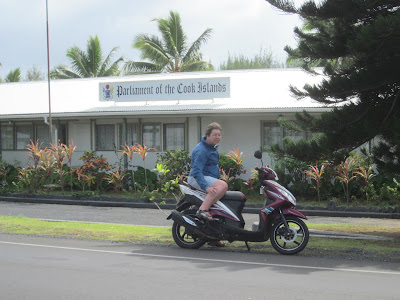 Parliament - they can hardly be accused of unnecessary opulence (or security)!

We'd done all the touristy things on our previous visit so this time, it was a case of exploring the island on the scooter, kayaking in the lagoon and just chilling.  One of the hallmarks of the Cook Islands is the wonderful fresh food, particularly seafood and a wide variety of fruits which we had for breakfast each morning.  Fruiting trees are literally everywhere. 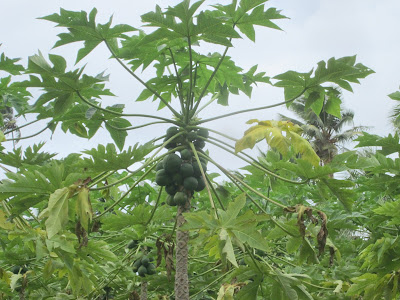 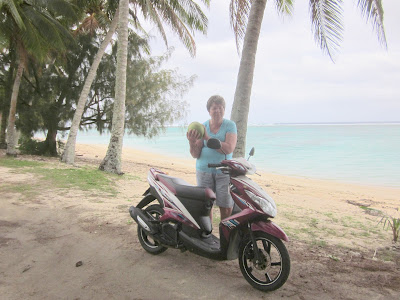 Stopping by the roadside and picking up fresh coconuts 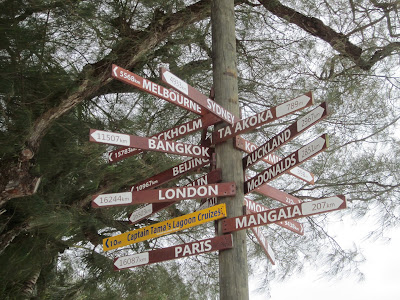 Even though it is winter in the Southern Hemisphere, the tropics still have plants flowering and busy growing everywhere - here are some examples: 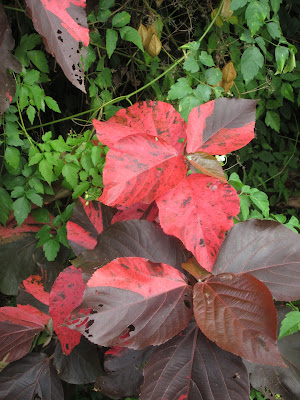 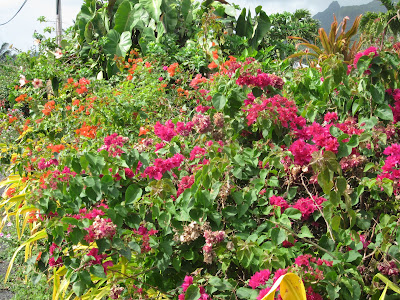 Although Rarotonga is a popular destination for Kiwis and Aussies looking for a mid-winter break, it's by no means overcrowded and there are lots of unspoiled beaches with no-one on them.  By sheer coincidence though, one of my riding buddies, Martin, was in Rarotonga at the same time with his partner Cindy to attend a wedding and it was great to get together for a meal and a few beers! 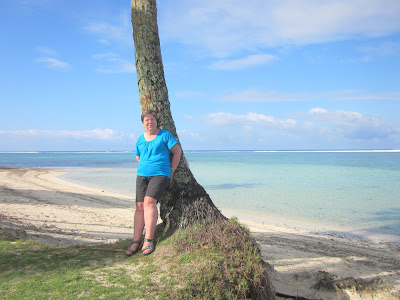 Two people, one scooter and that's the lot!


We had a short-lived tropical storm pass over the island.  When it first hit during darkness, we were about 20 km away from the apartment watching a live rugby match on a big screen in a village hall with the locals. It was still hosing down when we headed away and my protective gear of a shirt and shorts weren't a heck of a lot of use - soaked through in seconds although Jennie was hardly damp hunkering down behind me! At least it was warm.  It stopped raining in the early hours but it was still blowing hard in the morning and the kite surfers were having a ball on the lagoon.

These guys were REALLY motoring!

The Saturday market on the island is a big event, as much social as being there to buy all the local products on sale.  There was a bewildering choice of foods, clothing, plants and local crafts available and the Cook Islands drummers always raise the hairs on my neck - fantastic! 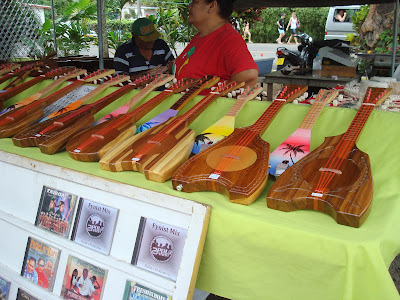 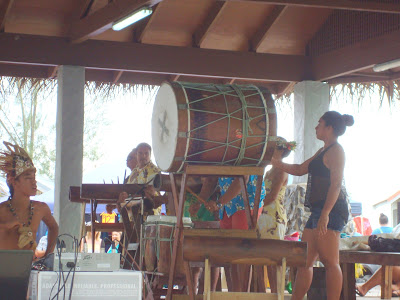 All too soon, it was time to head back to the airport and return to reality, but it was a wonderful break.  Hope you've enjoyed the introduction to a little corner of the South Pacific which is largely unspoiled with wonderful, unaffected local people! 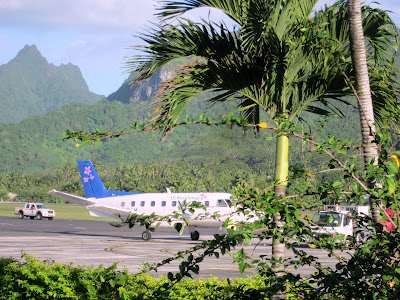 The airport on Rarotonga