One for the Engineers or Techos amongst us

It's 11 years since I retired and a lot longer than that since I practised as a professional engineer.  However, once an engineer........  (accompanied by eye-rolling from my long-suffering wife), I can't just jump on a bike and ride the bloody thing.  Can't shut down the need to know a lot more about it - mostly stuff that is relatively unimportant and irrelevant to most of the human race and normal, sane people.  However, when we meet up with another rider who has similar inclinations, just try and shut us up!  Lifelong friendships have been forged with less of a bond.

This post is predominantly for Lee - friend, fellow IAM member and ENGINEER.  He posed some technical questions in the comments section of the previous post.  However, anyone without technical inclinations is most welcome to skip it.  And if you're a female, I am immune to eye-rolling and exasperated sighs as I've had 47 years of it from my beloved!

Bike forums are often known for opinion without facts to back them up.  My immediate mental response to that sort of comment is a grumpy "Where's the evidence?"  However, a recent forum post was about instrument errors on motorcycles.  By comparing speedo readings with those on my GPS, I knew that the speedo on my GSX-S 1000 was 8 km/hr fast at 100 km/hr.  I was immediately curious about the KTM so set off on the day before Good Friday to have a bit of fun and collect some data using the GPS as a reference point. 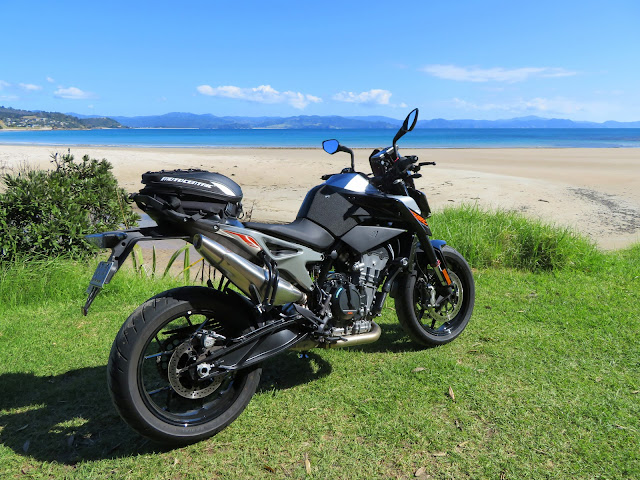 The KTM has heaps of information on its TFT screen and even more info in a whole series of drop-down menus.  I was particularly interested in the accuracy of the speedo, odometer and fuel consumption.  Fuel consumption is influenced by all sorts of factors, not the least being your right wrist so I just rode how I normally do, switching between Street Mode and Sport Mode depending on road and traffic conditions.  I wasn't all that interested in absolute consumption, just what the instrumentation was telling me compared with fuel actually topped up at the end of the ride and distance covered according to the GPS.  Sad and nerdy person that I am, it was quite interesting.  I need to get out more..... 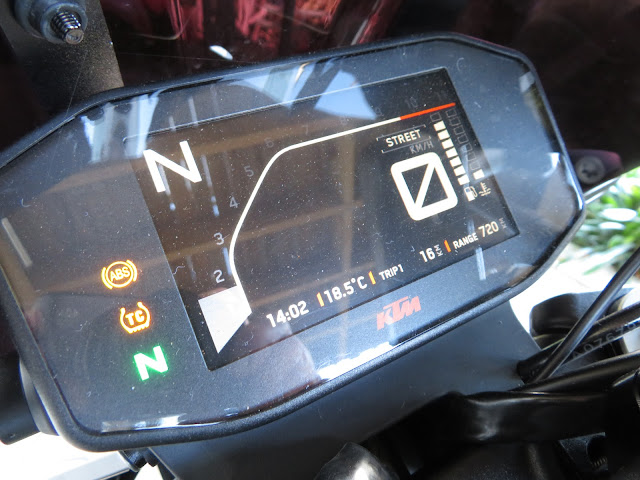 The main screen of the KTM
(The range isn't really 720 km, it changes as soon as you get rolling)

These are the readings from a 170 km round trip on twisty roads.  Bike instrumentation compared against my Garmin GPS.

Speedometer:  Reads approximately 5% more than the GPS and looks pretty linear from a series of readings at various speeds.  At an indicated 190 km/hr, the GPS reads a little under 180 km/hr.  This particular reading is theoretical, you understand!

Fuel consumption:  Bike instrumentation shows 8.9% more optimistic economy than the GPS distance divided by the actual fuel taken to top up the tank at the end of the ride.  True fuel consumption with a mix Street and Sport modes was 4.61 lt/100 km for the trip.  This looks about right for the 270-300 km that I expect from a full tank on an average journey without hammering but "making progress".

Just out of interest, compare this consumption with that of the GSX-S 1000.  On similar journeys, it used to drink 5.5 lt/100km.  On a trackday which Lee and I did in 2018, it was nearly double that consumption figure.  Lee's contention is that a combination of modern technology and Euro 5 emissions legislation is making modern engines more fuel efficient.  I don't think that there's much doubt about that and other factors such as power to weight ratio, gearing, drag coefficient all have a bearing on consumption.  Then there's external factors such as road conditions and your right wrist!

I'll repeat the experiment again on some longer future trip.

The other thing I recently tested was the headlight.  This is the first bike I've owned with an LED headlight.  Its angular or insectoidal-shape also made me wonder how good it was going to be in lighting up twisty roads out in the countryside with no ambient lighting.  We have nothing in NZ that's going to eat your face if you run into it, but collecting a sheep, cow or deer is going to sting a bit and spoil your day. 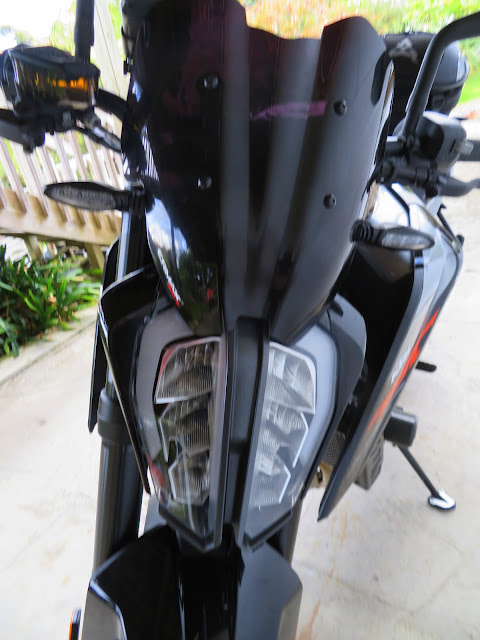 Based on a praying mantis or Alien from the movie? 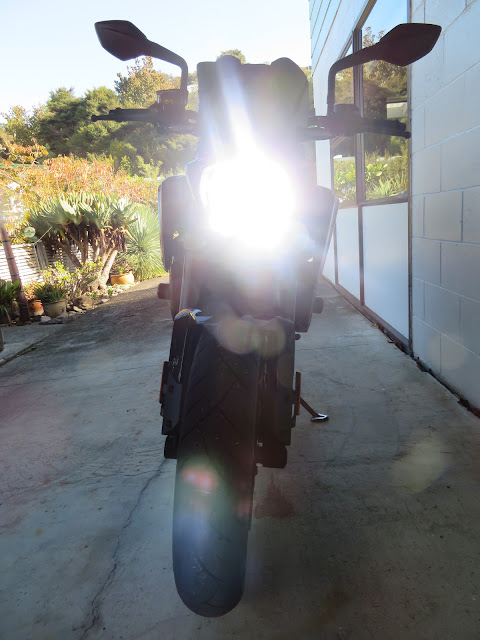 Heading from Coromandel village to Whitianga township after dark is a good test as there's virtually no artificial lighting between them and lots of tight corners and elevation changes.  I'm delighted to report that forward illumination was really good and side illumination (road verges) was also good.  The latter was far better than I was expecting, given the headlight shape.  The following photos don't really do the headlight justice in reality but they do show that the important bits show up just fine. 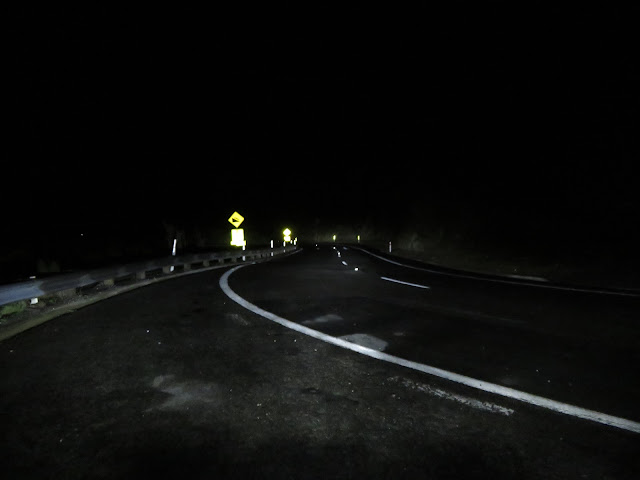 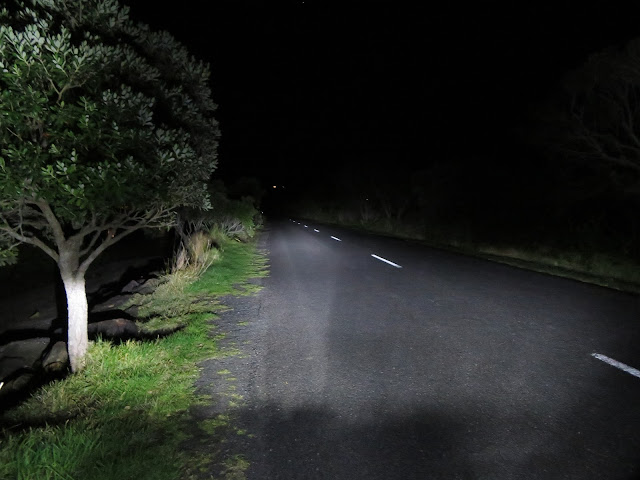 Long Bay Road - good side illumination as well as distance

Naturally, lighting can always be improved with spotlights and the like.  However, I've done 5 NZ equivalents of the Iron Butt 1600 km in under 24 hour endurance rides on previous bikes.  There's around 11 or 12 hours of riding in the dark on mostly twisty unlit roads.  My yardstick is would I be happy riding in one of those events on the KTM?  The answer is yes - no problem at all.

If your eyes have glazed over after reading that lot, I apologise.  You can have a rest now as for part of May and June, Jennie and I will hopefully be having an excellent adventure in China and Hong Kong! 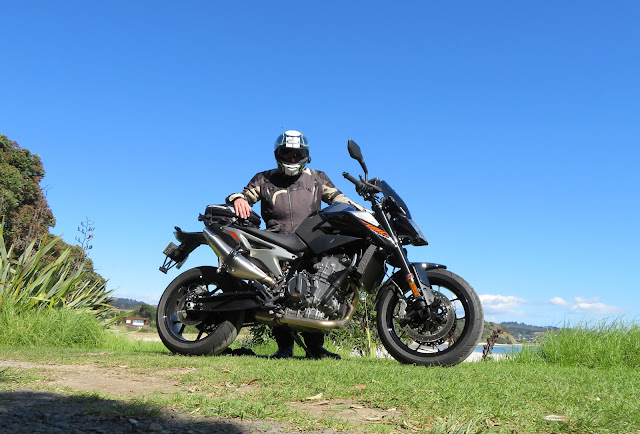 Fun in the sun