They say that if you love your work, you never have to work another day.  I'd say that's pretty true, even if it is voluntary in my case.  Over the winter, we've had quite a number of riders pass their advanced roadcraft tests and choose to continue on to become Observers (mentors) and pass on their skills to others.  The Central North Island and Auckland regions of the Institute of Advanced Motorists combine resources to periodically run 2 day theory courses with some practical work thrown in as a prelude to practical training modules run over a number of months.

It so happened that the current training course was held over a recent holiday weekend and the main roads from my home on the Coromandel Peninsula to the venue in Auckland were choked with idiot holidaymakers displaying a whole raft of poor driving habits including failing to stay in their lane on bends, ill-considered overtakes, following too closely - the whole 9 yards and really depressing.  I took to the back roads as soon as I was able and predictably, they were almost totally free of traffic! 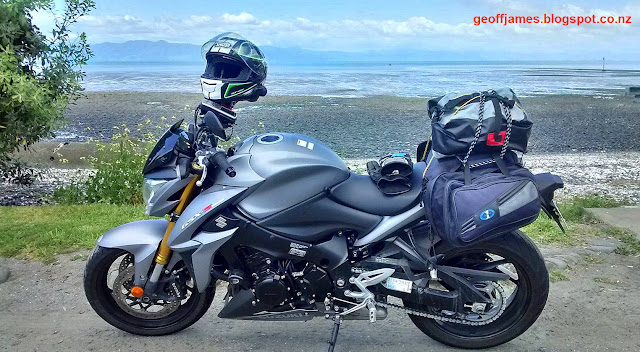 The well-loaded Gixxer at Kaiaua, Firth of Thames


The training was held for the first time at a great venue in south Auckland which had easy access to motorways, busy urban environments and wicked country roads.  The course is based on the world-renowned UK Police Roadcraft manual and training system.  It consists of a series of theory modules interspersed with practical ride training and that dear reader, is where the fun starts - more on that shortly! 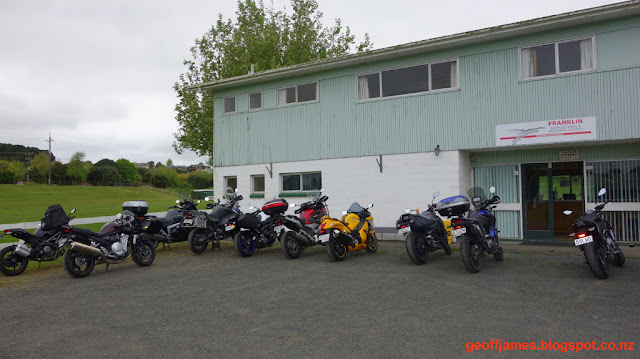 A great mix of sport tourers, sport and adventure bikes 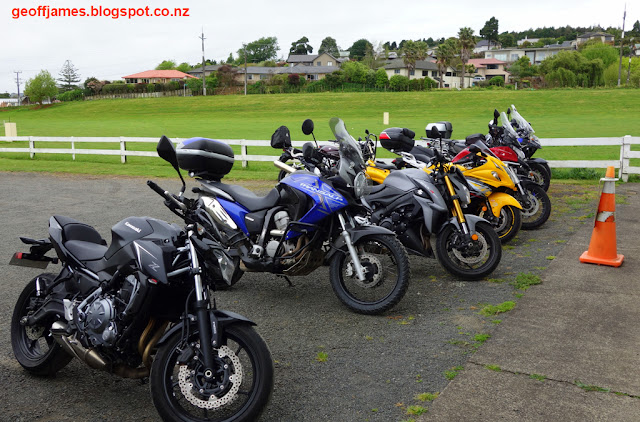 Some of the early arrivals

It's a pretty intensive course with a 1:1 ratio of Observer tutors and Trainee Observers but with the no-ego ethos of IAM, everyone gets on famously with lots of laughs along the way.  That's exactly how it should be for a great learning environment. Observers from Auckland and the Central North Island present various topics about becoming an Observer.  Many are about the technical aspects of advanced riding but it's always a surprise to the participants on just how much emphasis is placed on psychological and interpersonal skills.  We all know from our own working experience that the technical content is relatively straightforward.  However, if anything is going to derail smooth sailing, it's the people stuff almost every time!  It's understanding how to recognise and deal with human factors which is an essential skill for a successful Observer. 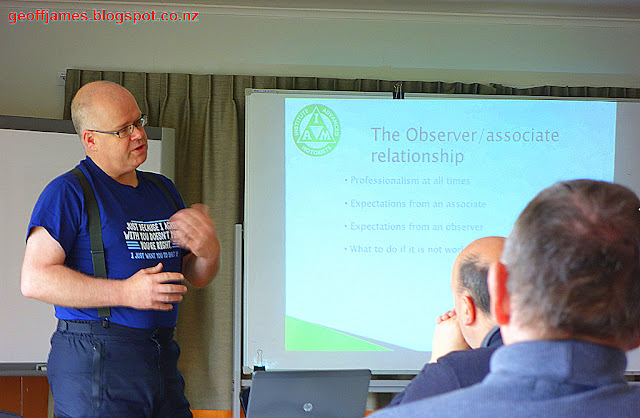 One of the Trainee Observers runs a commercial training organisation but also wants to give something back to the motorcycling community by volunteering with IAM.  He's an outstanding rider and coach in his own right and when living in the UK, taught Angelina Jolie and Matt Damon plus many other A-listers to ride for movies as well as working on the sets himself!  Have a look  HERE . He also has a well-developed wit and continually cracked everyone up with what might be termed a rather direct approach to interpersonal issues!  Bet he didn't talk like that to Angelina..... 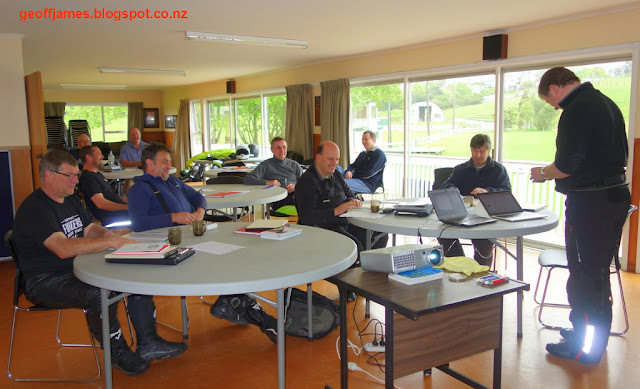 Laughter is the best medicine - everyone cracking up

There are two practical rides during the course and these are what the Observers really love!  Each Trainee Observer has to take out an Associate, role-played by an experienced Observer.  The trainee is expected to follow and guide the "Associate" over a route by helmet to helmet comms, whilst maintaining good, safe positioning to observe specific good and improvement aspects of the "Associate's" ride.  These have to be remembered for later discussion!  The Observers of course, go out of their way to make life a tad difficult by all manner of devious actions.  Pulling out of an intersection into traffic when it's only safe for one bike to do so is just one simple trick to throw the composure of the Trainee Observer if he or she is poorly positioned.  Other tricks in the "dark arts" arsenal won't be mentioned.  One thing worth mentioning though....... on the ride, we display a few poor riding practices for the Trainee Observer to hopefully identify.  When you've been riding to the Police Roadcraft standard for a while and have it locked in muscle memory, it's unbelievably hard to make deliberate errors - it feels sooooo wrong!  That's by no means implying that we don't make mistakes because we do.  However, it does go to show how well the system works in practice.

Needless to say, most Trainee Observers return from the ride in various states of confusion, steam coming out of their ears and using quite a few words that would make their mothers blush!  It's an excellent exercise in demonstrating just how busy an IAM Observer is on a ride.  After a few more theory sessions, most trainees find the second ride a lot easier although it's a further 8-12 months of practical training before they're ready to take their Observer theory and practical exams.

On the second day, Mark, the police sergeant in charge of road traffic policing in the south Auckland region dropped in to say hi and lend support, along with Tim; one of his motorcycle officers.  Mark and a number of other officers are IAM members and it's a valued relationship.  Working with the police on charity rides, using their training facilities on occasion are just part of that relationship. 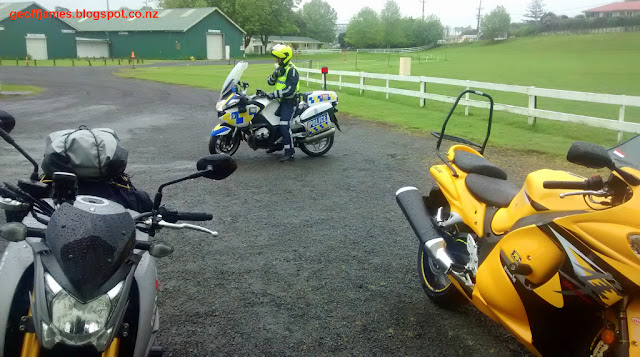 Officer Tim and his company BMW 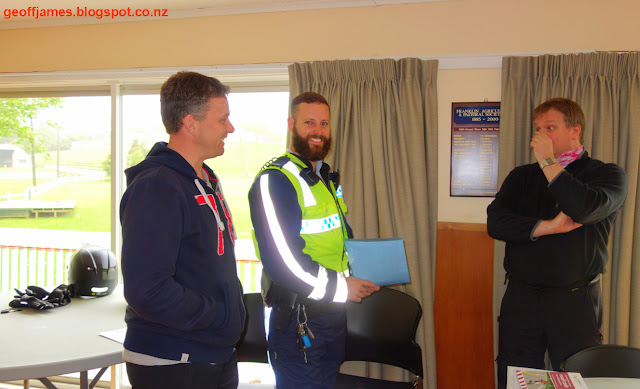 The course is intensive and tiring but everyone is really happy with the outcomes and future impact on riding standards in NZ.  No-one ever stops learning and it's a great opportunity for the Observers to refresh themselves, learn new presenting skills and pick up other new stuff.  A real win-win, so what's not to like?  On a personal note, I turned 70 a few days before the course and would have almost certainly stopped riding long ago had it not been for IAM.  And that can't be bad, can it?