This is why we do it

I'm just one of thousands, if not tens of thousands of both volunteer and paid motorcyclists world wide who spend time trying to lift the skill base of riders to reduce the risk of harm and raise their enjoyment of riding on two wheels.  I guess the reasons why we do it are all pretty similar in that it maintains our own personal standards whilst trying to help others.  And let's not mention that essential ingredient of having fun!

Watching all riders go from strength to strength over the months of coaching with IAM to pass their Advanced Police Roadcraft test gives a lot of quiet satisfaction and pride.  However, some give a bit more pleasure than others and I'd like to introduce Colin. 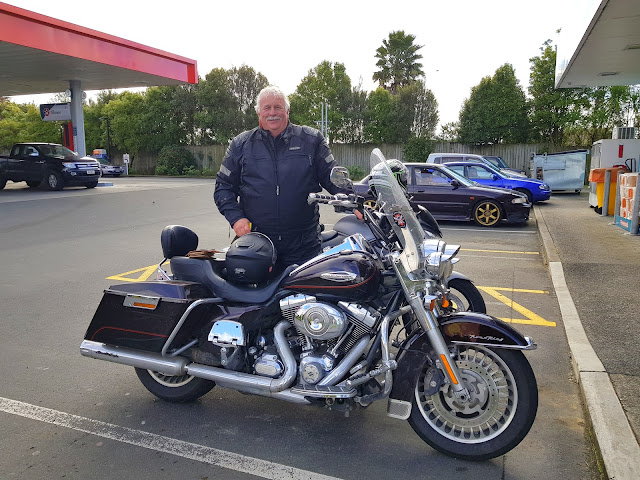 Colin and his Road King


Colin joined IAM in 2013 and before IAM had established a presence in his region, it was a 4 hour haul up to Auckland, spending a further 2 hours on a demanding mentored ride; then riding 4 hours home again.  His level of commitment to raising his skills was truly humbling.  Even more recently, it's still been over 2 hours each way to attend more "local" advanced coaching.  Furthermore, on both the longer hauls and shorter ones, Colin unfailingly showed up in all weathers.


Colin's business and family commitments disrupted his coaching for lengthy periods but he showed real determination  to get the job done.   On Wednesday, I took Colin for his formal Advanced Test, covering city, freeway, and country road environments and he absolutely aced it.  The enthusiastic response Colin got from the IAM coaching team and other members showed just how much his perseverance and fabulous attitude was recognised and makes it all so worthwhile.  As the title of the post says: "THIS IS WHY WE DO IT".

Oh, and don't let anyone say that a cruiser isn't the ideal machine to make rapid progress on twisty back roads, it's all about situational awareness, road position, throttle control and being in the right gear - just follow Colin and be impressed!

There was only one downside to the day.  About 25 km from home, I got a puncture!  A bit of a wobble whilst cornering alerted me to the fact and I pulled over to have a look.  Sure enough, the rear tyre was well down but I couldn't see the source of the leak.  It was in the middle of nowhere with no cell connectivity either.  Fortunately, I always carry an electric pump and a bit of trial pumping showed that it would hold air for a wee while.  That last 25 km took well over an hour with regular stops to add air but at least I got home!

An inspection the next morning revealed a small slit in the corner of one of the rain grooves of my Pilot Road 5 tyre which was only fitted 2000 km ago - bugger!  I was a bit concerned about unseen damage to the carcass through running at low pressures so this morning, took it by car to a dealer about 140 km away who had a direct replacement in stock if the need arose.  A quick inspection showed that the tyre was damaged internally.  Offsetting the pain to my wallet was the outstanding service at Drury Motorcycle Performance Centre.  From arrival to leaving was under 30 minutes and they even made me a cup of coffee in that time - how good is that? 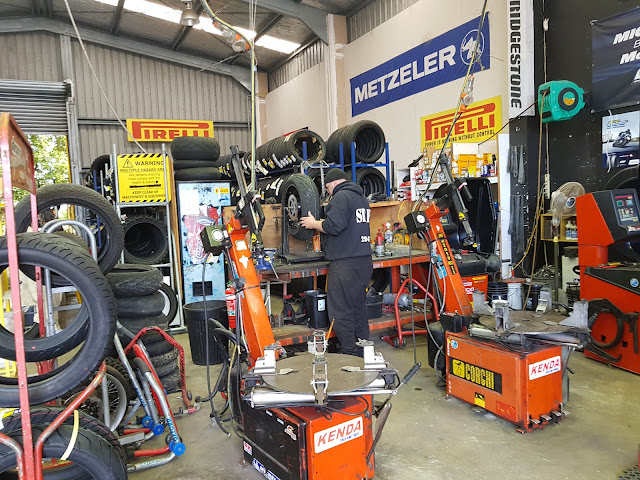 The new tyre getting fitted 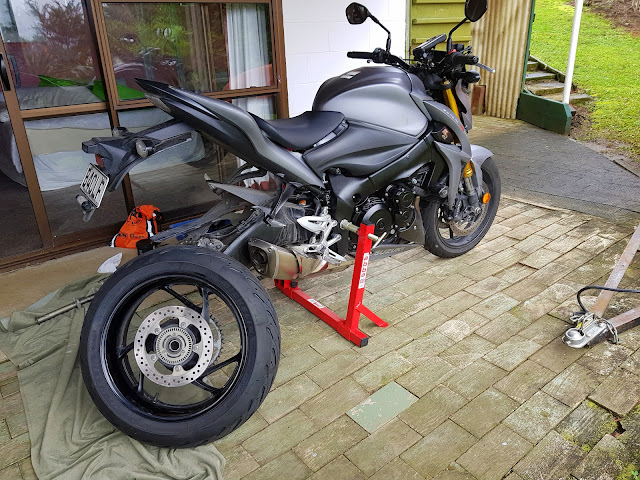 Back home and ready to assemble 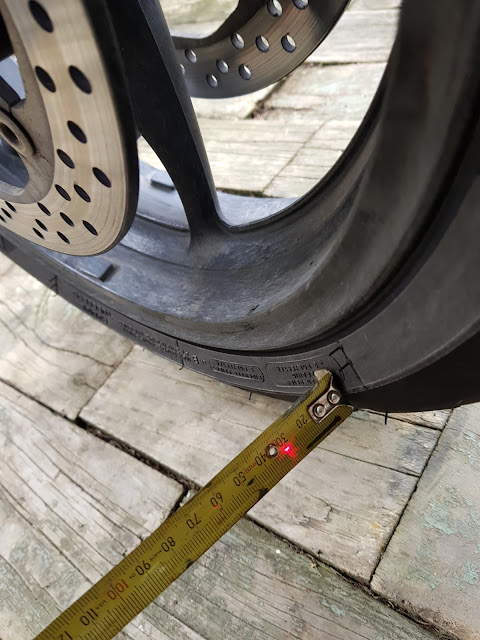 Aligning both wheels with a laser rig 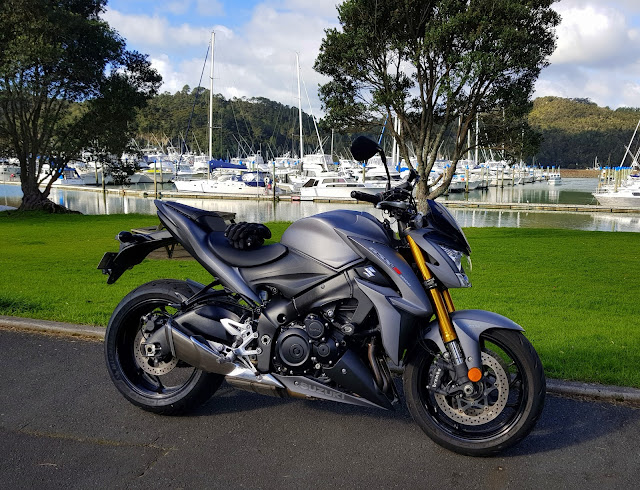 Back out on the road again, scrubbing in the new rear hoop

Road safety concerns all of us and with increasing traffic volumes and drivers being distracted by any number of in-car devices, drugs, alcohol and downright poor attitudes and skills, it affects us all.

There is a very sobering website covering every road death in Australia since 1989.  The way that the graphics are presented make the statistics especially poignant.  It's HERE .   My best friend and close workmate was killed in a road accident in the late 1980's and only a few minutes after being told, Jennie and I, accompanied by a police officer; had to break the news to his wife and children.  That's not something you ever want to do more than once in a lifetime and it still haunts me in darker moments.

It was this tragedy which had such a big impact on my life in so many ways and every one of the deaths represented on the Australian website and the rest of the world have people who are profoundly affected for the rest of their lives.  The main hope is that at least some good also comes out of it for those left behind.  In my case, it caused me to focus on what was really important in life.  Indirectly, I suppose it caused my later involvement with the IAM rider and driver improvement programme, both from a personal benefit basis and being able to pay it forward later by helping others to become better riders.

On an altogether different note, for my 70th birthday late last year, our wonderful daughter gave me a voucher so that we could go together on an Asian cooking course in Auckland.  We finally found time to redeem the voucher and just over a week ago, attended the course.  I chose Malaysian food as I'd never cooked it before.

The tutors were huge fun, easy to follow and everything was prepared from scratch.  Here are some photos of the occasion. 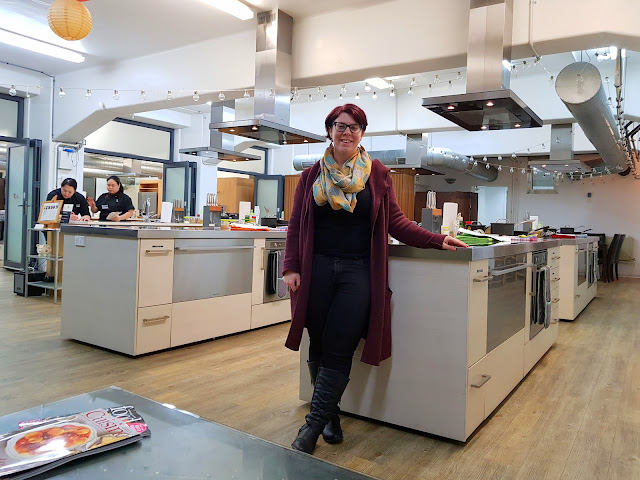 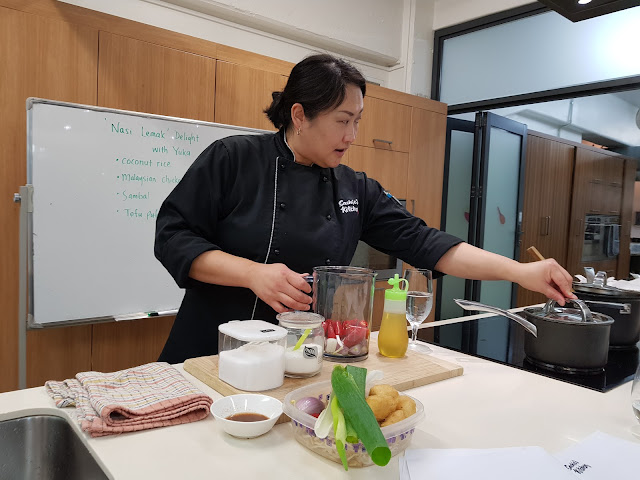 Demonstrating before we start - oh those spice aromas! 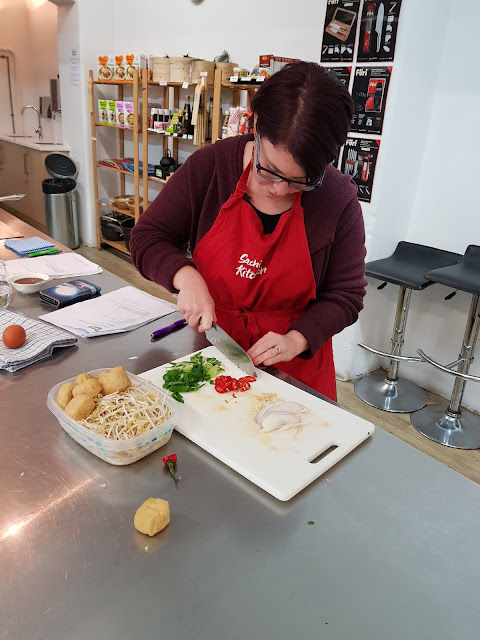 Teamwork - Victoria wielding a sharp knife whilst I wash rice 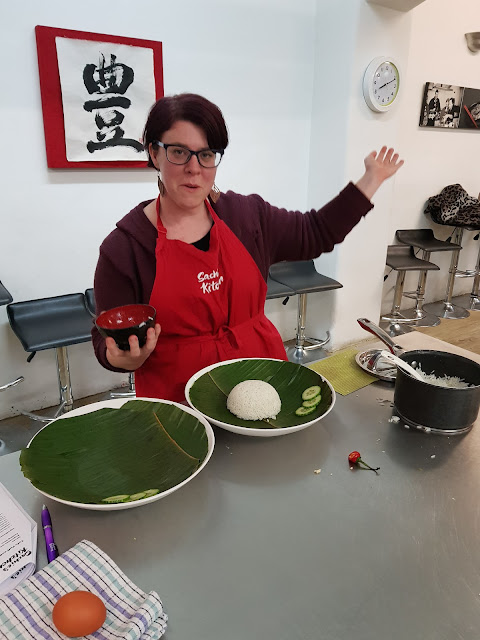 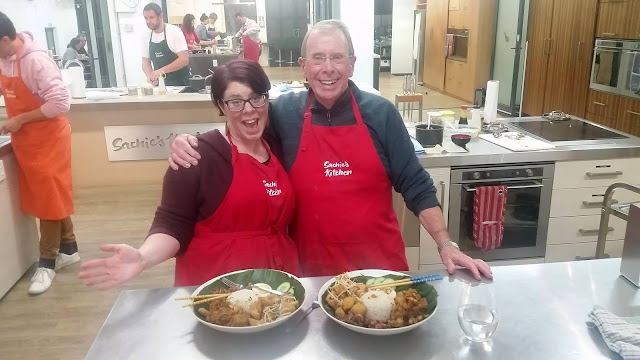 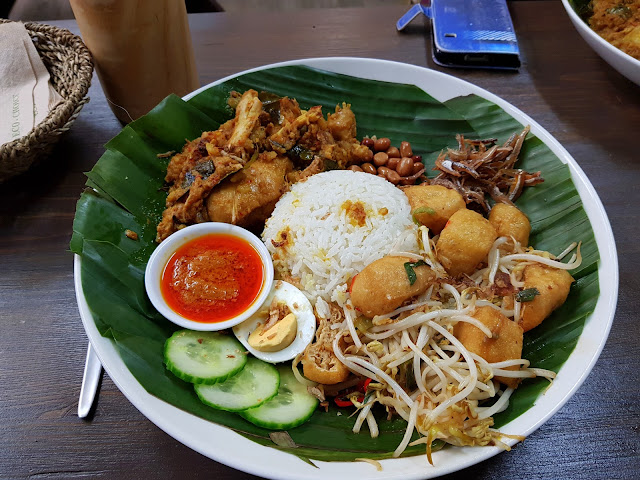 Pretty good, even if I do say so myself!  Tasted divine

We had a fantastic time together but I'm now under pressure to cook it for Jennie.  Managed to stall for a wee while as we can't get some of the fresh Asian herbs where we live but our daughter has sided with her mother and will be mailing some down from Auckland!