As previously mentioned, life in NZ has been close to normal since mid-2020 with the exception of on-going basic C-19 precautions and the odd community case which has been effectively dealt with.  From a motorcycling perspective, it's been business as usual with hot summer days and minimal rainfall - wonderful (apart from our garden suffering with the drought)!

Last Sunday was a scheduled get-together for the central north island region of the Institute of Advanced Motorists.  The format varies depending on who turns up.  Potential new members can have a 1:1 assessment, we can take existing members for a coaching session or simply go for a social ride.  It also happened to be the IAM national AGM in the south island and a number of our regional members were heading for that, so uncertain what we were going to do.

The meeting point was in the city of Hamilton, 160 km from where I live so it was up before sunrise to get ready for the 2 hour trip south. Staggering out of bed, this was the view from our deck to get the juices flowing in anticipation of a great day on two wheels. 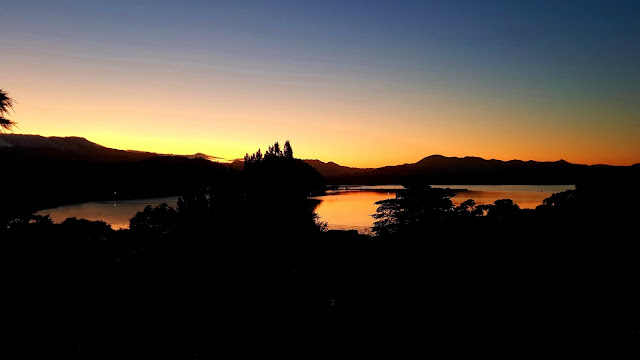 A bit of a mental debate about which jacket to wear .  The forecast was for 29 C later in the day which is a bit warm for my full leather suit.  Dawn temperature was 16 C, so the choice was to wear a mesh jacket with the liner removed - shouldn't be too cold even with wind chill.  Hmmm...... big mistake and wish that I'd packed a light wind-proof jacket as the temperature dropped to 11 degrees at one point as I rode inland to the south.  It certainly affected my concentration for a while but it soon warmed up as the sun rose.  Silly mistake not to be repeated!

A pleasant breakfast at a Hamilton cafe as others trickled in from around the central north island, including 3 potential new members from the Bay of Plenty.  One was a member of the Patriots NZ Defence Force motorcycle club on his Harley Davidson, plus partners on an MT-09 and a GSX-F 1000F.  Lovely to see ummm... "mature" riders on sporty hardware :-) ! Due to most of the mentoring team being down south at the AGM, the decision was made to make it a purely social ride through twisty Waikato province back roads out to the Nikau Caves cafe for lunch. 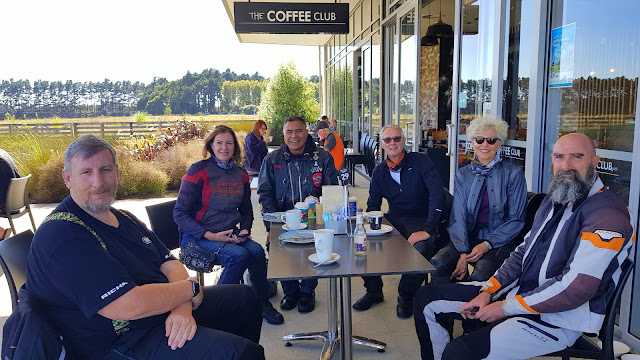 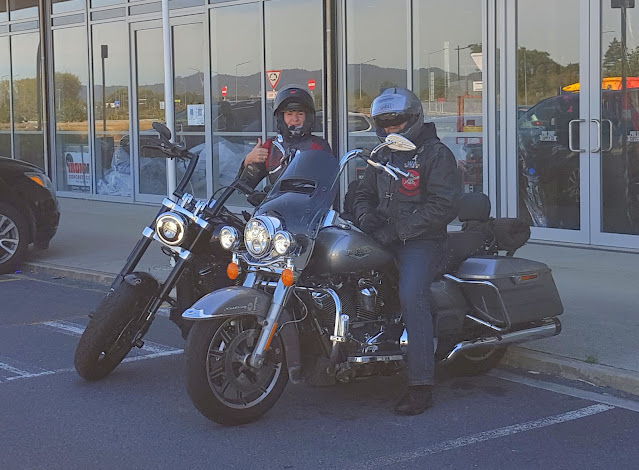 Libby and Ra ready to roll 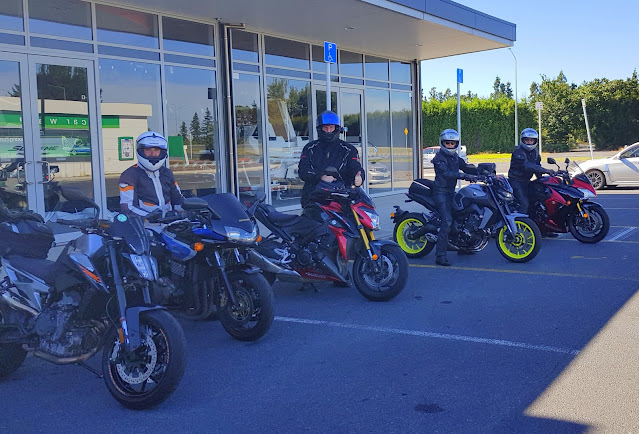 Scott, Chris, Barbara and David waiting for the photographer to pull finger and get on his bike

Chris, who was leading the ride had planned a really scenic but challenging route through back roads with minimal time on significant public highways - sheer magic!  I volunteered to be Tail End Charlie to keep an eye on things from the rear and connected to Chris by helmet to helmet comms. 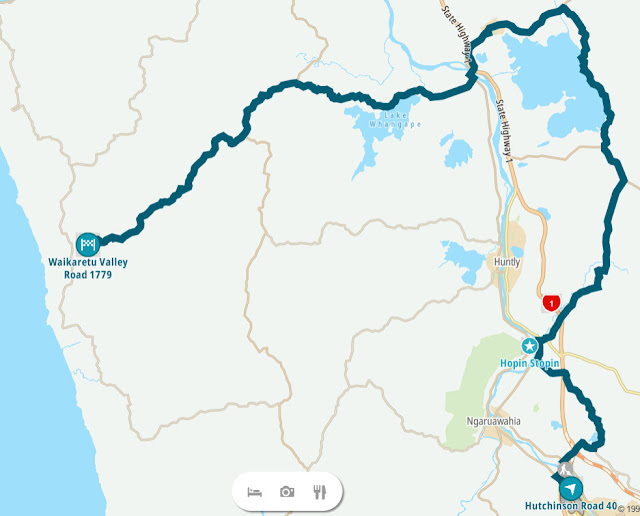 Around 100 km of almost continuous bends!

The route was an absolute cracker and a smooth approach to attack the bends to make good progress rather than on and off the throttle and brakes - we would have been stuffed in no time!  The new riders in the group fitted in seamlessly and really enjoyed both the scenery and the riding.  The Harleys performed really well in the slower tight stuff despite their conservative geometry, using their low down torque and engine braking to good effect.  Of course, attitude and skill far outweigh what sort of bike you ride. The Duke 790 was in its element - it ain't called The Scalpel for nothing! 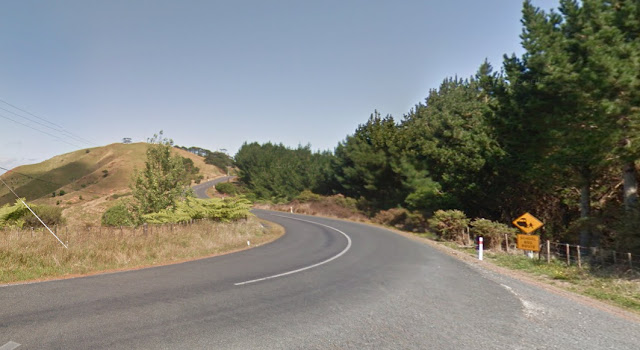 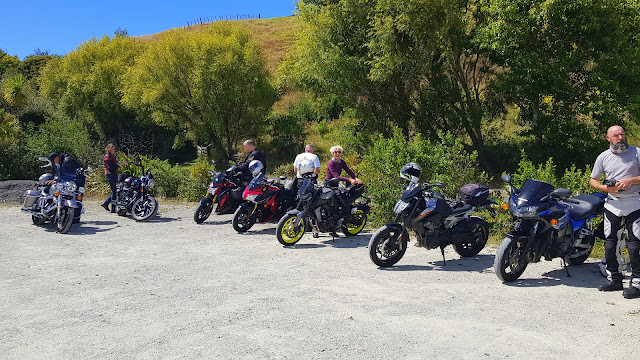 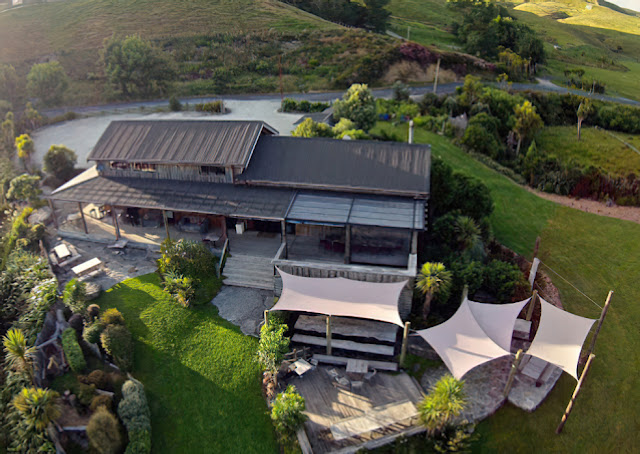 Drone shot of the cafe (source: Google)
With plenty of space both indoor and outside, the Caves cafe has long been a popular destination for motoring and motorcycling groups.  This time, the Mercedes car club were there.  Good food, great company - what's not to like? 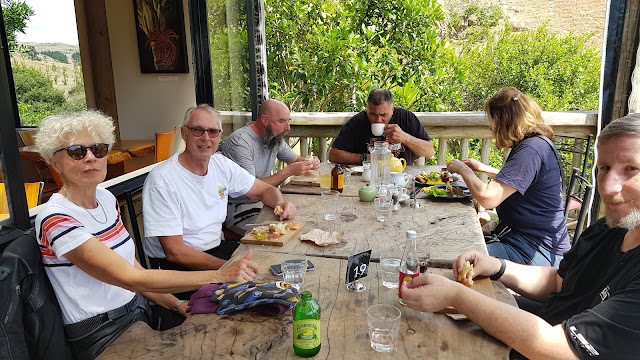 Lots of rehydrating and adding calories after a hot ride
Our region covers the best part of 50,000 sq km and the IAM members live at all 4 points of the compass within it.  The decision was made after lunch to return to the village of Te Kauwhata to fuel up and then go our separate ways home.  I still had a fair bit of fuel so would say my goodbyes when the rest stopped for gas and I'd stop closer to home.
Within 5 minutes of setting off from the cafe, my ride took a turn for the worse when I was stung twice on the back of the neck by a wasp.  It really hurt and a few choice expletives were sent over the comms airwaves.  Hard to keep up the concentration when it feels like someone has stuck a knife in your neck and 2 hours to get home for some antihistamine! Must add some to my medikit.  I always wear a tube scarf irrespective of weather since being stung years ago but this little sucker must have crawled into a gap between my scarf and the back of the helmet.
Being distracted by the pain, I forgot to gas up for the last leg of the journey where there's no fuel available.  Noticing a rapidly dropping gauge,  I started short shifting, wondering whether my mobile phone would work in the numerous black spots on that stretch of road if it was necessary to get Jennie to bring a can of gas.  All was well in the end, getting home with a splash of fuel still visible in the bottom of the tank.  Handy information for the future, knowing that the fuel gauge is fairly reliable and that I can squeeze nearly 300 km from a full tank if I can control my right wrist. All in all, a wonderful day out with just over 450 km covered on some superb roads.
Just to add a nice finale to the day, I got a call from a mate saying that at the AGM down south the previous day, I'd been awarded lifetime membership of IAM "for services rendered" in establishing the Central North Island chapter 4 years ago.  Incredibly moved and honoured to receive it although at the moment, it doesn't sit all that easily.  It feels wrong to be honoured for something which has had such an impact on the way I ride and which has lengthened my riding career by a good margin.  Paying it forward to help others is the least response, given the massive personal benefits. 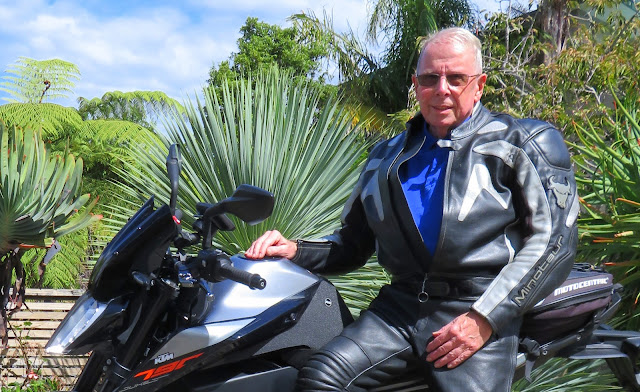 Beauty and the beast
Posted by Geoff James at 12:41 12 comments: