A social ride and some purchases

Our central north island region of IAM covers some 36,000 sq km so it's difficult to get a bunch of riders together to socialise as opposed to formal 1:1 coaching.  We try and organise a purely social ride every couple of months or so but with winter here now and with parts of our region getting some decent frosts and/or fog first thing, meeting at a central location can present a few challenges.  It's an early start for some, riding a couple of hours or more to a rendezvous, spending 3 or 4 hours on the ride and then going home afterwards.  Extreme care on the roads are required and good warm gear too.  My Gerbing heated gloves were perfect for an early morning start.

However, a few hardy souls turned up last weekend to ride through the Waikato back roads.  It would seem that a few car clubs had the same idea as we shared the start point at the small town of Te Aroha with the MX-5 (Miata) and Ford Mustang owners clubs. At the finish point, it was an encounter with the Jaguar owner's club.  Excellent that everyone mingled and chatted. 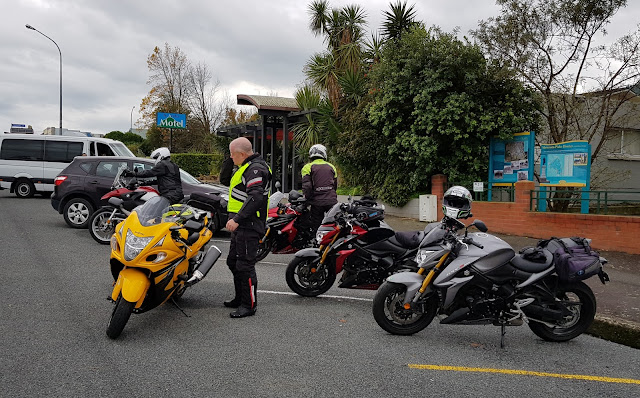 Some of the group arriving at Te Aroha

The Waikato province has some fabulous, technical backroads and the leader of this ride who goes by the nickname of "Goose" had chosen some beauties.  We use the "corner marker" system where the second rider stops at a turnoff to ensure everyone takes the correct route.  It enables riders to progress at a good pace without anyone missing the turns.  I volunteered to be the Tail End Charlie sweeper on this ride to keep an eye on things from the very rear.  That position also means it's a real pleasure from the back to see a bunch of identically-trained riders all cranked over taking the same lines through corner after corner - sheer poetry!

The ride took us past the entrance to the Hobbiton set from the Lord of the Rings movie.  A bit of care was needed here as narrow, twisty country roads and bus loads of tourists aren't a good mix with riders "pressing on".  However, no dramas!  Everyone who has been there says it's a terrific experience, not at all tacky.  It's located on a working farm. 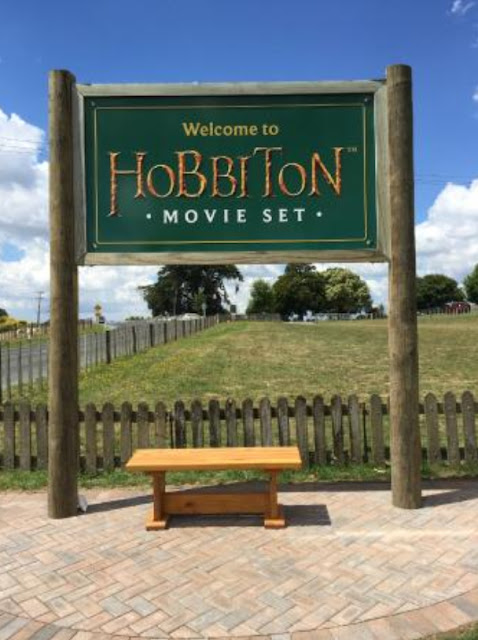 Not a Hobbit in sight (file photo from Trip Advisor)

The back roads were exceedingly well chosen by Goose as with the exception of just a handful of km near Hobbiton, we encountered almost no traffic.  Just east of the town of Cambridge, we rode up a narrow sealed track to the summit of Sanatorium Hill; so called because tuberculosis patients were once sent there to recover.  All that remains now is a beautiful park with spectacular views across the Waikato province.  The view was made even nicer with the remains of morning fog below us in patches and frontal cloud starting to roll in. 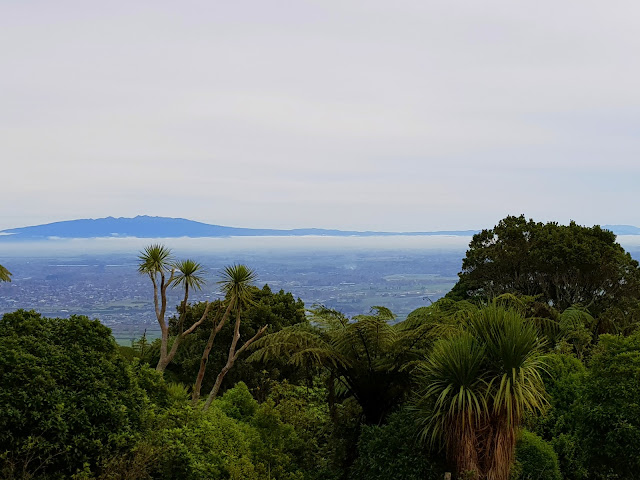 Mount Pirongia in the distance from Sanatorium Hill 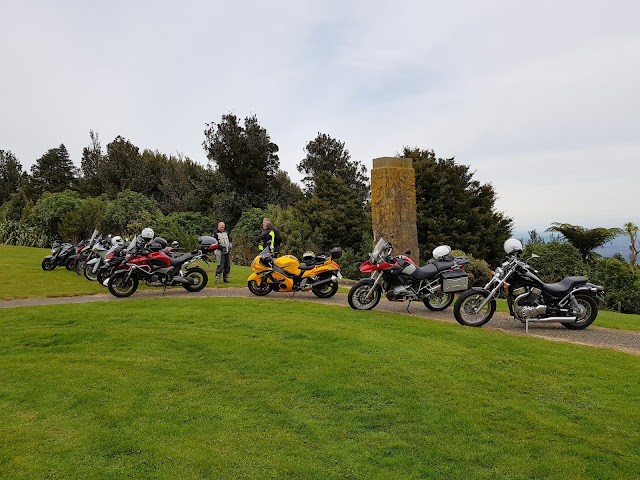 The bikes at Sanatorium Hill 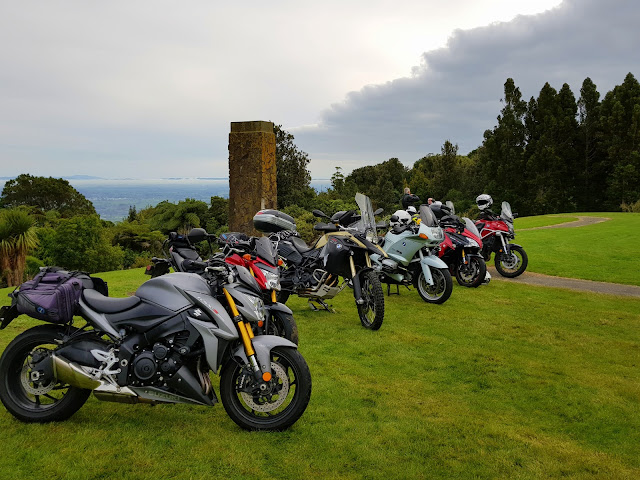 From the photo op stop, it was on to our lunch destination, Oasis Hideaway just outside Cambridge.  It's a rustic function venue which is open to the public on Sundays with their speciality being wood-fired pizzas - perfect! 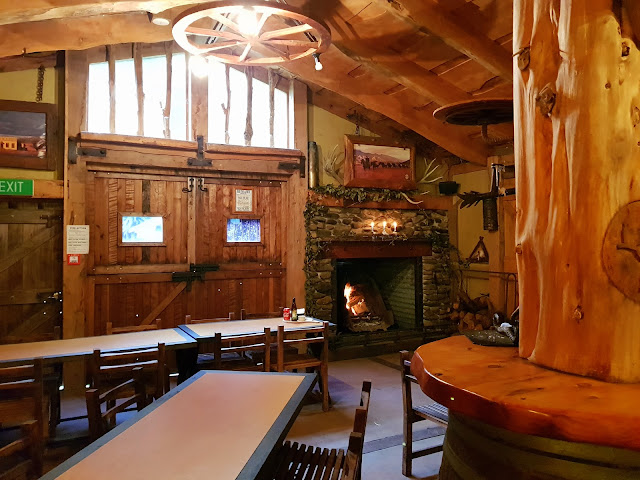 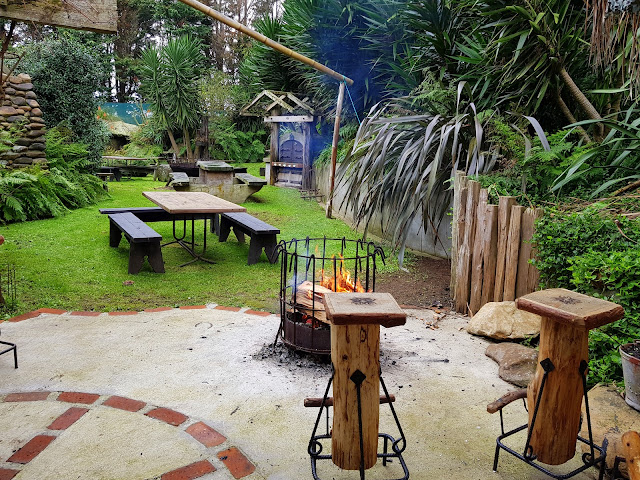 Some of the outdoor seating with a large brazier 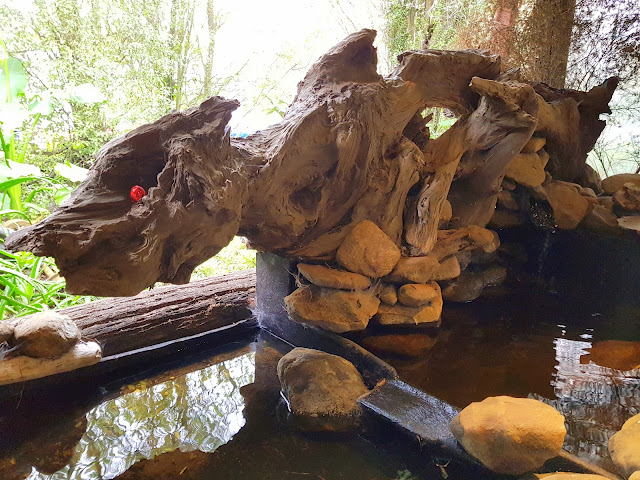 Petrified wooden dragon - could it be Smaug?

After filling up with pizza, it was time to head for our respective corners of the central north island.  It's so nice riding with friends whom you trust implicitly and I arrived home towards sunset happy and having covered a little over 400 km.  The first social ride of winter!

It was also time to renew the brake pads on the Suzuki.  The OEM pads have lasted for 40,000 km with a lot of life still left in them.  However, they've always been "adequate" at best and it is well past time to upgrade them.  On the Blackbird and Street Triple, the OEM items were replaced with EBC HH sintered pads and the improved braking was remarkable.  Why the manufacturers don't fit pads as good as these as standard is beyond me.  They are kind to brake rotor life too. 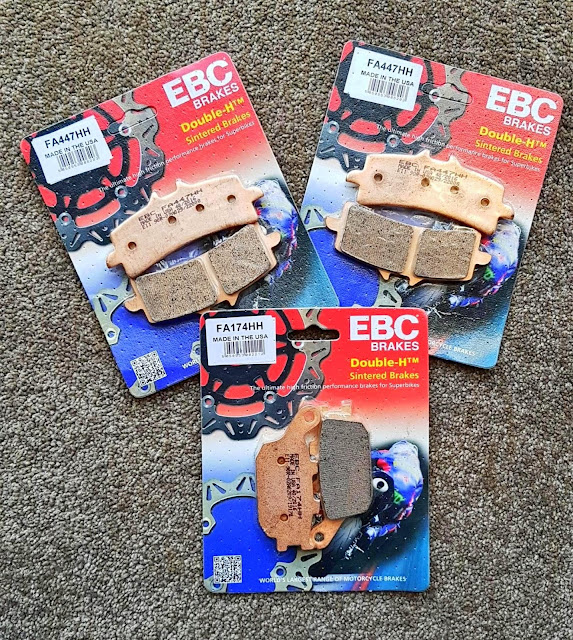 Not a big job to fit them to the Suzuki, although it took a chunk of the morning to replace them all, much of which was taken up with giving the calipers a thorough clean.  Jennie thinks the rear pads look like toy tortoises, bless her.  I can see what she means in the picture below! 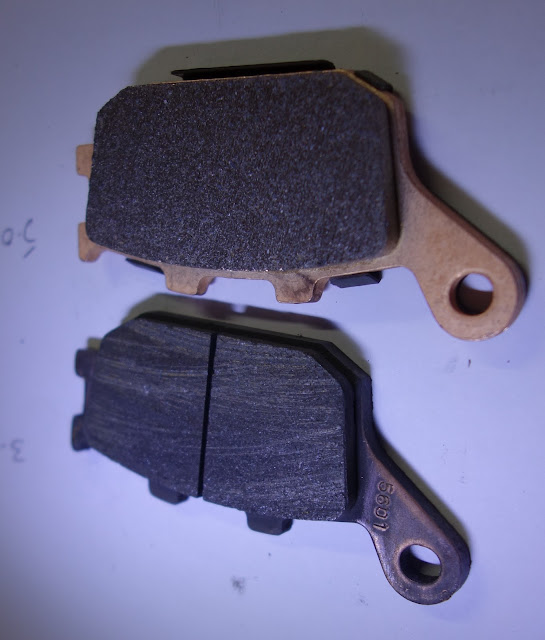 A curious thing though!  EBC pads are manufactured in the USA so I looked on eBay USA to buy them on line.  However, the pads for the GSX-S 1000 are different depending on whether it's the ABS or non-ABS model.  I needed the ABS version.  It was hard to tell which was which from the eBay adverts and as a lot of the GSX's imported into the USA are non-ABS (why????), I wasn't prepared to get into a hassle if I ordered the wrong ones so bought them locally for a bit more than I'd have paid ex-USA.  The weather is crap outside today so bedding in will have to wait until later this week.

The other purchase which arrived today from Revzilla is a new motorcycling undershirt.  I've been a long term fan of Icebreaker merino layers for all activities as they are warm in winter, wick sweat off in the summer and you still have friends at the end of a ride as they don't smell!  A lot of my layers are getting old and tatty so perusing Revzilla, I saw what might be just the thing.  It's a skin layer made of Outlast fabric which apparently regulates temperature in both summer and winter.  Allegedly, it was developed by NASA for the space programme where B.O might lead to extreme violence on a long stay in space!  I'm normally the world's biggest cynic with claims like that but it's made by Rukka.  Given their excellent reputation, it's worth a try at US$70.  Looking forward to see how it performs. 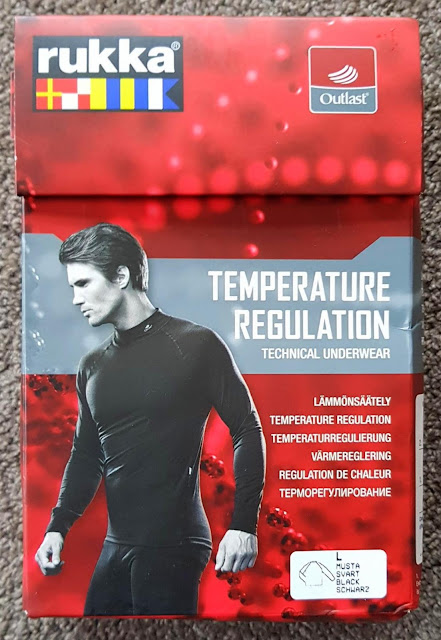