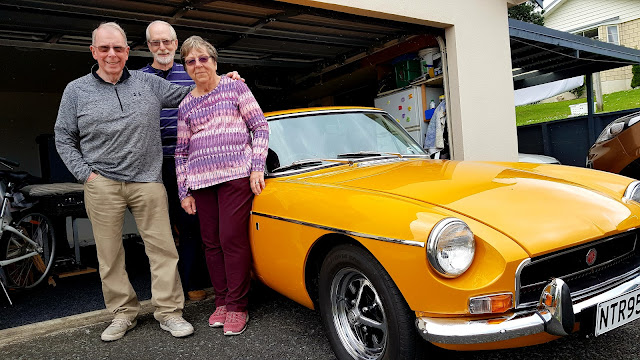 Jennie and I collecting the car, with owner/restorer Brian in the background

Back in July, I made a post HERE about the trials and tribulations of finding a classic car for my wife and I to enjoy fun outings together.  Finding something which we both liked was bad enough but that was nothing compared with the problems we were to face in sealing the deal on the 1972 MGB GT which we fell in love with.  Here we are, over 3 months from the handshake with the vendor and have only just taken ownership.  The appalling performance by a government department and its agencies which caused the delay defies belief and I'm not going to go into the detail but here's a short summary based on what documentation I've seen and feedback from Brian, the vendor.

When the used MG was first imported into NZ in the 80's from the UK, officials recorded the car i/d numbers and issued new registration plates.  The vendor fully restored the car to its current beautiful condition in the intervening period and all was well.  That is, until he took it for its mandatory fitness warrant before the sale to us.  An eagle-eyed inspector spotted that the paperwork and the actual alpha numeric i/d on the car didn't match.  The assumption by all parties was that the official who completed the original documentation decades ago had accidentally transposed two digits.  In NZ, annual (originally 6 monthly) fitness checks are required by law and the error had never been previously picked up by the official inspectors. This meant that the sale couldn't proceed without completing some official documentation to address the error.

Brian, the vendor; duly did this and sent it away for processing.  Complete silence for over a month - no acknowledgement at all. This was contrary to their stated processing time. Then there was email contact of the barest kind, then another email a few weeks later asking him to send the documentation again. The original was lost.  Then another email was received deregistering the MG until it went through a new certification process.  No personal call to soften the blow or explain it, just an impersonal email.  The system seemed designed to prevent actual verbal discussions between the parties to seek clarity which caused further delays until Brian was actually able to talk to a human being and start to make progress.  I'm leaving out details of even more delays which severely tested Brian's sanity and patience.  Brian and I put in a joint formal complaint about the delays and process and after yet another delay, we received a written apology although it was hardly fulsome.  The whole business was concluded shortly afterwards.

It's only my interpretation but the documented process isn't user-friendly for the average member of the public (a massive understatement).  Compounding this are the roadblocks to direct communications with knowledgable people to achieve clarity about what is required.  First point of contact is with clerical-level staff who have little technical knowledge and the outcome is predictable!  It was only when Brian was able to talk to someone with technical automotive experience that real progress was made.

W Edwards Deming was a US citizen who was widely recognised as the catalyst for getting Japanese industry on its feet after WW2 and becoming manufacturing world leaders.  He coined the saying "If you have great people and poor systems, the poor systems will win every time".  Ain't that the truth?  Having been involved with productivity improvement for virtually my entire working life, it's particularly galling.  Not unexpected though when you have an organisation which now has lawyers at the top of the tree.  Shakespeare had probably got it right with his line from Henry VI: "The first thing we do, let's kill all the lawyers".  No doubt I'll now be subject to vexatious legal procedings!   In fairness, contrast this episode with the wonderful collabaration I had with the same organisation when working on a road safety initiative for motorcyclists (HERE).  I presume that the key difference was due to working with a regional, technically competent and highly motivated team; not head office beauracracy and they were most definitely focussed on effective outcomes for all parties.

The 50 km journey home up the twisty coast road was quite a short, sharp learning curve.  A 4 speed manual gearbox with 2 speed overdrive took a bit of getting used to, especially rapid changes when I messed up the late selection for a corner and found myself desperately stirring the box to find a gear - ANY gear would do.... please!  Fortunately, the long stroke engine delivers much more torque than expected so poor gear selection wasn't as critical as with lower torque, higher revving engines.  The other surprise was the extra steering effort required required in tight bends with no power steering.  Seeing old footage from the 50's where drivers of single seat race cars wrestled manfully with the steering wheel, you'd be forgiven for thinking that I was chanelling them on the homeward trip!  The Spax adjustable rear shocks noticeably help cornering though.  It was a warm trip home and I found a design error when I went to open the quarterlights for a bit of air circulation. They only open about 3cm before contacting the properly adjusted mirrors!  Never mind, there are a few other options to get fresh air.

What with coming to grips with the controls of a new vehicle and its general "feel", there wasn't a lot of spare brain capacity for mental math to convert the MPH speedo to NZ's raft of metric speed limits.  No sooner than I'd done the mental math for one limit, another one loomed into view and I wasn't sure that I'd correctly remembered the previous ones!  Very conscious of the long arm of the law as far as speed limits go.  I think what I'll do for the time being to ease mental workload until they're properly embedded in muscle memory is to stick thin slivers of red adhesive tape on the chrome outer ring of the speedo at the appropriate points as a simple visual aid. 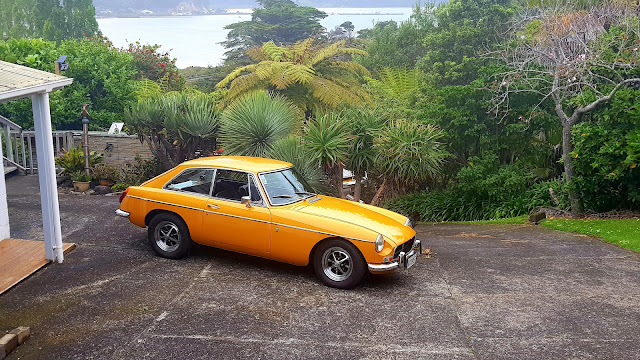 Safely parked up at home after the delivery trip 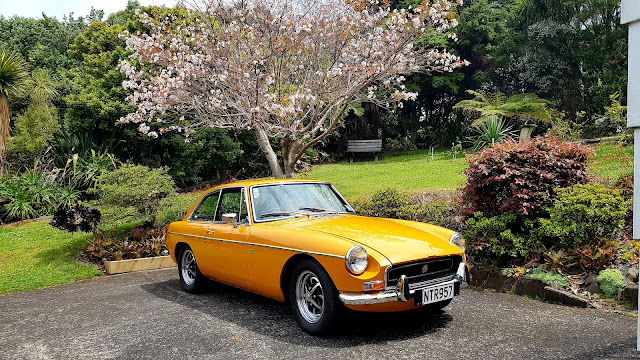 Reversed out of the garage with care!
It's so much fun to drive, very much like a motorcycle in that it rewards precise driver input and fully involves you, unlike most modern cars which are much easier to drive and not so involving.  There's only one thing I'm unimpressed with and that's the brakes.  No servo assist on the front disc/rear drum setup and it certainly doesn't have the stopping ability of even the most basic modern car.  It's tolerable if you really stand on the pedal but it might benefit from better pads.  I changed all the OEM pads on my last 4 motorcycles to EBC HH and I understand that something similar is available for the MG.
The standard of finish is flawless and is a tribute to Brian's restoration skills.  The use of twin pack paint has really paid off. 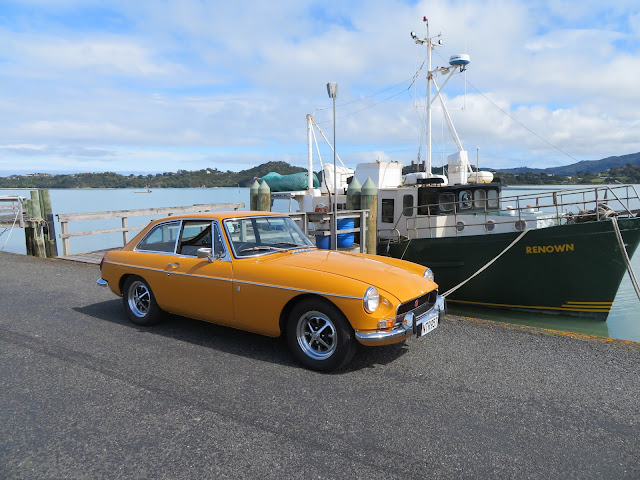 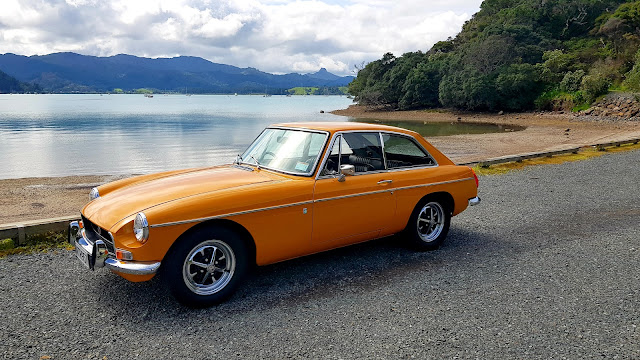 Taken on our street
The interior is similarly immaculate.  There's nothing to be done other than fitting a USB charging port into one of the blanked-off apertures.  I won't be fitting a proper music player and will play music on the phone through a portable bluetooth speaker I have kicking about. 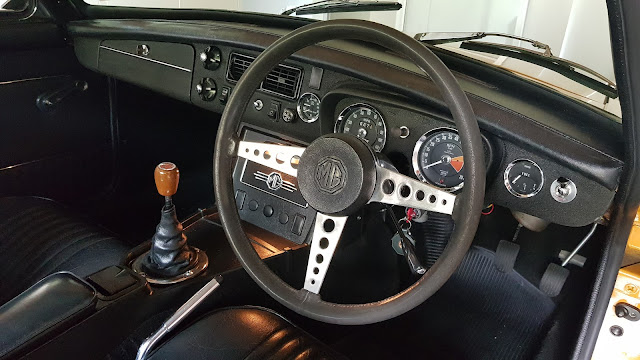 Very tidy interior
Brian is a man after my own heart when it comes to being fussy (Jennie would say anal) and the finish in the engine bay matches the exterior.  I'll try and keep it that way.  I need to get hold of some original decals that go on the heater box assembly but I won't tell Jennie or there'll be much eye-rolling and sighing!  The original points have been replaced by Brian with electronic ignition for the sake of reliability but I want to keep the car as close to original as possible.
Made a dick of myself the morning after the delivery trip.  Went to reverse it out of the garage and couldn't turn the key in the ignition barrel.  Panic rising, a quick squirt with CRC and no difference.  A call to Brian but he didn't answer his phone so sent a text and then back into the car to see if the CRC had worked its magic.  No go, but sudden realisation that among the plethora of keys Brian had given me, I'd picked up the wrong one, duhhhh.  Much merriment from Brian a few minutes later.
The engine needs a bit of choke starting from cold until it warms up.  Unfortunately, the choke lever won't lock in the outward position so I'll have to investigate that.  In the meantime, I've slotted a short piece of rubber tube which fits over the choke cable when pulled out and raises the tickover without me holding it out by hand.  That will do for the time being. 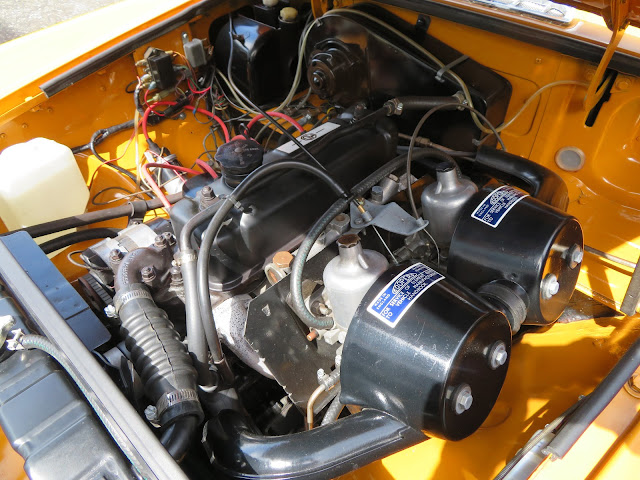 An extremely clean engine bay
Buying a 49 year old car and celebrating our 49th wedding anniversary was a serendipitous occurence.  Jennie and I decided to have a bit of fun and merge a couple of photos in black and white.  The one below on the left was taken 3 days before our wedding in 1972, with Jennie sitting on the wing of our Morris 1100.  The one on the right is current, sitting on the wing of a 49 year old MGB! 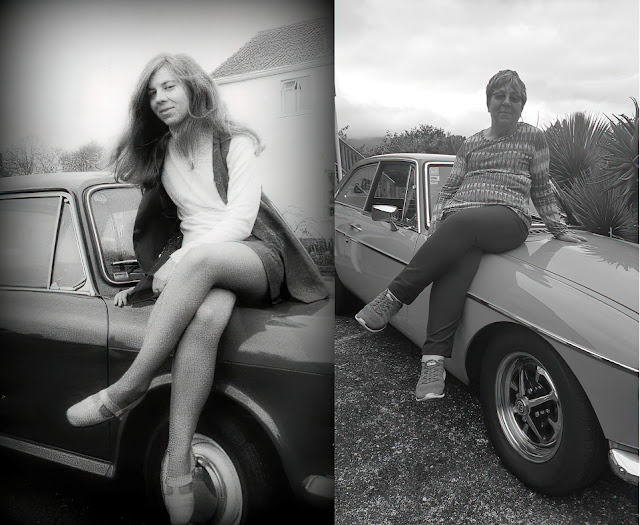 1972 and 2021!
Motorcycling hasn't been forgotten though and I was out recently coaching a farmer and his wife from near Rotorua who are keen to learn Advanced Police Roadcraft skills.  However, retirement from mentoring and examining with the Institute of Advanced Motorists at year end will give more time for outings with Jennie in the MG.  Fun times ahead!