Not your normal day on the road!

The general perception of government departments (sometimes with justification! ) is of inflexible and slow to act bureaucracies, which are totally out of touch with the general public.  Well, I've just had that notion stood totally on its head, at least in the instance I'm about to describe.

I guess that motorcyclists worldwide have a much higher accident rate per capita than cars, trucks etc and the cost of medical care from trauma is pretty high.  I'm sure that a lot of public servants would like to see us gone from the roads.  Accepting personal responsibility for our riding standards and raising skills is one clear path to reducing the risk of serious harm but leaving that aside for now, it is fantastic to find a government department who are working in a positive manner to improve the lot of riders - who'd have thought it???

The Coromandel Peninsula which I live on has a low static population, it's pretty remote and has challenging, twisty roads that run by the sea and over the Coromandel mountain range.  In other words, it's a bikers paradise and the so-called Coromandel Loop has an international reputation. Because it attracts lots of bikers, a percentage of them have a distinct lack of skill and very quickly run out of talent on this unforgiving road.  Consequently, it has a high accident rate.

Enter the NZ Transport Agency (NZTA).  Its broad purpose is to deliver transport solutions within NZ on behalf of the government - a pretty wide mandate. Rather than introduce punitive measures against motorcyclists, they looked at initiatives which would positively benefit the 2-wheeled community in conjunction with some other specialist government agencies.  Over the last couple of years, they chose the southern part of the Loop to implement a range of measures which would be of  particular benefit to bikers.

Some of these measures included:
Sealing property entrances to stop gravel ingress onto the road
Better design of roadside storm drains
Improved safety barriers for motorcycles
Better signage and reflective chevrons for bends etc (advisory speeds are marked on signage in NZ)
Modification of roadside cliffs, banks and foliage for better sightlines
Improved road surface and clean-up after repairs
More roadside emergency helicopter landing pads in remote areas. "The medical Golden Hour"
Perceptual countermeasures (Different road markings and other visible cues on deceptive corners, designed to reduce the rider’s speed, improve their lane position and give greater separation from traffic travelling in the opposite direction.)

The graphic below is part of an explanatory pamphlet showing the Southern Loop.  The letter P shows where perceptual countermeasures have been employed and H is where helicopter pads have been installed.  The other initiatives have been implemented as appropriate throughout the Loop.  The full pamphlet can be accessed by clicking here HERE :

The million dollar question is have they worked?  From personal experience, the maintenance-oriented improvements and signage certainly have.  It's too early for any statistically valid data from the perceptual countermeasures but it's certainly prompted some discussions among riders on bike forums.  Overseas research (check the internet) suggests that it's particularly useful for riders (and drivers) with less experience of riding in those conditions. Riders with higher levels of training tend to use a range of other cues to enhance their situational awareness.

Just before Christmas, I was invited to a preliminary meeting with NZTA and associated agencies to discuss extending the initiatives to the northern section of the Loop.  The invitation was extended because of both my IAM training and being a local from Coromandel Town. Several other riders from the wider region were invited for their input too.  The first thing which struck us was that the various agency representatives were very professional and it was clear that our input was valued.  A number of the agency reps are also keen riders which was an excellent sign!

Last week, I received an invitation to accompany the various agency reps to drive round the northern part of the Loop.  This is it: 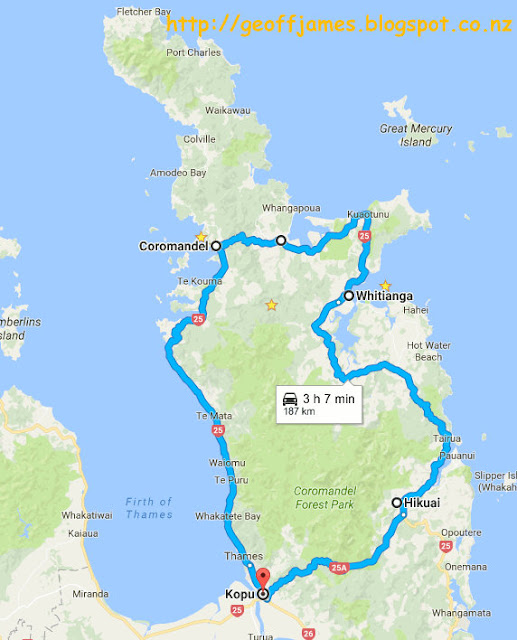 
Met them at Kopu at the southern end of the Loop for a clockwise inspection of the route.  They had detailed motorcycle accident statistics over a number of years marked on the maps, together with the severity and details of the accident.  Each location was investigated for sightlines, road conditions and many other variables.  In addition, certain spots were investigated to see if perceptual countermeasures would be of potential value.  Possible locations for rescue helicopter landing pads were also identified.  My role as a regular rider on the Coromandel Loop was to give feedback on road conditions, sightlines, tar bleed and so on which constitute a potential hazard to riders.  One example is a particular tight bend with a cliff on one side and the sea on the other.  The base of the cliff is within half a metre of the road and particularly after wind or rain, pea gravel comes off the cliff and settles in the nearside lane.  Limited forward view makes it an even bigger potential hazard.  All dutifully recorded by NZTA for appropriate remedial action! 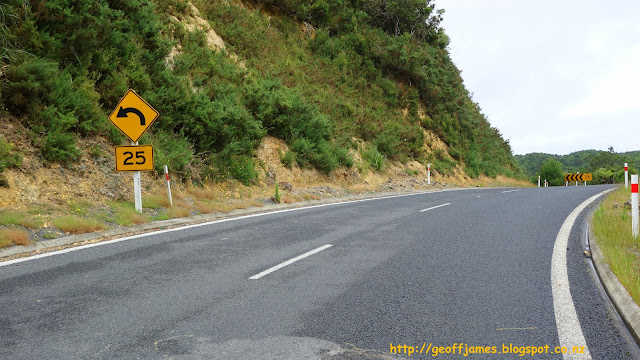 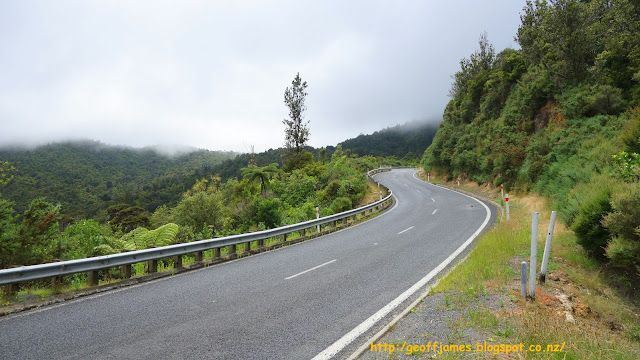 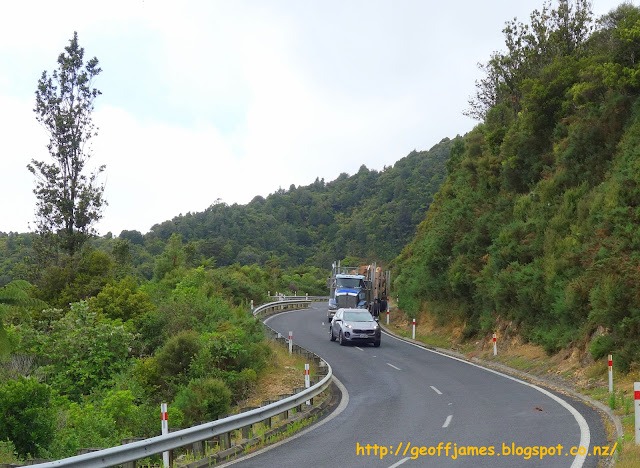 In the photo above, the SUV driver has relied on the logging truck driver signalling that an overtake was ok because of his view from a higher vantage point.  The SUV driver would not have been able to have a clear view from the lower vantage point because of the small trees to the left of the photo. In some locations, clearing some of the vegetation to improve sightlines is carried out to mitigate risk.

In the photo immediately below, this is the approximate view the SUV driver would have had as he crossed back onto his side of the road.  Any approaching vehicle would be masked by the vegetation and during the overtaking manoeuvre, there would have been even less visibility.  Buggered if I would have put my safety (and that of my family) in the hands of the logging truck driver in this particular set of circumstances even if he was trying to do the right thing - would you? 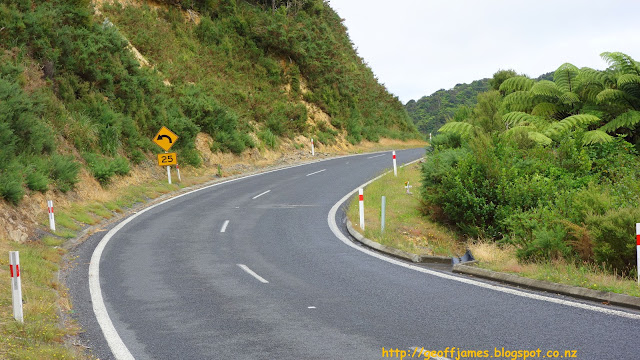 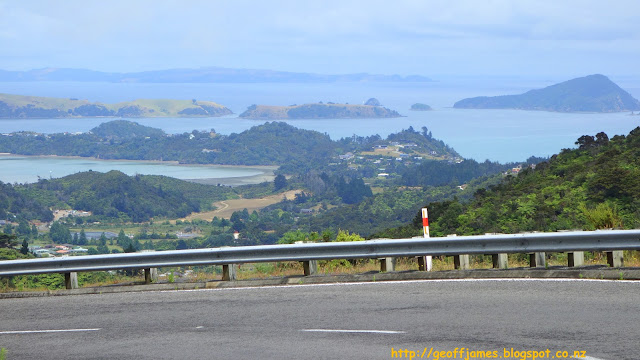 Unforgiving corner with steep drop.  Our house is on the hill in the background!

The last 30 km of the northern part of the Loop is across a stretch of road shared with the southern part where remedial work has already been implemented and we stopped to look at a few spots.  The two photos below show just one example of perceptual countermeasures on one corner. 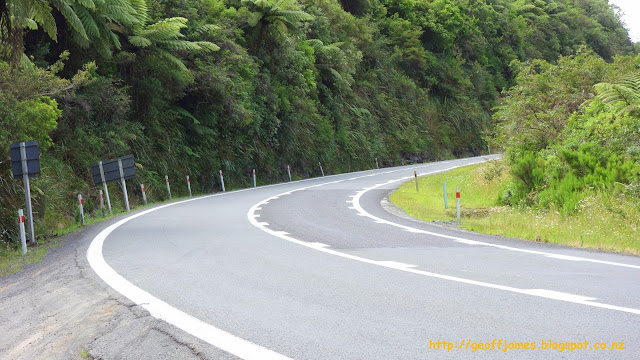 The broad intent is catch the rider's attention and to slightly channel them away from traffic heading in the opposite direction.  Also note that the plastic vertical edge marker posts are closely spaced as a guide to corner severity, particularly as they are reflective at night. 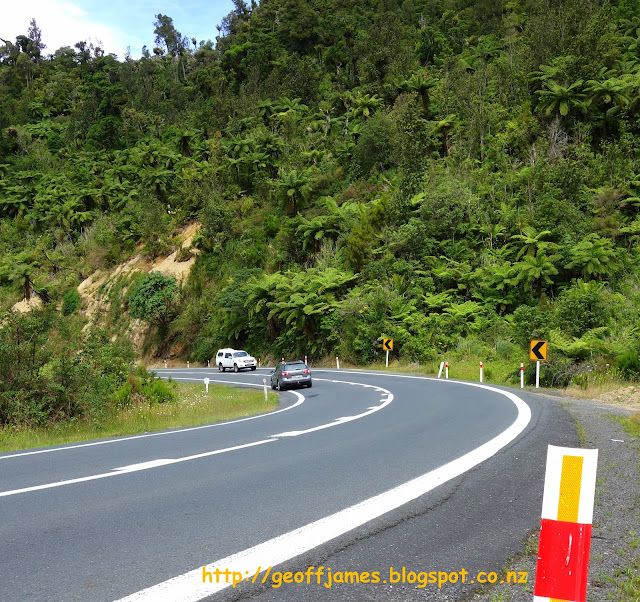 View in the opposite direction

I've deliberately avoided going into technical details on this post but wanted to give NZTA and their associated agencies accolades for being so proactive on behalf of motorcyclists in this instance. Pragmatic people, good listeners, easy to talk to and consummately professional.   As I've been typing this, an email from NZTA has arrived with all the action items for checking - how good is that??  Really impressed and pleased to have contributed in some small way.

Before finishing, it's worth mentioning that one of the other government agencies represented on this project, the Accident Compensation Corporation (ACC); has contracted qualified providers to run heavily subsidised one day refresher courses for motorcyclists under the Ride Forever banner.  There are 3 levels designed to cater for different levels of experience plus a specialist course for urban scooters.  More info HERE .  The most expensive course is $50 for a whole day so no-one can claim that the cost is prohibitive!  Plaudits are due for the holistic approach to improving motorcycle safety as opposed to trying to legislate us off the road!  These initiatives aren't the complete answer to improving motorcycle safety but it's a great step in the right direction.  Taking personal responsibility for one's own riding standards is still the big ticket item!