Nearly a year ago, I made a post about an NZ training initiative to reduce motorcycle injuries called Ride Forever which has been pretty successful to date.  That post is HERE .  Since then, a further incentive has been introduced whereby attending two of these courses allows the rider to claim $200 against the cost of registering their motorcycle.  Given that an 8 hour Gold-level course is only $50 and sometimes free, what's not to like?  That's what you call proactive!

The courses use the principles of the UK Police Roadcraft system, although to a less intensive level than the Institute of Advanced Motorists (IAM).  Yesterday, a Gold level course was being held on the Coromandel Peninsula where I live and because there's no such thing as too much training, I enrolled a few weeks ago.  It also helped that the course supervisor was one of my friends from IAM and it was nice to go along and support him.

I was talking about the course with one of my neighbours who rides.  He's an experienced motorcyclist but had never attended any formal training.  He had little idea of what his riding was really like so decided to enrol too.  He also pressured some local mates of his who were in the same boat to come along too!

So yesterday, the local contingent met early at the village fire station ready for the 50 km trek to Thames where the course was due to start from. 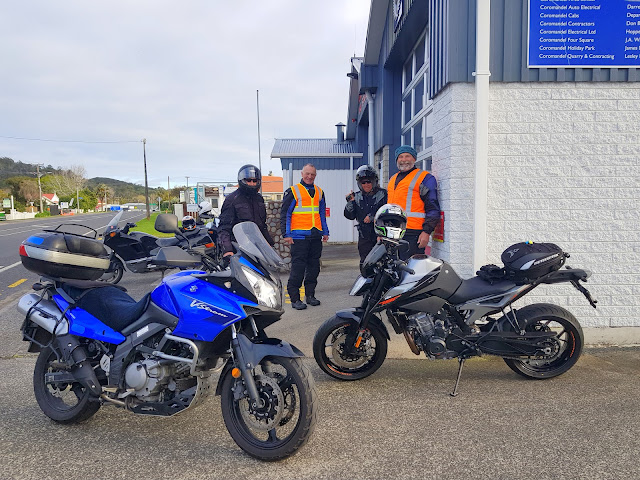 Meeting instructor Rob at a cafe in Thames, the first hour was spent doing introductions, discussing the days' programme and fitting comms to everyone's helmets before setting off.  The day was to be spent on a mixture of town work, open highways and tight technical country roads. 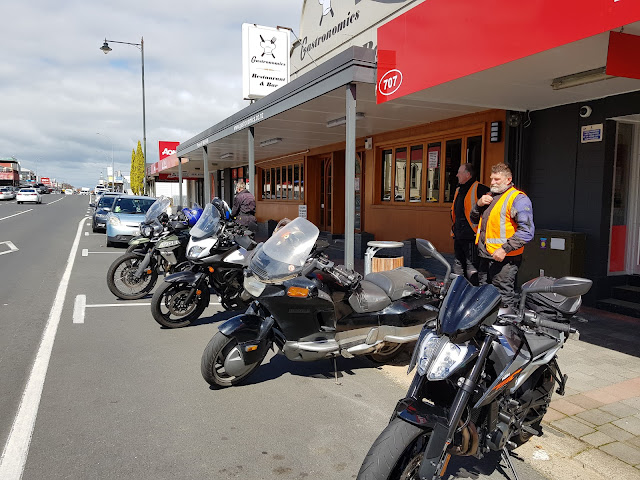 Getting ready to depart Thames

Everyone took turns up front with Rob just behind doing some coaching over the comms link, occasionally going up front do demonstrate a particular point.  Every so often, the group would pull off the road for discussions.

To be fair, I didn't expect to learn much from this part of the course because of my higher qualifications but it was both instructive and pleasing to see the rate of improvement by the guys who had not previously attended any training.  Using just one example, taking the correct line into corners, using a combination of throttle control and gear selection instead of brakes took a bit of getting used to but by the end of the day, it was starting to become instinctive.  After initial and understandable reserve, you could tell how much fun everyone was having by the banter over the comms.  A lot of this was down to Rob's training style.  Ego-free (as opposed to the drill instructor approach), quietly spoken, endlessly patient and always encouraging.

Whilst I didn't learn a lot on on the earlier part of the ride, it was still hugely enjoyable as a refresher and simply riding in nice weather with not much traffic.  However, the later part of the day was where I got a lot out of it.  Having only bought the KTM in March and what with travelling overseas and local crap winter weather, I hadn't got round to fully exploring its performance envelope.  Slow speed riding was one of these characteristics.  The KTM is the first bike I've owned in about 20 years that hasn't had a limited turning lock so my low speed U turns on narrow roads were a bit rusty.  The KTM is also a little snatchy at low speeds so some practice with onlookers was a good incentive to get it right.  No pressure then!  All went very well and I pushed the KTM harder than I would have done on my own - brilliant!

The second thing I hadn't tried on the KTM was emergency stopping from the open road speed limit (100 km/hour).  This is something I enjoyed trying on my previous bikes.  We found a deserted side road with a nice straight to practice on.  On the first run,  I gave it about 70% of full braking and there were no dramas whatsoever.  It just squatted down beautifully with nothing getting out of shape.  The next run was close to a full bore stop and again, no dramas at all.  After that, the gains were incremental and I'll keep the practice up because one day, it might make the difference between escaping injury or serious harm.

Following that, it was back to Coromandel Town for a final debrief and the handing out of certificates and badges. 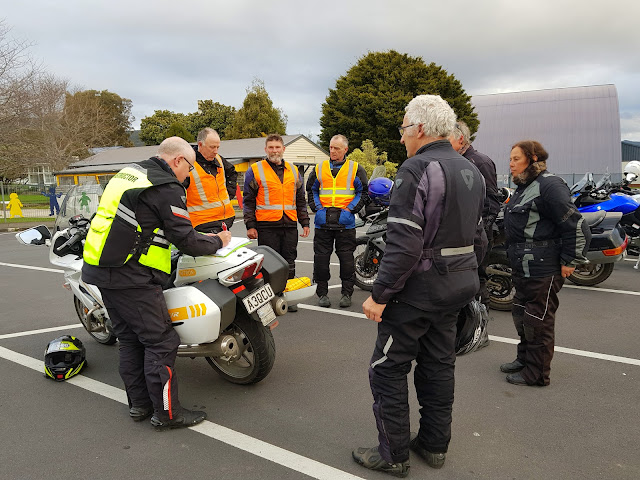 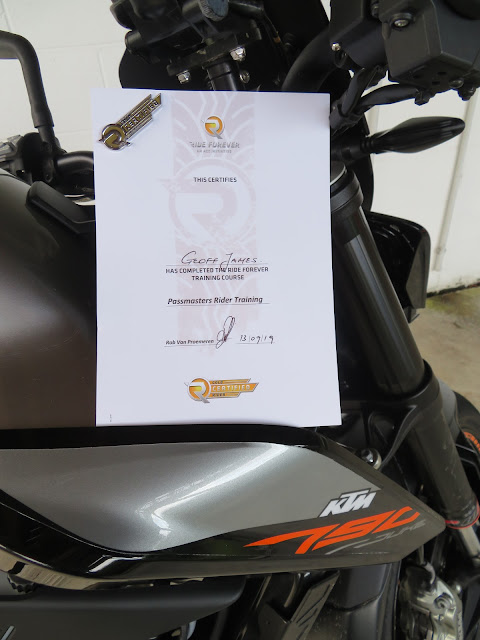 Any day on a bike is a good day but it's especially good when you're in excellent, fun company who have fantastic attitudes towards improving rider safety.  Oh and there's that matter about a decent discount off my next bike registration costs.....  what's not to like?

Addendum:  Following comments below from my Aussie mates expressing disappointment that a similar scheme isn't available over there, there MIGHT be light on the horizon.  I'm given to understand that the NZ Govt dept responsible for the R4E programme are in discussions with Vic Roads regarding the introduction of a similar programme in that state.  Fingers crossed guys! 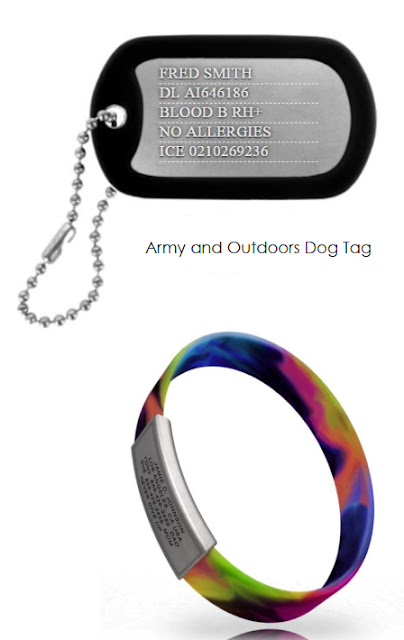 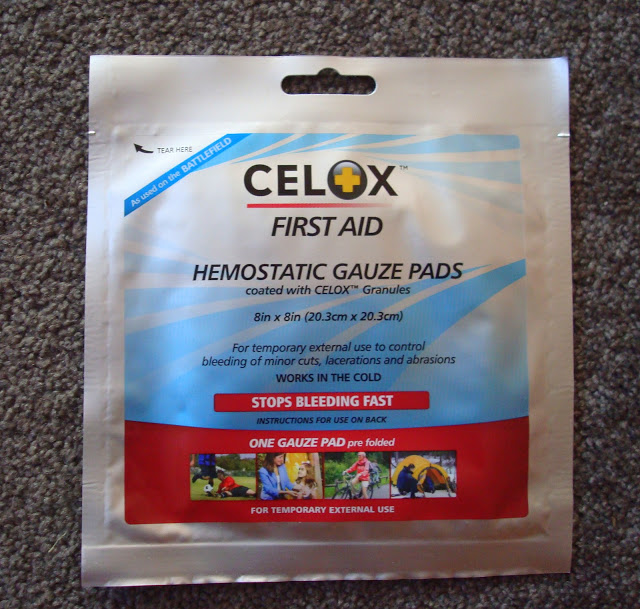