The Bee's Knees, a visitor and how we choose our bikes


The Bee's Knees
Blame it on a combination of discus throwing as a school athlete and competitive sailing later on in life but my 68 year old knees aren't in the best of shape.  I had reconstructive surgery on one knee in 1980 but thanks to the benefits of cycling, I've managed to keep away from the butcher's (sorry, surgeon's) knife since then.

However, riding a sports bike with high pegs does cause aching knees after a day in the saddle. Waving my legs in the breeze to get relief during a longer haul is a regular occurrence. Not wishing to join that well-known geriatric biker gang "Sons of Arthritis, Ipuprofen Chapter" because of  an aversion to regular medication, it was time to look at other options. 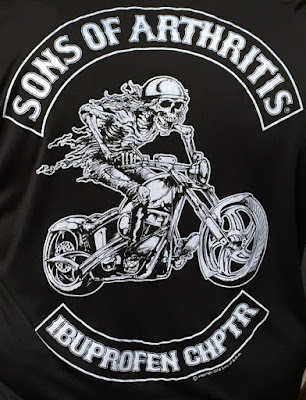 Striking fear into the public

Some years ago, I fitted a footpeg-lowering kit to my Honda Blackbird and although it was only a 25mm drop, the difference in comfort levels was huge.  A quick search of the internet revealed several options for the GSX-S. Some looked cheap and nasty and others over-engineered and pricey. The nicest-looking alternative was from a Buell, but required a bit of grinding, plus bushing of the pivot holes. I then found a member of a Hayabusa forum who sold a complete kit, using Buell pegs but professionally machined to suit the 'busa.  Trouble was, the forum post was 2008 so was he still around?  Sent an email, got a reply in less than 2 hours and yes, he was still making them and they fitted the GSX-S - yippee!!!

The postman arrived with a package from the US and it was instantly torn open.  What a treat to see some engineering of the highest quality - all properly bushed and polished.  In fact, they are better finished than the originals.  Kudos to Joe Satterwhite for setting such high personal standards. 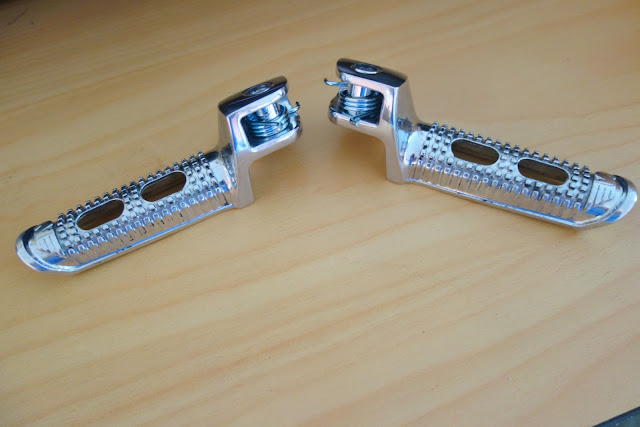 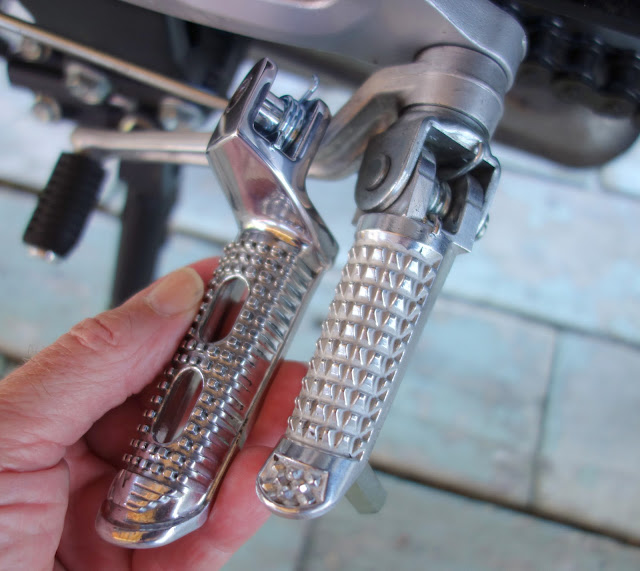 About 20mm longer and 25mm lower than OEM pegs


The first job was to get a builder's level out so that the height difference from standard footpegs to both the gear change and brake pedals could be measured and replicated with the new lower pegs. With that done, the old pegs were removed and the new ones fitted in under 10 minutes, including applying lubricant.  At this stage, I'm not going to transfer the "hero blobs" from the OEM pegs until I've tried them out on a reasonable distance run.

The final stage of fitting was a bit more time-consuming.  The gear pedal was easy to adjust to the new height - just undo two nuts on the change linkage, turn the threaded rod until the right measurement was attained and lock it all up again. 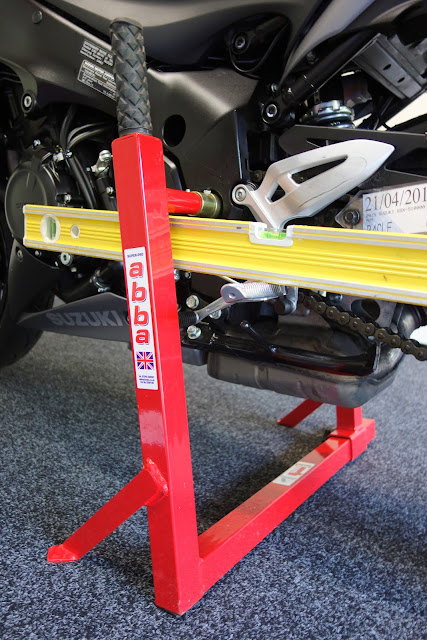 Setting up the gear linkage

The time-consuming bit was setting up the brake position.  To get the correct measurement, I had to cut a few mm off the thread of the brake cylinder clevis pin and it was easier to slacken off the whole footrest assembly to do this. The old pegs can still be re-fitted even with some thread removed so no worries on that score. The fiddly bit was adjusting the rear brake light activation switch to compensate for the new position of the brake lever - fingers like ET would have been really useful to stop getting cramp in them!!

The whole job took less than an hour and a half to complete, looks great and feels really comfortable - now to try it on a decent run! 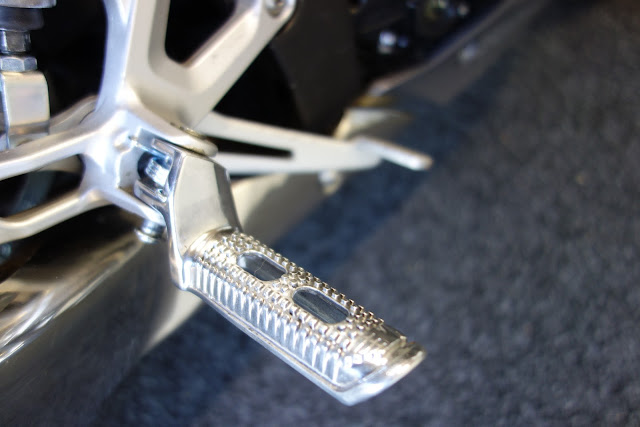 A Visitor to our Shores
The world is indeed a small place.  Jennie and I were on Vancouver Island in 2014 as part of a trip through Canada and Alaska.  Because of time constraints, we were unable to meet up with fellow moto-blogger Darlene aka Princess Scooterpie who volunteers as a motorcycle instructor on the island.  However, I recently received a message from Dar saying that a fellow instructor from the island; expat Kiwi, Debra Roberts would be visiting family in our neck of the woods so lunch at our place was hastily arranged.  Being bikers and both involved in training, we instantly clicked and it was non-stop chat.  Serendipity at its best, just a shame that we weren't able to get out together for a ride. 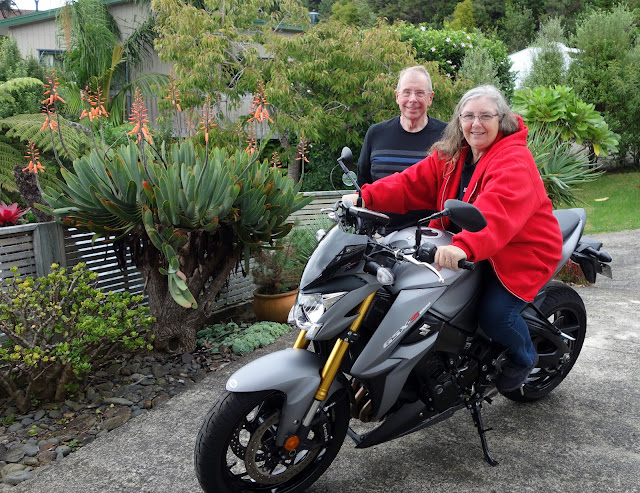 How we choose our bikes
And now for something completely different which might strike a chord.......

Y'know...... choosing and buying a new bike is normally a long(ish) process and involves much poring over brochures and specs, reading reviews and so on, culminating in a series of test rides. Most of the previous sentence involves dispassionate analysis and logic which is actually pretty straightforward.  Buying with the head is one thing but to be truly satisfied, a purchase involves both head and heart, doesn't it?   A darned sight harder to define what it is about bikes which touch the heart as it's such a personal thing.

When I bought the Street Triple, a Ducati Monster, Speed Triple and Thruxton Bonneville were tried too but it was only the Street Triple that made me say "I want it and I want it NOW".  Let it be said, it wasn't very long into the test ride either!  Six happy years ensued and it would get a pat and smile when I walked past it in the shed.  It was only replaced because the km's were getting up a bit but also because I had Chief Executive Permission to do so.  (Guys reading this may nod knowingly).

I won't go into the details of looking for a replacement as it is is covered HERE but the selection process was unusually rapid.... almost instant in fact.  The test ride of the GSX-S1000 revealed a bike with sensational performance, lots of features such as traction control/ABS and it had great ergonomics.  What was not to like, so I bought one. 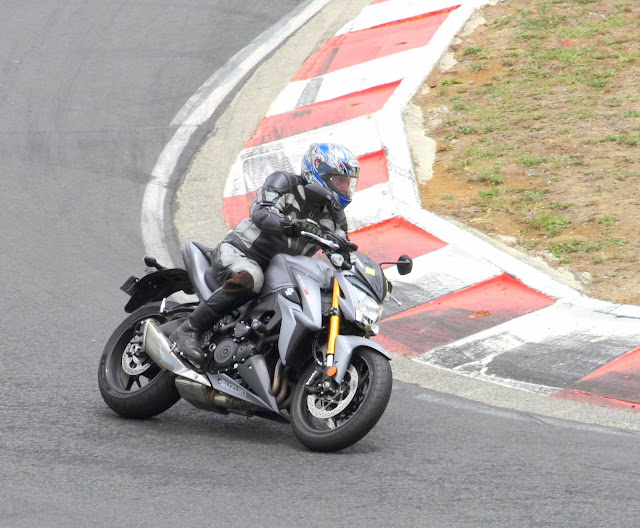 Geriatric biker goes out for a quiet ride

Six months and closing on 10,000 km from new, I've sorted the suspension, it's now got good rubber, done a trackday and lots of mentoring with the Institute of Advanced Motorists.  A worthy replacement or step up from the Street Triple? Well actually, that's highly debatable and if pressed, I might say no.  I'm certainly not disappointed with its performance but it's not light years better than the Street Triple for my everyday road use. So what's the reason then?  Riding it is enjoyable and fun, but it's not exhilarating.  Bland is not quite the right word, not feeling "as one" with the bike is not quite the right description either. To be candid, I can't give you any concise specifics that make sense, but in a nutshell, there's no emotional connection.  Looking back on the test ride, it didn't "sing" to me like the Triple did and should have listened to my heart.  It gets properly cleaned and detailed because I'm an anal retentive engineer, not because it's a labour of love.  It doesn't get patted when I walk past it in the shed and that's probably the most telling thing of all. This is all a bit of a ramble but hopefully, other riders will make sense of it and understand.

Does this mean that I'm looking to replace the Gixxer?  Well no, at least not in the immediate future but it's unlikely that ownership will continue for more than another year or two at most. It's enjoyable but I want more than that. Looking at the 1200 Bonneville press releases, there's a bit of a heart flutter probably based on nostalgia, but who knows what will whisper in my ear when the time comes?

S'pose you could sum it up by saying that if you don't use both your head and heart when getting a new bike, it might not be a match made in heaven.  The path to true love is rarely a smooth one!