For Nick and Angus MacPhail....


This post was written after I said I'd stopped blogging for an indeterminate period, BUT ..........

I got home yesterday to find a wonderful link to the past in the Comments section of my previous post from Nick MacPhail who lives in the Channel Islands between the UK and France.  We've never met but may well have been within a few metres of each other in the days when I drag raced at the same time as his brother Angus - what a small world it is these days!  Angus' bike, Ag's Barra, was featured in a photo I took and put in an earlier post about innovative engineering HERE .  I won't repeat what Nick said as you can read it for yourself in the comments section of the previous post.  It's well worth reading and also, the YouTube link to Angus' fantastic drag bike "Jade Warrior" HERE  is a rare treat.

Yesterday, I accompanied my mate and riding partner Davey Uprichard who lives near Wellington up to Auckland for his IAM advanced riding first assessment ride under the eagle eye of Philip McDaid, Chief Examiner.  It was a real win-win day as in the morning, we were able to spend a few hours at the annual classic race meeting at Pukekohe, just south of Auckland in the company of another great mate and riding partner, Dave Easey from Auckland.  For a country of around 4.5M population, some amazing bikes come out of sheds at this time of the year, many of them startlingly innovative.  So Nick and Angus, this post is for you guys in recognition of your appreciation of both smart and rare engineering! (This is only a very small sample of the bikes that were present, both in the spectator park and in the pits). 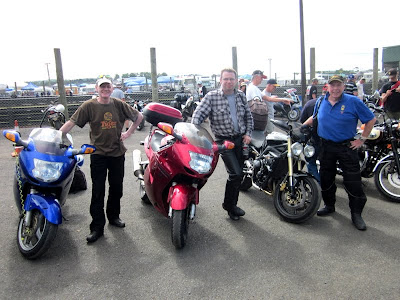 Dave, Davey and yours truly at the track 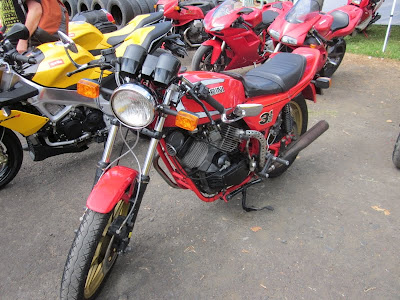 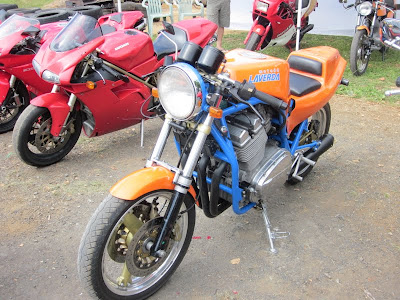 Laverda Jota 3 cylinder in what looks like a Spondon frame 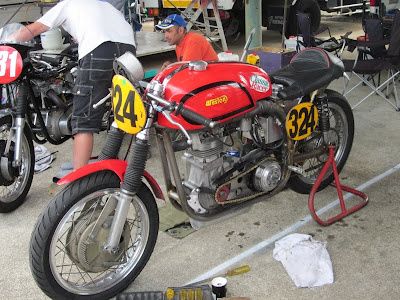 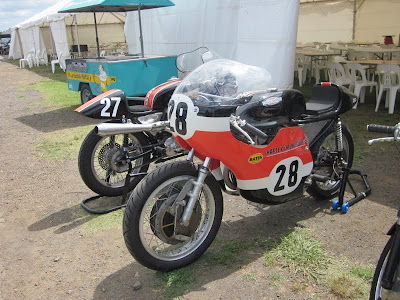 The photo below is of a Brough Superior lining up on the dummy grid for a vintage race.  All these bikes are raced hard with no concession for age or scarcity.  Given that the price of a Brough at a classic bike auction would probably be greater than the cost of a modern factory-supported superbike, the owner has exceedingly large balls!  He's also to be congratulated for not wrapping it in cotton wool and for sharing it with the rest of the population. 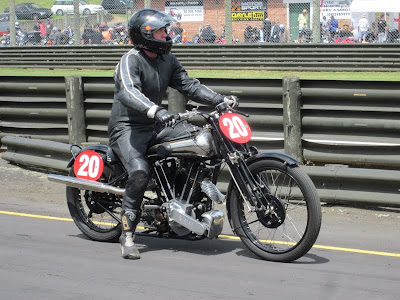 The bike below is one of the rarest bikes you'll find - a desmodromic-valved Manx Norton.  It was built by a Kiwi called Brian Thomas to a design by Doug Hele, who was a legendary designer at both Norton and Triumph.  It was their correspondence and friendship which led to Doug's bike being re-created.  A stunning piece of workmanship. 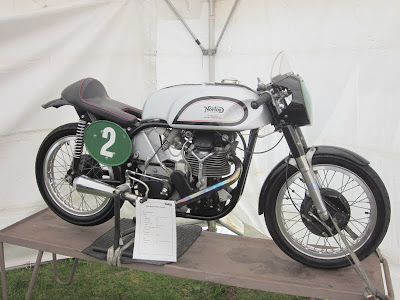 The next bike was my personal favourite - a Kreidler 50cc racer from the 70's.  Winner of numerous world championships, the bike produced in the order of 11-15 horsepower at close to 17,000 rpm!  The engineering is simply exquisite and when you realise just how small it is, finding a talented rider with the weight of a 10 year old child must have been a nightmare!

One of the best examples of engineering perfection anywhere 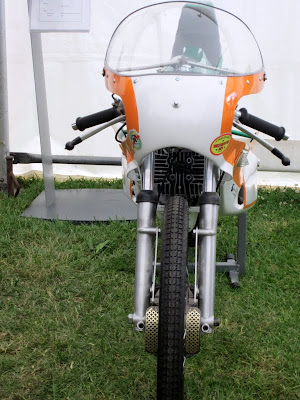 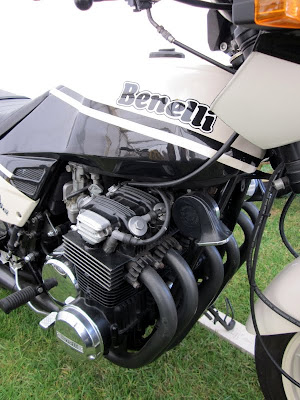 Another exceptionally rare motorcycle is the bike below.  The Hesketh V twin was produced in the UK by Lord Hesketh who used to be involved with F1 car racing.  Manufactured in the 1980's, it was overpriced, unreliable and soon went out of production.  Nonetheless, still a good example of someone trying to innovate.

A Hesketh V 1000 in perfect condition

My mate Paul zoning in

Those photos end the relatively short stay at the Pukekohe race track.  We said our goodbyes to Dave Easey part-way up the Auckland motorway whilst Davey and I headed north west for a date with the Chief Examiner of the IAM.  Those who have previously read of the stress I went though to pass my tests will remember that the examination criteria are based on UK police rider standards - a daunting task for anyone!  I was enjoying Davey's discomfort and deliberately hadn't filled him in with the details.  If I had to suffer the pangs of apprehension, he bloody well could too - that's mates for you! It's interesting that one of Davey's first actions on arriving at Philip's premises was a rapid visit to the toilet.  You may well think it was a nervous one, but I couldn't possibly comment, hehe!

However, Davey and Philip are both Irishmen from not too far apart and within seconds, had lapsed into accents which took more than a bit to follow - probably to keep me totally in the dark!  After explaining what was going to happen and equipping Davey with a radio, we set off on an assessment ride of well over 100km covering a mixture of motorway, urban, and all forms of countryside riding.  It was my intention to sit out back, sniggering and chilling out but Philip put a stop to that by saying that it would be good observer training for me!

Philip and Davey about to set off

Half-way through the ride, we stopped for the first de-brief.  Philip told a delighted Davey that he was already riding at an advanced level and that the improvement areas were only small, rather than any major errors in technique.  Hardly surprising to me, given that Davey and I have ridden together so much and that I'd trust him with my life.

For the second part of the ride, Philip put me directly behind Davey to take the main observing role, but cunningly being able to watch me at the same time - no pressure then!!!  Because Davey is such a darned good rider, there (regrettably, haha!) wasn't an opportunity to "ping" him for anything major and it was a thoroughly enjoyable ride in a relaxed atmosphere.  Returning to base, there was a full debrief and Philip asked me to complete the formal report with 3 improvement opportunities for Davey to work on.  He was congratulated again on such a great performance, particularly for first time up and invited to join IAM as an Associate.   All that remains is for me to allocate him a mentor in the Wellington area and enjoy hearing about his rapid progress through the forthcoming check rides.

All in all, one of those sublime days - away from home riding bikes for 12 hours in great company, covering almost exactly 500 km and seeing some fabulously rare motorcycles to boot.  Oh, and returning home to local smoked fish and marinated mussels as an entrée and baked sticky ribs as a main course, washed down with good beer.  Real man-food courtesy of Jennie, bless her!!

Sincere thanks too to Philip for giving up his time on a voluntary basis to spread the message about high level safe riding, it's hugely appreciated.