Once a year, we meet up with our friends Georgina and Mike from Wellington and spend a few days exploring some part of NZ together.  Regular readers of the blog may remember last years' trip to the top of the South Island.  This year, our friends weren't able to travel far because of other commitments but as we weren't all that familiar with the surrounds of our capital city, they arranged a local itinerary and kept quiet about what we'd be doing over the weekend.

Leaving Coromandel last Friday, we set off for Wellington, some 650 km away in Jennie's Jazz Rally Sport.  Most of the roads in NZ are a lane in each direction interspersed with overtaking lanes every few km.  It's only near cities that motorway-type roads are normally encountered.  The most interesting part of the trip down for us is the so-called Desert Road.  This is part of State Highway 1 in the central north island.  It sits at between 2000-3200 ft  (600-1000 m) altitude and is part of a plateau with 3 active volcanoes on it.  There are skifields on the volcanoes (fun, fun!) and apart from herds of wild horses, the only other significant occupants are the military on manoeuvres.  It's a wild, lonely place but stunning in good weather.  Not so nice in bad weather as we were to find out on the return home! 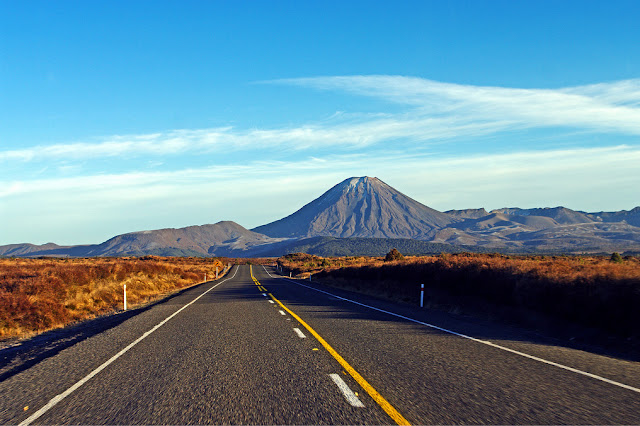 The next day was spent exploring Wellington's south coast, apart from a drive to a lookout at the northern end of Wellington Harbour.  It ain't known as Windy Wellington for nothing and we could see a stormy weather front rolling in from the south. 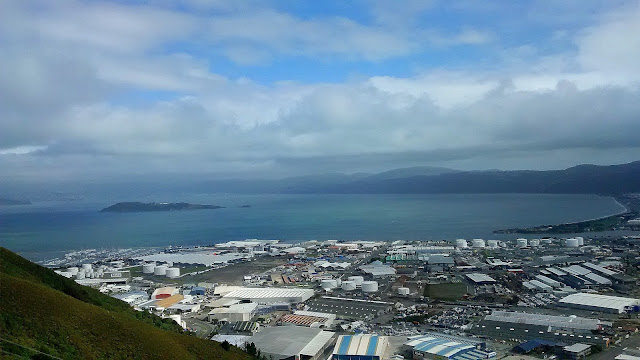 By the time we got round just east of the city, it was blowing an absolute gale and pouring down which arguably, is the best time to see Wellington's south coast.  As cities go, Wellington is really pretty.  The compact CBD is pretty much on the level with the suburbs around the hills surrounding the harbour. 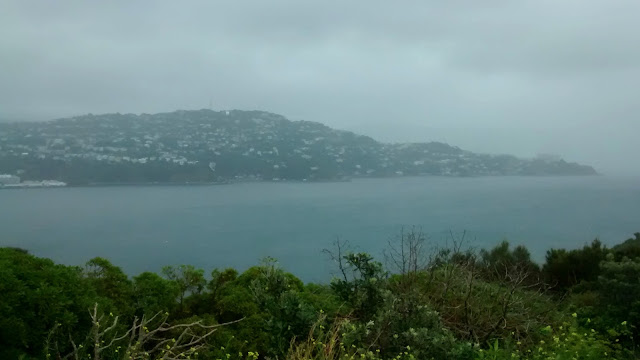 Looking across to Mt Victoria as another squall comes through


The storm front took an hour or so to pass through and better weather to come in behind it but the kite surfers were having a ball in Lyall Bay getting big air and attaining some impressive speeds. 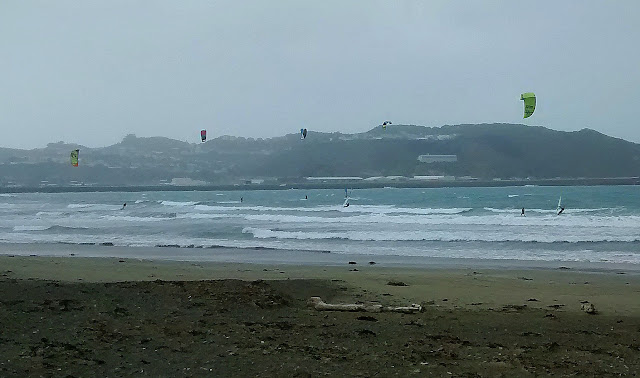 Screaming along in Lyall Bay 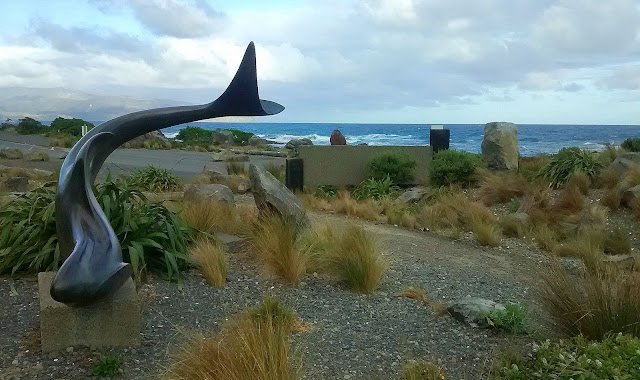 Bronze artwork called "Frenzy" - I wouldn't want to meet it in the water!

After the weather front had passed through, we continued the tour of the south coast and then had an early meal at a Thai restaurant as our hosts rather mysteriously told us that we were going to the movies but refused to say more!

We pulled up in the dark in a normal suburban street and noticed a few people strolling down the driveway of an older house and where "normal" people have a garage or workshop, there stood a movie theatre!!  It's called Time Cinema and the original occupant of the house built it over 35 years ago for family and friends to enjoy old classic movies in a relaxed setting - how absolutely fantastic!  As well as a 40 seat movie theatre in original 50's decor, the reception area is packed full of memorabilia such as movie cameras through the decades, classic posters and so on.  Here's a peep..... 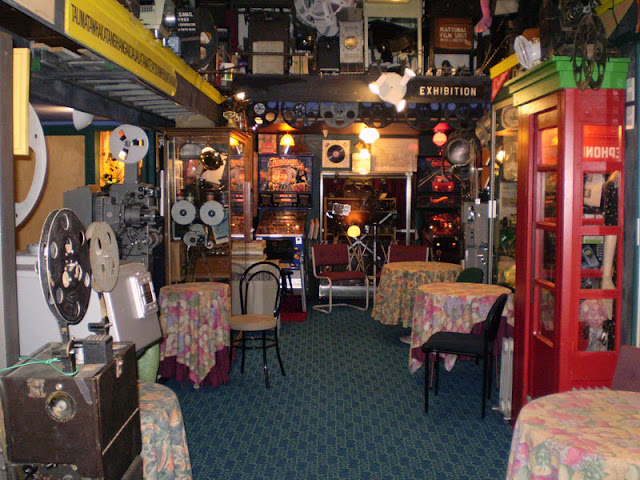 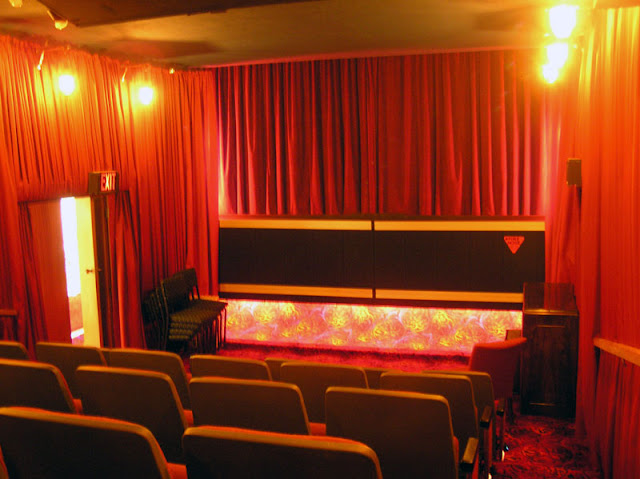 The first half of the evening was taken up with footage by both locals and professionals of the Wahine ferry disaster 50 years ago.  The Inter-Island ferry Wahine foundered on rocks at the entrance to Wellington Harbour in one of the worst storms ever to hit NZ.  Over 50 people lost their lives and there would have been many more had it not been for the heroism of rescuers.  A tragic event but fascinating to see the footage from that time.

On a much lighter note, the interval was about 30 minutes long and here was yet another delightful surprise!  For the modest admission price of NZ$10 (US$ 7, GBP 5), supper was thrown in too with a distinct late 50's theme.  The savoury was crackers with a slice of processed cheese on top, adorned with a slice of tomato.  This was followed by slices of sponge cake and fruit cake and cups of tea served from a giant pot.  Absolutely kitsch, absolutely fabulous!

Returning to the theatre room to a hand-rung bell,  the nautical theme continued with a showing of the original black and white Titanic movie from 1958 called "A Night to Remember".  Among the stars was a very young Honor Blackman famed for her later roles as  Cathy Gale in the Avengers TV series and Pussy Galore in Goldfinger.  Honestly, it was far more gripping than the later version, better acting and the special effects were much better than you might have thought from a 50 year old movie.

What a treat and wonderful surprise it was to be introduced to something as delightfully quirky as Time Cinema - I still grin when thinking about it.  Definitely a highlight of the trip.  The world needs places like that!

The next day saw a round trip west of Wellington to a small beach community called Makara west of the city as we'd never been there before.  A biker's paradise with a narrow, twisty road running in deep valleys.  Certainly not much room for error though, especially if anything coming the other way decided to cut blind corners.  The intent was to have lunch at the cafe there but unbeknown to us, the cafe got destroyed by the recent Cyclone Gita. 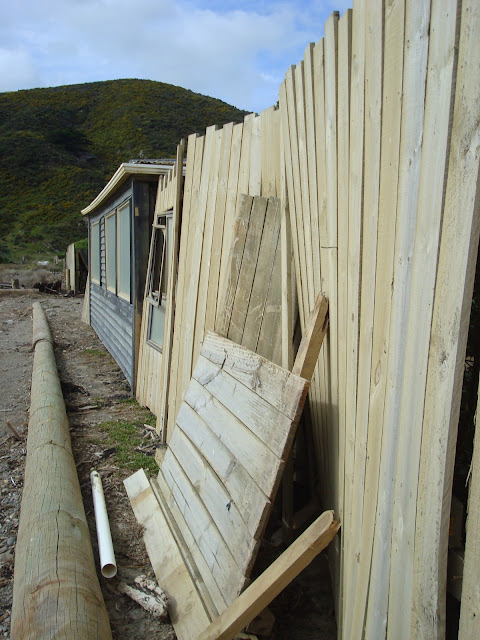 Remains of the cafe wall

Oh well, it would have to be a late lunch in Wellington as there was some more exploring to do. 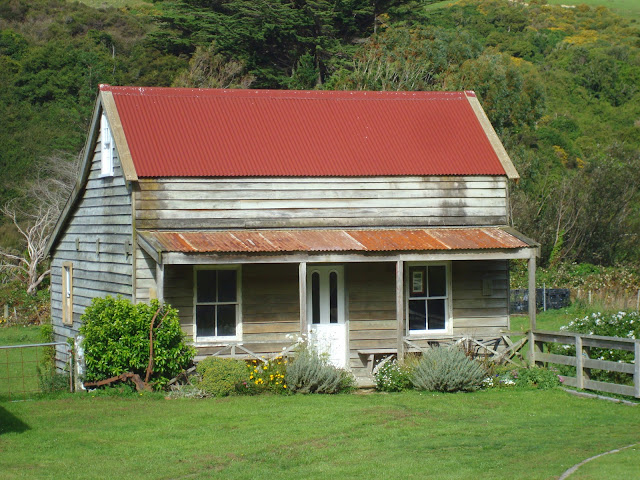 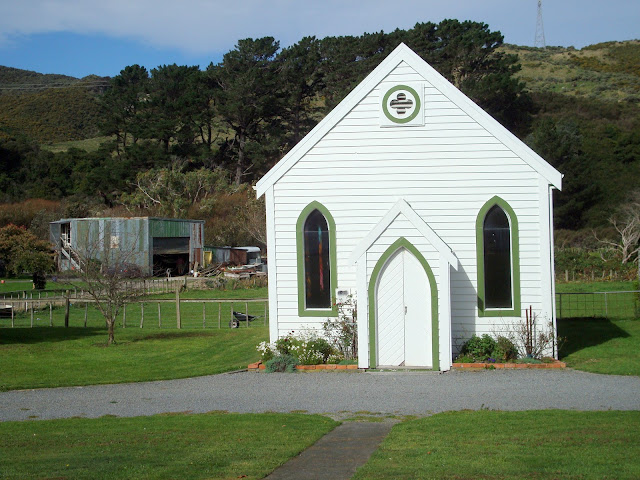 De-consecrated old church at Makara - not for a big congregation! 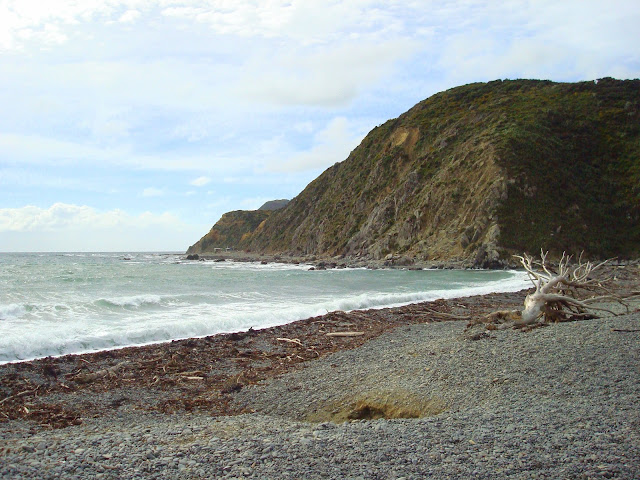 Before heading back to the city to find something to eat, there was time to visit the wind farm overlooking Makara and the immediate surrounds - no wonder given that the west coast in this area is renowned for rough weather!  Apparently, this farm is capable of powering 70,000 homes. 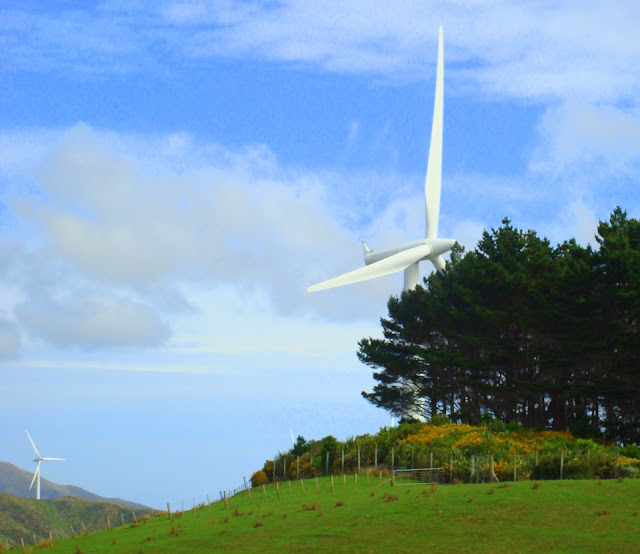 A heck of a size compared with the trees 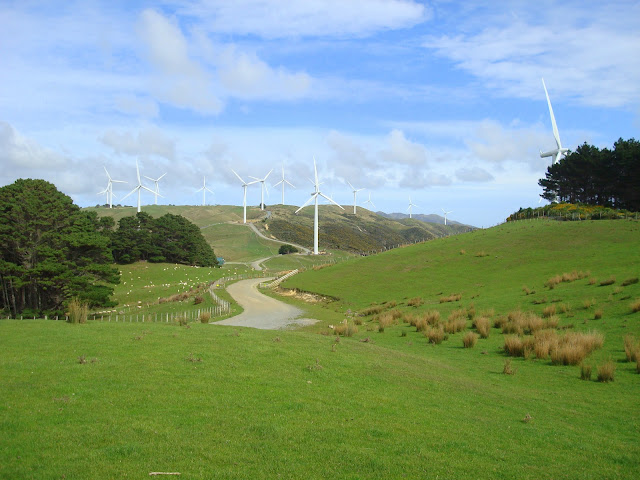 Scattered along the ridge line for several km 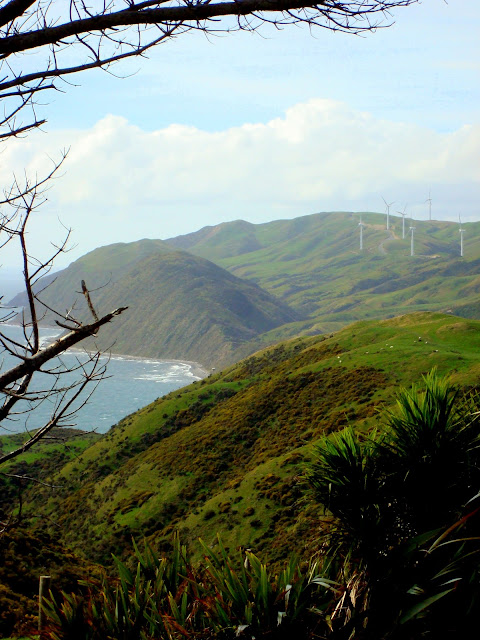 Not really an eyesore on the landscape

On Monday, we said goodbye to Georgina and Mike and headed about 50 km north to catch up with old friends Bill and Marg at Paraparaumu.  Isn't it funny with really close friends.....  don't see them for at least a year and the moment we see each other, it's like you've never been away.  Guess that's part of the definition of real friendship.

After lunch, Bill and I hopped on mountain bikes for a bit of exercise.  There's a fairly new motorway north of Wellington and as part of the overall design, the national roading authority, NZTA; has also built a gravel cycleway which runs alongside it through nicely landscaped berms.  In fact, kudos to NZTA for the planting of millions of native shrubs all along the motorway.  Not only that but they have deliberately established flight corridors of trees for birds so that they can travel with shelter and nesting between the coast and mountains in an uninterrupted manner.  Our friends have already noticed the increase in bird life around the area.  Furthermore, the rain runoff from the motorway has been channelled into man-made wetlands which are already being colonised by black swans, geese and ducks.   A great example of roads being built with strong environmental considerations.  They don't have to be eyesores. 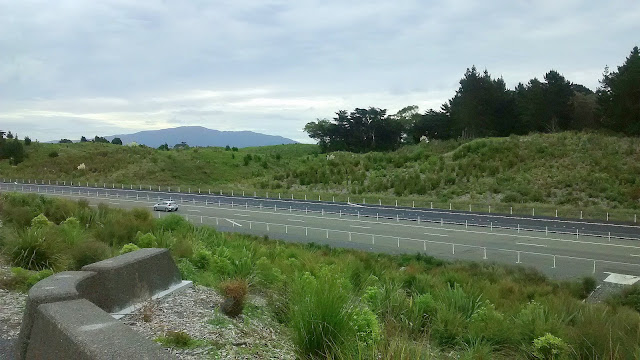 Part of the motorway with dense planting of young native shrubs 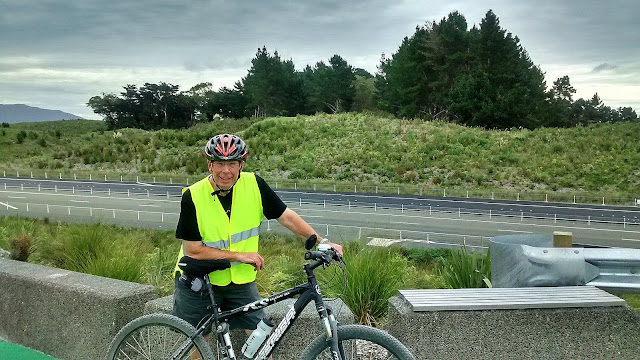 On two wheels of a different kind!

Early the next morning, we left to drive the 600-odd km home in some of the worst conditions that we have ever encountered - gale force winds, driving rain with limited visibility, thunderstorms and even a tornado not far from where we travelled.  Some parts of the north island sustained quite a bit of damage from the wind, with one gust recorded at 213 km/hr!  Driving in those conditions is all part of the fun, albeit pretty tiring keeping the concentration levels up for 8 hours.

So no motorcycling this time around but as they say, a change is as good as a rest!  Seeing and doing things you haven't previously experienced is always good for the soul.