A social ride and a bit of nostalgia

It's been an amazing summer for riding in NZ.  Relatively little rain, long hot days..... just about perfect.  Where we live on the Coromandel Peninsula, it's one of the great biking roads in the North Island.  Around 190-300 km (depending on route) of twisties and sweepers with almost no straights. Coupled with mountains and roads running right by the ocean, it pays not to be distracted by the scenery unless you're in cruise mode.

The only downside is that during the peak of summer, it's chokka with tourists, many of whom have no idea how to stay on their side of the road whilst gawping at the scenery.  With Autumn on us and kids having gone back to school etc, numbers have declined - perfect for low volume traffic again, especially on weekdays.  It was therefore great to receive a phone call a few days ago that a couple of fellow Institute of Advanced Motorists Observers (Instructors) from Auckland were planning take the day off  on Friday and ride the Coromandel Loop.  Would I like to join them with an unsubtle hint that lunch at our place would be nice too, haha!  (a glass of water was the term actually used).

It's a while since I've had a purely social ride so jumped at the chance to have a run with fun people I trust implicitly.  Leaving Coromandel and heading for Kopu to meet my mates, the coast road was spectacular and almost totally free of traffic - magic! 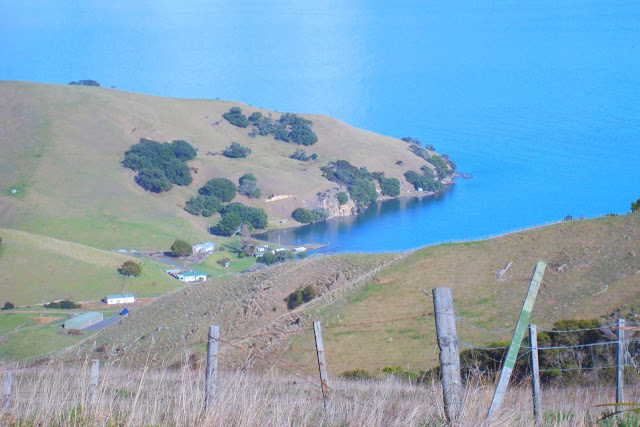 Firth of Thames from the Manaia Hill

Meeting up with Morne and Harald in Kopu, there was a delightful surprise in store.  Morne was on his usual GSX-R 750 but instead of Harald being on his new Honda Crossrunner, he had turned up on his classic superbike from the late 70's and early 80's - the legendary 6 cylinder Honda CBX-1000. What an absolute treat to see one on the road again, and for it to be used like it was supposed to be used! More on the CBX shortly.

After quick greetings and a drool over Harald's bike, I lead the guys over to Tairua where we would stop for coffee and a chocolate brownie.  What a fantastic sight in the mirrors of the CBX being cranked right over in the twisties!  I should also mention that when I joined IAM in 2011, Morne was one of my principal mentors and having him in my mirrors used to make me highly nervous waiting for his critique.  Those nerves have gone but there was initially a sense of unease as it's impossible for an Observer to stop analysing people's riding, even subconsciously.  Oh well, better just turn in what will hopefully be an immaculate ride up front then!

Stopping at Tairua was a good opportunity to look at the CBX.  It has done close to 100,000 km and despite them allegedly requiring a much higher maintenance regime than modern bikes, Harald's has been bullet-proof.  It's had one complete engine strip but everything was in perfect working order. Original rear suspension was replaced with Konis many moons ago and non-OEM mufflers, but the rest is pretty much original. 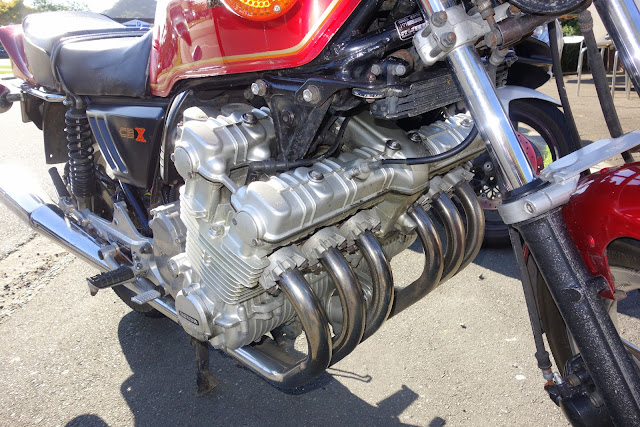 At my height of 5'8", owning one would be a nightmare.  The combination of a tall(ish) wide seat, a dry weight of over 270 kg with a high centre of gravity is a recipe for disaster.  Harald is much younger than me and must be close to 6'6" but even he is super-careful when manoeuvring at low speed.  Compared with modern bikes, the forks look totally incongruous.  Even late model 250 forks are more robust.  It didn't seem to stop Harald pushing it along at a fair lick though, even though he left a decent following gap so that the outdated disk brakes had a chance of slowing that huge mass! 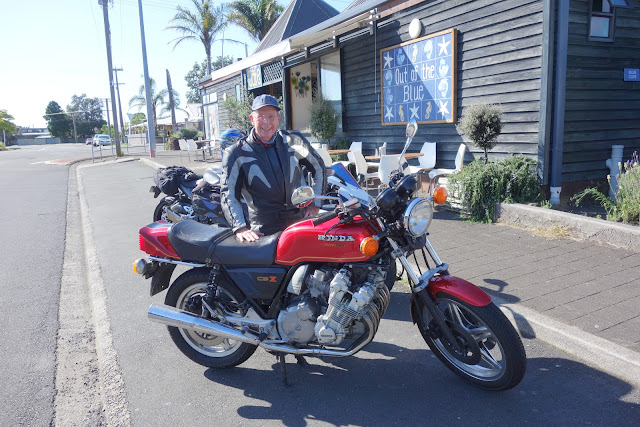 The writer alongside the CBX - anyone got a stepladder?

From Tairua village, it was a brisk scamper up to the coastal town of Whitianga and the picturesque harbour as Harald hadn't been to the northern part of the Peninsula before. 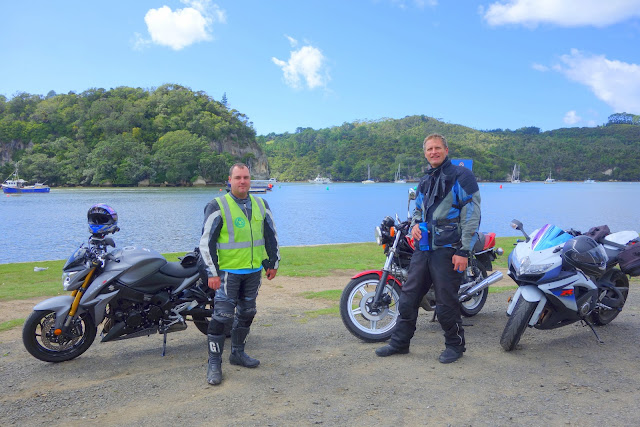 Taking in the sights at Whitianga

From there, it was back to our place just outside Coromandel village for lunch, with a quick stop at the Coromandel Range viewing spot which looks down on Coromandel Harbour. 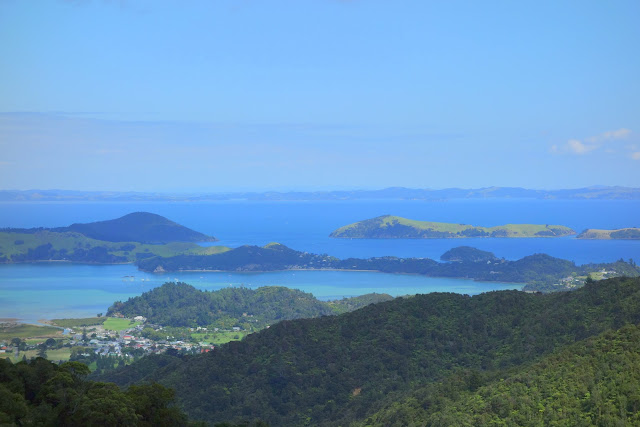 Coromandel Harbour from the lookout

A leisurely lunch on our deck followed, with plenty of water and juice to fix the inevitable dehydration from riding in high temperatures with leathers. 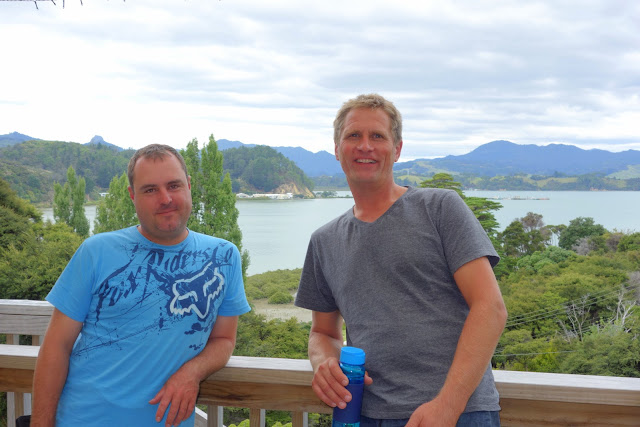 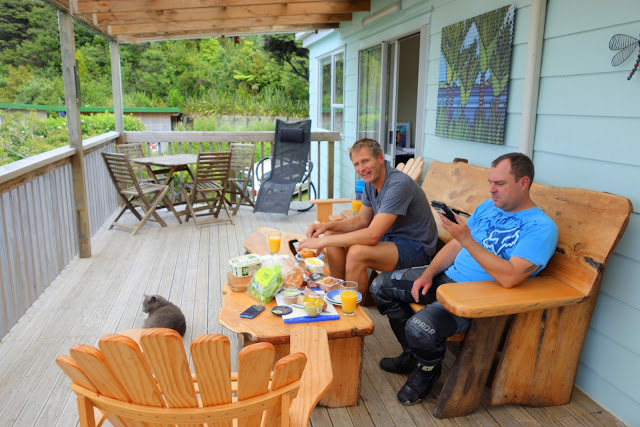 Chilling after a hot ride.  Thomas the cat waiting in hope of treats...

That was the end of the ride for me as the guys got ready to head back to Auckland and the gridlock which is Friday afternoon traffic.  Magnificent company, great riding  and seeing one of the world's iconic bikes - what could be better for the soul? 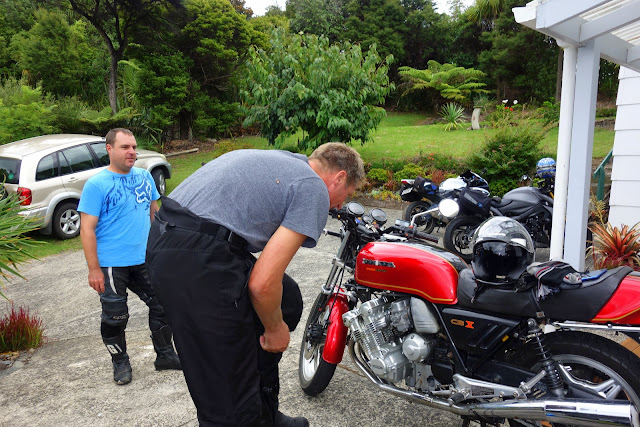 Harald inspecting for inconsiderate squished bugs on the paintwork 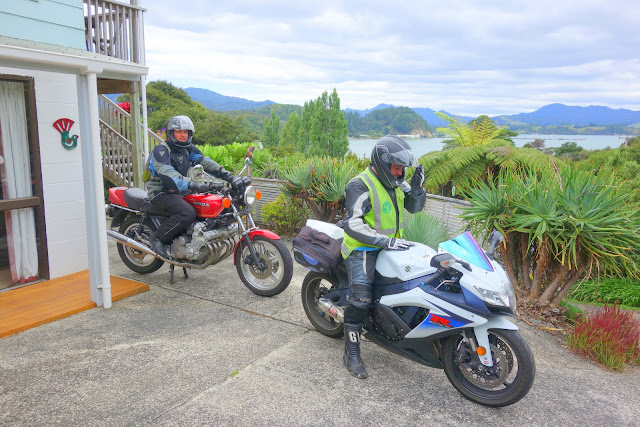 Harald and Morne about to depart for Auckland

When Morne saw the photo above, he said it looked as if he was making the sign of the cross before setting out.  I said that it was totally appropriate given that our drive is extremely steep and that there would be a CBX with the mass of an oil tanker and indifferent brakes right behind him!