Stopping to smell the roses....

Tired, a bit jaded and certainly not helped by a summer cough and cold which is proving difficult to shake off......

A total of 17,000 km covered this year alone on mentoring Institute of Advanced Motoring members to pass their police roadcraft advanced test and for some, continue on to Observer (instructor) training and passing yet more exams.  It's massively satisfying and a real privilege to see riders raise their personal standards which has got to be good in terms of helping improve NZ accident statistics, not to mention enjoying riding far more.

However, I suppose it's a natural human condition to focus so hard on the tasks ahead that we all run a risk of not getting enough balance in our lives and I'll admit to falling into that trap. All work and no play etc....

There has been virtually no social riding this year where one could ride just for the fun of it with friends, simply enjoy their company and engage in the normal riding banter.  I was therefore delighted to get an email from Lee, an IAM friend from the Auckland region saying that he was bringing his relatively newly-purchased Moto-Guzzi 1200 Sport to the small town of Morrinsville in our region for its first major service and would I like to meet up for a weekday social ride after the service? WOULD I EVER!!!!  It so happened that my Trainee Observer and good friend Rob, who is currently waiting to take his full Observer test was also available so we arranged to meet up and then ride the 130-odd km south to have lunch with Lee and then all ride back north together.  I hatched a cunning plan to lead the north-bound leg of the journey through all the twisty back roads of the north Waikato region where there is minimal traffic and a corresponding absence of the Highway Patrol!

Meeting with Rob at the southern end of the Coromandel Peninsula, we headed for Morrinsville to meet up with Lee at the Moto Guzzi, Aprilia and Husqvana dealer.  We arrived a few minutes after the service had been completed so it was time to drool over the Guzzi.  The standard of finish and attention to detail was excellent with enough "quirkiness" in the design to make it stand out from other bikes. 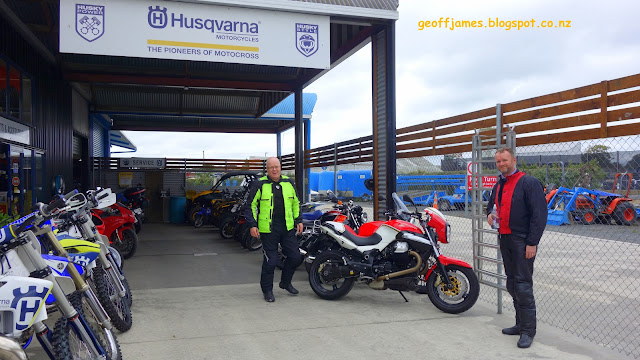 Lee is a naval officer and over lunch, it transpired that the Guzzi had become cargo in the hold on a recent visit to Australia so that a bit of exploring of Oz could be done whilst the vessel was in port - very enterprising!

By way of explaining the photo below, Morrinsville is a small town in dairy farming country and the main street has numerous plastic cows with all sorts of colourful designs painted on them.  There was one right outside the cafe we were eating at - perfect for a photo op. 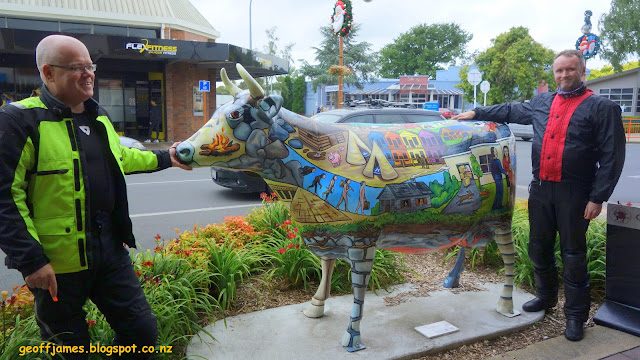 Milking a pun for all it's worth

It was soon time to get going and with me leading, it was time to switch the GPS on as it would be soooo embarrassing to get lost on the tricky back roads in my own territory.  Heading north, it became apparent pretty quickly that the Moto Guzzi is actually a potent weapon on twisty and sometimes bumpy roads, despite it "only" producing a little over 100 bhp.  The almost flat torque curve coupled with rock-steady handling makes it an extremely quick bike in those conditions.  Coupled with a tank range of well over 300 km and great ergonomics, it's a bike that can cover a lot of ground without fatigue.

All three of us had linked SENA comms which is an excellent way to stay in touch on a brisk ride without the need to stop and discuss things.  It's also good for being laughed at for overshooting turn-offs!  Also good for hearing Rob's Hayabusa being wound up in the lower gears - sounded great. About half way through the ride, we encountered patches of light rain and damp roads but a combination of wet weather traction control and good sport-touring tyres meant that a brisk pace could be safely maintained.  Soon, it was time for a quick photo op under heavy skies at a lookout by Lake Waikare, some 34 sq km in area. 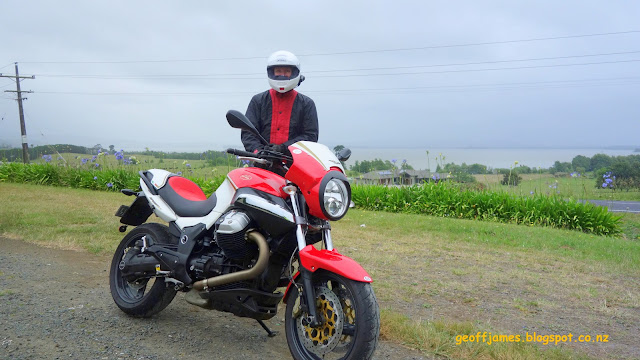 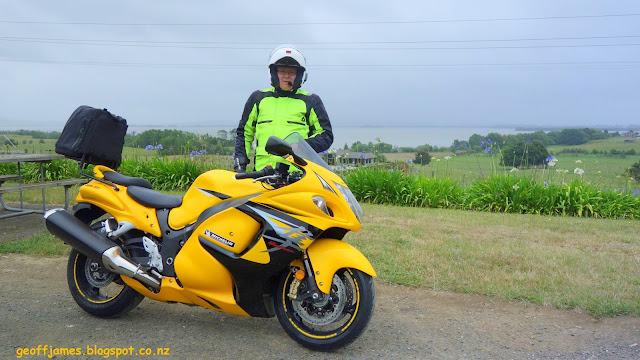 Rob and his hi-viz Hayabusa missile 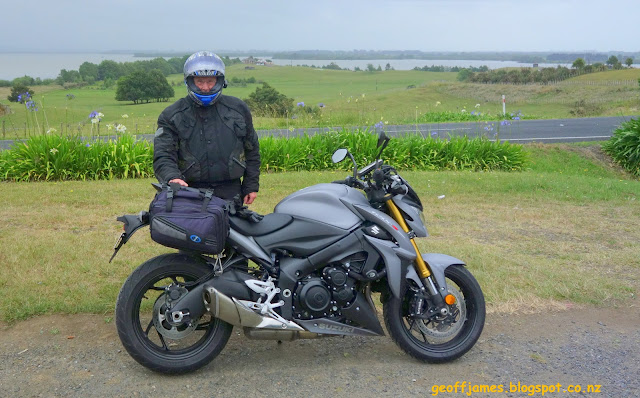 Yours truly and the stealth GSX-S1000

Continuing the 90-odd km section of twisty roads, we must have encountered just 3 or 4 other vehicles - what a treat it is to still be able to ride on largely deserted roads.  That's what motorcycling is all about!  Approaching a main highway where I was to leave Lee and Rob whilst they headed back to Auckland, we saw a Highway Patrol car sitting just off the road, no doubt watching for speedsters. We pulled in right behind him  on the basis of making a nice photo but no sooner had we got off the bikes than he departed.  Nothing to do with 3 scary bikers turning up, I'm sure! 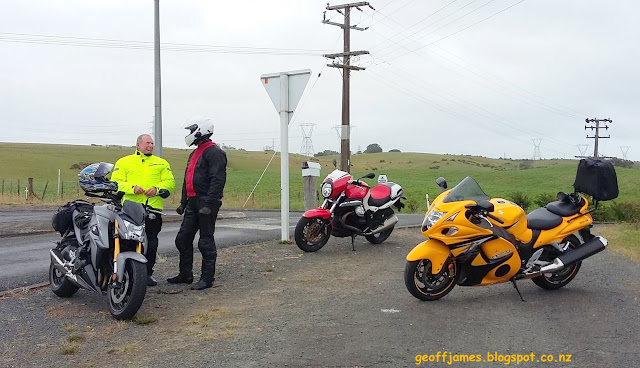 So there we are, 300 km of fun riding with mates you trust completely and what a tonic to fix a bit of fatigue which had quietly crept in.  Now fully rejuvenated and ready to tackle a full IAM calendar through January and February.  Taking time to stop and smell the roses definitely works!

With the festive season now upon us, wishing all my fellow moto-bloggers from around the world everything which you'd wish for yourselves.  Have a wonderful Christmas and a fantastic 2017.  We end with a photo I took a couple of hours ago looking towards the hill we live on with the NZ Christmas Trees, the Pohutukawa, coming into flower. There are literally hundreds of thousands of them on the Coromandel Peninsula which make for a breathtaking sight for the next few weeks. 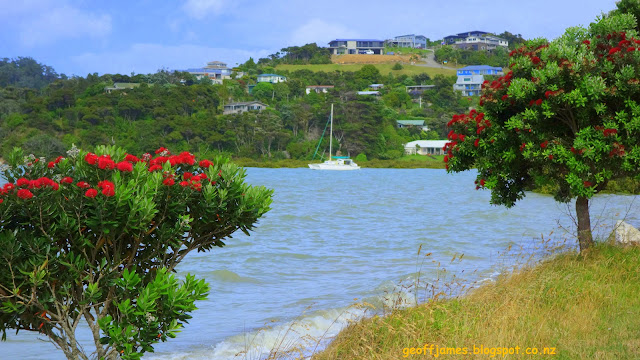