With the Northern Hemisphere spring getting underway and the reverse season starting in NZ, ScooterBob thought it was high time we got out for some more fun before he heads back north of the equator.  The first scheduled outing was to be on the Street Triple but the Chief Executive Officer (aka Jennie) decided that as the day was calm, sunny and the tides were right; a spot of fishing would be in order amongst the offshore islands.

Those who followed my previous exchanges with Bob Leong about my lack of fishing prowess compared with Jennie and his comments about my "lucky red fishing shorts", will not be surprised that SB insisted on coming along to see what went on for himself! 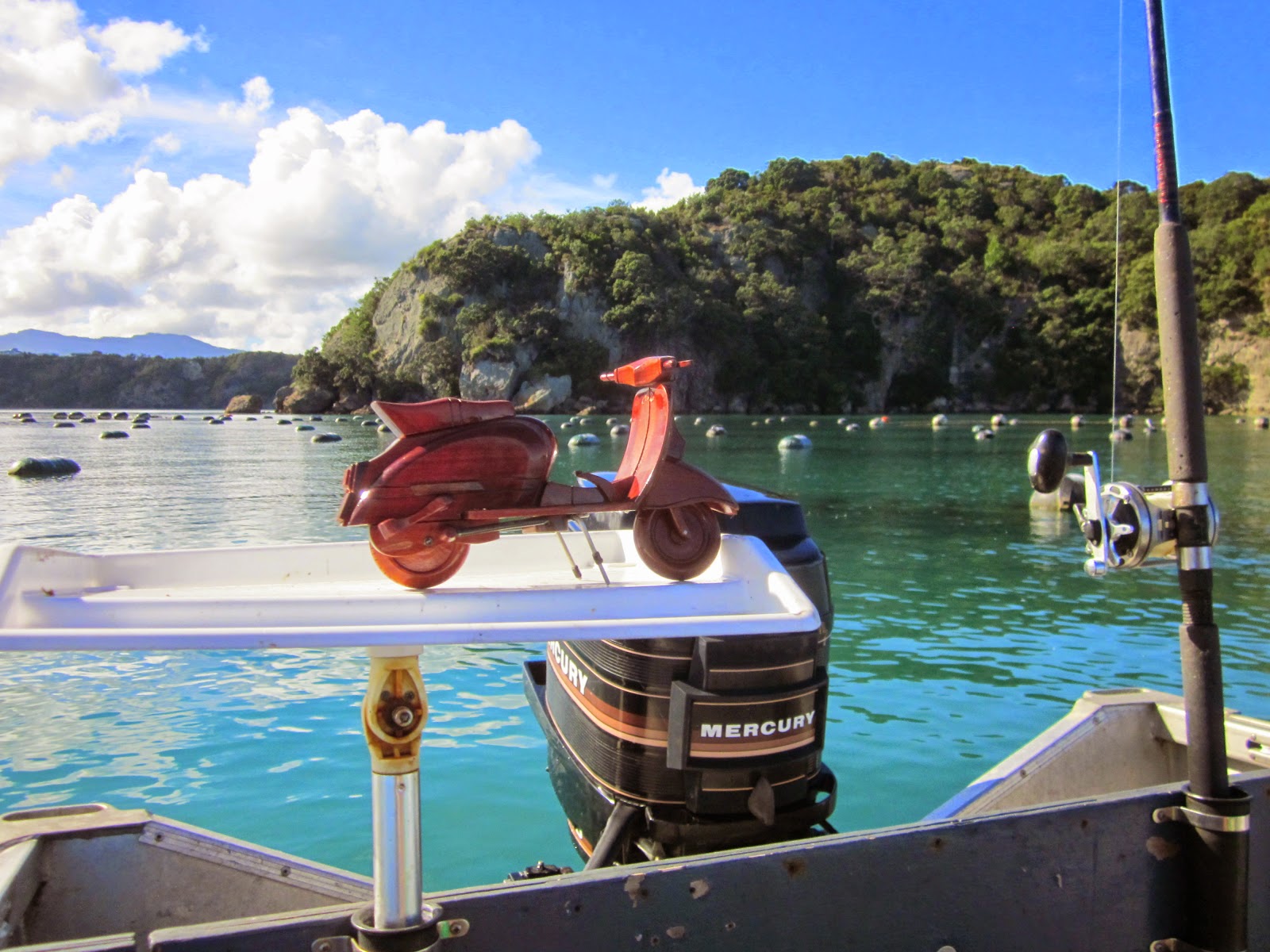 Conditions among the islands off the Coromandel coast amidst the commercial mussel farms were simply breathtaking and it really didn't matter whether we caught anything or not ....... and if you believe that, you'll believe anything - bragging rights mean everything in this household! 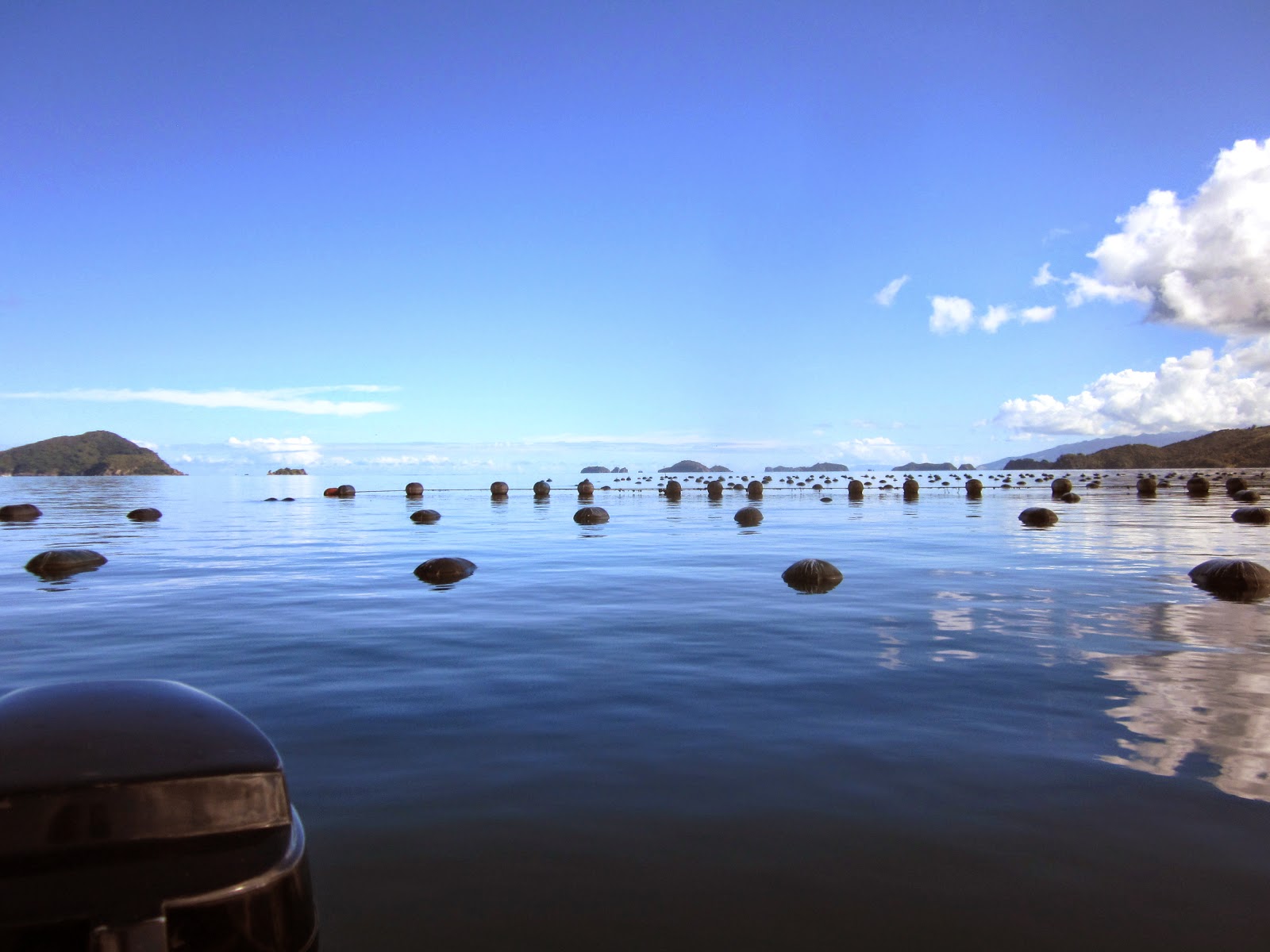 First strike to me - a big stingray but after a 10 minute losing struggle, it was easier to cut the line and let the ray go about its business and resume the hunt for snapper.  I'm sure that Bob was looking down and grinning. 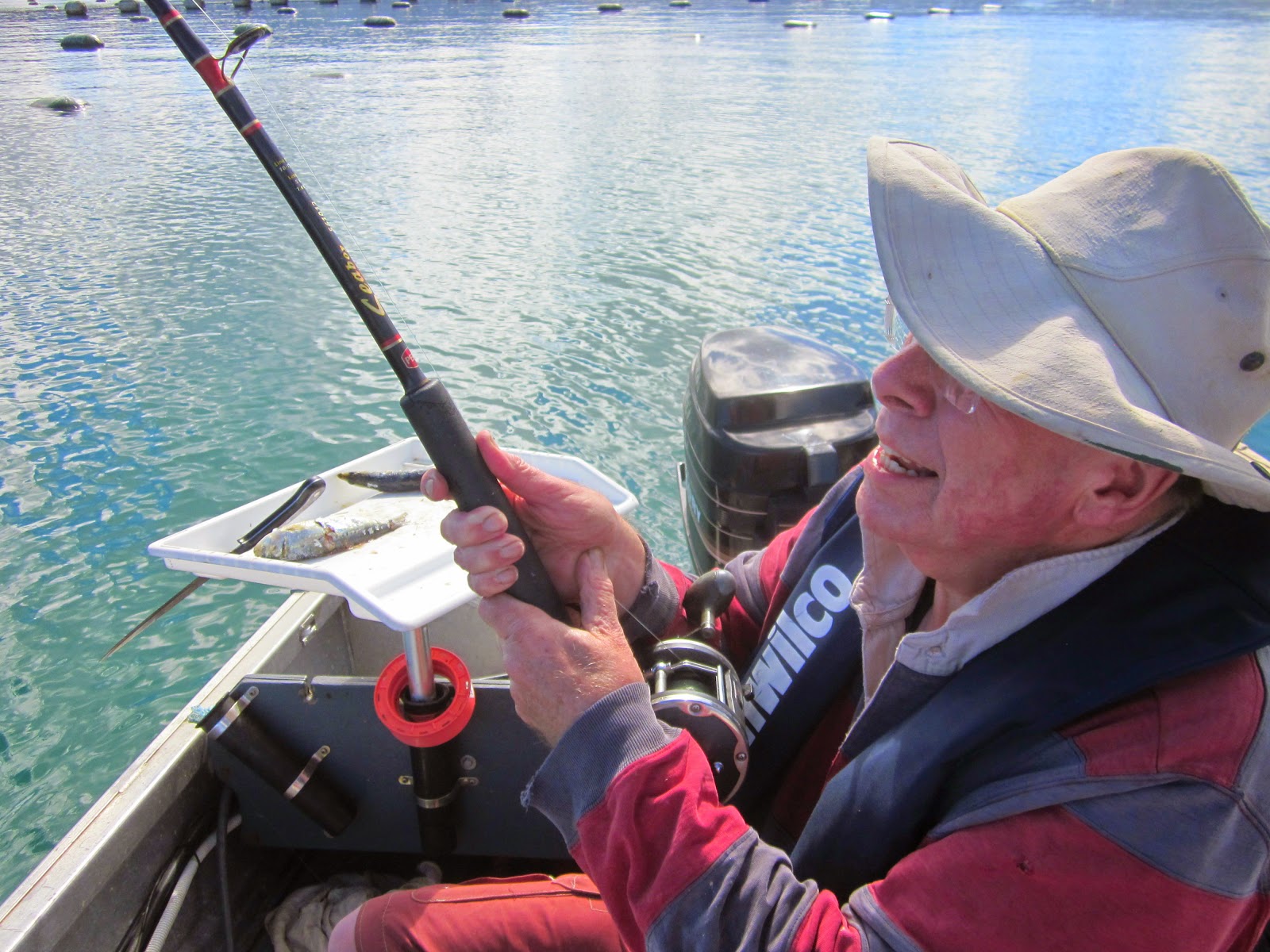 A losing tussle with a stingray

To cut a long story short, Jennie predictably wiped the floor with me with some nice pan-sized snapper and the lucky red shorts weren't so lucky.  So what's new - at least I get to share in the spoils.  ScooterBob wisely said nothing about my score or shorts. 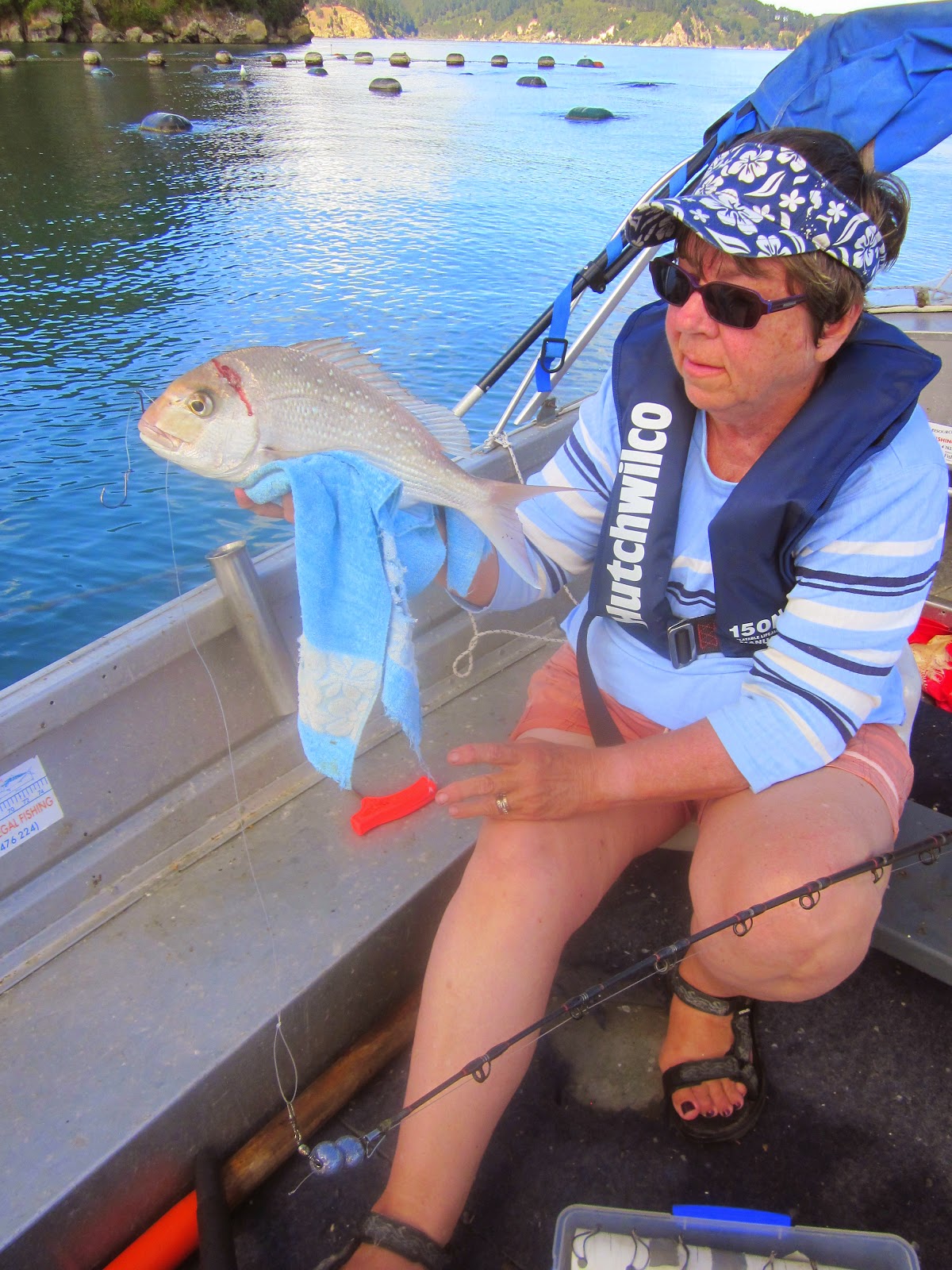 With fishing out of the way, it was time for an ummm....... "brisk" trip up the coast on 2 wheels with SB on board.  First stop was the picturesque Waitete Bay with not a soul in sight. 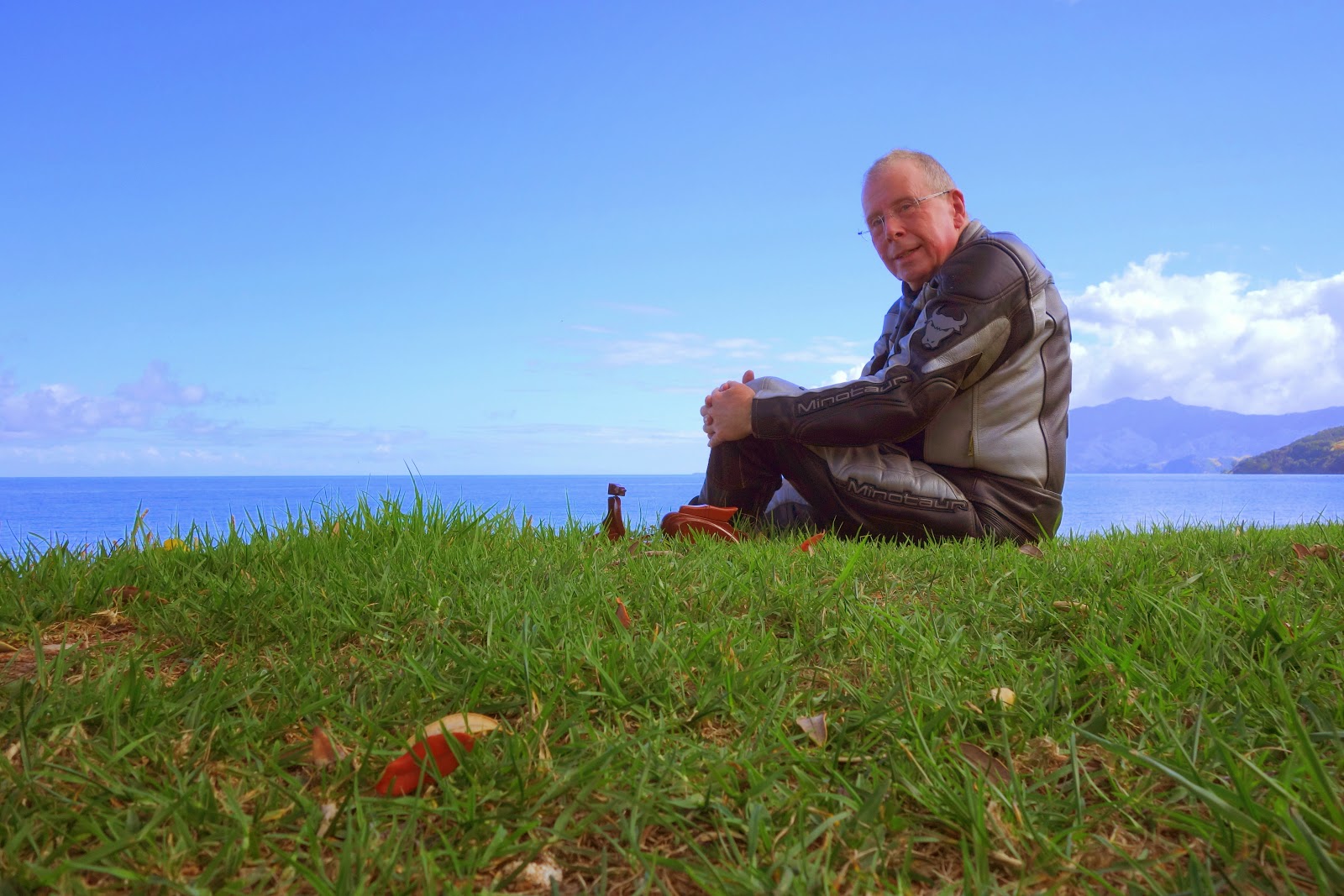 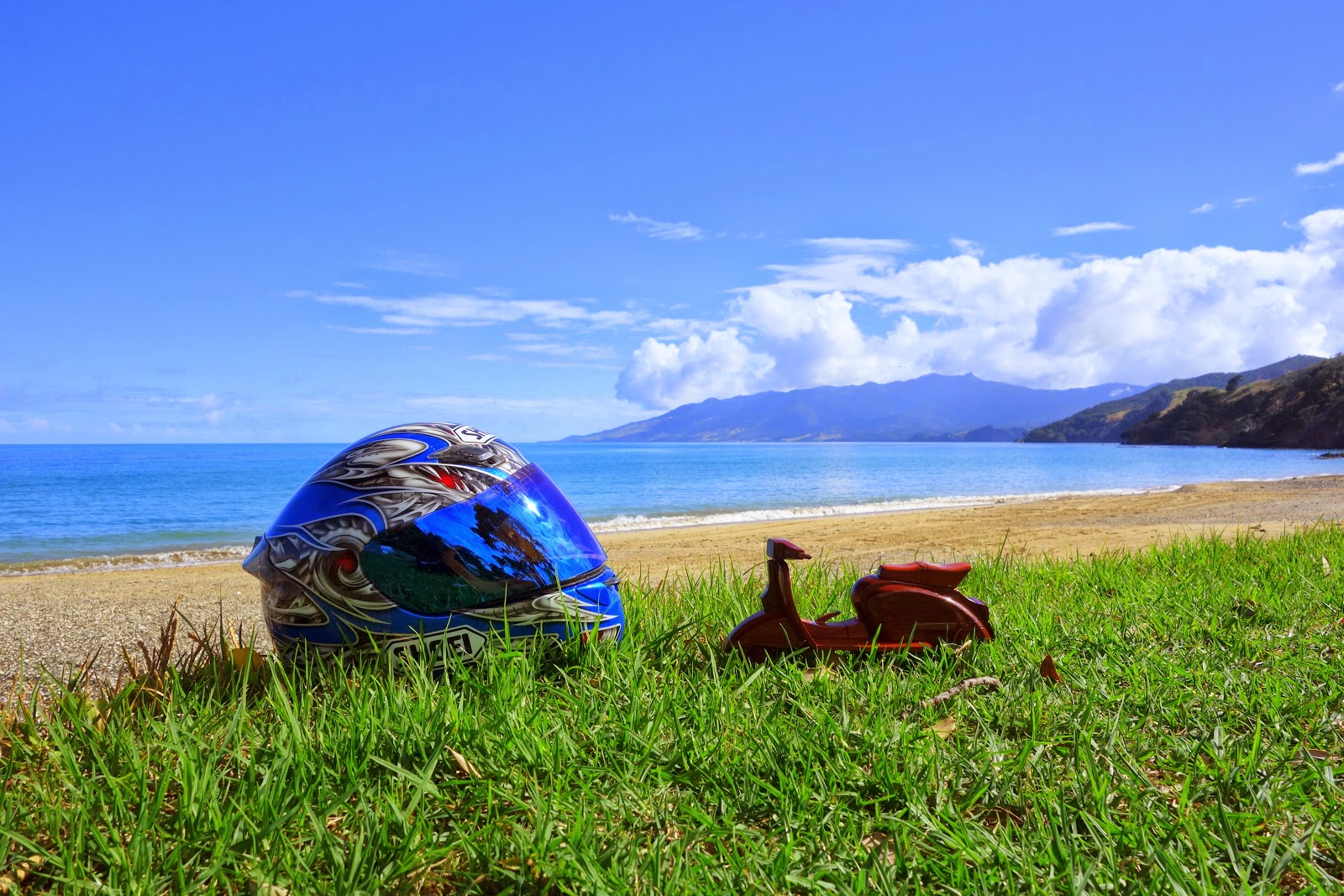 SB striking an arty pose with a Shoei 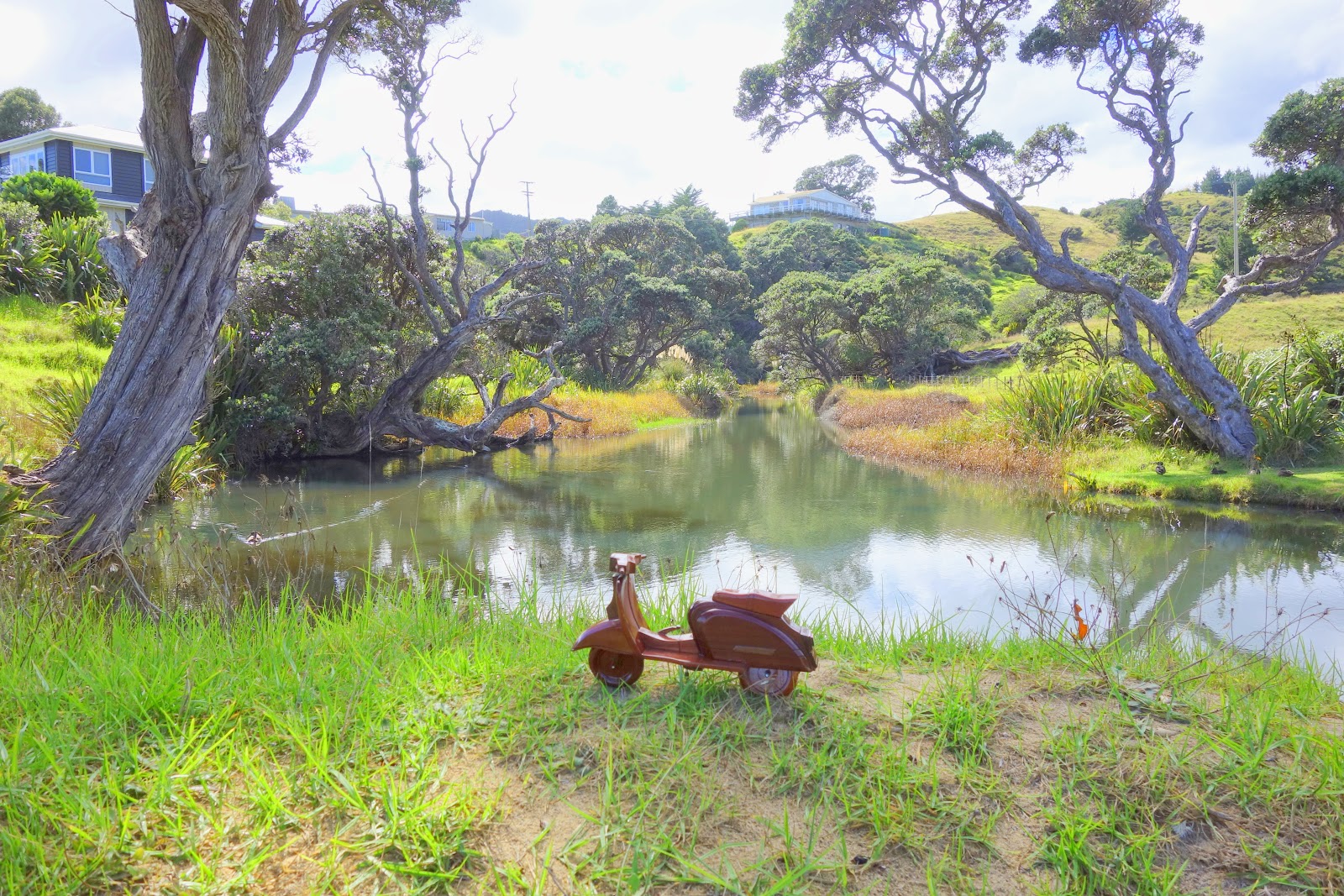 Checking out the tidal creek 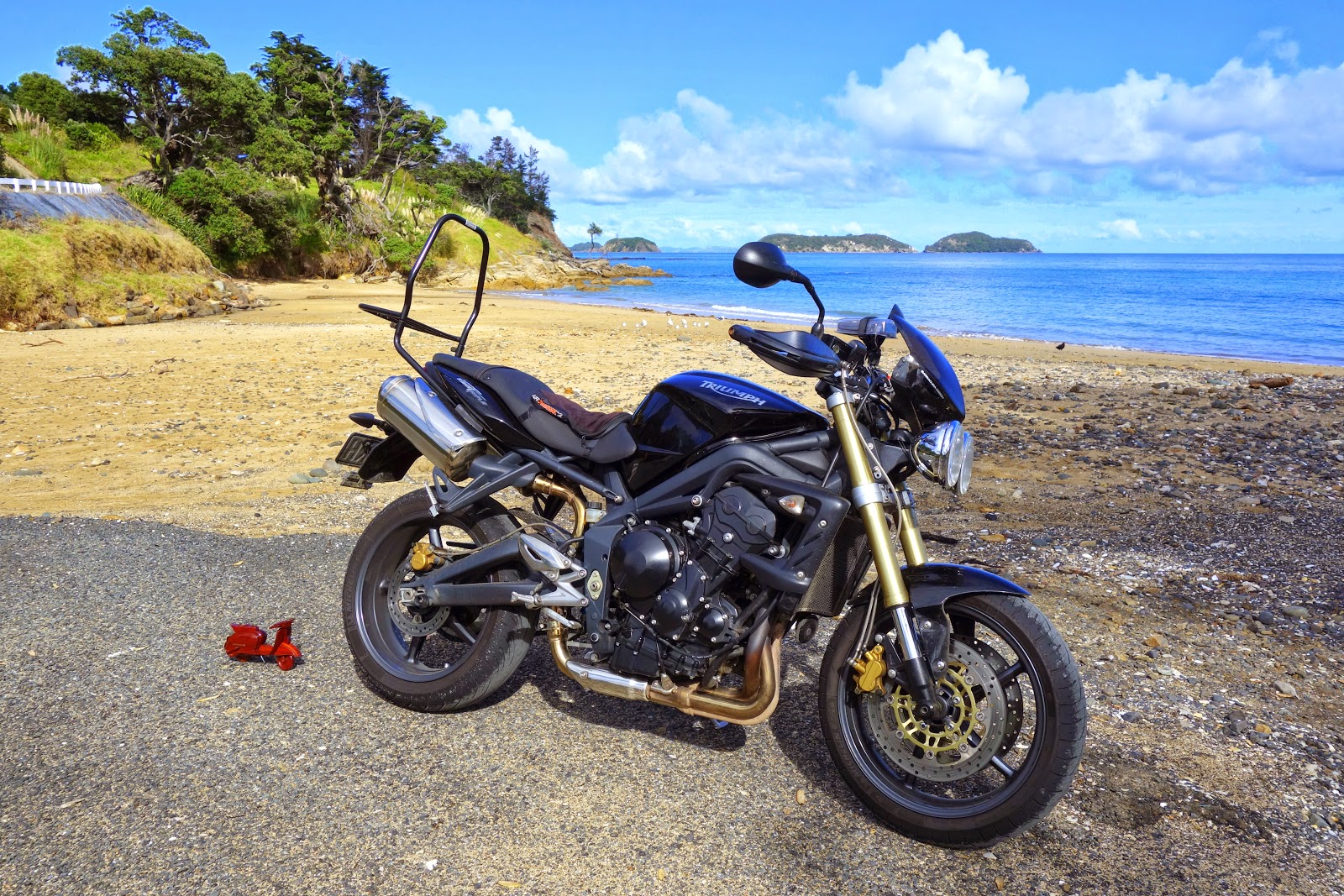 You go on ahead and I'll just follow along.....

After Waitete Bay, it was just a short ride up to the mini-settlement of Colville.  With the Coromandel Peninsula having a strong arts community and lots of alternative lifestylers, including a handful of communes, the iconic Colville Store caters for a wide range of local needs.  If you need mantles for some obscure brand of gas lamp, they have it!  If you're vegan or vegetarian, they have a massive selection of grains, flours and seeds for sprouting - a whole room of them in fact.  It's a store with character!  The post office next next door must be one of the smallest on the planet.  Quite often, there's a whiteboard outside saying "parcel for Joe Smith" or similar - utterly charming. 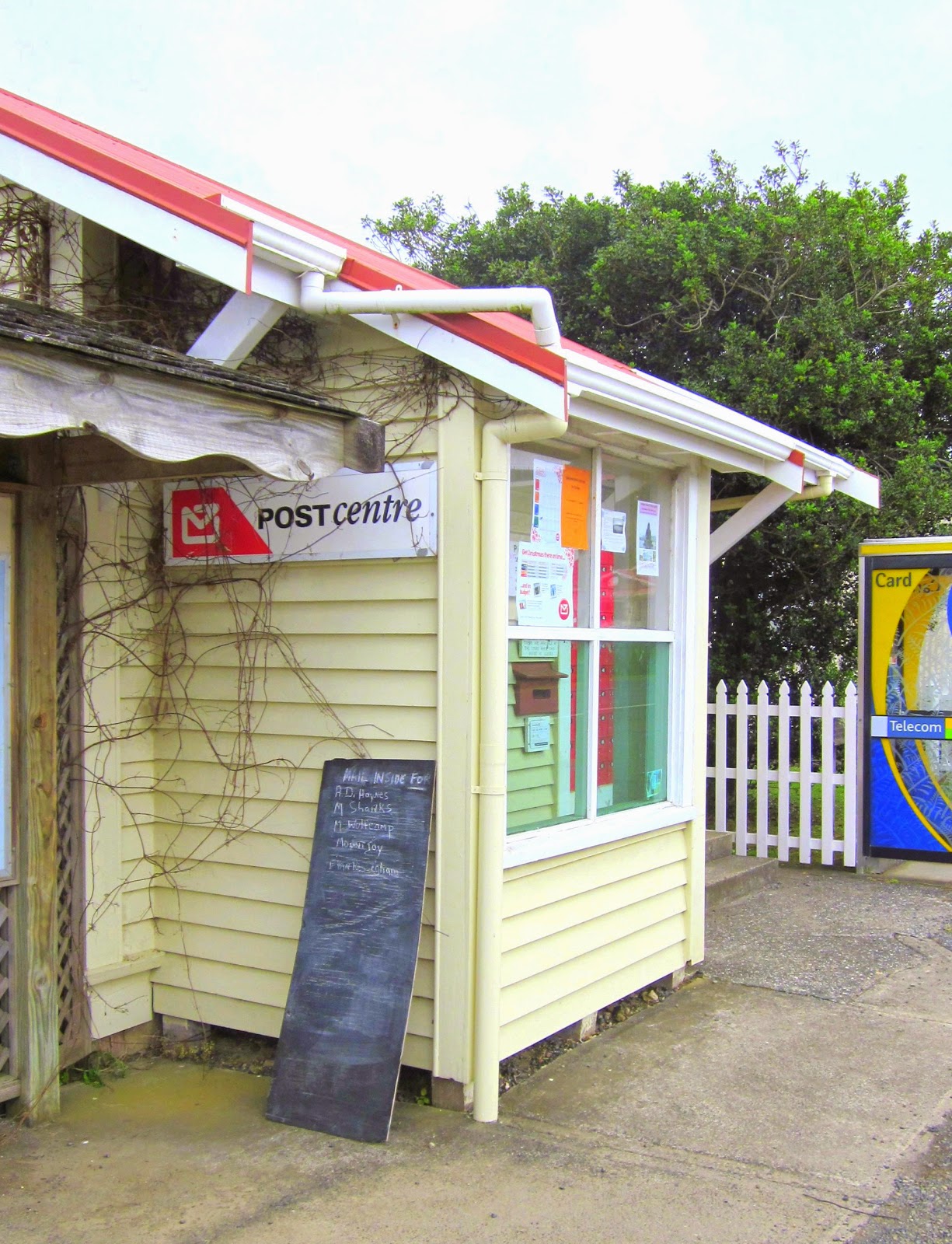 
Colville was the turn point for home and the ride was done at a more leisurely pace down the coast than on the way up!  The Peninsula is known for its arty mailboxes as well as great fishing so ScooterBob just had to stop and admire the giant fish mailbox at the small community of Papa Aroha. 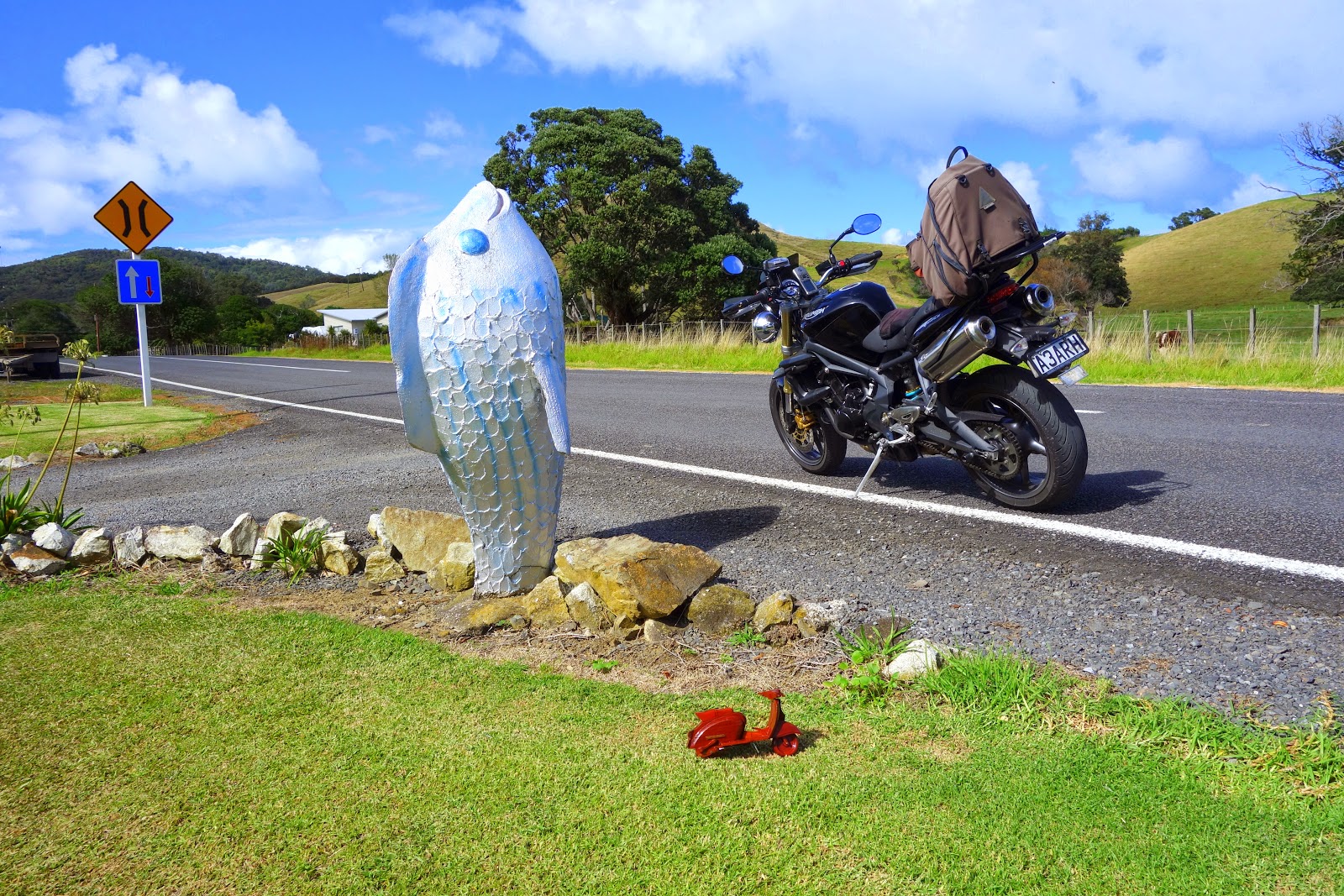 Not a sight you see every day!

Feeling comfortable that SB wouldn't want to report any overly enthusiastic riding, it was time to introduce our Canadian scooter visitor to the upholders of law in our community.  John Morrissey is the Officer in Charge of Coromandel Police Station and the two officers have a heck of a rural area to cover.  Both are keen riders with John having recently sold his big Kawasaki cruiser and bought an even bigger Triumph Rocket 3! 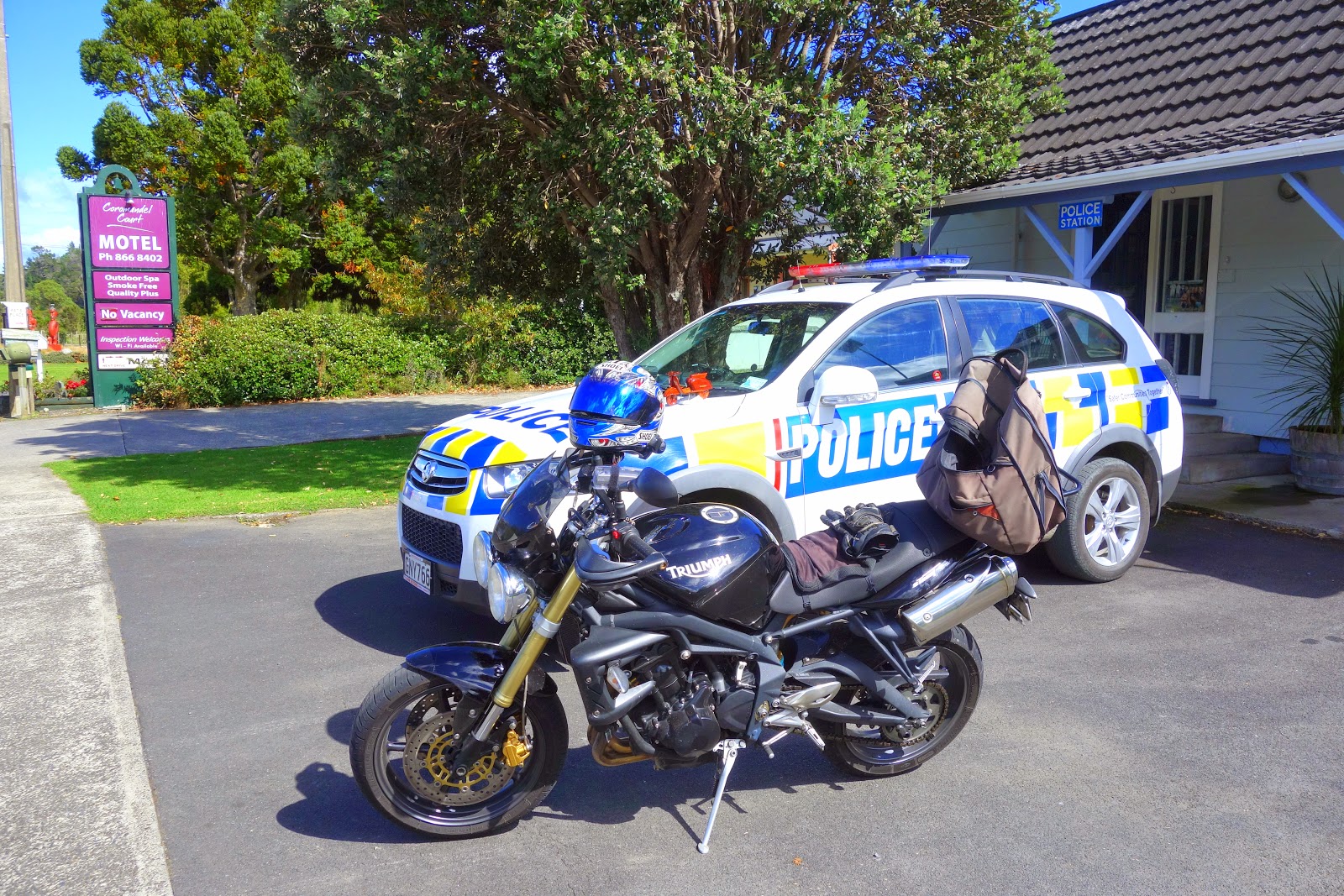 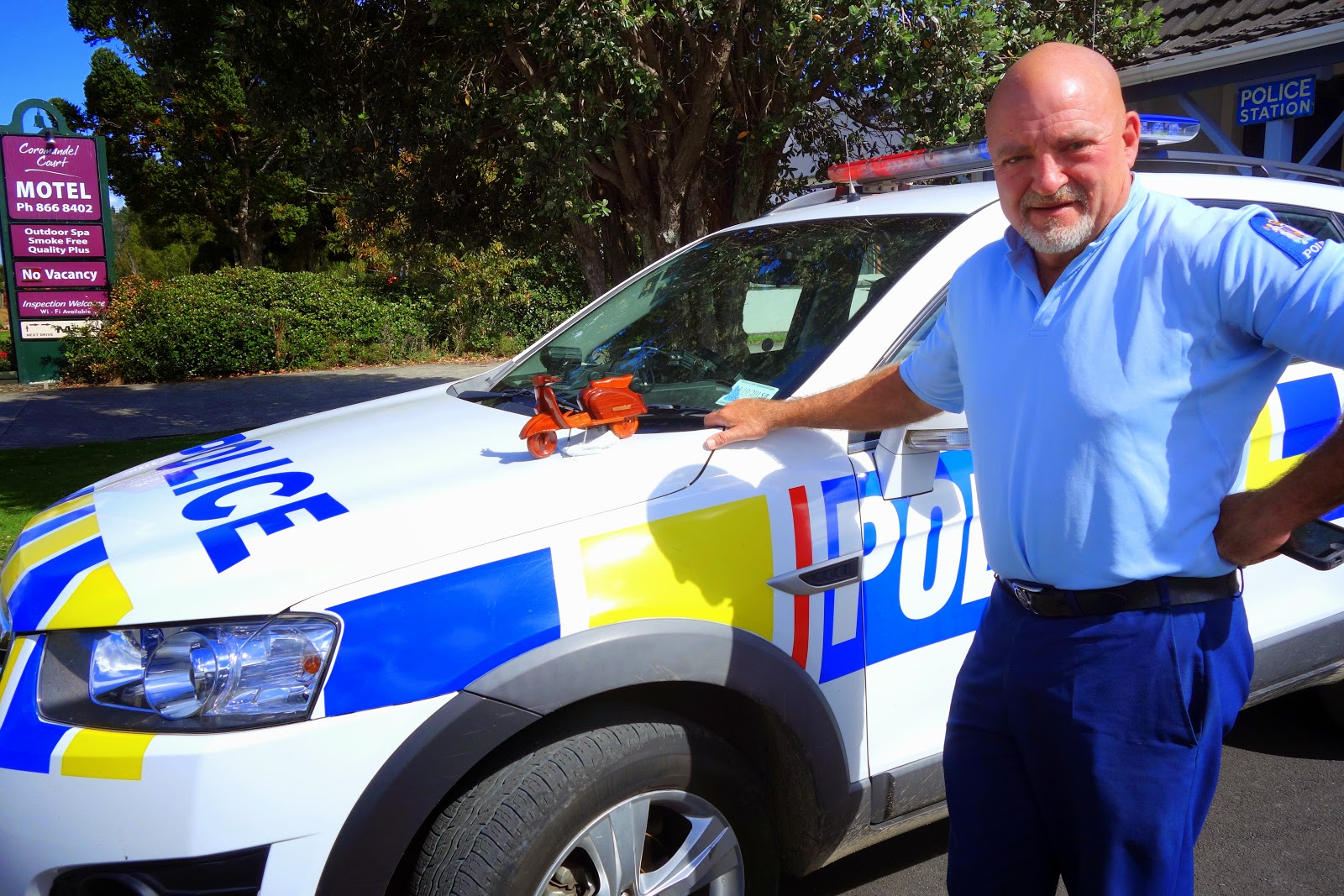 
Out once more in the district, it was time to see some more sights.  One oddity is the wild pigs on the predominantly dirt 309 Road which goes over the Coromandel Range. European tuskers were thought to have been introduced into NZ by Capt James Cook during early exploration in the 1760's.  Normally reclusive and aggressive if cornered, these pigs are fed by a local eccentric "Stu" and have become pretty tame, simply coming and going as they please.  ScooterBob is certainly seeing some unusual sights around the place! 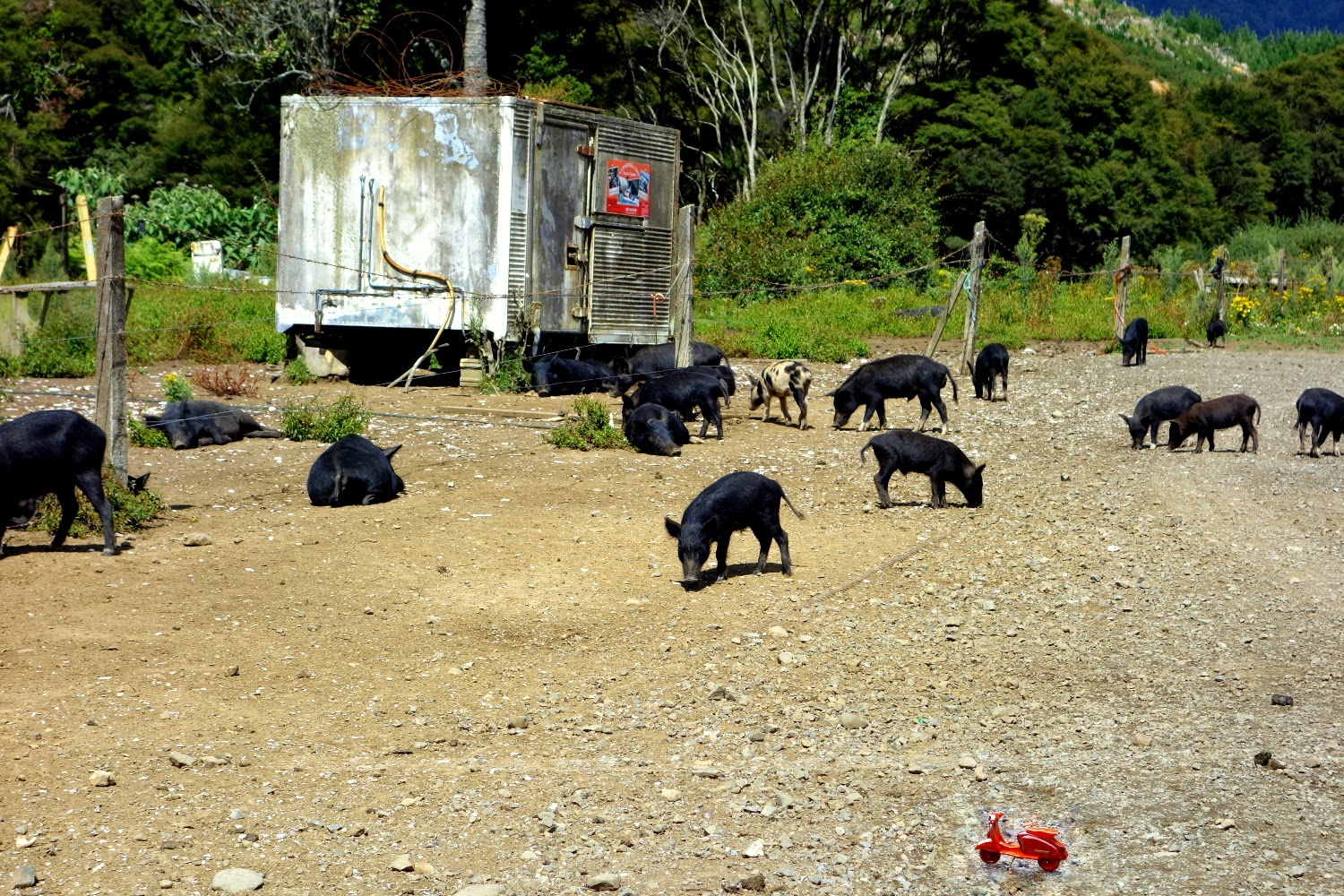 Not an everyday sight for SB!


The Coromandel area is known for its aquaculture, green-lipped mussels and Pacific oysters in particular.  A short ride was taken with Scooterbob round to the far side of Coromandel harbour to see the mussel harvesting boats unloading at Te Kouma wharf ready for shipping fresh mussels to domestic and overseas markets. 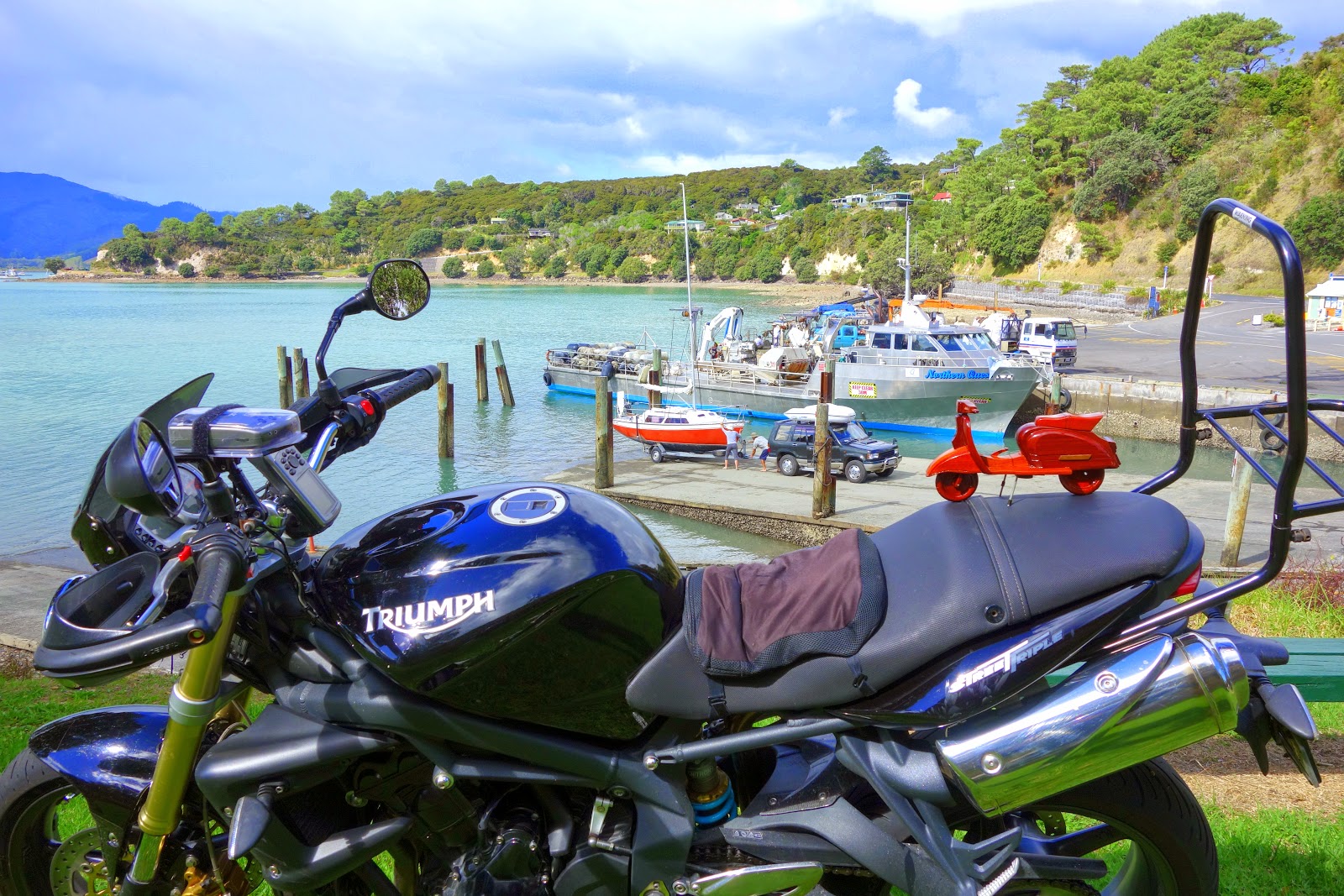 Jennie had taken my 4x4 to haul some stuff about and as I needed to pick up supplies in town, it was a good opportunity to take ScooterBob out for a run in her wheels.  It was also totally appropriate as Bob and Yvonne had also owned an MX5 Miata in the past.  Fellow moto-blogger and close friend of Bob's, Sonja  had also driven Jennie's car as well as ridden the Street Triple in 2012, when she was last in NZ.  The sun was out and the tide was in when we drove back along the causeway to our house - the perfect photo op! 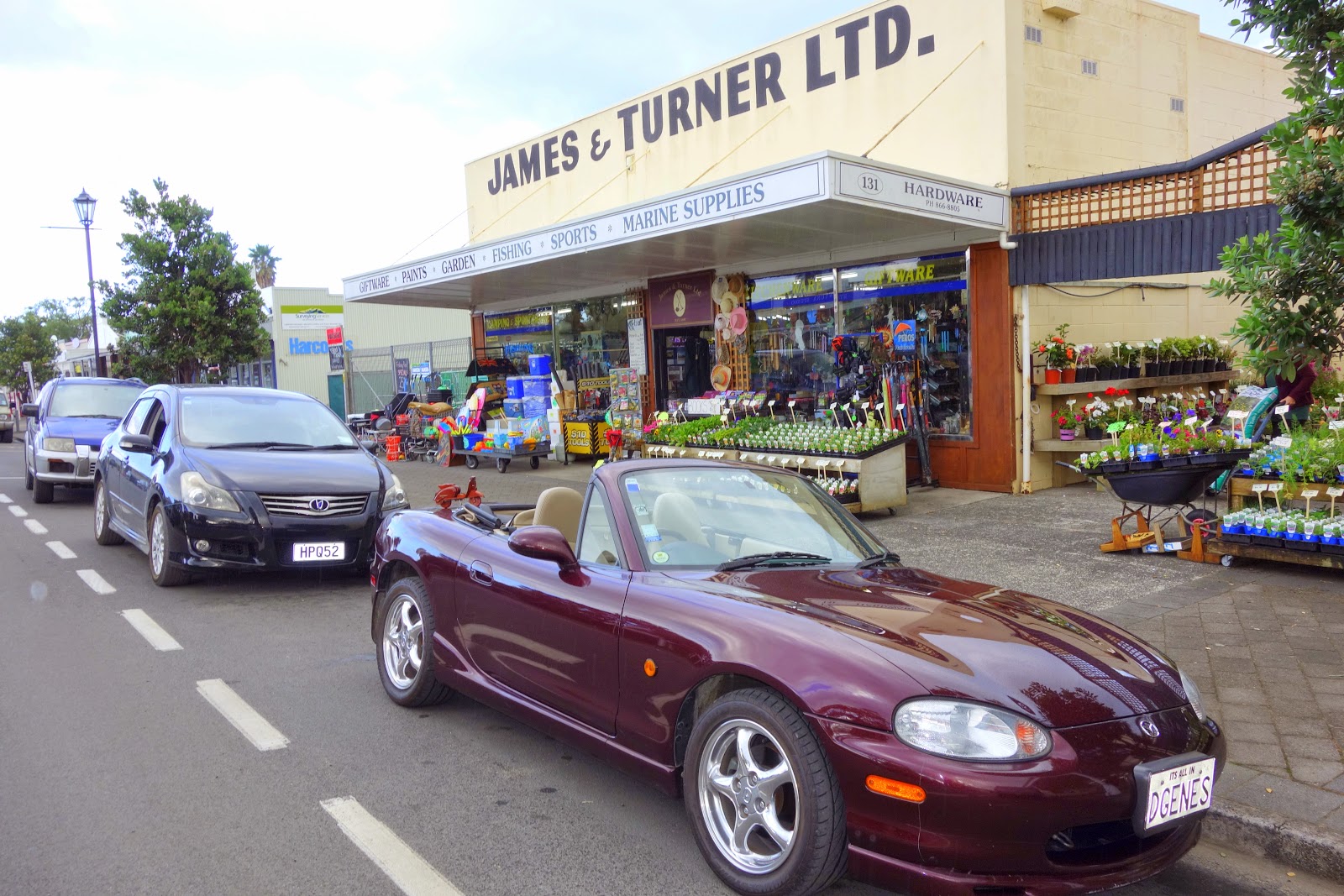 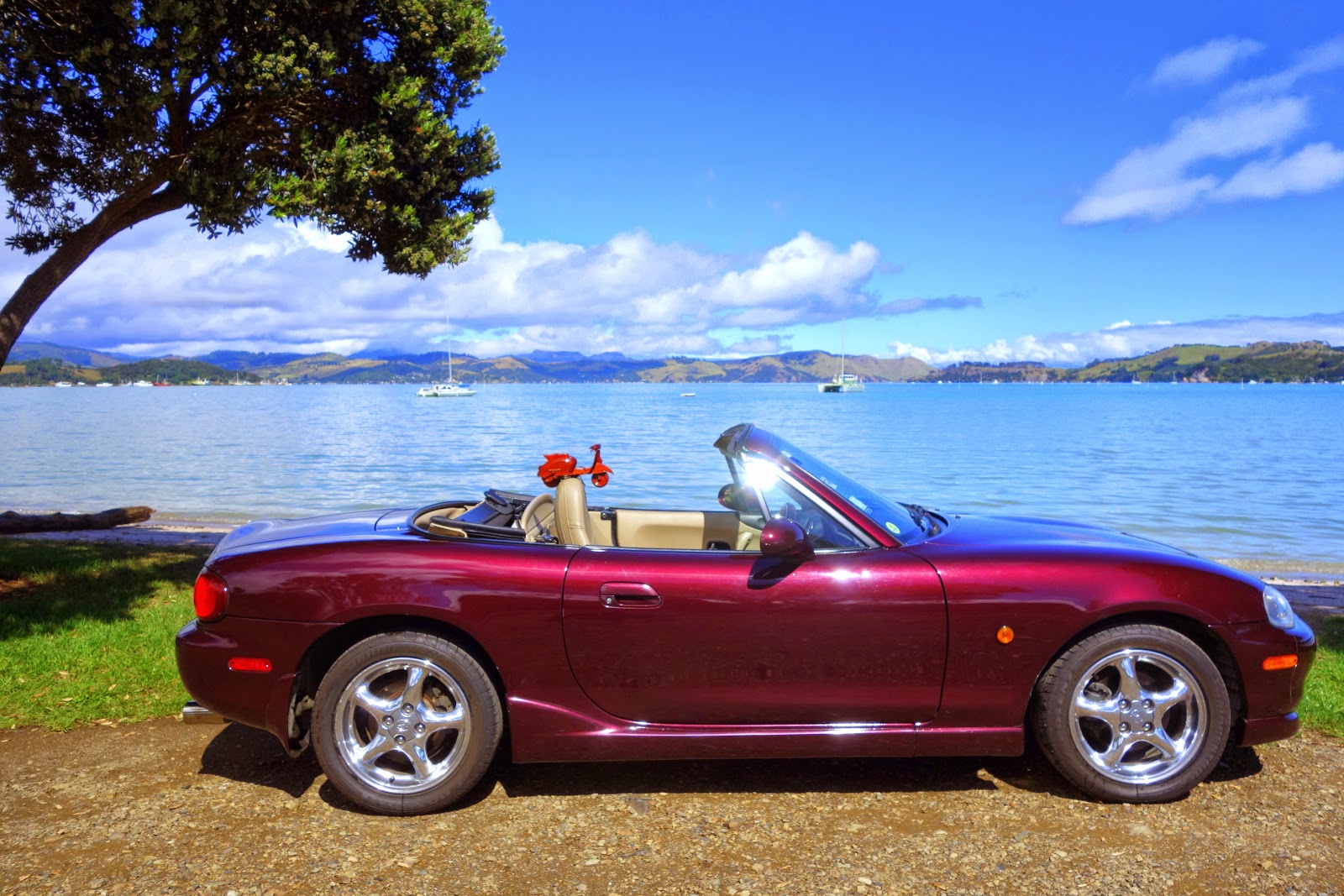 
The road round the Coromandel Peninsula is one of the North Island's great motorcycle roads, 200+ km of twists and turns by the sea and over the Coromandel Range.  On Sonja's last visit mentioned above, she rode my Street Triple in the company of Roger over the famous Coromandel Hill to the picturesque beach settlement of Whangapoua.  That post is on Sonja's blog here and contains remarks by Bob about wanting to fit into Sonja's luggage.   It was therefore an appropriate time for a return visit to introduce ScooterBob to Steve Ferguson, the owner of the Whangapoua beach store.  Steve is a very keen cyclist , even travelling every couple of years to France to ride some of the stages that the Tour de France is held on!  He is also a long-term motorcycle enthusiast and currently owns a Triumph Bonneville America  cruiser. 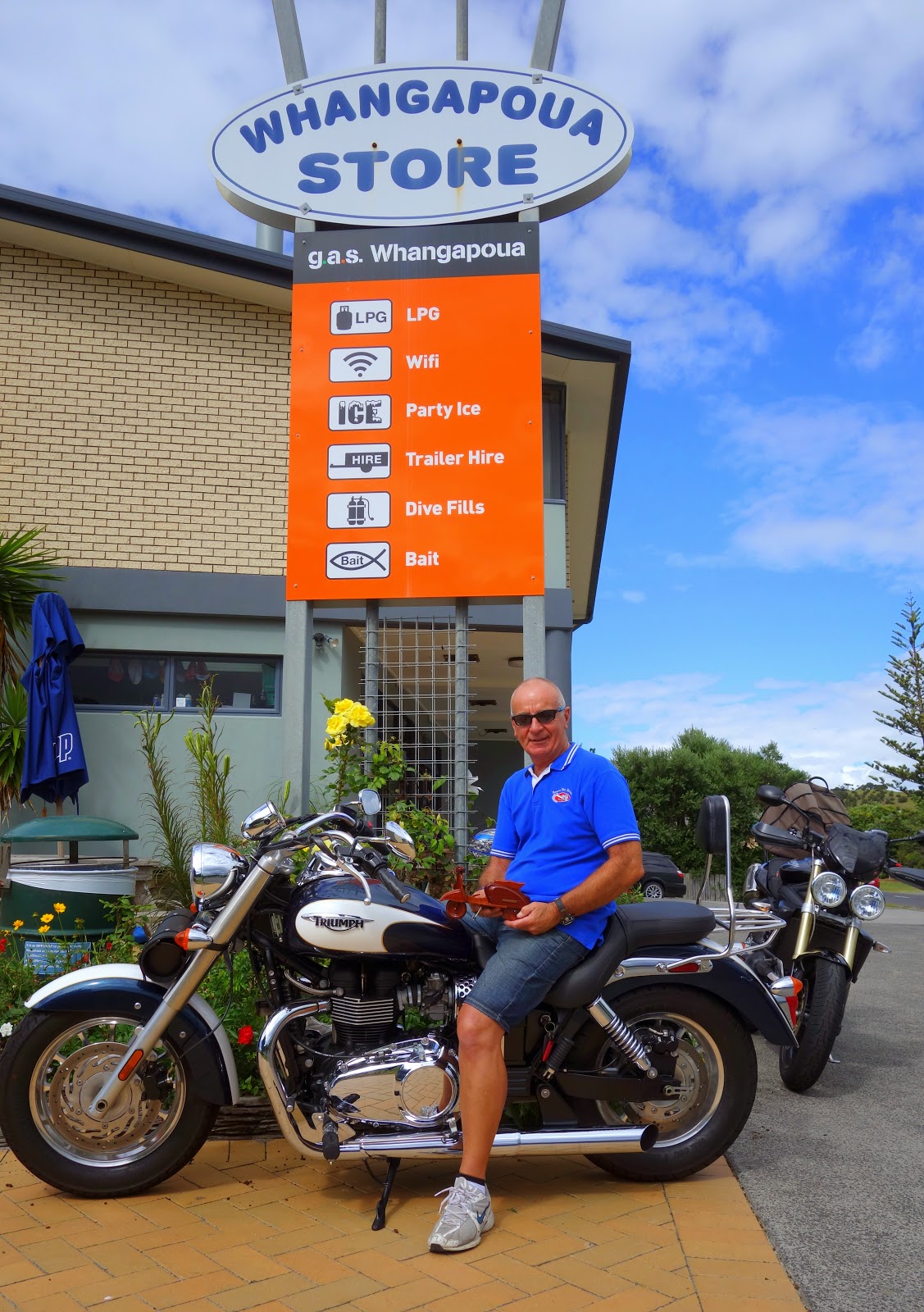 Steve and his Triumph America with ScooterBob


Bob Leong had long followed the journey of close mate Roger Fleming and I through the various stages of advanced rider training with the NZ branch of the Institute of Advanced Motorists .  He offered encouragement in the tough times but also pulled our legs unmercifully and I still look back through his responses to our IAM posts and laugh.

It was only fitting that ScooterBob should meet some of the Auckland region members of IAM at our end of month run last Sunday.  The ride from home up the Auckland Motorway was in some of the worst rain conditions ever encountered but you know what?  Just under an hour before the actual training rides started, the skies turned blue and the roads dried out - maybe ScooterBob had worked his magic!  All the riders were touched by the ScooterBob story and were delighted to mark his visit to NZ! 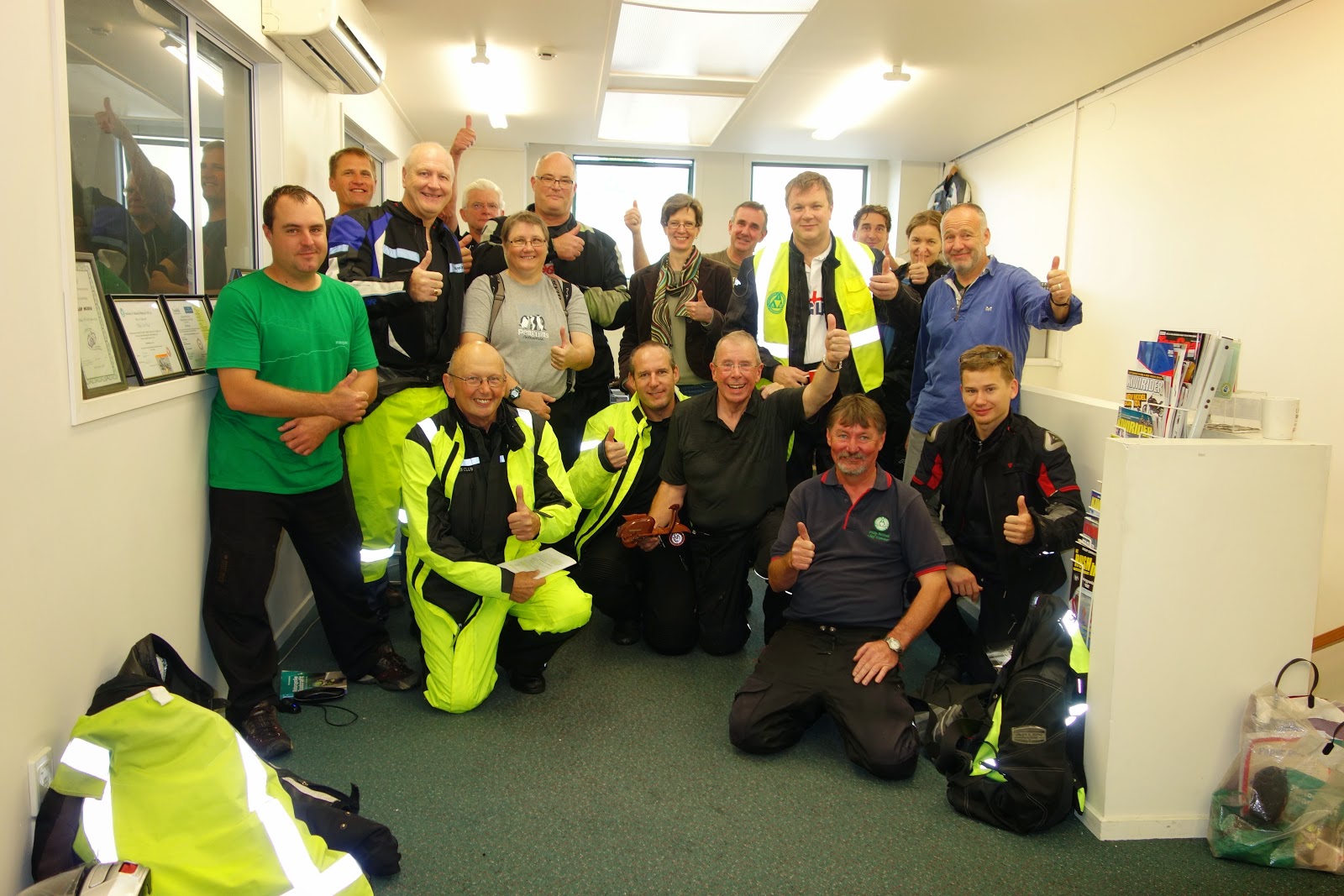 That's the end of ScooterBob's stay in NZ and he will shortly be winging his way to England to meet Nick Laskaris of Nikos World .  What a privilege and fun it's been to take part in  ScooterBob's travels and to to honour Bob Leong.  Travel well SB and very much looking forward to the next part of the story!