A trip down Memory Lane

We left the UK for a life in New Zealand in 1975.  Leaving one's family and cherished friends wasn't something to be undertaken lightly, especially in those days which were well before emails, Skype, Zoom etc.  Nonetheless we managed to stay in touch and the occasional trip back to the UK also kept friendships alive.  Having said that, I guess that true friendships withstand the test of time irrespective of how often we see each other.  How often do we remark that it's like we've never been apart when we meet or speak to close friends we haven't seen for a long time?

One such close friend is UK-based Rick.  We grew up through our teen years together from a shared love of flying model aircraft.  Here's a photo of Rick and I with our free flight gliders in the 1960's.  By all means have a laugh at my woolly hat! 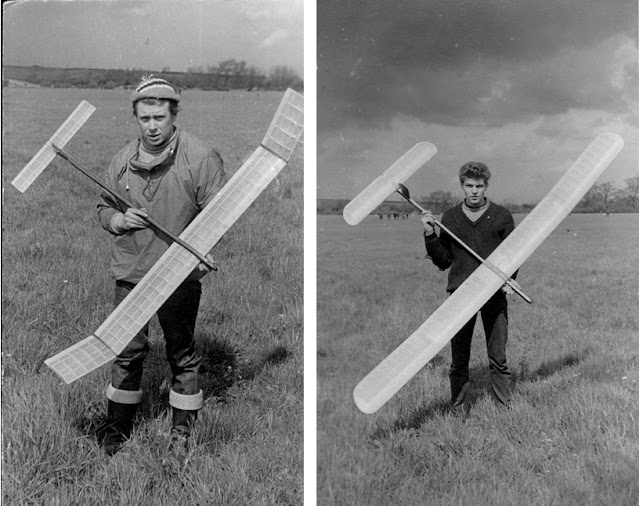 From our mid-teens, we also shared a love of motorcycles, avidly reading about them before actually getting our first bikes.  In Rick's case, it was a 200cc Triumph Tiger Cub and in mine, a 50cc Suzuki. We read the monthly Mototorcycle Mechanics magazine and others from cover to cover.  For topping the national exams at my school in English and Physics, my chosen book prize was "The Rolls Royce of Motorcycles"; about the Brough Superior.  At the same age as me, Rick still rides a Honda Fireblade and owns a number of classic vehicles so we've both maintained the passion about things automotive for at least 57 years.

We stay in regular touch and recent correspondence contains some lively reminiscences about our youth and whether time has corrupted some of our memories.  Then this week, a package arrived from Rick containing a copy of Motorcycle Mechanics from May 1964!  What a thrill it was to receive it because if there was a seminal moment in our youth, it was reading this particular issue way back in time. From memory, this issue was only a handful of months before getting our first motorcycles and reading about the superbike of that era, the mighty Triumph Bonneville; really got our hormones sloshing about.  Here's the cover..... 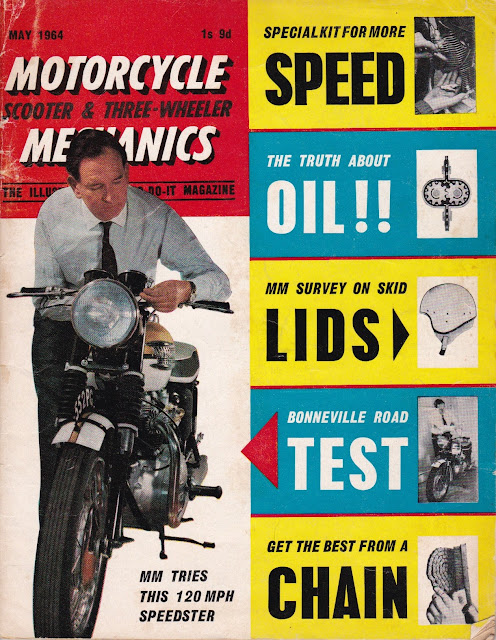 There's a lot of detailed reading to be done over the coming weeks but as well as awakening old memories, it's interesting to compare all sorts of things between then and now. Flitting through the pages, most of the magazine staff wore a collar and tie - how terribly formal!  In articles on how to maintain a bike, there was an obligatory white coat in most instances!  The other noticeable thing was a relative lack of objective data in many road tests.  Note the 120mph claim on the cover for the Bonneville for example.  Yet we swallowed it, hook, line and sinker!  Even so, the wide range of articles covering maintenance, road tests, equipment reviews etc provided a great introduction to what was to become a lifetime passion and route to personal freedom.

An initial perusal of the magazine has brought forth a few delights to share.  The first was a reader's letter on a hints and tips page. From C Yeo of Warmley:

"To seal inner tubes against slow punctures, first remove the valve and pump in about 2 tablespoons of milk, then spin the wheel and pump up.  I have found this a most effective cure".

Hmmm..... if it were today, Mr Yeo may find himself in trouble with the world's more litigous countries. Personally, I think that his hint is a subtle way of removing certain gullible riders from the gene pool.  Practical Darwinism at work.

The early 60's was a time when motorcyclists were transitioning from the traditional "pudding basin" helmets to a loose copy of those worn by jet fighter pilots.  Interestingly, there was a British Standard for testing, even in those days.  It consisted of a 10lb (4.5kg) block being dropped onto a helmet from 8ft (2.4 m).  There was an penetration test using a steel spike too.  No assessment of frontal and side impacts as full-face helmets were a fair way off.  Prices varied enormously at the time.  A basic Slazenger helmet was a little over 2 pounds and a top of the line Everoak Racemaster jet helmet was a shade under 5 pounds. 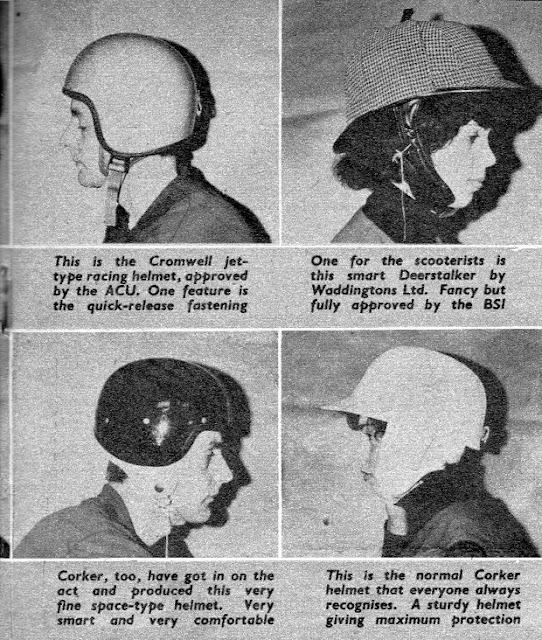 Motorcycle clothing was ridiculously cheap by today's standards but as with all items, it probably isn't a country mile away from today's prices when taken as a percentage of nett income.  The accompanying photo is for the Belstaff Trialmaster suit.  I had one of these suits.  It was devoid of armour but having hit the deck on the odd occasion whilst wearing it, its toughness and abrasion resistance was pretty good.  The advert says "treated for rot, fungus and water" which was no exaggeration of its performance and longevity.  The waxed cotton construction was hard wearing over a good number of years and because of the wax coating, a secondary layer consisting of road grime and squashed insects built up over the official one.  This might have been unsanitary but resistance to chemical, biological and nuclear weaponry could probably have been added to the list of its capabilities.

I don't recall seeing any motorcylists wearing waxed cotton jackets in recent times but in the UK at least, Belstaff seems to have found a fashion niche among "gentlemen farmers" and folk who attend TV-worthy cross-country horse events.  Green gumboots also appear to be the footwear of choice, probably even in high temperatures with not a drop of rain on the horizon.  But I digress....

A couple of adverts for accessories also caught my eye.  Whilst the early Japanese motorcycles generally came with "all the fruit", British bikes didn't generally have indicators and 6 volt electrical systems posed problems too, not the least being unable to see where you were going in the dark.  However, it was possible to buy aftermarket indicators for the princely sum of 5 pounds 7 shillings and sixpence.  With unreliable Lucas "Prince of Darkness" electrics, this may have been a bridge too far for the limited electrical output.  However, Lucas did offer a 12 volt conversion for some British models for between 7 and 15 pounds.  Perhaps they'd belatedly seen the writing on the wall with their Japanese competitors who had been initially dismissed as not being a threat.

Moving on to the price of bikes themselves, the 650cc Triumph Bonneville was priced at 320 pounds.  Arguably, the pinnacle of modern bike development at that time.

The 250cc Ariel Arrow Super Sport cost 196 pounds.  With a pressed steel monocoque frame, it's a pity that they weren't developed further.  A friend had one and the handling was impressive. 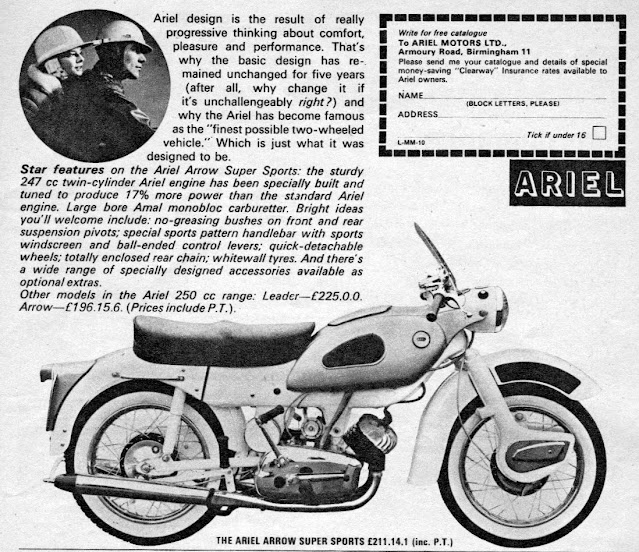 The mid-size 500cc Triumph Tiger 100 was 286 pounds.  I owned an earlier version and apart from irritating minor oil leaks and 6 volt electrics, they were really reliable.  The important feature of most bikes of that era was that they were easily maintained by the average owner with only a small number of special tools required for when more extensive work was required. 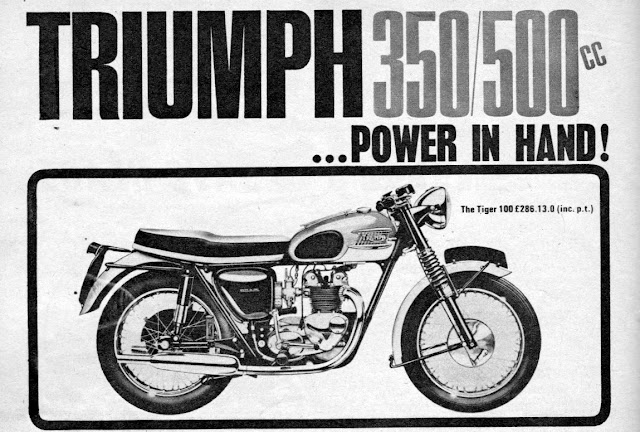 Japanese bikes were just starting to make serious inroads into the market and 250's such as the Honda CB72 Super Dream and the Yamaha YDS2 were more than a match for most British 500's.  With the Yamaha priced at 257 pounds, it was cheaper than the 500 Triumph above with far more features. 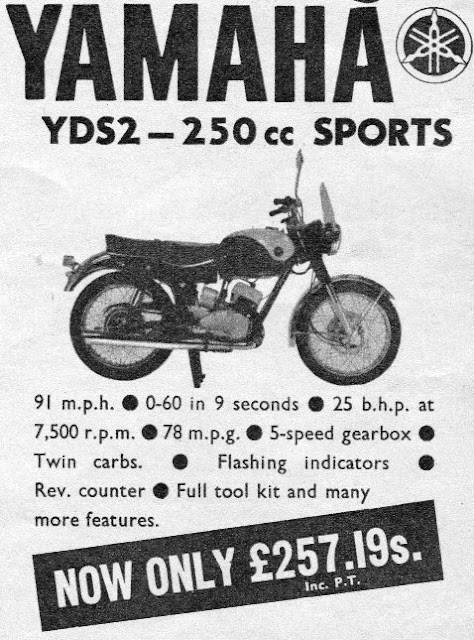 The Japanese made tuning kits for their bikes freely available at modest cost even by the standards of the day. The following photo for a 250 Honda shows a high performance camshaft, head gasket and valves for a total of 5 pounds. Amazing! 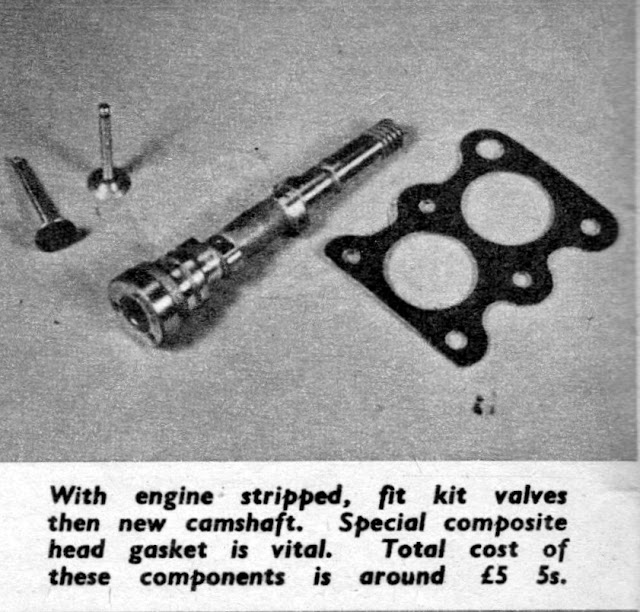 Extra performance at a modest price

The magazine covers not only motorcycles but 3-wheelers too.  In post-war UK and many other countries too, family finances didn't always stretch to owning cars.  Three-wheelers could be driven on a motorcycle licence and were comparatively common on the roads in the 50's and 60's.  Unfortunately, most of them were fitted with underpowered small capacity motorcycle engines and were normally found holding up a long line of traffic on the open road or having expired en route to somewhere.  Some of the tales involving 3-wheelers deserve an article in their own right!

Prices weren't hugely more than for a bike like the Bonneville and offered extra carrying capacity and protection, even if performance was appalling.  The Fiat 500 undoubtedly offered the best value for money although it required a car licence.  I guess  that these types of vehicle provided the divergence opportunity for those who rode motorcycles for fun and those who needed them primarily for transport at a modest price.

It's a real thrill to have received the magazine from Rick and I'm looking forward to a thorough in-depth read over the coming week or two.  It represents the start of my motorcycling passion and has unlocked a lot of memories at the same time.