Having fun AND learning at the same time!

There are some weekends which lift the soul and the one just gone was one of them.  The Wellington chapter of the internationally-recognised Institute of Advanced Motorists were hosting the annual general meeting and to make it a memorable weekend, had organised a whole load of related activities.  A number of the NZ Police are also IAM members, both use the Roadcraft training system and we were generously offered the use of the magnificent facilities at the Royal NZ Police College.

I’d originally intended to ride the 600-odd km to Wellington on the bike but Jennie was keen to spend some time catching up with old friends in the region so her MX5 was pressed into service for a bit of 4-wheeled fun!

On the first day of the conference weekend, the morning was split between cornering exercises on the skid pan (mercifully dry at the time) and low speed handling skills.  I enjoyed a lap on the pan in the MX5 which was great fun but spent most of the time photographing the skills on display.  The police instructors were the best of the best and had donated their time for the weekend – outstanding! 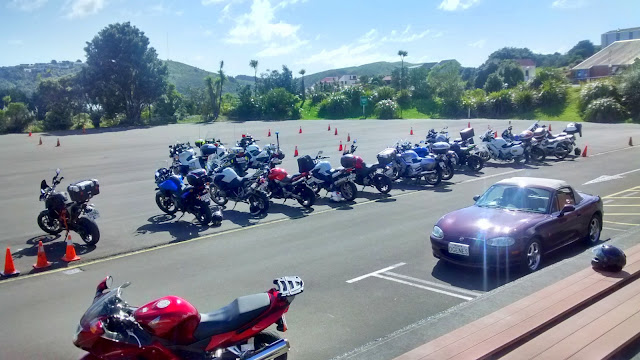 Bikes and a lone MX5 on the parade ground! 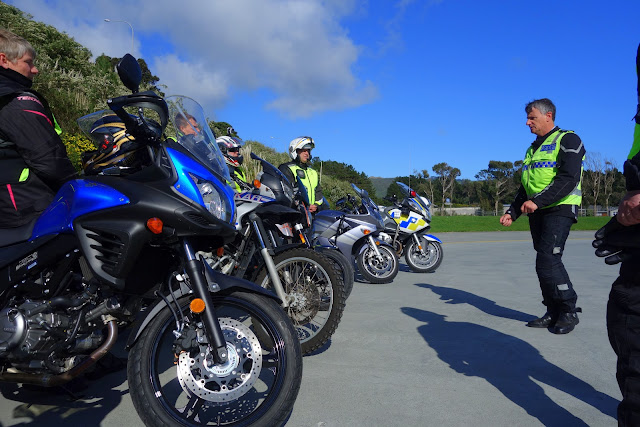 Briefing by police riding god at the skid pan 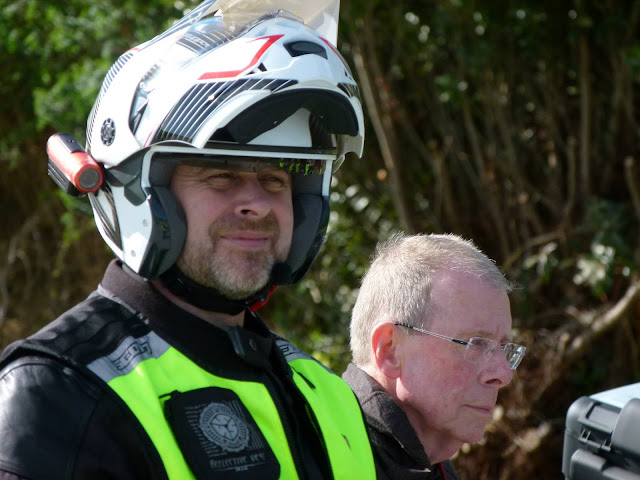 Incoming IAM President Carey Griffith and a pensive-looking writer at the briefing!

The way that the police were able to throw their fully-laden BMW's and Hondas about was jaw-droppingly good.  Never try to do a runner because you'll lose! 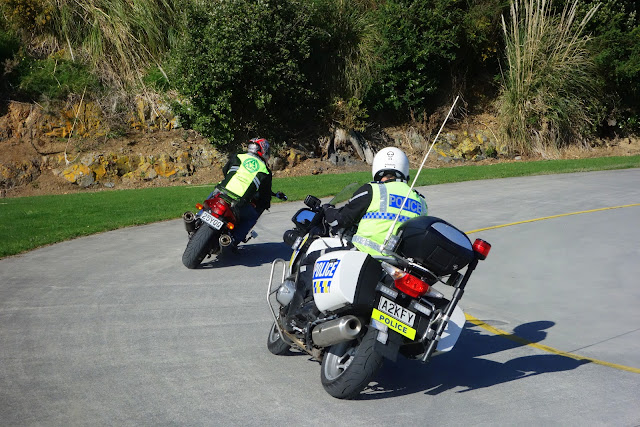 Not a sight you want in your mirrors on the open road! 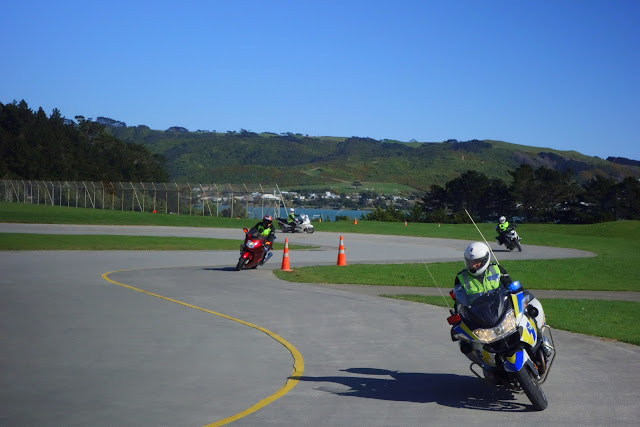 Do try and keep up, people!


After cornering practice on the skid pan, it was time to sample low speed handling through almost impossibly close cones.  It was a privilege to watch the police show how it should be done with their wide, heavy machines. 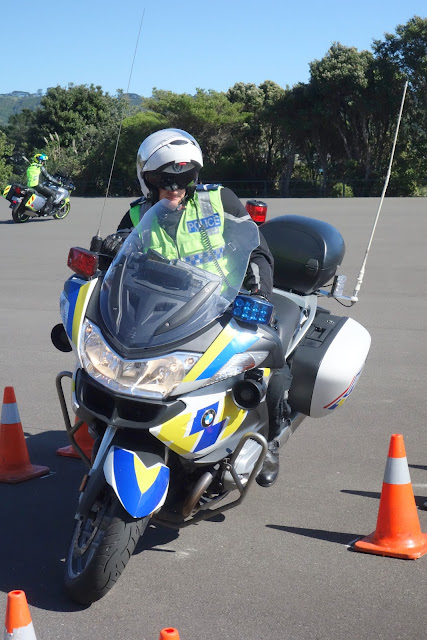 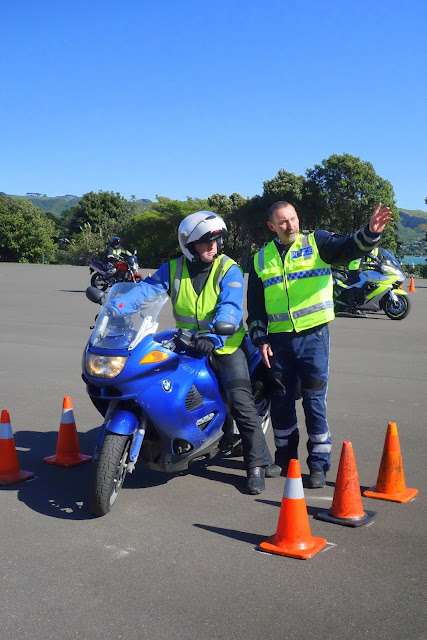 Lock your steering over, look into the distance and GO! 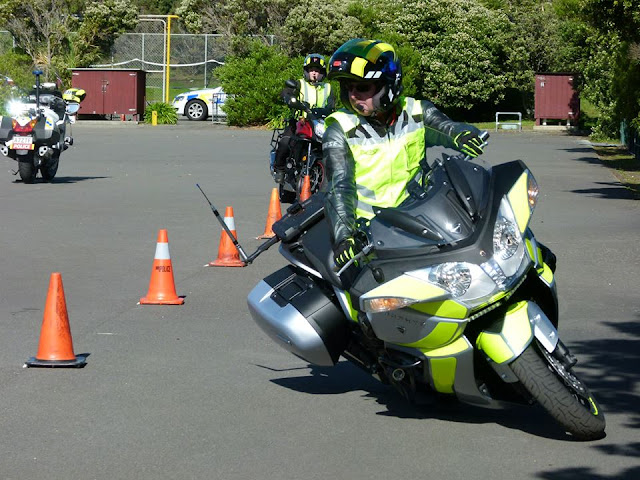 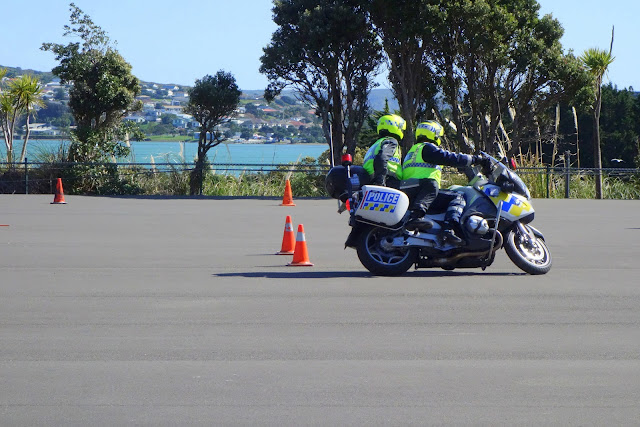 Round the cones 2-up too, no worries! 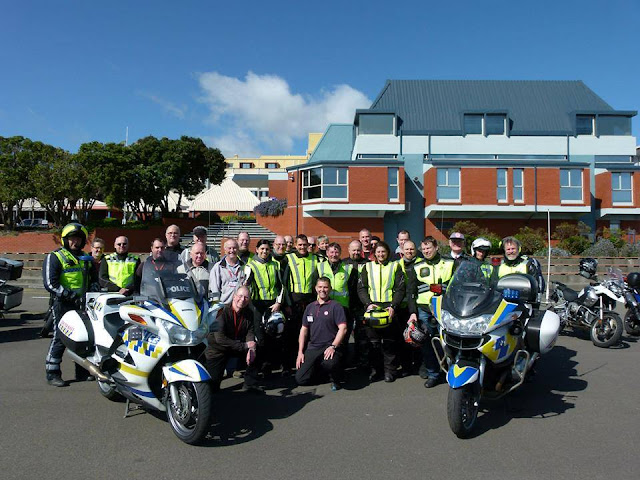 Some of the team - yours truly kneeling (L)

After a splendid lunch, it was off to the town of Martinborough, over the Rimutaka mountain range - twisty and technical nirvana for riders!  On this occasion, the police riders were very happy to mix in for a rare social occasion which was great.  It was also great to be driving Jennie's MX 5 whilst she was out in the city with a mate.  My passenger Mark was not only the President of IAM NZ, but a very experienced police driver and head of the Serious Crash Unit in one of the Auckland policing districts.  He joked that the run would be my Advanced car test. I took this as license to "make progress"!  I asked after the run whether he'd passed me and with a straight face, he replied that he'd certainly passed something.  Not quite sure what he meant, but it was a reasonably quick trip! One of the other riders later told Jennie that her car "goes a bit" and I received "THE LOOK" (a female trademark) for my pains. 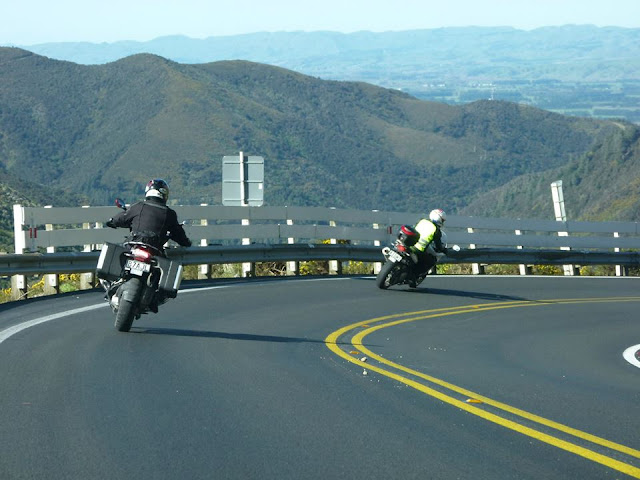 Perfect lines, no room for error! (Photo by Mark Fleming) 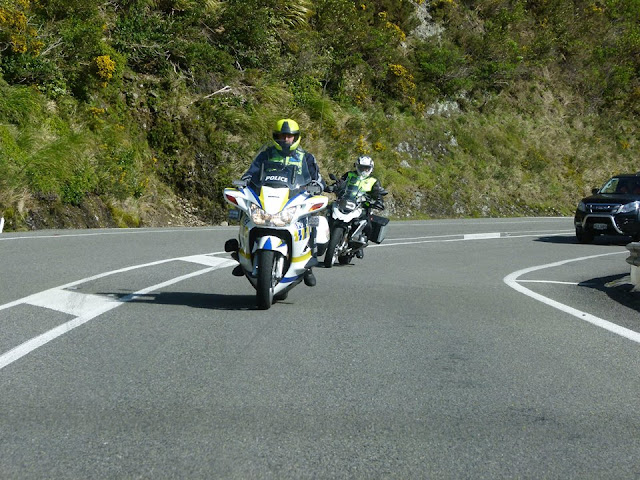 There was a short stop at the Rimutaka summit to re-group and it was noticed that a bunch of Harley-riding "rebels" parked there didn't hang about once they noticed the strong police presence! 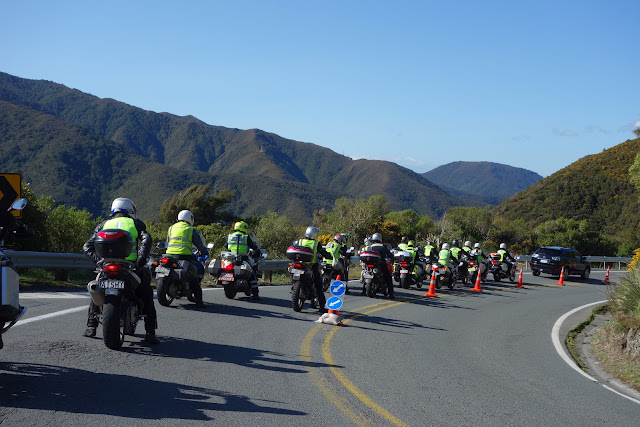 Temporary traffic lights to hold us up - aarrgh! 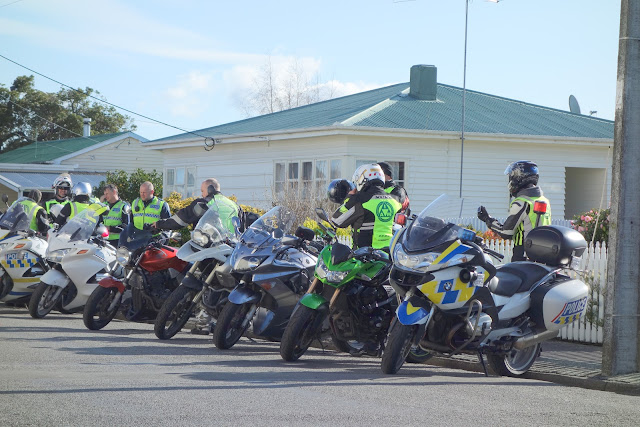 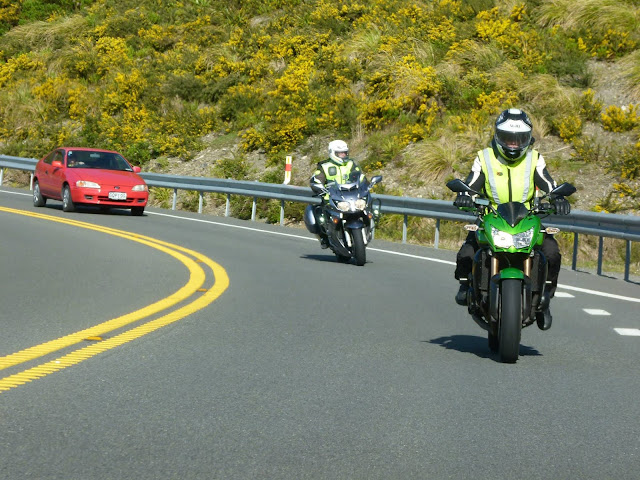 After a quick coffee, it was time to return to Wellington for the evening activities of a visit to the regional traffic control centre followed by a lovely dinner at a city restaurant.  A wonderful way to end a packed and fun-filled day.

Day 2 was the business end of the annual general meeting so no time for hooligan activities.  IAM is growing fast in NZ and it's really heartening to see riders of all ages and all types of machines wanting to raise their skills rather than thinking that they have nothing to learn.  It's uplifting being with fun people and no egos who never stop learning.  And how awesome were the police instructors for giving up their time to be with us?  Just outstanding!

Part of our 8 hour journey home yesterday was across what is known as the Desert Road - part of the Tongariro National Park in the central north island.  The road at its peak is 1000 metres altitude (3500 ft) and can be a god-awful place in bad weather. Although there had been a light dusting of snow in the early hours, it was spectacularly clear when we passed over it   The active volcanoes really stood out and the view was breathtaking.  As I said at the start - an occasion to lift the soul! 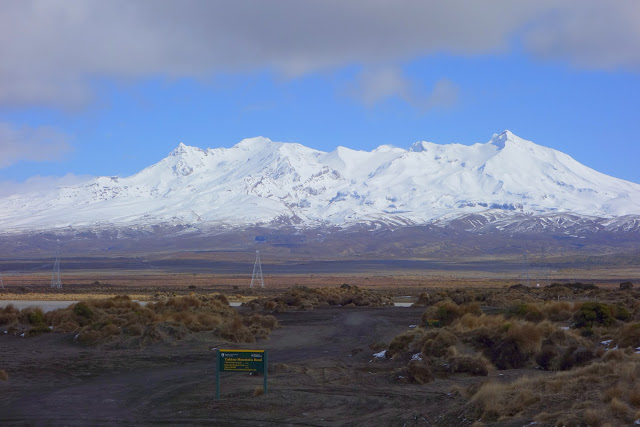 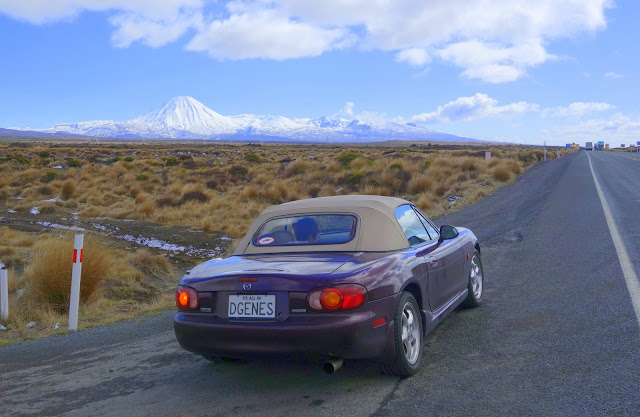 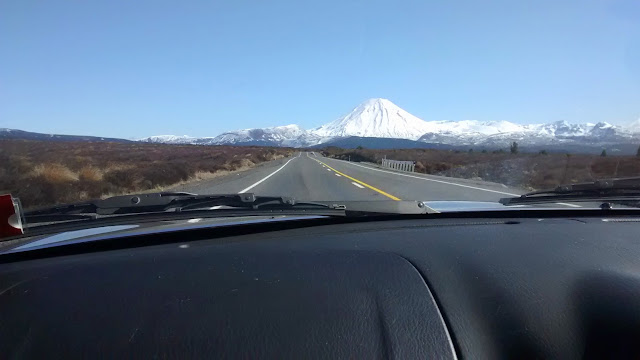 Mt Ngauruhoe from the inside of the car