NZ is now at Level 1 in the fight against Covid -19.  22 days since the last reported new case and no active cases.  What this effectively means is that life is pretty close to pre-Covid days for us locals apart from contact tracing controls still being in place.  Now we have to get the economy moving again.  There are strict border controls and entering NZ requires high level approval.  Overseas film personnel associated with the new Avatar movie have arrived and are in quarantine and the same will apply to the United States Americas Cup Team  next week.  Both of course have strong economic benefits for the country.

I celebrated Level 1 by going for a decent ride on my home turf, the Coromandel Peninsula.  It felt a bit odd because although all travel restrictions have been removed, there was almost no traffic on the open roads.  Most people seemed to be congregating in the small towns, doing a bit of shopping and enjoying company over coffee.  Suited me! 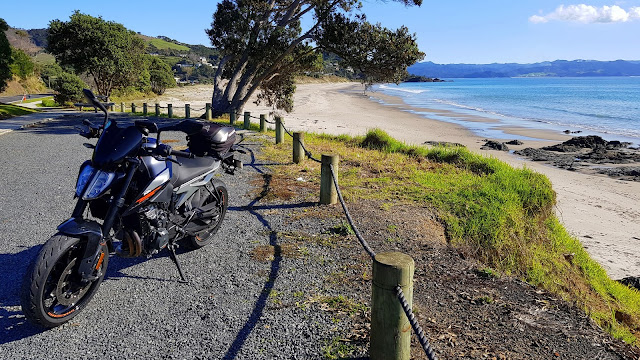 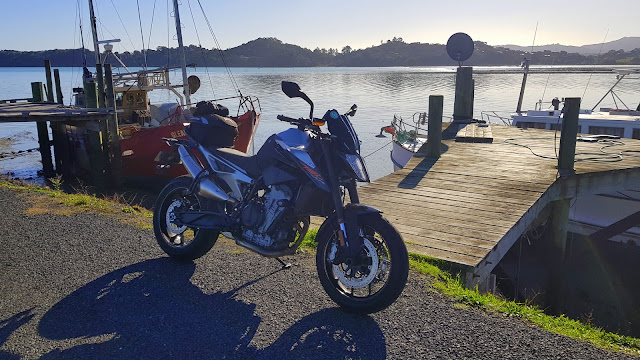 Coromandel Harbour wharf - we live on the ridge in the background

It's now winter in NZ and although there are rarely frosts in our area, there is less food around for the native birds and it's noticeable that more are coming into the garden to drink nectar from some of our flowering succulents. 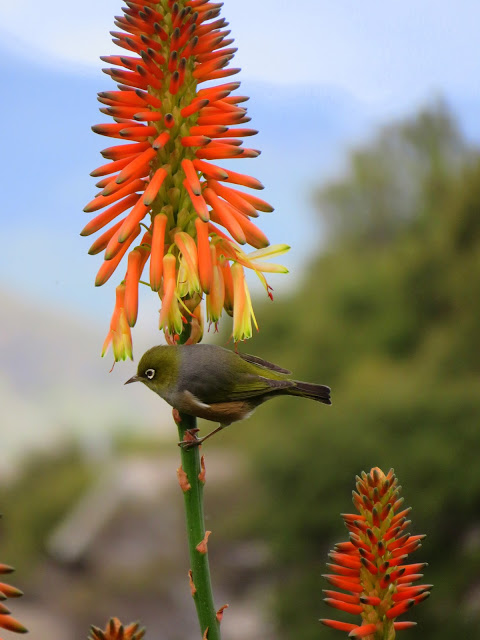 We also get native pigeon, the Keruru; coming into the garden and eating leaves from the Kowhai trees and the small buds from our ornamental cherry.  About half as big again as a European pigeon with spectacular plumage, they're amazingly indifferent to human presence.  The one in the photo below let me get really close and didn't seem at all perturbed. 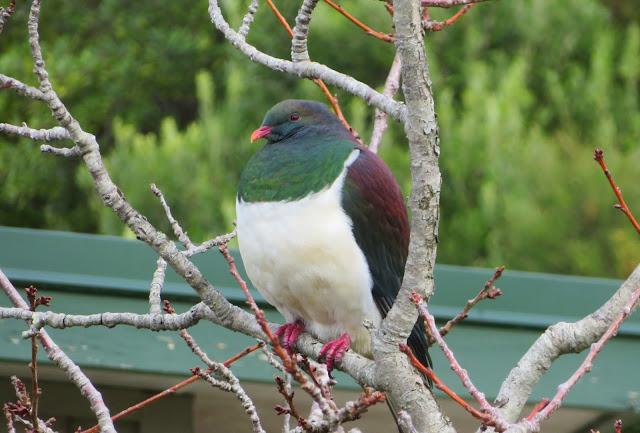 We've made good progress scanning our old 35mm negatives and slides although there's a long way to go yet.  Apart from the time it takes, it's been a joy to jog forgotten memories and in some cases, having no memory of the circumstances the photo was taken in.  It's actually good for the soul!  I thought I'd share a few of the diverse discoveries.

On one of our holidays in Australia about 10 years or more ago, we discovered an aircraft museum inland between Cairns and Port Douglas.  It was a bit run down but had an amazing collection of aircraft.  One of them (haven't found the photo yet) Was a WW2 Bell Airacobra fighter with a contra-rotating propeller setup.  The owner said there were only 2 known examples left in the world and he had been offered a couple of million bucks by an American who just happened by.  He turned down the offer at that time. 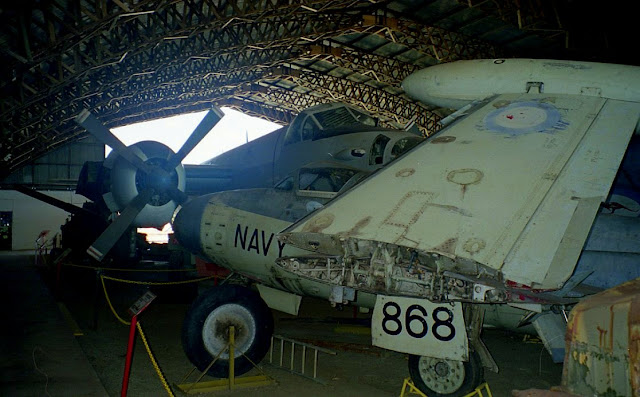 Sticking with the aeronautical theme, the next picture was taken in 1996 when I was working in the southern US.  There was an open air museum attached to the SAC base at Barksdale, Louisiana with an amazing array of aircraft.  The photo is of a rocket sled which was fired down the test track at Holloman AFB.  It's the shell of the supersonic Hustler bomber from the 1960's - one of my favourite aircraft.  Behind it is the business end of a nuclear missile - a Minuteman if I remember correctly. 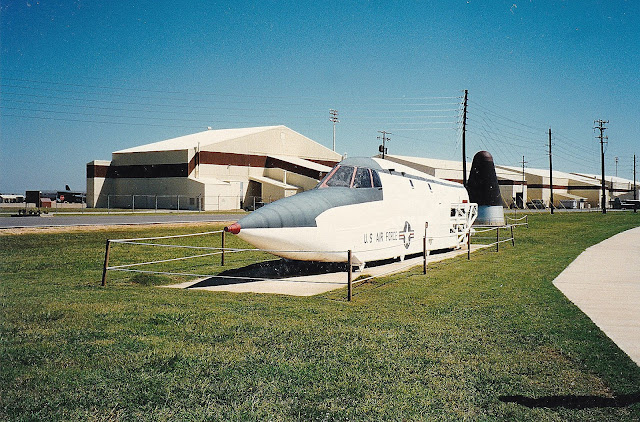 In 1985, we were on holiday in the UK and a mate and I took our boys to the Duxford museum.  Another fantastic place for aircraft enthusiasts.  I still have to find more film from the visit but the next photo is of a Gloster Javelin all-weather fighter,  It served with the RAF from the mid-50's to the late 60's.  I saw them flying at air shows as a kid but had forgotten how big they were for a fighter. 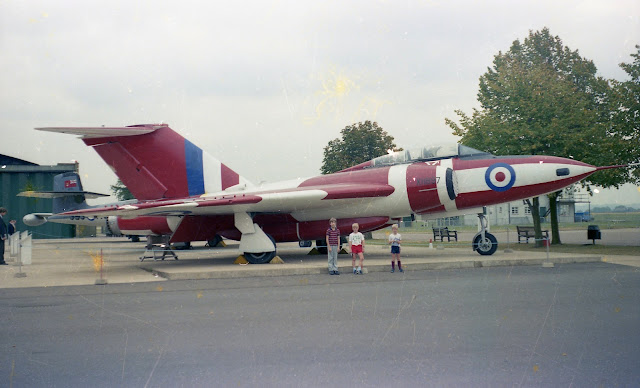 Back onto bikes, I attended a classic bike race meeting in south Auckland in the early 90's and there were some beautiful bikes there, both racing and in the spectator park. 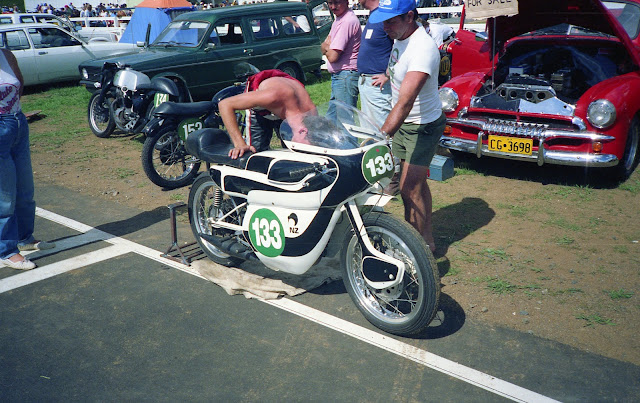 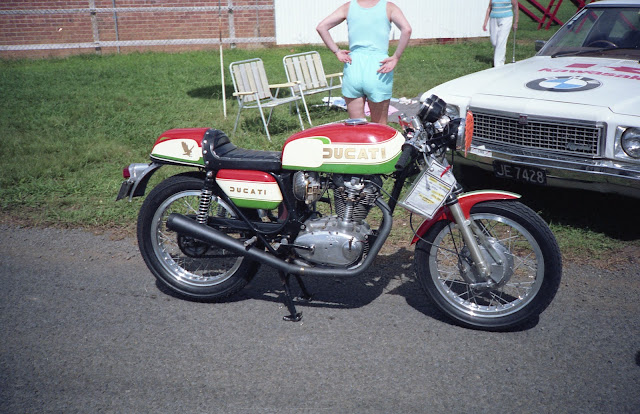 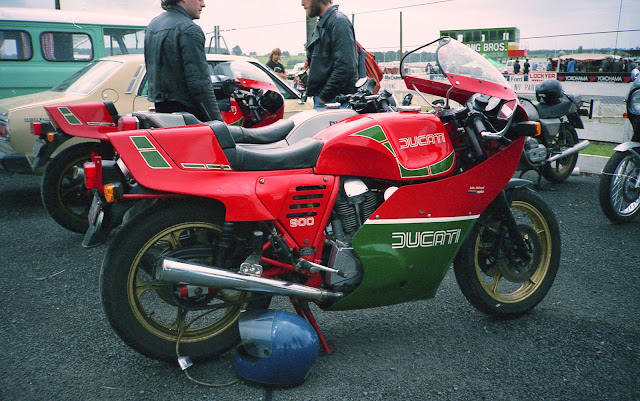 The next two photos which were taken by a mate have an amusing tale to go with them.  I got back into bikes in 1987.  It was only after its purchase that I discovered that I was riding illegally as my UK bike licence had expired.  A check with the then Ministry of Transport confirmed that I did indeed have to re-sit both the theory and practical tests.  The theory presented no problem but I could hardly turn up on an over-capacity bike to take my basic skills riding test, even if that first part was done in a car park.  The only bike I could borrow was a 50cc Yamaha step-through from a mate's wife.  As all good mates do,  he turned up to take the piss and photograph the occasion.  As an aside, the full on-road test which followed the car park component was an anticlimax.  I knew the cop who took me for the test and he knew the circumstances of the re-take.  He sent me all of 50 metres to go round a roundabout and return to where he was standing, then wrote me the pass.  Reckoned it would be wasting everyone's time to take it further. The rest is history! 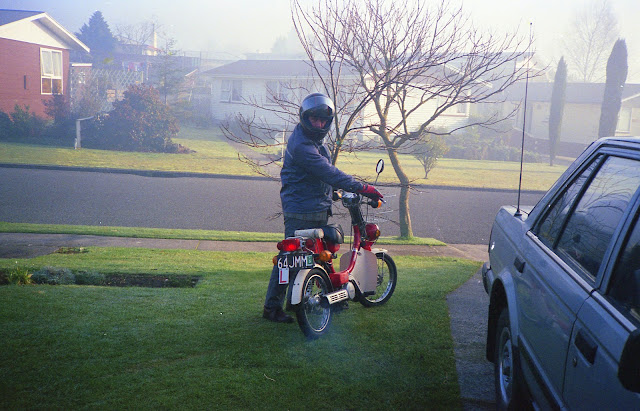 Setting off for the test 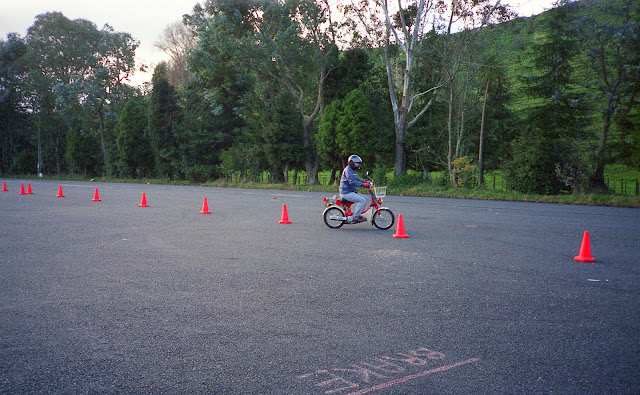 Cone slalom on a Yamaha 50!


The following photo of my Blackbird was taken the day after I rode it home from the dealer in 2001.  My previous bike was a BMW K100 RS which was no slug.  However, it didn't prepare me for the outrageous performance of the 'bird.  I think that it was so quiet and effortless made it even more scary (and impressive).  Owned it for 8 years.  Totally bulletproof apart from the original stator which was a weak point on them. 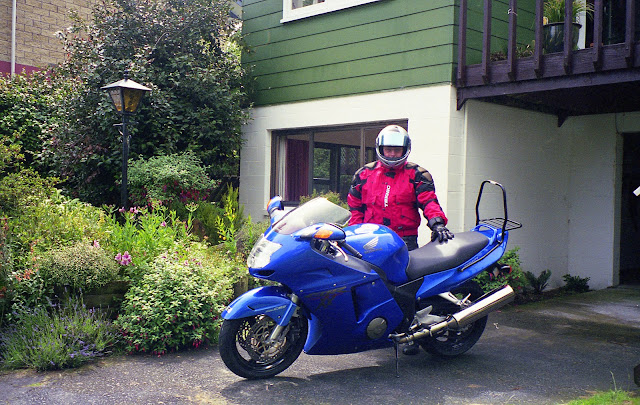 One of the original superbikes

Still on things automotive, Jennie had a sports hatch in the mid-90's called a Mazda Astina GT.  It went pretty well and the roadholding was fantastic.  We gave it to our younger son for his 21st birthday present .  Good thinking by Jennie as it was a good opportunity for her to get the first of her MX-5's. 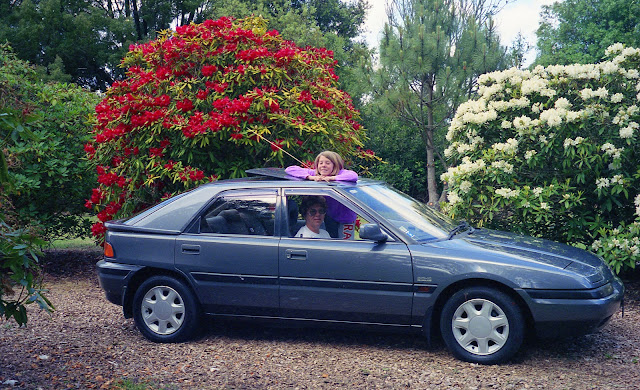 The next photo was taken in the central north island of NZ among the active volcanoes. 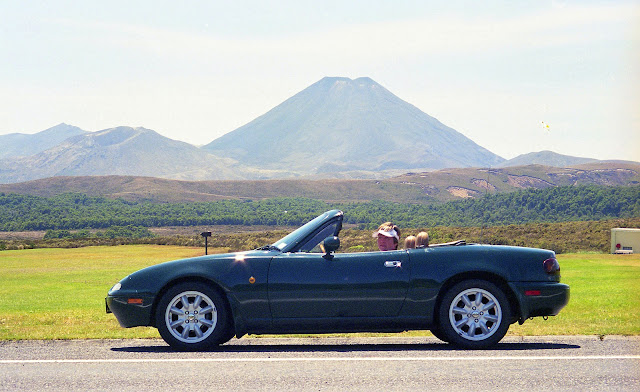 MX-5 amongst the volcanoes

Going on annual school camp with the kids is a rite of passage in NZ and normally involves camping in the bush and long hikes.  They were great fun.  Here's me in the 1980's in the native forest near Rotorua. 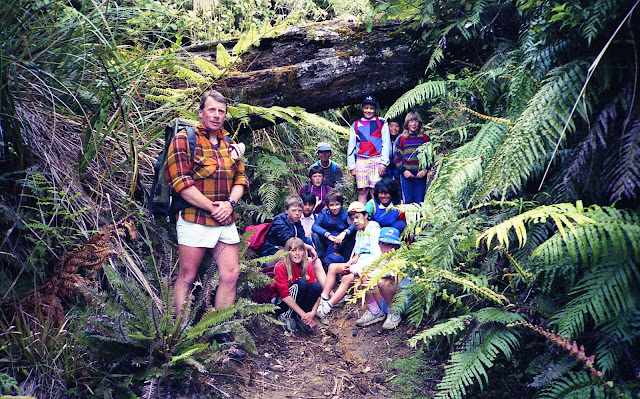 Cataloguing all the negatives and slides has been great for the wetter and cooler days and there's a fair way to go yet.  It's evoking some great memories and is something to pass onto our adult children.