A breakthrough - at last!

In my April post HERE ,  I shared some thoughts about keeping mentally and physically active as we age.  My particular priority was in having sufficient back-up interests as my motorcycling decreases.  I'll be retiring from my official role as an Institute of Advanced Motorists Examiner at the end of the year and it will only be social riding with IAM after that.  A few months ago, Jennie suggested that we think about getting a classic car to have some fun outings together.  She complains that I see far more interesting parts of the country when I'm out on the bike than when we're doing routine journeys in our everyday vehicles.  Fair point and with the extra time becoming available and the prospect of limited international travel for quite a while, it sounded like an excellent suggestion.

I quietly started looking at "classic" vehicles that might interest both of us and not break the bank, not require mega-hours of restoration or be a nightmare to keep running.  As with the bikes I've owned, emotional appeal was incredibly important.  Regular readers will remember my almost impulsive purchase of a Suzuki GSX-S 1000.  Outstanding performance and totally fit for purpose but it had no emotional appeal. Contrast that with my current KTM Duke 790 which makes me laugh every time I throw a leg over it.

Initially, there was a massive amount of reading to be done, not wanting to be sucked in by a car's looks, only to find that keeping certain models on the road is a nightmare in terms of reliability, rusting or a host of other things.  At least with not using salt on the roads in NZ, corrosion from that source wasn't going to be an issue.

Bloody hell!  Who would have thought it would be so hard to spend money?  I showed Jennie the Reliant Scimitar GTE.  She thought that it was as ugly as sin which was really disappointing as I've always loved it.  Well, that went well as an opening gambit, didn't it? 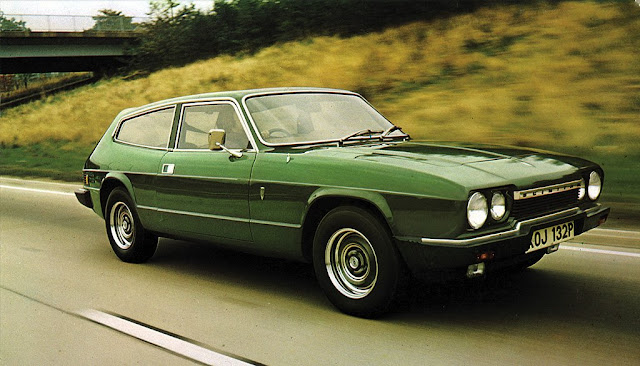 Perusing other classic vehicles for sale in NZ, I came across an early restored Mini Cooper in British Racing Green with a white roof.  We owned a Mini back in the 70's and did my own maintenance (including a complete chassis swap) so I thought this might appeal but the paint job was dismissed as boring, sigh....    She loved this one though: 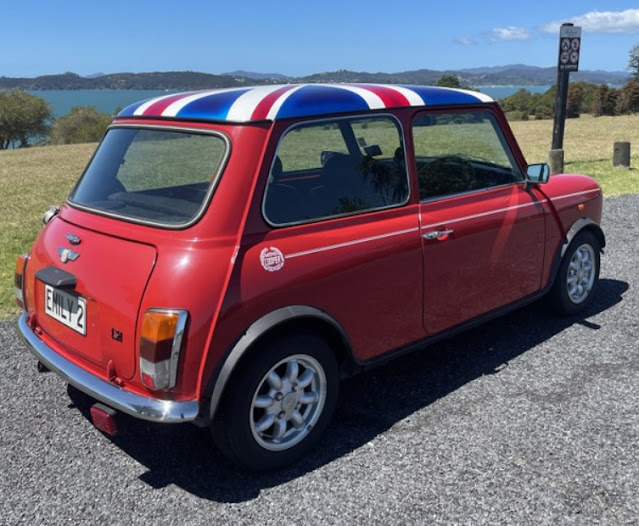 My turn to not be thrilled.  Red cars don't do much for me unless it's a Ferrari but the real killer was a Union Jack sprayed in metallic paint on the roof.  Very professionally done I'll admit but having the prospect of mates and strangers alike making Austin Powers jokes at my expense was not something I looked forward to so that was a non-starter too on my part.

We also had several other non-starters for various reasons, including GT 40 and Cobra replicas.  The final one, which also disappointed me most was a completely restored NZ-made Lotus 7 clone.  Here it is: 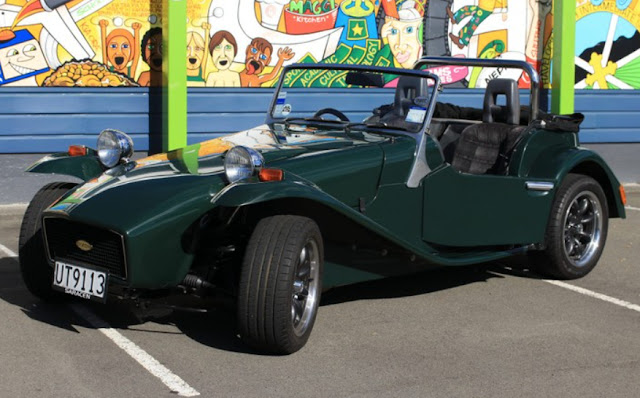 In this instance, Jennie loved it too and with what I took to be a wistful smile, added that in her teens, her first "proper" boyfriend had a genuine Lotus 7.  I was careful not to ask for further details but thought that we were onto a winner, whatever nostalgia the car conjured up.  That is, until she had second thoughts about now being in her 70's and her potential inability to enter and exit it with a semblance of dignity whilst onlookers were present.  After the crushing disappointment and a droopy bottom lip on my part for a day or two, I conceded that she had a valid point.  I probably wouldn't be immune from that either.  Bugger.....

It was beginning to look like the quest for a classic car which we both liked was doomed and then karma stepped in.  We recently completed some theory training for new IAM Observers (mentors) and followed it up with their first practical assessment.  It was a fantastic day out, starting in dry, overcast conditions and ending with heavy rain and slippery roads.  A great challenge which everyone got through very well indeed. 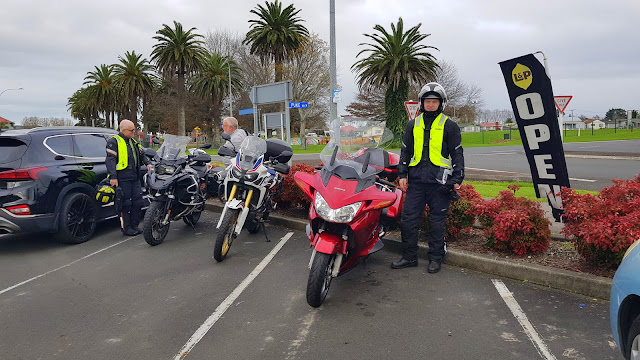 Getting ready for the training ride - Rob, Bruce and Trevor 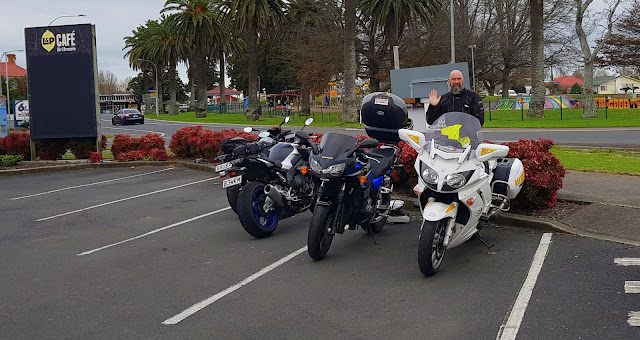 Some more bikes and Scott 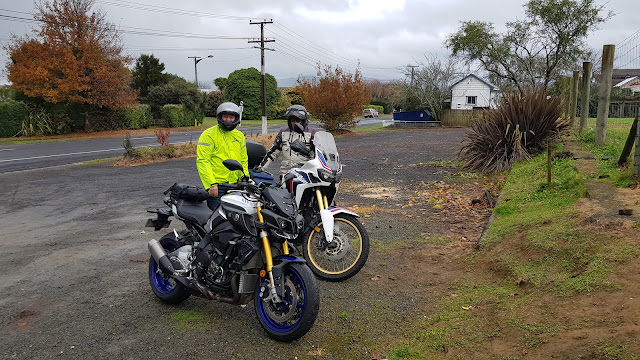 A mid-point debrief with Tony and Andy - rain setting in 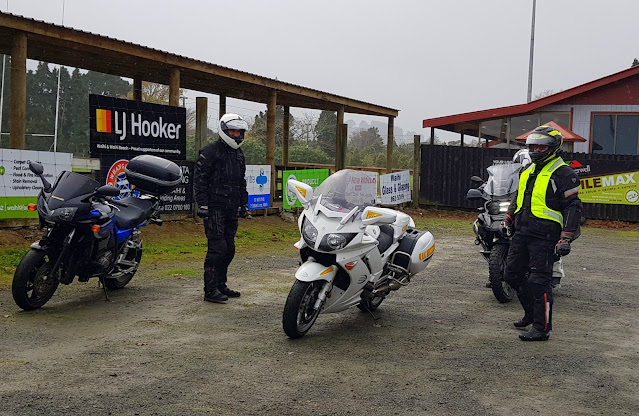 Scott, Bruce and Rob starting their mid-point debrief in the rain

I'd already considered an MGB thanks to an excellent YouTube channel HERE and it so happened that two of the Trainee Observers were serving police officers and one of them had been allocated to me for the day.  Over lunch, we were chatting socially and Trevor happened to mention that he owned several bikes and classic cars.  One of his cars was an MGB and he suggested that this might be a consideration.  My close friend Rick in the UK had also recently mentioned an MGB so when I got home, the For Sale pages of various NZ websites were perused.  First up was a beautiful MGB RV8 roadster, an exceedingly rare beast with a 3.9 litre Rover V8 powerplant.  Sadly, a phone call revealed that it had been sold - more disappointment and more scanning - this was getting rather dispiriting.  Ditto with other adverts where reading between the lines implied, "Expensive bit of crap - needs massive amounts of cash and time".  A few days later, another internet scan revealed an MGB GT for sale and what's more, it was only an hours' drive away!  Jennie also liked the idea of an MGB GT - yayyy!

A call was made and yes indeed, it had only just been advertised and would we like to have a look at it that afternoon?  A quick trip down the coast and to say that we were impressed would be a gross understatement.  The long-term owner had put his soul into the restoration a few years back, never takes it out in the rain and it was close to flawless.  The engine bay was so clean that you could have conducted major surgery in it!  It was imported from the UK in the 1980's and subsequently underwent a full restoration with a bit of modernisation such as electronic ignition and Spax adjustable rear shocks. Expensive durable K2 twin pack paint as well, matched to the original factory Blaze Orange colour - as good as it gets! 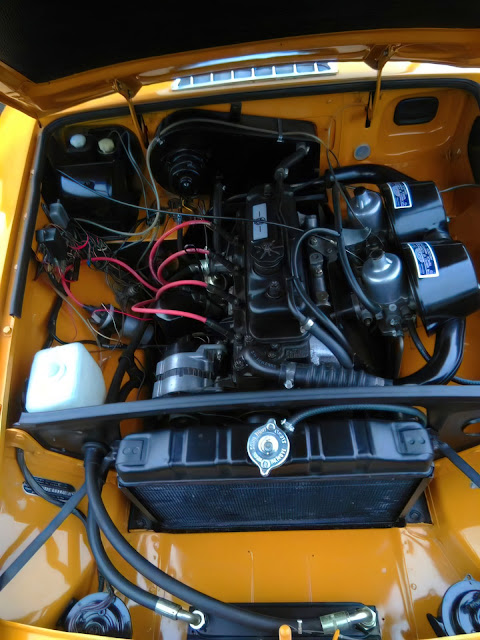 The engine bay - clean, or what???
The rest of the car was similarly immaculate and the time spent restoring and maintaining it must have been a genuine labour of love.  Brian, the vendor, is older than me and was looking to downsize his property and belongings but it must be painful to let such a beautiful car go, even if it does only get used on infrequent occasions. 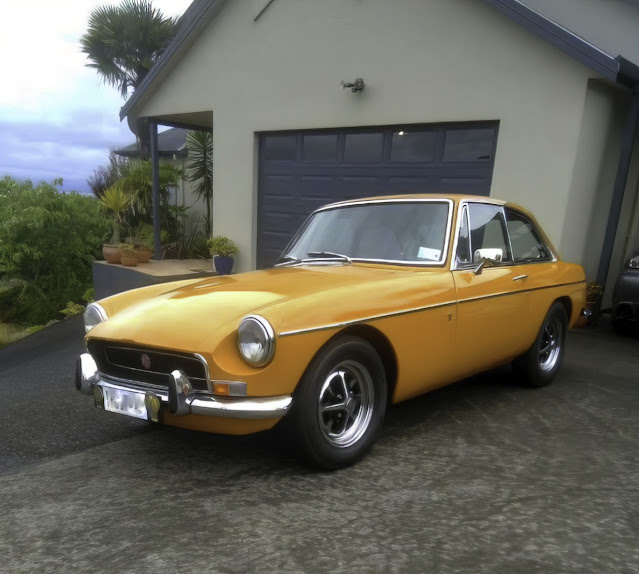 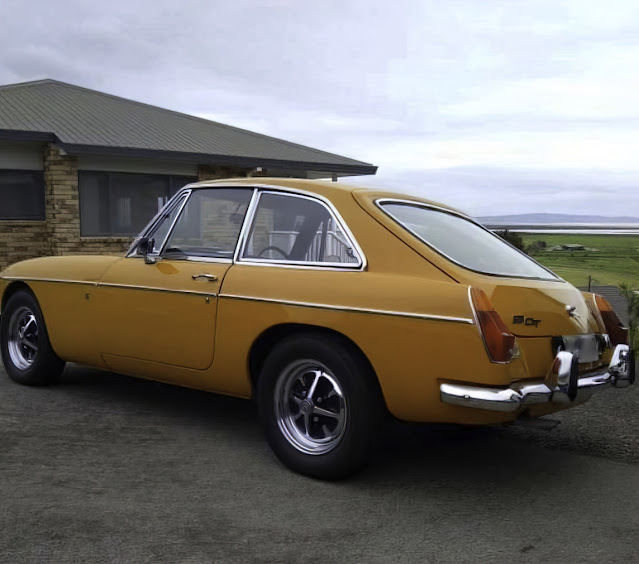 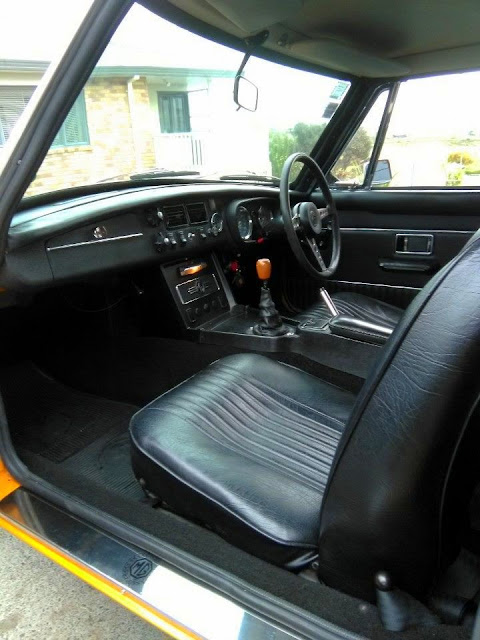 Clean, original interior, stainless kick plates
Jennie would have preferred another colour option than Blaze Orange. She calls it Karitane Yellow (a Kiwi euphemism for baby poo)  but that wasn't going to stand in the way of our ownership.  I love it as it's so 70's and you certainly wouldn't lose it in a busy car park!  To cut a slightly longer story short, the deal was done on a handshake and we will shortly take posession of a beautiful classic car.

In an interesting coincidence, our 49th wedding anniversary is this week and the MG was made 49 years ago in 1972.  In another weird coincidence, Jennie and I take part in a fortnightly "pub quiz", teamed up with our neighbours.  They couldn't make it the evening after we sealed the deal on the car so we teamed up with another couple who have a holiday home near us.  Turns out that the husband is the Treasurer of the MG Owner's club in NZ - that's karma for you!

Going back to the original intent of having another fall-back interest when I finally stop motorcycling, plus adding to the things that Jennie and I can do together right now; it looks like we might have nailed it.  Owning a classic car does require a certain level of commitment which should keep me busy although I hope that most of the time is spent driving it, not working on it!  However, all sorts of incidentals which go with classic British car ownership are now starting to crop up.  Imperial spanners and sockets for starters as most of mine are metric.  The Garage Elves seem to have spirited away my decades-old timing gun and I gave the axle stands away decades ago  Then there's lubricants suitable for older vehicles, yada, yada, yada ....  Hopefully, exciting times and adventures ahead!

To finish on a lighter note,  I’ve owned a pair of Gerbing electrically heated gloves for 4 or 5 years now and they’re far superior to heated grips for winter riding. Unfortunately, some forgetfulness on my part saw me subsequently buying another pair from Revzilla whilst trying to fly under my Chief Financial Officer’s radar.

I’d applied some leather conditioner to them and as it was a cold, miserable day, I put them in a slightly warmed (but turned off) oven to assist with the absorption.  I then wandered off to do other stuff and they were rediscovered by Jennie well after she’d switched on the oven to prepare dinner.  I thought that her comments directed at me were remarkably restrained given the amount of smoke that emanated from the oven.  A novel twist to the term "heated gloves".  The pork cutlets still tasted ok though………