A couple of midwinter runs

I've been a good boy for the past week, finally organising the purchase and installation of a new pyrolitic wall oven which Jennie's been waiting nearly 12 months for me to measure up and get my a into g .  The argument that good things are worth waiting for didn't seem to carry much weight in this particular instance.  Nonetheless, it attracted a few brownie points and allowed me to go for a couple of rides without the domestic task list being pointed at.   I'm exaggerating slightly of course, but not about Mrs J being of especially charitable disposition at present.

The oven no doubt played a part, but I suspect the real reason for her joy is the acquisition of a new furry friend to replace her beloved Thomas, who passed away aged 17 earlier this year. We drove to the cat rescue centre down the coast about 30 km from us a week ago and she fell in love with an 8 month old kitty called Sam.  Sam and his brother were rescued from a farmer's field when they were tiny and amazingly, his brother now resides further down our road!  This is the exceptionally handsome Sam, a silver and grey tabby with gold eyes and a tail like a lemur.  And man, can he talk!  Usually at around 2 am when he's running amok whilst the rest of us are trying to get some shuteye. 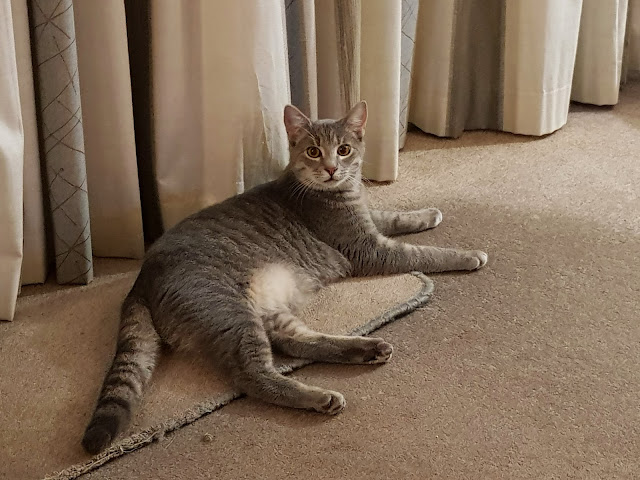 We're keeping him indoors at present until he fully settles down.  Annie cat is relatively indifferent to his presence at the moment unless he sits in her favourite place, namely my lap.  Anyway, all this is a prelude to a couple of days motorcycling, even when there are jobs still waiting to be done!

My good mate Tony, who is also a key member of our regional IAM observing team has just taken delivery of a Yamaha MT 10 SP.  He flew to the city of  New Plymouth to pick it up last Thursday and rode it round to a renowned suspension guru in the same city to have it set up from the get-go.  A combination of new tyres, damp roads and an unfamiliar bike of course, meant that the 300+ km delivery trip home was naturally a fairly cautious affair.  When he rang to suggest a Sunday ride on the Coromandel Peninsula and what with the perfect weather forecast, it would be rude to say, "Sorry mate, got a few domestic jobs on".  Like that was ever going to happen......

The MT10 SP is Yamaha's flagship naked sports bike based on the crossplane-engined R1.  With electronics controlling everything you can think of and a heap of stuff you've never heard of, plus Ohlins suspension front and rear, it's a real weapon that handles like it's on rails.  The paint job looks fantastic in the sun too. 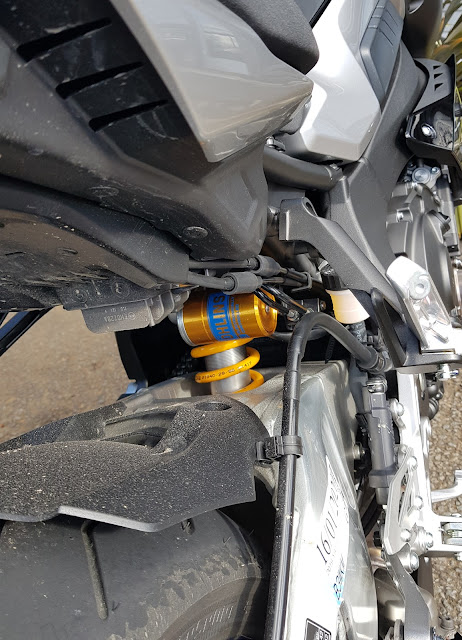 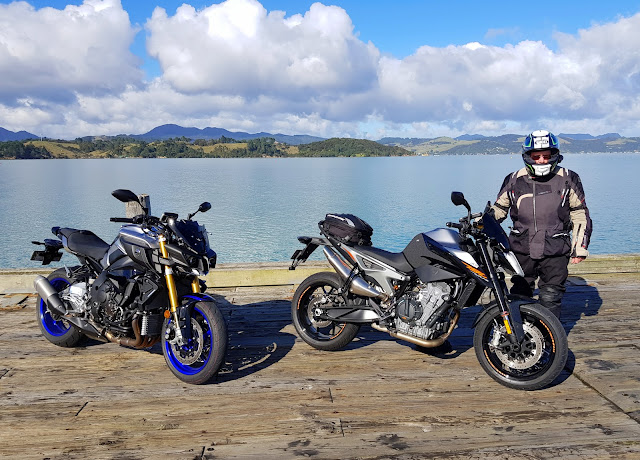 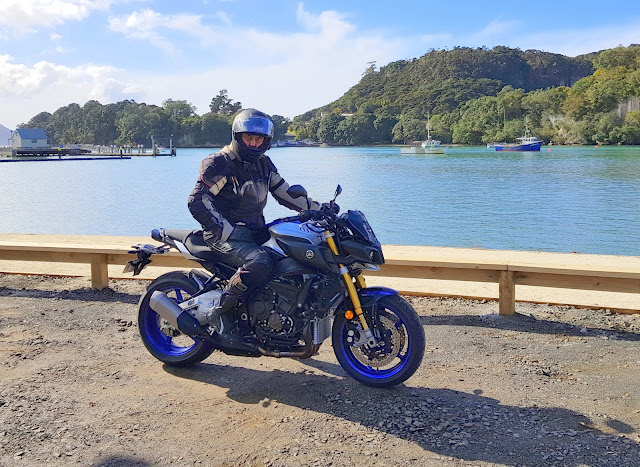 Tony and his new beast at Whitianga
Does his headlight assembly look like it's got an open mouth ready to bite?

Following him as he fired it out of tight corners, the note from that crossplane 4 cylinder motor sounds amazing - quite unlike any other 4.  As the school holidays have just finished and it being mid-winter, there aren't too many visitors on the peninsula so it's perfect for a brisk(ish) ride on the bikes. 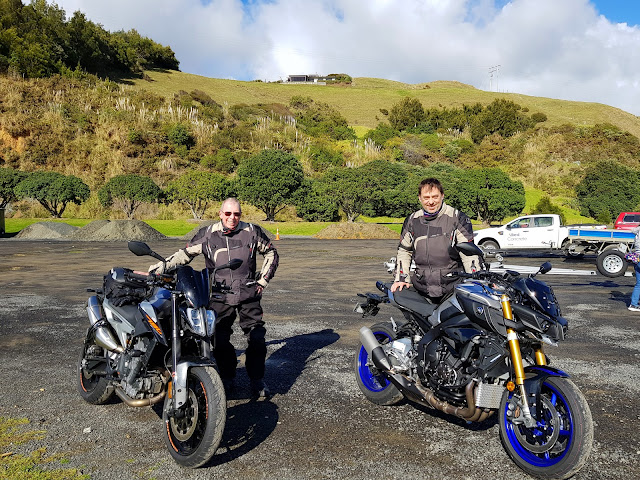 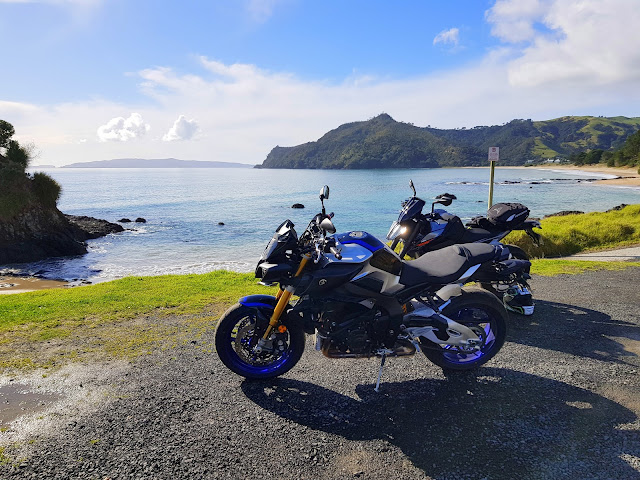 Lunchtime saw us at the Coroglen Tavern for their delicious scallop burgers and curly chips, washed down with ginger beer and lemon, lime and bitters - yummm!  Incredibly, we were the only bikes there as in the warmer weather, it would be packed.  We started the ride in sub-10 C temperatures but by lunchtime, it was a balmy 16 C.  I guess that the early morning heavy fog in the Waikato and Auckland provinces would have put a lot of people off but fog is a rarity on the Coromandel Peninsula. 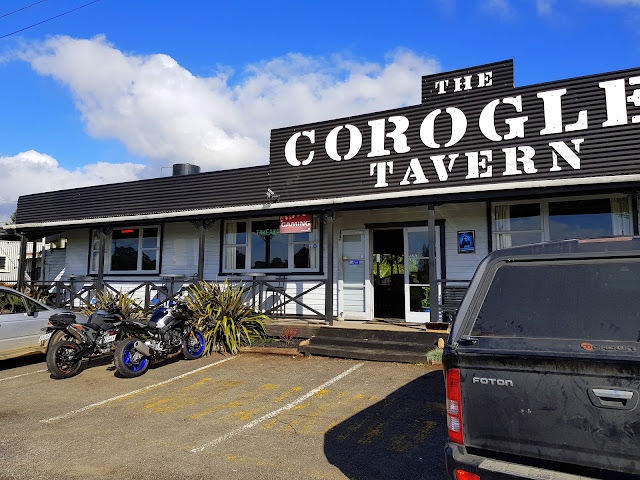 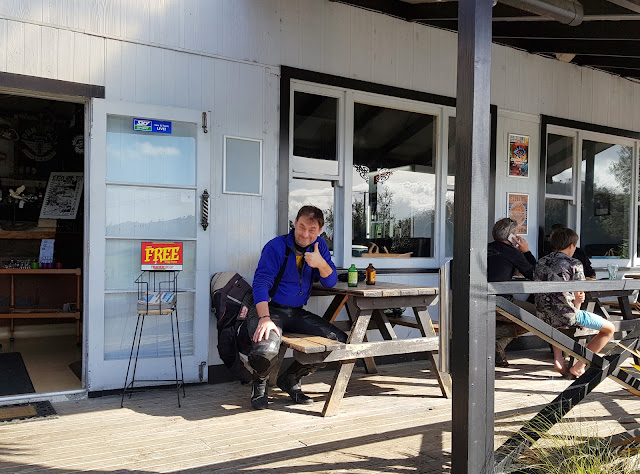 After lunch, it was time to part company with Tony heading south to home and me in the opposite direction.  What could be better than great company, good food, empty roads and two wheels?  As Tony remarked, "My bike is not a toy, it's a lifestyle investment of the highest quality and efficacy".  Sounds like a speech that he might give to his wife for justification, but who would argue that they're genuinely good for the soul?

Today saw me retrace yesterday's route, then travel further to the small town of Whangamata and back.

Today's wee run, but in rather less time than Mr Google suggests!

Although one doesn't need an excuse to go riding, it was a great opportunity to go and collect a watch which I've just had serviced.  Sure, it could have been couriered back at a fraction of the cost but where would the fun be in that?

I've had a TAG dive watch for over 2 decades.  About 6 years ago, it needed a full service including seals.  I foolishly sent it to the main importer and they duly charged me close to NZ$600 for the privilege - bloody hell!  I guess it's a bit like taking your Merc or BMW to a main agent for your service - they screw you because they assume you can afford it.  Anyway, it recently came to my attention that there was a genuine old-time clock and watchmaker living in Whangamata.  It was time for a replacement battery and service so a call was made and yes, he was happy to do the job and no, it would not cost an arm, leg and first-born.

Another lovely day, albeit low single digit C temperatures early in the morning but nothing that heated gloves couldn't handle so off we went. 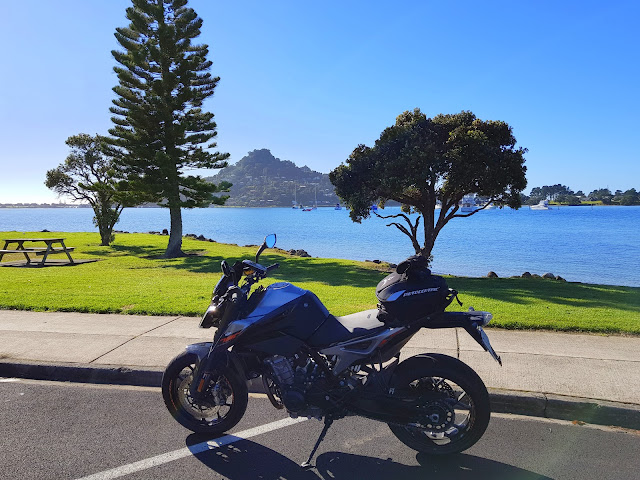 Tairua with Paku extinct volcano in the background

Although Paku is classified as extinct, one can never be sure as NZ sits on the Pacific Ring of Fire and has several active volcanoes.  I admire the confidence of the residents who have built houses on the side of it as shown in the photo below. 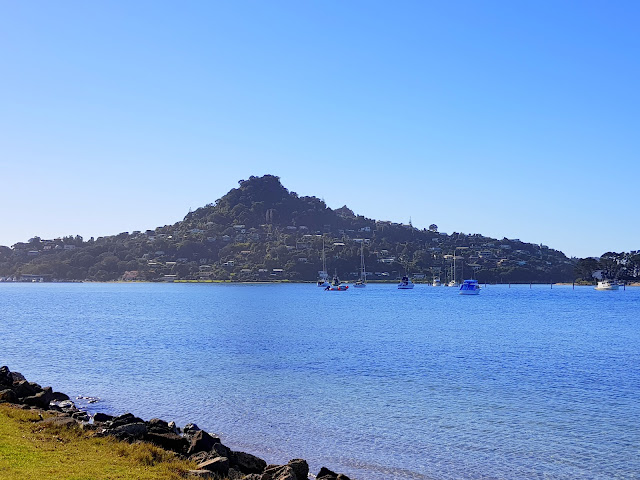 Paku, adorned with houses.  If the volcano doesn't get you, a tsunami will!

The watchmaker was a delightful chap and clearly knew his stuff.  The cost of the full service including fixing a partly working day/date function with a new part? A princely NZ$90!  Wonderful service and value but it makes me rather annoyed at the main service agent/importer who thinks they can rob people blind.

Just time for a decent coffee, a trip to the local marina to see the floating gin palaces and then re-trace my steps back home in minimal traffic.  All in all, a soul-lifting couple of days and not a bad week all round! 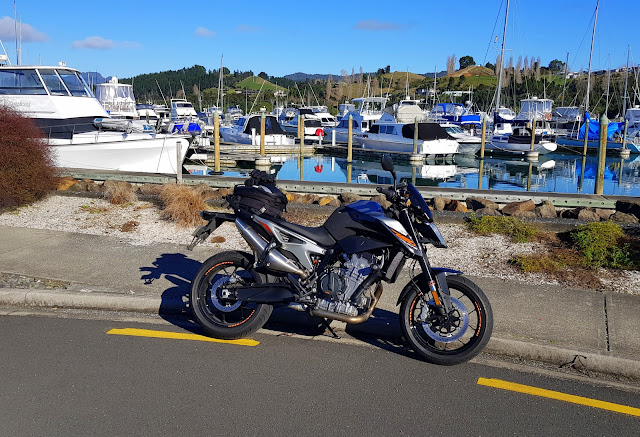 The Duke at Whangamata marina