Some riding reflections and other philosophical stuff......

As regular readers of this blog know, I joined the NZ branch of the Institute of Advanced Motorists in April 2011. The trigger for this was that being 63 at the time, I wanted to sharpen up my skills so as to safely extend my riding career for as long as possible. Like most of who have been riding for a long period, I knew I’d picked up some bad habits which potentially put me at risk but it was hard to articulate where I was falling short and by how much. Correspondence with eminent motorcycle journalist David Hough at that time about ageing motorcyclists ended up with him challenging me to stop procrastinating and actually do something to future-proof my riding which neatly backed me into a corner!

Without going over old ground the UK Police Roadcraft system seemed to offer the best potential for dramatically improving my riding. (The summary of the initial benefits to me is HERE). It paid off massively and the on-going nature of the programme still allows an assessment of the quality of my riding (and mentoring ability) against measurable standards which have been proven to be highly effective over many years. There's much more to it than I can describe here but it's shifted my pleasure from riding fast (with all the attendant risks) to riding well. That's not to say that I don't enjoy a good fang from time to time but it's now a question of time and place, backed up by a system which allows you to decide what's prudent and what's not.

After sweating blood and tears and passing the IAM Advanced Test after 8 months of driving my mentors (called Observers) insane, it seemed a great way to repay the faith of those Observers by training as an Observer myself. The training took the best part of a year before being able to take the practical and theory tests and in late 2014, sat a further test to become regional Senior Observer. That journey has been periodically documented earlier in the blog.

I hadn’t intended writing any more about IAM but there have been some recent events which have given pause for reflection.

The first was taking on a new student (called an Associate) late last year to mentor towards taking his Advanced Test.  Rob is an experienced rider and currently rides a wicked-looking Hayabusa. 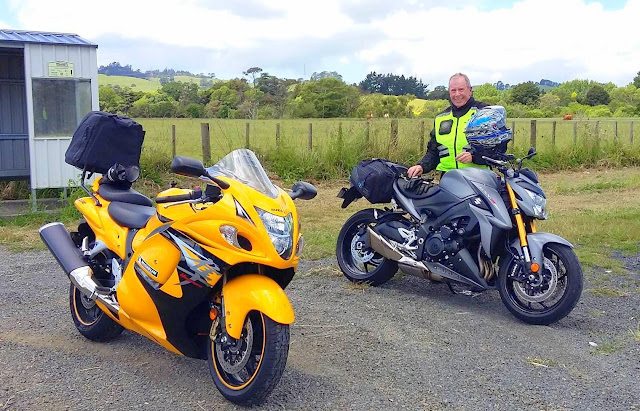 By profession, Rob is a fuel tanker driver with additional instructing responsibilities.  With his motorcycling experience on top of that, you'd be correct in assuming that he is among the top echelon of public road users in NZ when it comes to skill and safety awareness.  And yet in the first conversation with Rob, he felt that there was considerable scope for getting better.  Very early in the process, Rob mentioned that he would be keeping a blog of his experiences with IAM, partially as a record for his own pleasure and reflection but also for other riders who may find his journey of interest.  I can highly recommend Rob's blog for sharing his thought processes and experiences about advanced road riding.  I might also add that his blog has been very good for me.  It's a fantastic reminder that as a mentor, people learn and react in different ways.  I have a responsibility to interact and assist with the learning process which suits the individual and not take a "one size fits all approach" which is great for staying grounded.   The blog is both candid, humorous and inspiring; really highlighting the attention to detail necessary to reach the standard required to consistently ride at a high level and pass the Advanced Test.  Rob's first post can be found HERE and subsequent posts from the side menu or Newer Post button at the bottom of each page.  Rob's posts show that no matter how good any of us think we are, there is always plenty to learn.  Even more importantly, it shows how important having an open mind to learning is to make real progress, whatever the topic.  Hope that you enjoy Rob's journey!

The second event giving cause for reflection is that last week, another of my Associates, Lloyd; passed his Advanced Test and will soon move forward to Observer training, eventually mentoring his own Associates and keeping the cycle going. 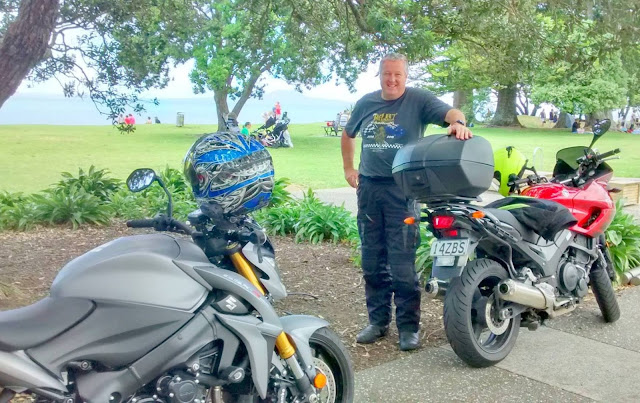 Lloyd's test pass was announced by the Chief Examiner on the IAM NZ Facebook page.  Lloyd was inundated with congratulations from IAM members from around NZ.  Not empty gestures but sincere heart-warming words.  Pondering on this, it's a fair bet that the responses are a result of a couple of things.

Firstly, IAM members are well aware of just how demanding the journey to a test pass is and celebrate success with the individual concerned.  Sometimes, it seems that the world has gone too politically correct and that everything is getting dumbed-down to the lowest common denominator and simply taking part is sufficient, whether it be school exams, school sports or whatever.  Sadly, that is not good preparation for the real world.  It's therefore refreshing to be involved with a process which makes no apology for being extremely demanding. Apologists might call it "elitist" which is actually a country mile from the truth.  Stuff 'em - since when has Excellence been a dirty word and not something to aspire to?

The other factor which I'm sure plays a part in celebrating successes within IAM NZ is that there is a deliberately strong "no ego, no hidden agenda" culture which is reinforced at all levels of the organisation and all stages of development.  This means that members genuinely want each other to succeed and willingly help each other out.  That sort of climate provides a safe and supportive environment in which to learn something which is far from easy.  All I'll say is that it's both a pleasure and privilege to be part of such an organisation which promotes not only riding excellence but the spin-off of  strong personal growth.  Leaving the final words to David Hough, he said that the instructor always gets far more out of it than the student.  Right on the money David - we never stop learning!