I'm fairly well educated and thought my problem-solving skills were reasonable so why is it that the moment that our desktop PC decides to misbehave, I turn into a knuckle-dragging moron with psychopathic tendencies?  Even the cats steer clear of me when something goes wrong with the computer.

The Institute of Advanced Motorists in NZ is growing fast and emails with documents attached leave a bit to be desired in terms of rapid communications between regions.  Similarly, it's difficult getting key players physically together to do some forward planning.  Enter Microsoft on their white charger, bless 'em.  They provide a suite of tools which falls under the general title of Microsoft Teams free of charge to charitable institutions and all the indications so far is that it's an absolute gem and will save bucket loads of time.  It makes document sharing and editing in real time a piece of cake.  Nice clear folders giving multiple access to all the key documentation any of us need.  All installed and working first time up by one of our IAM Observers who also happens to walk on water when it comes to IT systems.  He also talks in clear, unambiguous English but more on that later.  Shame he rides a BMW.

Simple, free and works brilliantly - screen shot of part of the system

One of the other superb features of MS Teams is the ability to multi-party teleconference by video, or voice alone.  This is a godsend, just as it is in the normal business world or academia.  It's particularly valuable to my region of IAM which covers an area of some 34,000 sq km.  Getting the voluntary regional Observing team physically together for planning purposes is a nightmare but with teleconferencing, easy peasey and all part of working smarter.

In the short while the system has been working, I've used a combination of tablet and Samsung S8, principally because my desktop PC has no camera or mic.  However, having a nice big screen to use whilst teleconferencing would be a big plus for an old codger like me, so let's buy a video camera with an in-built microphone and hook it up - how hard can that be?  Well as it happens, soaking up half the weekend with several losses of temper, not to mention plummeting self-esteem! 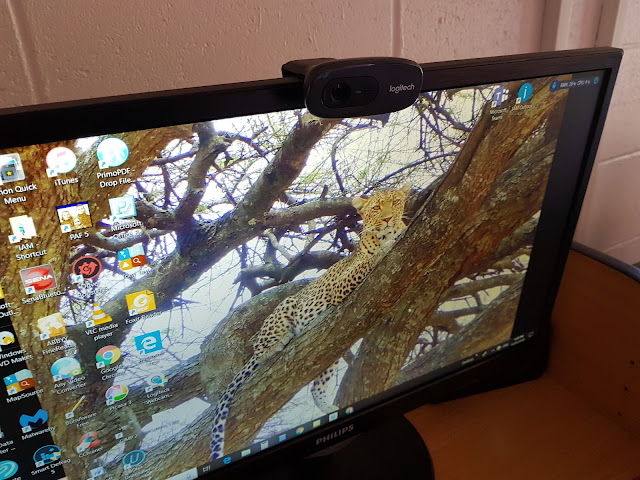 Nice, simple Logitech camera clipped to the top of the PC screen

Last Friday, my Logitech camera duly arrived by courier and the sparse instructions optimistically said, "Clip it to your screen, stick the other end in a spare USB port and the world will be your oyster".  You just know that it's going to end badly, don't you?  Although the video worked fine, the audio was non-existent and the control panel only partially resembled what was on the instruction sheet.  After an hour or so of blundering about and finally admitting defeat, a quick search of the internet implied that Windows 10 was the work of the Devil and the various builds and patches ensured that getting peripherals to work properly had about the same chance as winning Lotto.  What to do now?

With a sinking feeling, I explored making contact with Microsoft or Logitech and it appears they've both got quite cunning to avoid both expense and direct responsibility for solving the problem.  I was directed to what are euphemistically called "Community help boards" where supposedly IT-savvy people unconnected with the main parties try and solve your problem.  Messages detailing the problem were duly placed and literally within minutes, replies were posted.  This turned out to be quite a depressing experience as they may well have been talking in Martian.

An example: "Yes, Windows 10, build version 17134 stuffs up the camera drivers and you need to roll it back to an earlier version called Zog 1634, revision xyz "(I made that bit up but you get the picture).  Here are the instructions on how to do it - we hope that you have a doctorate in computer systems as it will only take 24 hours in that case".  One look at the instructions indicated that trying to follow them would likely end in complete disaster.  The community boards yielded completely differing ways of solving the problem but there was a common thread.  When I asked whether their solutions would solve my problem, you could sense a mental crossing of fingers and a long-winded answer which boiled down to "Maybe".  Plain English and confidence in getting a good outcome are clearly skills lost to IT people.

Not wishing to turn a bad situation into a hopeless one, I had a nosey about on the Microsoft website and saw that a major update of Windows 10 was being rolled out.  Windows 10, version 1803 to be precise, so that it looks as if I know what I'm talking about.  Using that time-honoured IT expert solution of crossing my fingers, I started the download and a couple of hours later and answering some Microsoft startup questions which I took an (un)educated guess at EVERYTHING WORKED, INCLUDING THE MIC!!  Why didn't anyone simply tell me that there was an update and to try that?

Success is why you see a smile in the next photo taken on the webcam.  If it had been a video, you would have heard me singing ,"We are the champions". 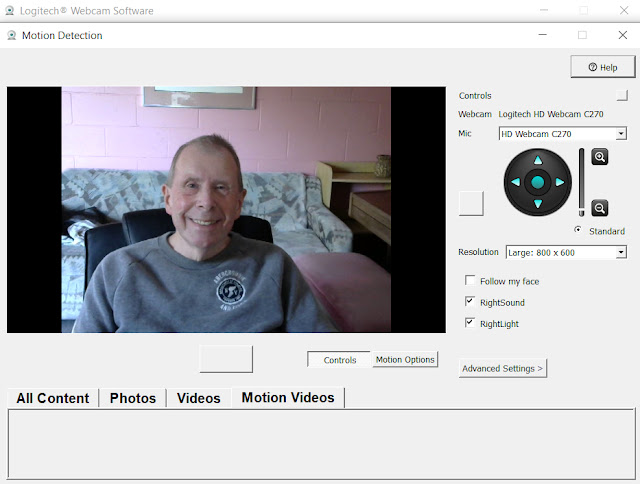 Having now offended every human being on the planet with IT skills, I will take my leave.  Running the maintenance engineering team at a large pulp and paper mill was child's play compared with hooking up this video camera to the PC!  Good job spending a whole Saturday getting a solution was whilst it was pouring with rain and I didn't want to get the Suzuki covered in crap!