Summer (meteorologically speaking) starts in NZ today and in our neck of the woods, the weather has been glorious for the last couple of weeks with temperatures in the mid-20's C or a bit above.  Perfect for motorcycling.  Truth be told, we could do with a spot of the wet stuff as cracks are appearing in the garden.

A week last Sunday, I took part in a social ride with members of the Institute of Advanced Motorists from our region.  We all converged on the tourist town of Rotorua, known for its bubbling mud pools and geysers.  However, it wasn't to see the natural wonders.  A Rotorua resident called Sue runs a sideline business called Plugz 4 Lugz making custom moulded ear plugs.  One of our members had arranged for her to run a production line for our members.

About 4 years ago, Sue had made some plugs for me because off the shelf plugs always seemed to work loose and weren't particularly effective - must have weird ear canals.  The plugs which Sue made were just fabulous but were getting a bit ratty with use so it was time for new ones.  The plain ones actually improve the quality of bike-to-bike comms by reducing wind noise.  She also makes them with in-built speakers.  The round trip for me was a little over 400 km but we all know, it's about the journey, not the destination. 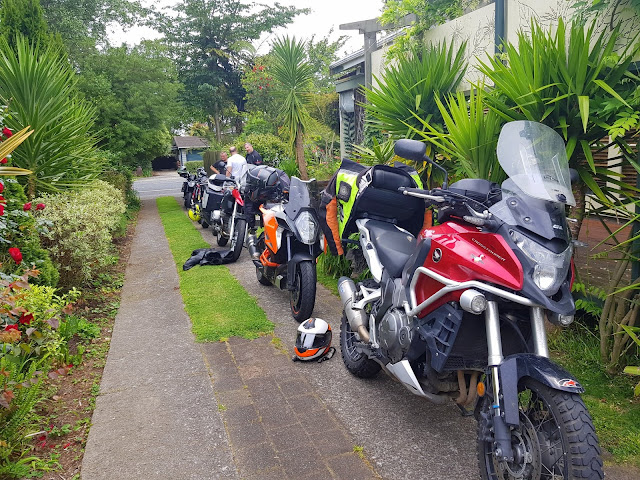 Bikes lined up in Sue's driveway

It was really well-organised with Sue working round everyone and injecting coloured silicone of their choice into ears and leaving them for a few minutes to set.  Once that was completed, we all headed for lunch at a local cafe whilst Sue trimmed the plugs and sealed them with a clear coat.  A thoroughly enjoyable ride and great to catch up with members from various parts of our region which covers some 40,000 sq km. 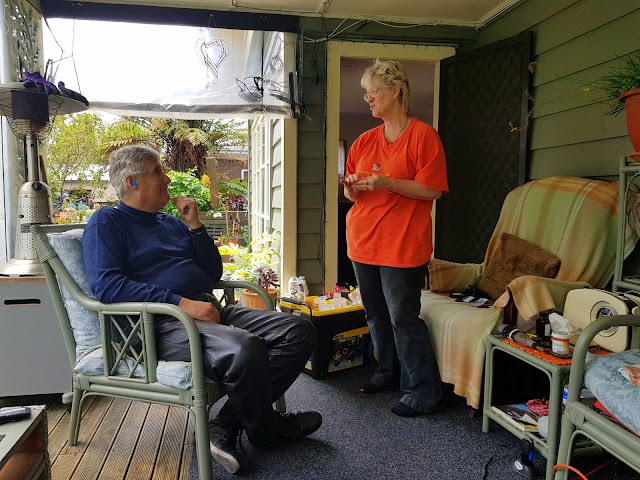 Sue, with Rex waiting for his plugs to harden 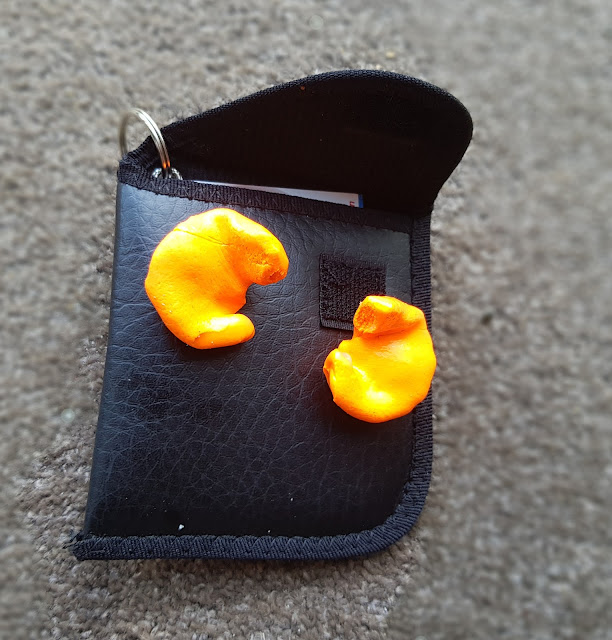 That was one of the fun bits, now for a frustration.....

Doing a job at home (hanging out the washing actually!) and I noticed some odd-looking "floaters" in one eye which had just appeared.  To cut the story short, we ended up making a 350 km round trip to an eye specialist who diagnosed a small retinal tear which bled into the eye and it was fixed with laser treatment which took all of 10-15 minutes after a thorough examination.  Only pain was to the wallet.  There was one lighter moment though.  In the hope of helping with the diagnosis, I sketched what the floaters looked like and also took a graph of my blood pressure over the last year in case it had any relevance (it's pretty good for my age by the way).  When I handed them over, the specialist put her head in her hands and said, "Are you an engineer?"  I asked her how she knew.  She replied that her husband was an engineer too and he once took along a spreadsheet when he visited his doctor.  I replied that it seemed  like a perfectly normal thing to do which caused much laughter and eye-rolling between Jennie and her, sigh.....

Having got that out of the way, the next job was to take an IAM member for his Advanced Police Roadcraft Test.  It involved sitting a theory paper, then taking a practical ride of nearly 2 hours covering city and expressway work, followed by a spell on rather challenging country roads.  It also involved him giving commentary of what potential hazards he was observing and how that was impacting on his actions.  I'm happy to say that it was immensely pleasurable for both of us as he absolutely aced the test - a considerable compliment too to his mentor.  To see the massive improvement in riding skill and personal safety since him joining IAM last year is more than ample reward for doing what I do. 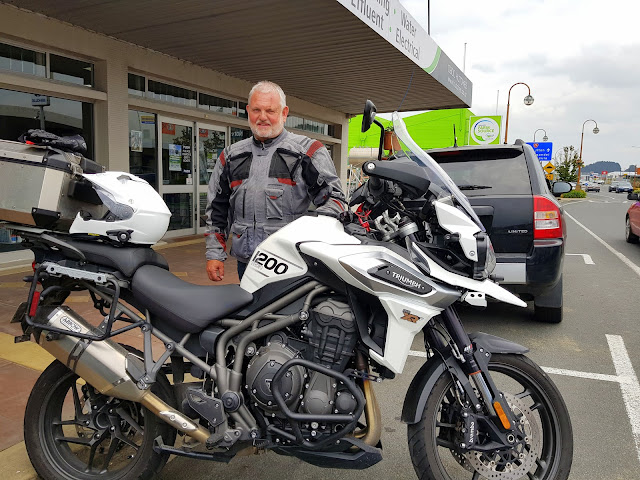 Bruce at the end of his Advanced Test

An interesting observation which won't come as a surprise to adventure bike riders......

Bruce rides a Triumph 1200 Explorer.  One country road on the test was exceptionally twisty with limited sight lines and the sealed surface was pretty rough.  The torque of the 3 cylinder motor coupled with compliant suspension meant that he could safely maintain great progress in those conditions.  On the Duke 790 with sport-oriented suspension and less torque, I was having to work a lot harder than Bruce.  I rarely use my quickshifter for up-shifts but was certainly doing so on that part of the ride to get constant drive out of corners.  Clear proof that a well-ridden adventure bike is quite a weapon, especially on less than optimal road surfaces.

The final frustration was that on the way home from the test, my eye started bleed internally again.  Negotiating the twisty coast road with effectively one eye called for a fair bit of care through losing my depth perception.  Yet another 350 km round trip the following day to the specialist with Jennie driving.  So much crap in the eye that the specialist couldn't make a diagnosis.  A further trip is scheduled in a few days when things have hopefully settled down.  Not a smart idea to be driving or riding in the meantime but Jennie has a few menial tasks lined up to keep me out of mischief.  Let's hope that I can continue my motorcycling career for a while yet!
Posted by Geoff James at 12:12