With spring having arrived and relatively few C-19 restrictions in NZ, it's been a busy week with more to come over the next few weeks.  Regular readers know that a lot of my riding is as an Examiner with IAM, taking civilian riders for their Advanced Roadcraft Test - a system developed by the UK police and used internationally.

This week, I've knocked up just over 900 km in combined travel and the actual testing of two participants, both of whom rode to a high standard and passed with flying colours.  I don't normally mention much about the individuals concerned on the blog but in this instance, it's worth commenting.

Activities such as riding, driving, flying and sailing all require high level training, good judgement and situational awareness to perform at an exceptional level.  Much of this comes over time and in the case of the younger age group with lots of testosterone sloshing about (said by an old geezer!), it's no surprise that they are over-represented in road accident statistics.

I was recently approached by another region of IAM to test one of their members as they were temporarily short -handed.  Happily agreed and arranged a meeting some 140 km away from home.  The only things I knew that he was relatively young, and had passed his pre-test check by another Observer/Instructor whom I knew and respected.  Arrived early and watched as another rider came into the service area on Auckland's southern motorway.  The rider was wearing leathers with the number 46 on them and a replica Rossi helmet.  He was also riding one of Honda's best ever sport bikes, the VTR1000 SP1, equipped with noisy end cans.  This was Cameron, the young man I was due to test - turned out that he was just 19. 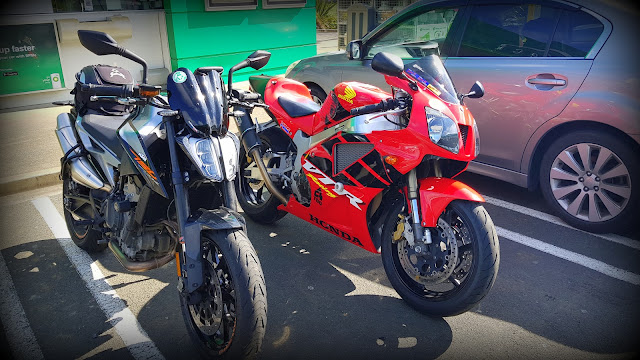 Having spent months being tutored and being recommended for the formal test, it was obvious that he wasn't going to be a complete squid but I wasn't sure what to expect when Cameron mentioned that he raced a 250 Hyosung in club circuit racing.  First thing was to put him through a theory test covering advanced roadcraft and the NZ road rules.  Pass mark was 80% and Cameron scored 95%.  Really impressive.

The riding test covered about 100 km of motorway (freeway), city and twisty country riding, lasting for between 1.5 and 2 hours of solid concentration.  During each of the environments, the candidate is expected to give a continuous 10 minute commentary over the comms with respect to what he is seeing all around him, what he can't see but can infer and how both are impacting on his riding in terms of position, speed, gear and throttle sense.

In summary, he delivered the best running commentary of anyone I've ever seen at test level, picking up a driver on the motorway who was probably texting (confirmed moments later), drivers who were likely to manoeuvre without indicating and so on, leading to smooth, good progress in an utterly safe and courteous manner.  On the tight back roads, Cameron was in his element and all I can say is that I'm glad I was on a bike that really handled!  He was a joy to watch and made it look effortless.  He aced his advanced test and is the youngest motorcycle member of IAM NZ to do so.  He'll get even better as he trains as an Observer and it will be exciting to watch his progress.  Just goes to show that it's not inevitable that young people have questionable skills, even if I was one of the dodgy ones at that age.  It's all a question of society's expectations and I'm sorry to say that politically, NZ's expectations of the standards required to obtain a licence are not particularly demanding.  I must say that the required standard has increased a little in recent years though. 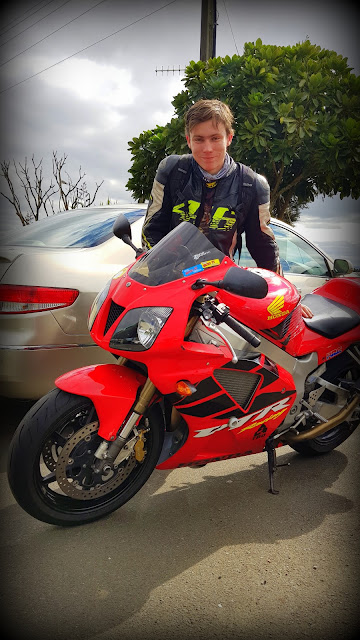 A delighted (relieved?) Cameron and his SP1

The rider I took out yesterday is a career firefighter for NZ Fire and Emergency.  We went through exactly the same process as Cameron and unsurprisingly, the end result was a good pass.  Riding an immaculate Suzuki GSX 1250 FA, Damian brought the same level of skill to the ride as he would in his career - professional, unflustered, unhurried.  The level of skill made it look easy, which it certainly wasn't. 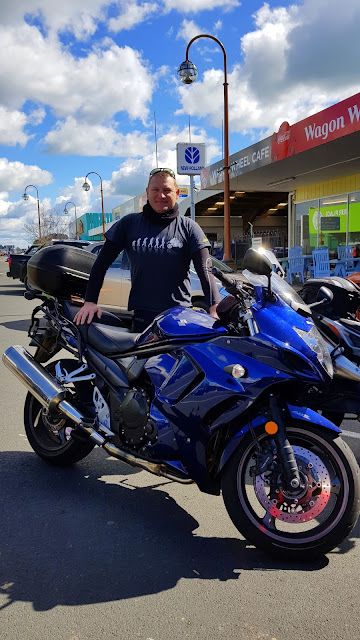 Damian and his immaculate GSX 1250 FA

Both candidates were modest and you wouldn't expect either of them to be loudly trumpeting their success.  As with any worthwhile accomplishment along these lines, the level of preparation required tends to generate a quiet inner satisfaction and pride rather than big-noting the achievement.

Apart from the pleasure I get from seeing the success of riders and drivers who want to continuously lift their game, it makes me keep my standards up too.  Turning 73 next month, it's probably getting close to the time I should be looking at retiring as an Examiner, although not necessarily altogether from riding.  Maybe I should be looking at a light adventure bike to explore all those dirt roads on the Coromandel Peninsula and get that nuisance Bandit Rider out of my ear, eh Andrew? :-)