Back in 2019, I published a post concerning snatchy brakes on the Duke 790.  They weren't lethal, but it was certainly very noticeable at low speeds.  A recommendation was made through the Duke 790 forum that I should break the glaze on the disc rotors, using wet and dry paper.  This worked reasonably well for a short while before reappearing.  Then Covid appeared worldwide, a NZ early lockdown in 2020 and further investigations took a back seat.  I fitted EBC HH pads during lockdown, principally because they had delivered great results on my 3 previous bikes.  With lockdown lifted, the EBC pads delivered much improved stopping power on the open road but little had changed at around 20 km/hr or below.  They were grabbing to the extent that it wasn't always possible to stop exactly where planned.  Something needed to be done.  I measured disc runout (or thickness variation) with a dial gauge to get objective information to present to my dealer, along with photos to show uneven marking on the disk where the pads had intermittent contact with the surface.  It coincided with the measured runout high and low points. This is shown below.  Further detail HERE .

The Service Manager and one of the technicians took the bike for some low speed braking tests and their description was relatively colourful to me, although I understand that in the formal report to KTM, the word "aggressive" was used as a more conventional description. 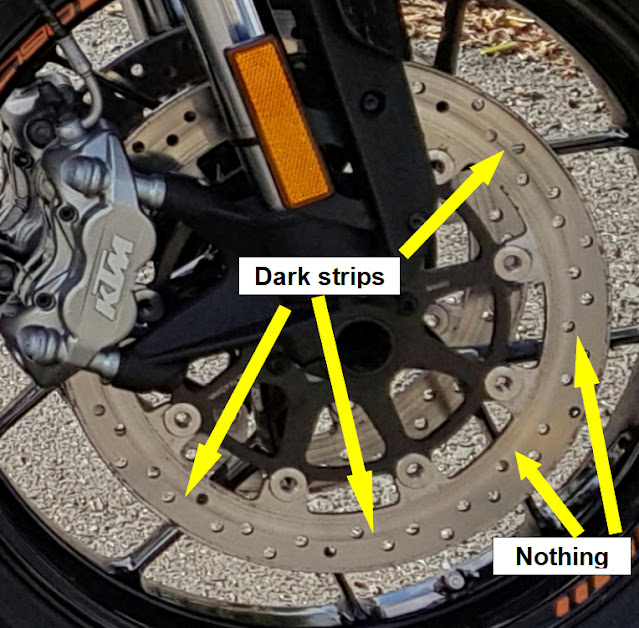 With all the evidence and the support of the dealer (Boyds of Hamilton), there was no issue with KTM agreeing that they would be replaced under warranty and a few days ago, I got a call that they were ready to be fitted.  A nice 340 km round trip yesterday to Hamilton to get them done. 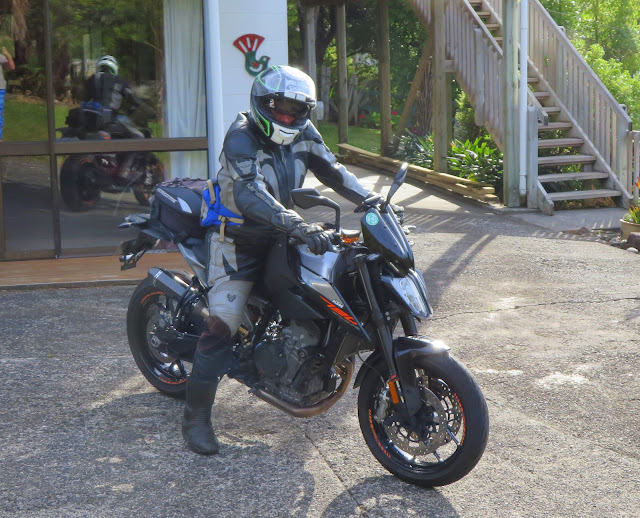 As a brief amusing interlude regarding the photo above taken by Jennie as I headed off, I wore the silver and black leathers made in 2003 AND THEY STILL FIT!  When they were brand new and I was kitting up for the very first outing, Jennie sauntered in to see what they looked like.  I uttered two words to her... "Chick Magnet".  Without pausing or altering her expression, she retorted "Until you take your helmet off".  Brought down to earth with a resounding thud, sigh.....

The new rotors took just 40 minutes to fit before the homeward journey.  The technician didn't test ride the bike, maybe with full confidence that the problem was solved. 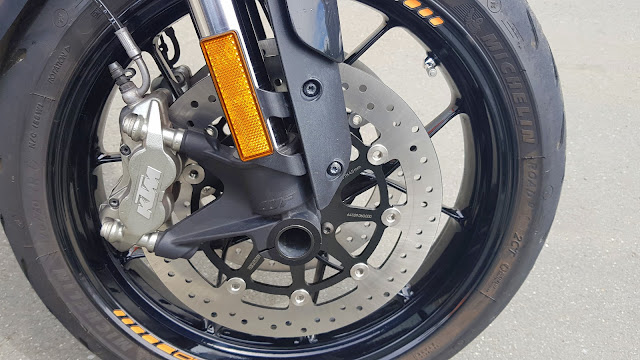 Brand new brakes aren't particularly effective so nosing out into city traffic, a longer stopping distance was judiciously applied.  However, it was obvious right from the start that there was no more "grabbing" at low speed.  The lever could be feathered lightly and slow speed control was spot-on -  Hallelujah!  Once out in the countryside, I was able to do a series of "stoppies" from open road speeds and was rather surprised how quickly the performance increased.  EBC HH pads really do the biz compared with the OEM ones.

On arriving home, the disc rotors were checked again.  The photo below suggests that there will be more bedding-in to come but importantly, the marks on the disc are absolutely consistent around the full 360 degrees compared with the first photo where there was a distinct lack of consistency. 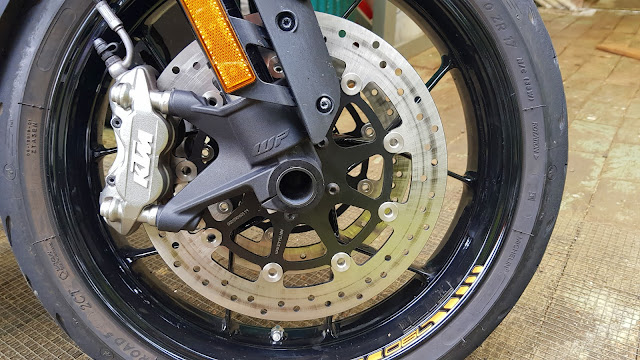 Although it would have been better to avoid the disc problem entirely, the whole business wasn't a difficult one to rectify with willing support from both the dealer and KTM.  I guess gathering solid evidence and being pleasant and constructive rather than ranting and raving helps the process along too.  Despite the "quirks" of owning a KTM, it hasn't dampened my enthusiasm for the brand at all.  The 790 is just so much fun to ride and completely fills what I was looking for in a bike this time around.  A friend thought that it was releasing the "inner hooligan" in me.  To coin a well-known line from a UK TV series, "You might think that, but I couldn't possibly comment"!

Around a month ago, I took a chance and ordered a "knock off" Chinese Akarapovic carbon end can through AliExpress.  The OEM muffler isn't a particularly eye-catching design feature and weighs nearly 4 kg.  Although I wouldn't have forked out for a genuine Akrapovic, shedding a bit of weight and improving the appearance at a substantially lower cost was an attractive prospect.  Any potential performance increase wasn't a selling point.  Because it wasn't a full exhaust system and retained the catalytic converter, the ECU could handle any small changes in fuelling without having to buy more electronic trickery such as a Power Commander.  Easy peasy!

It arrived a few days ago and is extremely well-made.  The kit consisted of the carbon can, a link pipe to connect the can to the catalytic converter, an angle bracket and bolt, two sets of retaining springs and some adhesive-backed glass fibre tape.  There were no installation instructions.   Removing the OEM system and installing the new can and link pipe took about 90 minutes, being cautious to get everything spot on in terms of alignment. 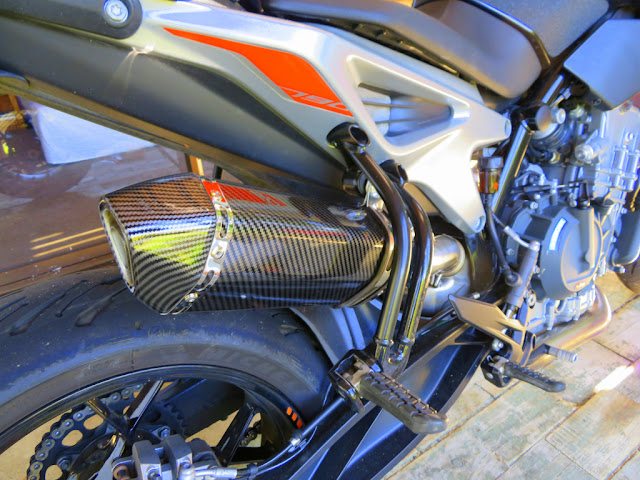 Much less obtrusive than the OEM muffler
There were only a couple of head-scratching moments.  The can was a sliding fit on the link pipe and I guessed that the adhesive-backed glass fibre tape was to form an exhaust gas seal when applied to the pipe where it goes inside the muffler.  The other puzzle was why two sets of retaining springs were supplied as one set was ridiculously short.  The longer set had a really strong tension and I had visions of them pinging off into a dark corner of the workshop if I used pliers or similar.  I actually used a bit of thin rope as a windlass and that worked just fine to get them in place.  The extra bolt and bracket in the kit weren't needed. 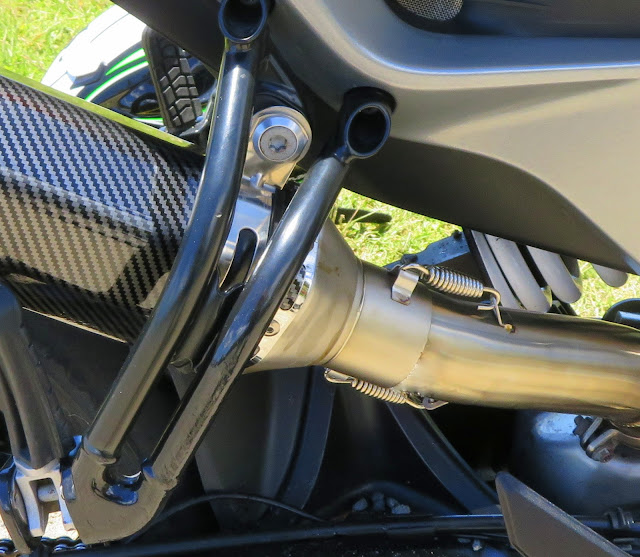 Retaining springs that would lift a main battle tank! 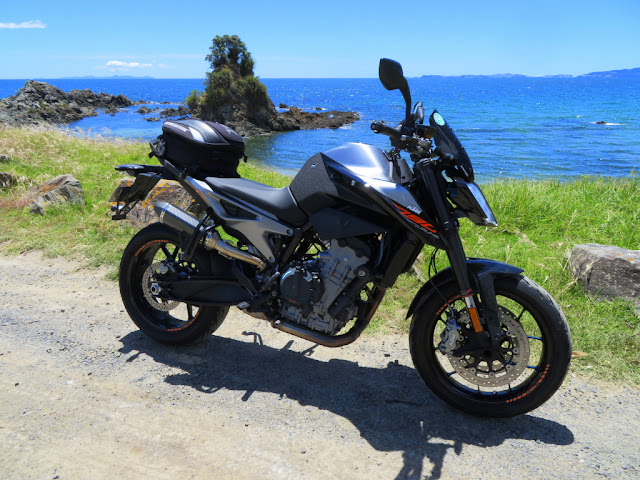 The first trial run
After fitting, it was time to do an 80 km round trip to test it out.  Exhaust note with the removable baffle in situ was similar to the OEM system which was just fine.  The only thing which differed was a lack of popping on a trailing throttle, which is a characteristic of the standard system.  No discernible difference in performance.  Upon returning home, an inspection showed that the glass fibre tape had moved slightly with the heat and exhaust gas was leaking slightly in one small place at the joint.  It's very small indeed and I may use a proper exhaust sealant to fix it at some stage.
In summary, it looks good and the exhaust note won't draw unwanted attention from the authorities.  It's also saved a few kg - great result and excellent value for money.  We'll see how it performs in the longer term but certainly no regrets in taking the risk to buy one.
Posted by Geoff James at 12:26