Not quite a waste of two weeks!

Spring has sprung in NZ, lots of sunshine, temperatures in the mid-20's C and as the saying goes, a young man's thoughts turn to love. For ummm... more "mature" gentlemen such as me, such thoughts are not entirely consigned to history but the beautiful weather also promotes thoughts about motorcycle riding and taking the boat out with Jennie to go fishing.  The last outing 3 weeks ago ended up with her having bragging rights (again) for catching more than me but at least I get to share in the bounty, even though less than subtle mickey-taking has to be endured. 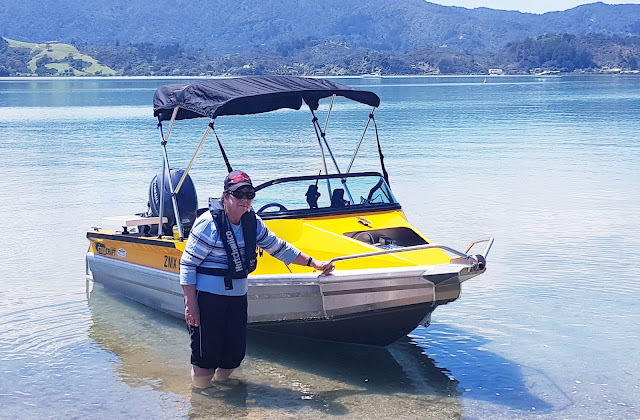 Thankfully keeping the smug grin off her face
After fishing, the plan was to get in plenty of riding but that turned to custard big time. There's an area of our garden that's a bit of a jungle.  It's on a slope and the clay soil can be extremely slippery .  We got stuck in and cut back masses of foliage.  The next stage was to get one of the many local tradespeople in to build about 10 metres of steps in the sloping area to make it safer and more accessible, and then replant it with all sorts of sub-tropical shrubbery.
Now I don't know how the rest of the world goes about getting hold of a tradesperson but in our area, it's bloody nigh-on impossible, despite their numerous advertisements in the local newspaper and community website.  This is how it goes on the phone.  Me:  Hi, are you interested in building me a 10 metre run of steps in our garden?  Tradie:  Yep, a bit busy right now but how about I pop round in a couple of days to see what's involved?  Me:  Fantastic, see you then.   You probably know what's coming next, don't you?  A complete no-show, repeated multiple times.  Lots of rude words said.
In fairness, the tradies round this way have excellent trade skills but their customer relationship building is shit (a technical term).  Their liaison skills are sadly lacking, probably because they have so much work that they've never had to get their act together.  We desperately wanted to get the job done to tidy up the place before Christmas so the only alternative was to forego all the fun stuff and do it myself.  I've never built steps before and terrain angle changes were an additional complication.  However, I'm good at maths and some calculations aided by building guides on an NZ website (Thanks, Mitre 10) saw me make a start on the project. 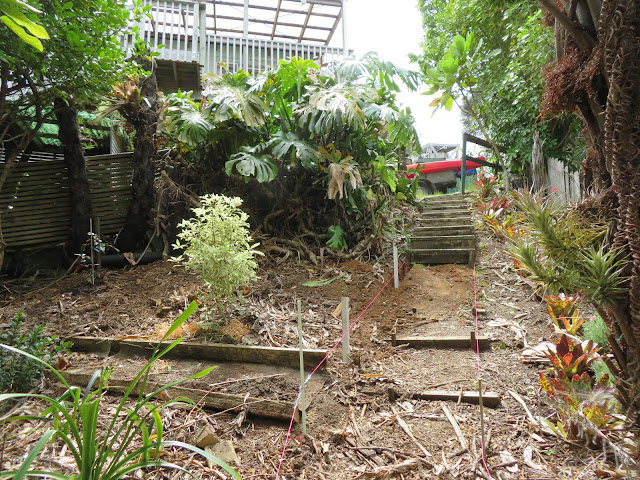 Area cleared of shrubbery and string lines laid out
I should add at this point that humping heavy lengths of timber around in hot conditions isn't kind to a 73 year old body.  Every evening saw me sprawled on the couch watching TV or more accurately, drifting in and out of conciousness and completely missing what was being shown on the goggle-box.  The other problem was mosquitoes.  It's not normally an issue but in that area, they were really keen to make life a misery.  I swear that the first repellent found in the bathroom cupboard was an attractant and it did no good at all.  Another brand was discovered after several days and I must say that it worked well.  Lord knows what it does to the human body though as it smelt like effluent from a chemical plant.
Lots of careful measuring and the use of string lines and a builder's level saw the steps starting to take shape and the result was rather pleasing. 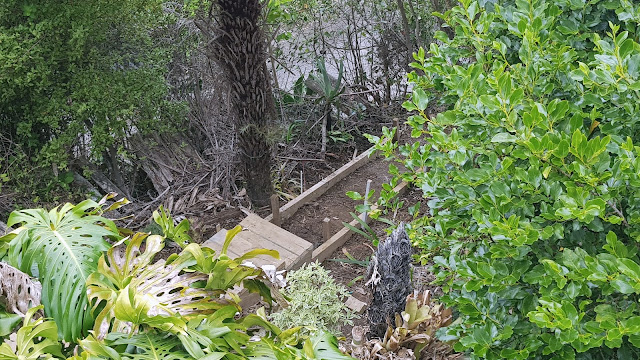 Emerging from the undergrowth 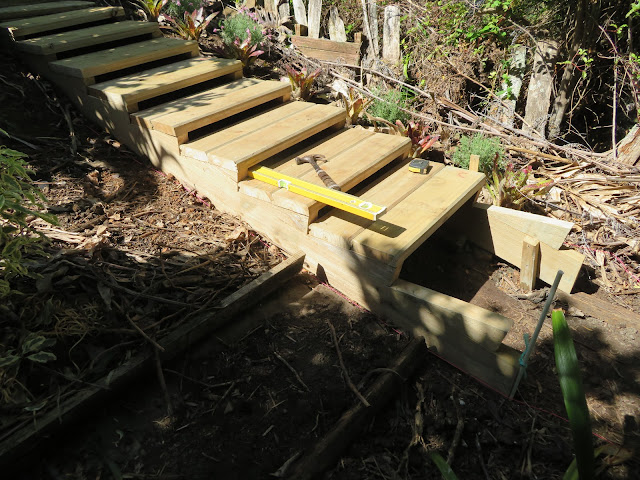 Not bad if I do say so!
Fatigue put a dent in my organisational skills on a daily basis.  Lost count of the number of times that a critical tool or even a humble pencil was at the top of the steps when it was needed at the bottom or vice versa.  The percentage of time traversing the steps as opposed to doing something productive wouldn't have looked good if it had been charted, especially as productivity improvement is how I earned a crust for many years, sigh....  After getting into the swing of things and fixing the bearers in place, I could reckon on about an hour per step, what with all the measuring, cutting and nailing in place.  There were LOTS of steps - paid not to think about them.
I did have a supervisor for much of the time though - Sam, our rescue cat.  Every day, he was there squeaking encouragement or more likely telling me to pull finger.  He also enjoyed chasing the local lizard population when I disturbed them from under fallen leaves. 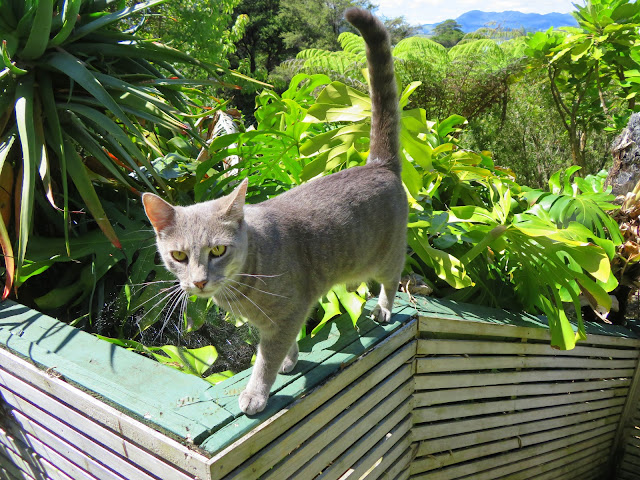 Sam, the civil engineering supervisor.  Not looking happy with the lack of progress
Every time there was a change in the slope or slight change in direction to miss treasured tree ferns, it meant more geometry to ensure that the steps remained horizontal.  I'm sure that tradies don't do it this way but it seemed to work ok for me. 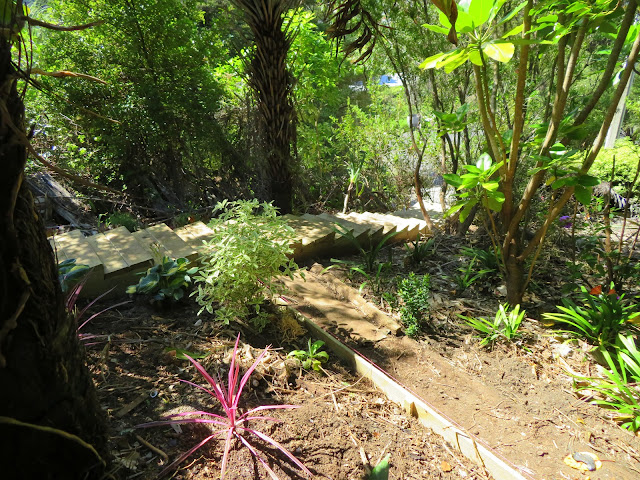 Steps, steps and even more steps, plus the beginnings of a path 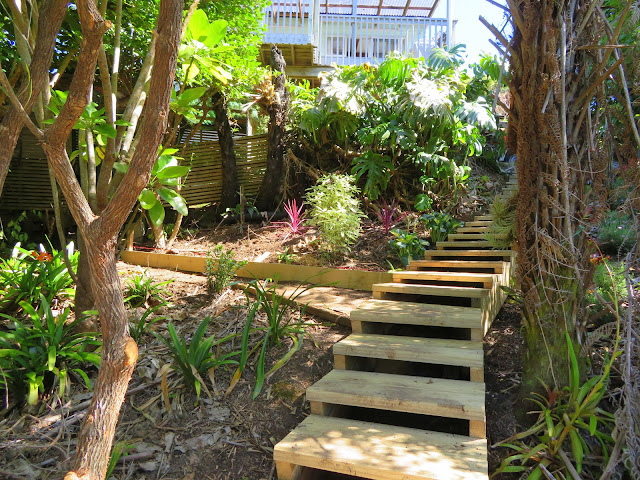 Starting to look quite professional
Finished the job two days ago and was agreeably surprised at how good the steps look.  There's still a path among the greenery to put in but we haven't yet decided whether it's going to be pre-cast slabs, natural stone or gravel.  No great urgency to make a decision on that.  Next step is to fill the cleared areas with exotic plants before the heat and drier weather really sets in.  We've already planted two bright pink hybridised versions of the NZ Cabbage Tree, Cordyline Australis; as per the photo below.  They should look great as they grow. 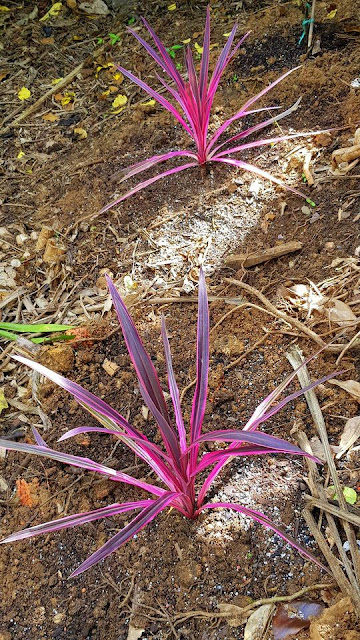 Cordyline Australis  Pink Passion
Part of the "jungle" now reclaimed as a shade garden and planted with bromeliads, hosta and other stuff, plus a good layer of bark mulch.  Should look good in a couple of years. 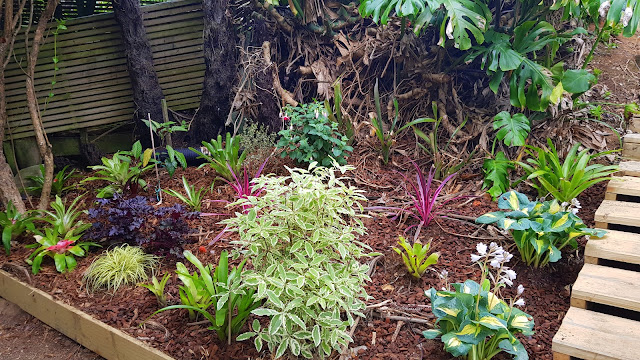 Looking a lot better than it previously did!
As the title of the post says, not quite a waste of two weeks but there are things which would have given a lot more pleasure.  However, the end result was satisfying and it did save on labour costs.  Not sure that I'd be keen to repeat the exercise though.
A final bit about motorcycling....
I took a half day break just before project completion to have a haircut.  The cut doesn't take that long you understand but I get it cut in a neighbouring town with 50 km of dream twisty motorcycling coast road in between.  Having not ridden for over 3 weeks, it was a traffic-free relaxed, chilled ride in both directions, or so I thought until noticing the back tyre. 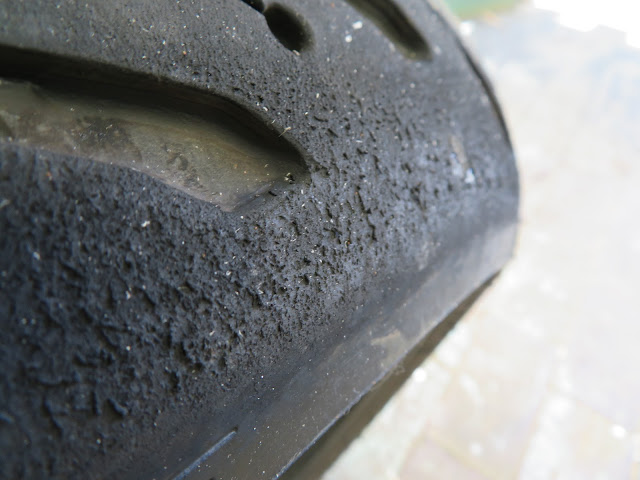 Oops!  Michelin Road 5 put to good use
I'm sure that everyone who's ridden a motorcycle has set out to have a brisk ride and has ended up riding like a completely uncoordinated muppet.  Then there are the occasions when the rider is relaxed and has an absolute blinder without putting in any apparent effort.  This ride was in the latter category.  It's all in the top 3 inches!
Posted by Geoff James at 14:10