A number of motobloggers, me included; have made recent posts with some degree of philosophising about life in general, thanks to the nightmare of 2020.  Call it a mental recalibration about priorities, if you like.  I've certainly been thinking about "where to from here" more than usual, probably because I'm 74 this year.

Learning new skills is always uplifting, no matter what the subject matter.  Sometimes it's a matter of necessity, sometimes just for fun.  I've long wanted to go back to uni to attend U3A (University of the 3rd Age) lectures for senior citizens in philosophy, archaeology or similar; simply out of interest in doing something different.  My last formal academic stint was a postgrad diploma in quality assurance systems back in 1990 which was necessary for a major company project but bloody hell, it was terminally boring!  Unfortunately, where we live now involves a 4 hour round trip to the nearest university campus to attend U3A courses so attendance would be a real hassle.  On-line courses just aren't the same.  Back to the drawing board for something new and enjoyable then....

Regular readers will have seen the previous post which included a bit of garden landscaping whilst lockdown and its aftermath was in full swing.  Construction of a flight of steps and a decently-formed path through part of the garden was really enjoyable and also showed that with a modest number of woodworking tools, it was possible to get pretty good results with a bit of thought and planning.  Our eldest son thought he could leverage the newly-acquired skills and enthusiasm to his advantage and asked me to build a 1600mm x 1100mm substantial gate between the garage and fence at his house.  He's flat out with a young family so it would be good to help him out.

Having never built a gate before, the wondrous YouTube was consulted and there was a great "how to" video by local hardware chain Mitre 10. Some of the rebating involved the use of a dropsaw which I don't have.  However, careful use of my circular saw and a razor sharp chisel was a great substitute once I'd got the idea.  Didn't have big sash clamps either but a pair of vehicle ratchet tie downs were a perfect substitute - yayy!!! 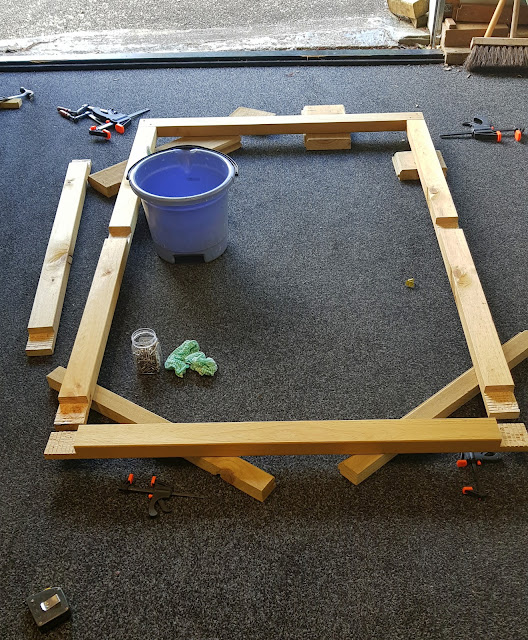 Getting the frame square
Next step involved getting the angle-brace installed which was the trickiest part of the entire construction.  Each end had to be precisely cut into opposing corners, with a rebate in the centre for connecting to the centre brace.  Again, great learning watching the carpenter on the video on how to mark it up before cutting. 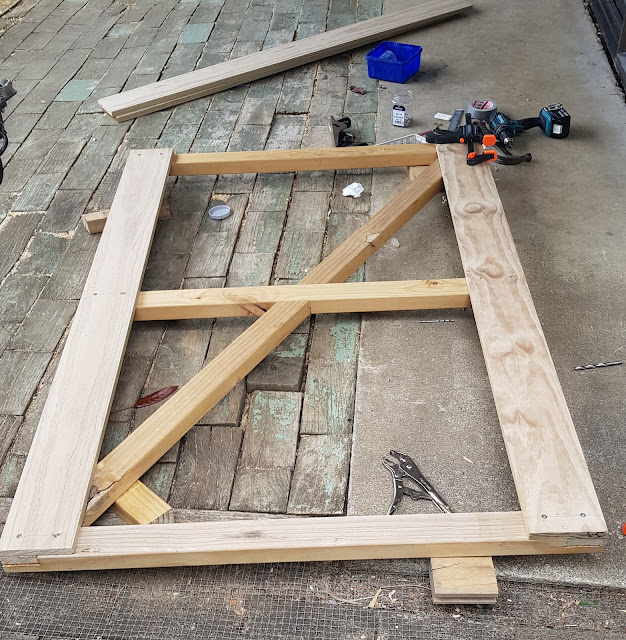 Adding the vertical facing boards
Cutting the facing boards and screwing them in place was a piece of cake apart from my mental math quantity calcs letting me down and having to return to the woodyard to get an extra length of board, sigh......
A bit of filler in the screw holes and it was time for priming and painting - here's the finished article, minus the hinges which were on order at the time.  Crikey, heavy duty stainless steel 125mm broad butt hinges are expensive - nearly NZ$90 for 3 of them (US64, 46GBP). 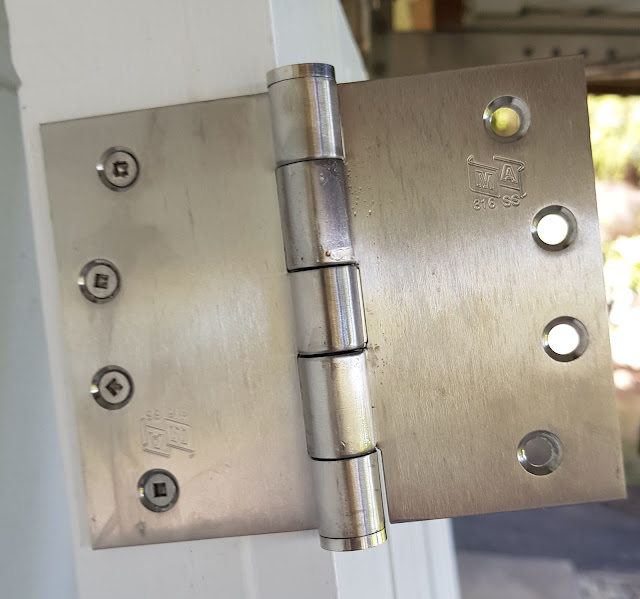 Just about worth their weight in gold.... 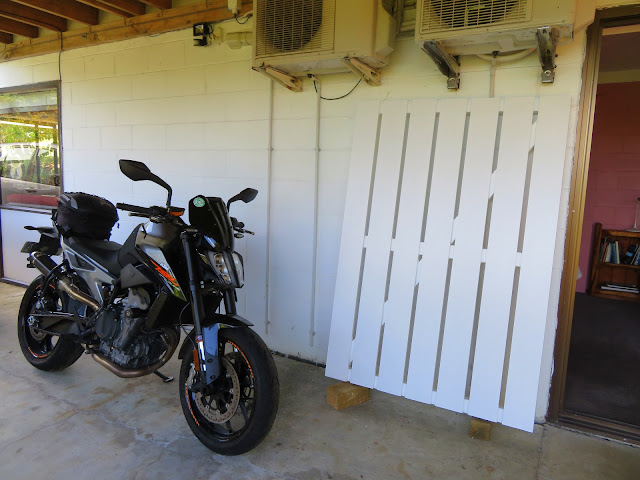 The finished article minus hinges
All that remains is to trailer it to the city of Hamilton and install it with a decent latch.  A very satisfying first-time project, particularly in learning new techniques which are transferrable to future projects.
I also managed to fit in a very pleasant 450 km day on the KTM taking a serving police officer out for his Advanced Roadcraft Test.  Andy is a member of the Commercial Vehicle Safety Team, ensuring that road transport operators meet their legal obligations.  He just rides for fun as well as being an ex-road racer and active trials rider.  Theory test first which he aced 100% - 80% is required to pass.  Then it was out onto the road to assess his riding in motorway, city and country road environments; with him giving commentary about what he was observing and how that was impacting on his riding.  It was a close to flawless ride in surprisingly challenging conditions with high temperatures and a fair bit of tar bleed-through.  The latter called for a fair degree of vigilance on narrow, winding country roads.  Both of us thoroughly enjoyed the day and returned home in a fairly knackered state.  Good hydration and a mesh armoured jacket made it more pleasant than it would have otherwise been. 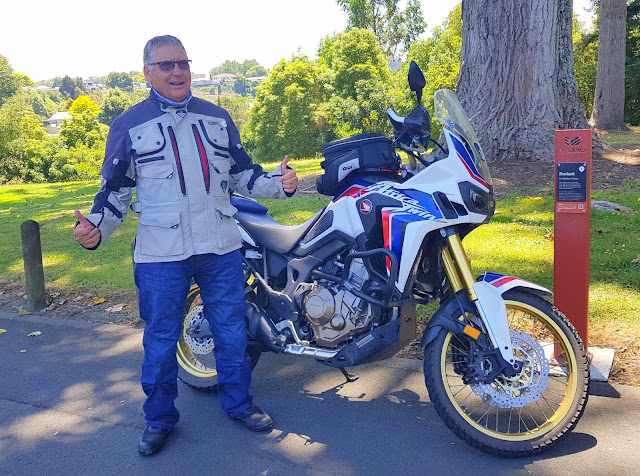 A delighted Officer Andy and his immaculate Africa Twin
Whilst being an IAM Examiner is really enjoyable on days like this, it's rather less fun on cold, wet days.  Part of the problem is that I live a long way from where most tests need to be conducted so it makes for a lengthy day in less than pleasant conditions.  As a nod to my age and a whole load of post-Covid mulling things over, I'll be retiring from an active IAM role at the end of the year but still plan to occasionally ride socially with them to maintain skills.  As mentioned earlier, it's quite a healthy thing to take on new challenges and learn new stuff!
Posted by Geoff James at 15:19