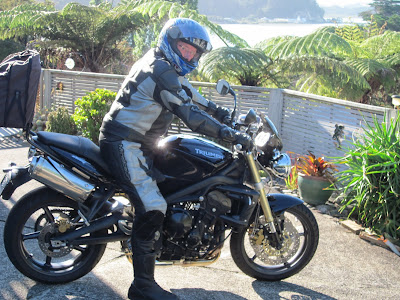 Off on another mission.....
My good mate Roger Fleming  (Raftnn) and I both set out to raise our riding skills this year .  We chose slightly different tuition routes, principally because having retired and wanting to put something back into the local motorcycling community, I'm undertaking formal training to become a voluntary advanced instructor (an Observer in Institute of Advanced Motoring terminology).  However, the techniques themselves are pretty much identical.

Roger has recently written an excellent review of his progress and thoughts so far (HERE) and I thought it would be useful to do the same both from a personal viewpoint and from the structured process which the IAM uses.  This approach to riding more proficiently is a strictly personal one and hopefully,  I'll avoid sounding too much like a boy scout or showing too much missionary zeal.

A quick and dirty summary of the method of training
The IAM train to a very high standard and it's used by professionals such as police riders and drivers.  They use a system called IPSGA  and without going into fine detail, here's the basics of each stage.

Information.  Continuously knowing what's happening in front, behind and to the sides of you.  This means taking in what's happening, using that information to plan what you're going to do next and giving information out to other road users (signals or any other appropriate form of communication).

Position.  Putting yourself in the best possible position on the road to deal with hazards or any other events either seen or anticipated. (e.g. preparing for an overtake, positioning for a blind bend etc)

Speed.  Adjusting your speed for an impending hazard, accounting for visibility, road surface, cornering, actions of other road users, the possibility of unseen hazards etc

Gear.  For example, are you in the right gear  for good control such as engine braking in slippery conditions, or in the correct gear to allow a rapid overtake when a safe opportunity presents itself?

Acceleration.  Using the throttle to maintain appropriate progress through bends, accelerating smoothly away to regain the normal road speed under the prevailing conditions.

Each stage is dependent on the one before.  If road conditions/events change, new information needs to be considered and you re-enter the system at an appropriate phase, continuing in sequence. At first reading, it all sounds very formal and a bit anal but it's very easy to apply with a bit of practice.  The system must be flexible in response to actual road conditions.  During observed rides, the examiner has a detailed checklist applicable to these stages so that you are assessed against them in considerable detail.  At the end of the ride, the examiner will discuss your performance against the criteria and what aspects if any, you need to work on before the next stage.

That's all the description of the process I'm going to give at present; it's simply setting the scene for reflecting on how it's all been going so far.  The two posts previously made about the observed rides I've done so far are more to do with what happened rather than how I felt, so now it's time to share the latter bit; tough as it is for a guy!

Mind Games!
All the stages of IPSGA are well-covered in the two IAM-recommended books HERE and HERE.  Because observed rides were already scheduled, I  read them exam-cramming style rather than at a leisurely pace. The reading was followed up shortly afterwards with practice rides, trying to implement all I'd read.  HUGE MISTAKE! Doing it that way simply put me into overload.  I wasn't enjoying the rides and made too many mistakes.  On subsequent rides, I stuck to doing one or two things well until they became habitual, then a few more and and so on.

At the outset, fear of the unknown was a bit overwhelming - not knowing how I was going to be assessed, what the examiners would be like, road and weather conditions and so on.  All of them contributed to some stomach-churning moments. After the first check ride and having got through it with just a few improvement recommendations rather than a massive across the board fail, it was possible to relax; at least from fear of the unknown.

What hasn't gone away is the pressure from fear of failure although it has eased a little as I pass each stage. That fear isn't because of what others might say or think, it's simply an internal compulsion to do well.  Can't honestly say what causes it but ever since school it's been the same where something challenging is involved. Nature vs. nurture? Not a clue, but although it's not as bad as maybe a couple of decades ago, it's still present to some extent.  You need a bit of pressure to perform well but it could be quite easy to let it get out of hand.  I'd be interested in other's views on this aspect.

Where are the big improvements to date?
Summing it up simply, riding consistently well for much longer periods than in earlier times.  I'd previously ride well in bursts but concentration would lapse at certain times due to external or mental distractions, perhaps a bit laziness thrown in too.  I'm not there yet, but the IPSGA system of riding really aids concentration.  Initially, it soaked up all my riding time thinking about it but with practice, it allows you to ride well almost automatically whilst an area of the brain is still free for other stuff and most importantly; enjoying the ride!  For example, in touring mode, there's time to take in the countryside whilst the IPSGA tools are working for you on another level.  I think that's what advanced riding is all about - self-awareness and safe riding to a high standard all of the time.  In a recent post on a practice ride, I mentioned that for the remaining 80-odd km home, I cut loose and ummm.... pressed on a bit!  Although speeds in the twisties were higher than normal, I felt perfectly at ease because the techniques recently learned were still governing the way I rode.  Does that make sense?  Maybe not very well explained, but hope you get the gist.

In terms of one specific improvement, one definite area is being far more aware of what's going on behind me.  Having had bikes with serious performance for the last couple of decades, you don't get passed all that often and there's a tendency to direct your focus forward at the expense of what's going on behind.  A silly thing to do given that circumstances can change so quickly.  My use of mirrors in combination with shoulder checks/lifesavers into the blind spots has improved out of sight compared with a few months ago.

These are just a few random thoughts which have come up on the journey so far.  They aren't a comprehensive sum of what I've learned which has been immense and will hopefully continue.  In fact, it's the continuous improvement aspect of IAM training which I really like - it stops back-sliding!  In addition, it's also reinforcing the big difference between an experienced rider and an advanced rider.

More to come, but most importantly, I'm loving the experience (now)! 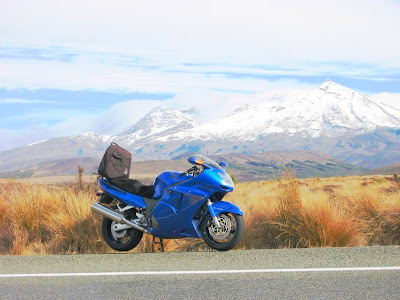 My Blackbird with active volcanoes in the background
Posted by Geoff James at 16:57