The next 2 posts are principally to irritate Sonja as she is always complaining that her boss won't send her back to NZ on business and seeing photos of NZ always stirs her up!

It's a crappy winter day and not that pleasant for riding so I've been flicking back through photos of sunny riding days to cheer myself up.  Back in 2009, I made a post about our last south island riding trip but didn't attach many photos. We called it the "Birds Galore" tour as 4 of us with identically-coloured Honda Blackbirds headed down south.  Jennie wanted to come too, but not spend days on the pillion of 4 lunatics who were down there to misbehave on some of the world's greatest riding roads.  Her dilemma was solved when the partner of one of the other riders wanted to come as well and offered to bring their people-mover.  A perfect arrangement as we could chuck our gear in the back and the girls could do their thing whilst we did ours, meeting up at lunchtimes and late afternoons en route.  Here's some more photos and scribblings from that tour. Click on the photos to enlarge. 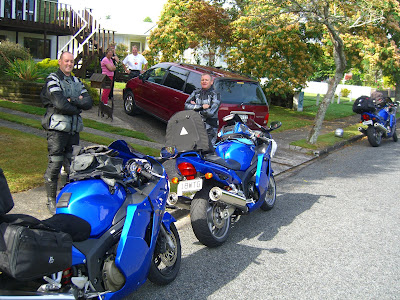 Leaving home for the great adventure
From L: Martin (a cop!), Jennie and me in background, Dave 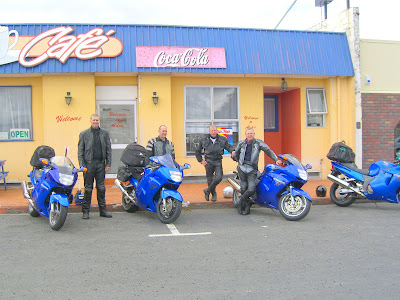 En route to the ferry
Big John, Martin, me, Dave


On the way to the ferry at Wellington, we passed through the small town of Taihape.  Every year, the town puts on a gumboot throwing contest (how far you can throw it) with great prizes and the whole town has  a carnival atmosphere.  Fittingly, at the entrance to town, there's a giant gumboot crafted from old corrugated roofing iron! 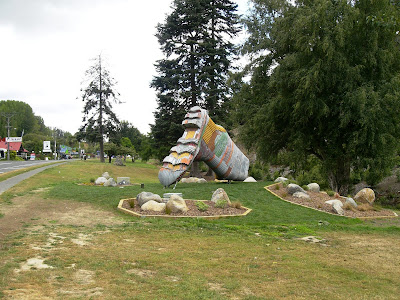 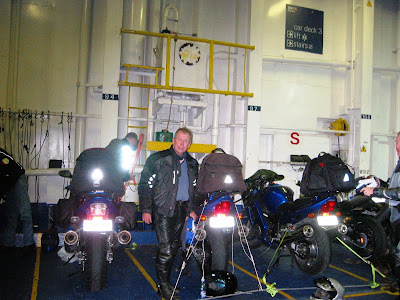 Tying down on the ferry 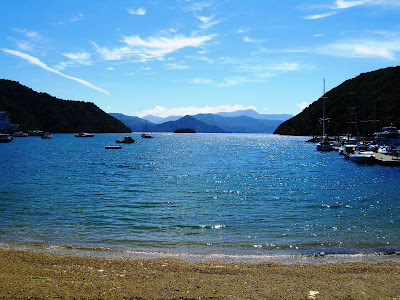 Picton in the south island where the ferry docks 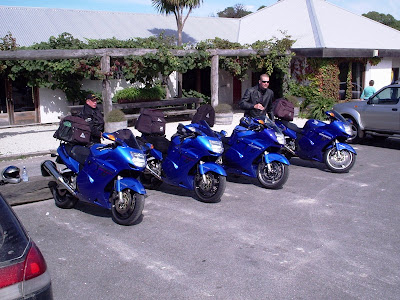 Kekerengu - stopping for a cold drink 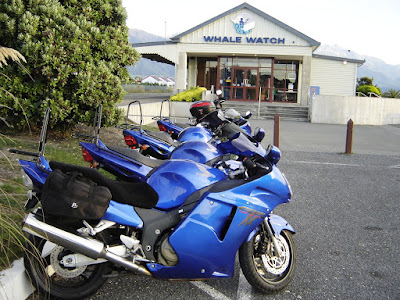 The sperm whales at Kaikoura hunt giant squid in a deep trench just off the coast.  They re-surface every 30 minutes or so to re-oxygenate and stay on the surface for 10-15 minutes, so the chances of seeing several on the 2 hour trip are very good.  There are also hundreds of dolphins and seals in the area. 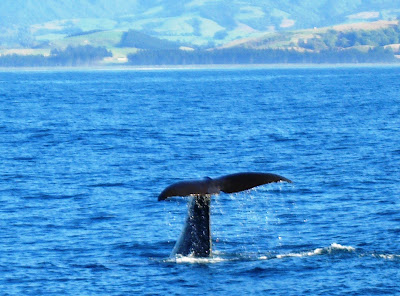 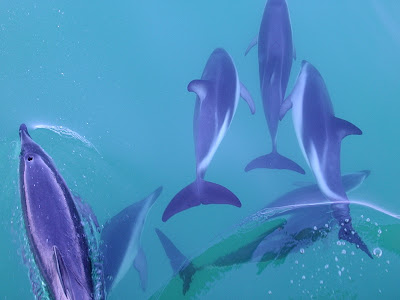 There must have been at least 200 dolphins round the boat
leaping out  of the water and splashing us with their tails!
The photo below is of the iconic hotel at the tiny community of Blackball, an ex-coalmining area.  It's a bit down at heel but is one of those places which is a "must" to stay at because of the magic hospitality.  Full of old mining memorabilia, food to die for and beer from a local micro-brewery.  Now here's the even better bit!  A good few years back, the owners called it the Blackball Hilton.  Eventually, the Hilton hotel chain heard about it and told them they'd have to change the name if they didn't want their arse sued off for damages. You can just see the name board nailed to the railings on the balcony.  In a gesture of defiance, the owners did change the name!  See a little board nailed on an angle just above the other sign?  It has the word "Formerly" painted on it!  The full name was changed to "Formerly the Blackball Hilton".  The Hilton hotel chain gave up for fear of becoming a laughing stock.  Yayyyy for the little guy!!! 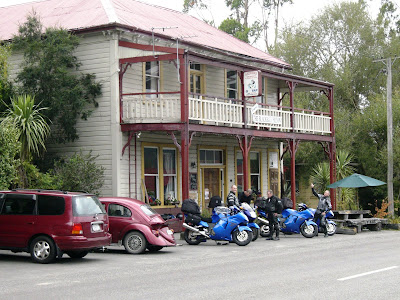 The Blackball Hilton
The  south island has a number of mountain passes, all of which are a biker's wet dream!  They all run through different scenery so each one has a unique character.  The trick is not to crash whilst dribbling at the scenery. Fortunately, there's minimal traffic outside the main cities which is perfect for bikes. 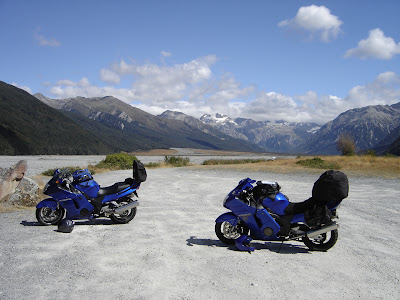 
The birds below are Kea, a native parrot with beautiful plumage.  Most people just call them bastards.  They're really inquisitive and mischievous.  They'll pull the rubber out of a car wiper blade holder, peck holes in your saddle, get inside your pack to steal food - don't ever leave anything unattended! 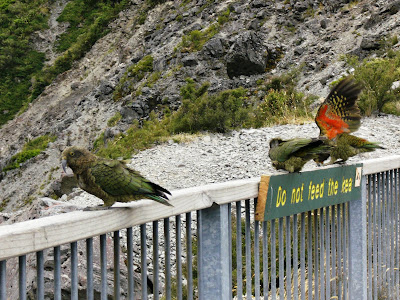 The entertaining, but delinquent Keas


The photo below shows the longest straight in Arthur's Pass. Four Blackbirds had their throttles pinned to the stop down here. (No wives or partners around to wag their collective fingers) 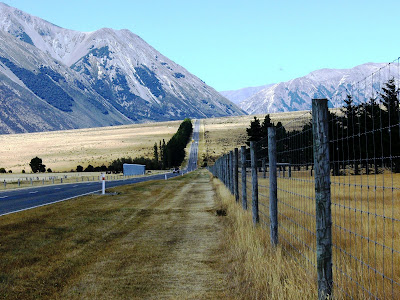 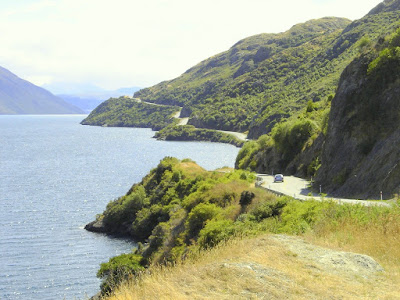 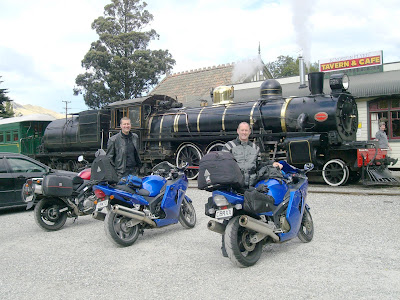 John and Martin by the Kingston Flyer 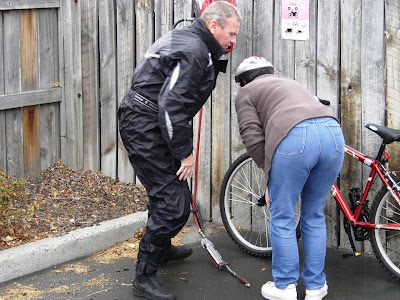 Dave helping a lady at a gas station fix a puncture
- seems more interested in her butt!

The following photo was taken at Cardrona between Queenstown and Wanaka, a ski area in winter but devoid of snow in summer.  It used to be the venue for the Race to the Sky, the NZ equivalent of the Pike's Peak Hill climb.  There are some terrific videos on YouTube - you must see this one: Top Gear 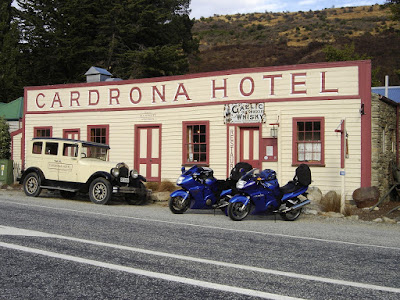