How to spend the 1st day of Winter!

Crikey - it's only 3 weeks to the shortest day of the year - where did the time go??

I meant to go for a long ride the previous day but just as I was getting the kit out, the heavens opened so gave up and stuck some new plants in the garden - at least they'll be well-watered in!  Yesterday, the first day of winter; was an entirely different proposition with sun and warm temperatures so it was out of the door straight after a late breakfast. The plan was to head to South Auckland via the back roads to put into practice all the recent learnings for my advanced riding qualification with Institute of Advanced Motorists.  Got another official check ride shortly so badly need the practice! 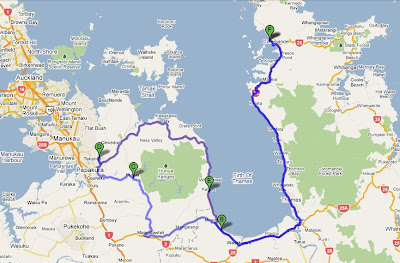 A 315 km loop made in heaven
The last 2 rides to hammer in the advanced techniques didn't start well possibly because I was trying too hard but this time was completely different - relaxed right from the start.  Job to say why -  more confident definitely, beautiful day helping the attitude most certainly.  Also, a recent quotation by fellow blogger Dan Bateman was swirling around in my head.  He said "Amateurs practice until they get it right. Professionals practice until they can't get it wrong".  Dan, you have no idea what a resonance that's had.  I'm trying very hard to fall into the latter category - I owe you big time!  Anyway, all the things combined to give the right head space which goes to show just how important the correct mental approach is.

With some rides, you just want to keep riding and not take any photos.  Today was the opposite.  Any nice sights encountered, it was no effort to pull over and whip out the camera.  Absolutely no idea why it works out one way or the other!  A quick stop on the Coromandel-Thames coast road at the highest lookout to take photos of Manaia Harbour and down a valley to a farm right on the edge of the Firth of Thames.  Lucky buggers - they even have their own private boat launching ramp! 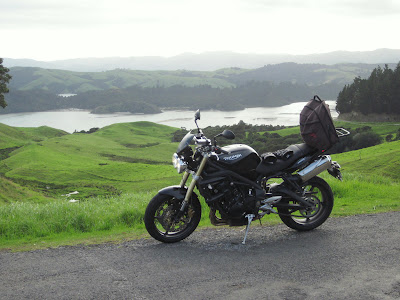 Manaia Harbour as a backdrop
Moved the bike all of 10 metres to take this next shot down to the farm from the lookout: 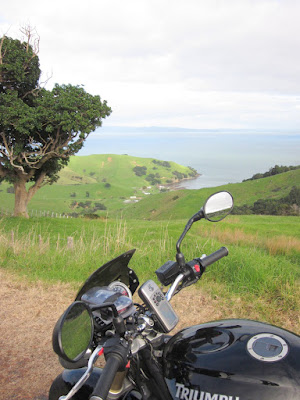 Farm by the Firth of Thames
One of the great things about riding on a weekday in our area outside the summer months is the virtual absence of traffic - simply wonderful.  In the 50-odd kilometres between Coromandel and Thames, I would have passed less than 10 vehicles.  The 15 minute ride along the southern edge of the Firth of Thames is the only straight(ish) bit of road in the whole journey, which is nothing in the scheme of things.  Turning up the western side of the Firth, I wished I had some swimming shorts with me as the ride took me past the Miranda Hot Pools. 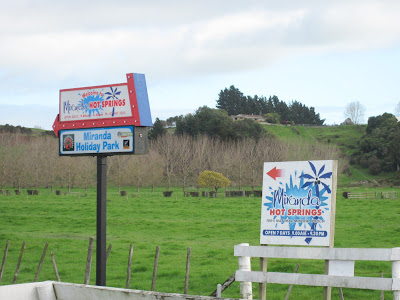 Entrance to the Miranda Hot Pools
New Zealand sits on the convergence of two tectonic plates, hence the active volcanoes and sadly, occasional earthquakes, although the recent Christchurch tragedy was both an extreme and rare example.  One rather more pleasant side-effect is hot springs which come up in all sorts of places. An unwelcome one a few years back was the one which unexpectedly came up in a senior citizen's house in a Rotorua retirement village, but I digress!  The Miranda hot springs consist of an open air  football field-sized pool of nice hot water with truck inner tubes and similar items which you can use as sort of floating arm chairs whilst you gently cook in the water - real decadence.  Any time is a good time to do this but it's especially wonderful on a starlit night.
About 20 km further on from Miranda, the old twisty state highway 2 has been bypassed with a new dual carriageway and the old highway has been left for  local residents to use, plus all the motorcyclists who know about it - more magic riding in non-existent traffic conditions.  The only sad thing is that a small community (Mangatawhiri) was bypassed in the process and the gas station and handful of shops have closed.  Pity about the Mangatawhiri cafe (affectionately known as the Castle) as they did huge, inexpensive ice creams. 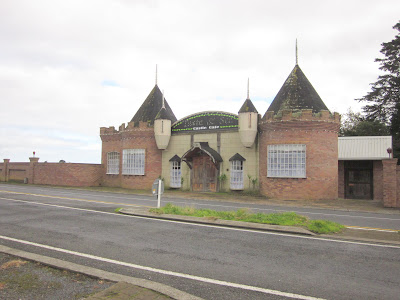 Abandoned cafe - vehicles now a rarity on this road
Turning north towards the Hunua ranges and Auckland, I spotted 2 bikes in the distance heading in the same direction.  Slowly closing on them, they turned out to be a woman (I'm pretty sure anyway) on a green Street Triple and a guy in front on a black Speed Triple.  There was a time when I'd have been busting to get past and clear off but it was a real pleasure to just hook on the back and watch them attack the bends - really nice skills.  Alarming signs of maturity showing up in my riding, especially on the hooligan Street Triple!!!
On reaching Papakura, one of the southern suburbs of Auckland; a bit of time was spent cruising in fairly busy town traffic, simply to practice good habits as there isn't much serious traffic where I live.  Even got to practice riding on really rough sections of dirt and rocks as it seemed like half the roads in the area had been dug up to lay new drainage systems.  Had visions of going down in an embarrassing heap in front the cars following me but all was well.............just!
Lunch was at the cafe at Ardmore airfield which I've mentioned in a previous post.  It's home to several flying schools, various light aircraft maintenance facilities and the NZ Warbirds - always something interesting going on.  The cafe has a verandah where you can sit out in the sun and watch all the comings and goings.  It seems quite bizarre, but light aircraft can taxi right up to the front of the cafe, jump out for a snack and then continue on with whatever they were doing!  Have a look at this photo: 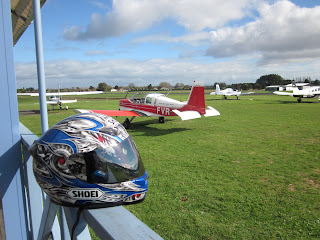 Pilot in the cafe having lunch!
Sitting in the sun enjoying a mushroom quiche and a cup of coffee, I was entertained by a trainee (presumably) helicopter pilot getting in some manoeuvring practice less than 1 metre off the deck following the edges of the taxiways.  It did occur to me that if he got it wrong, it could well be somersaulting in my direction through parked aircraft spraying avgas everywhere so was quite prepared to make a rapid exit if required. However, he flew with great precision and the tight turns were really impressive. 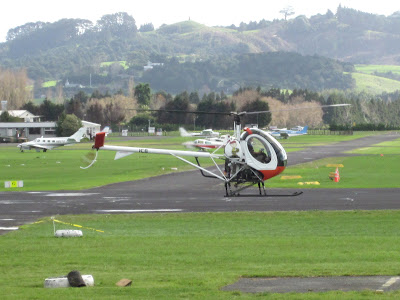 Lunchtime entertainment
After lunch, it was time to kit up and ride down to the Warbirds hangars to see what was going on.  Noticed an immaculate Ferrari parked at the flying school right next door and as I rode past, saw that the numberplate said AV8TOR.  There's obviously a dollar or two to be made in flying!
At the only open Warbirds hangar, I noticed a P 51 Mustang undergoing maintenance, with a Cessna Bird Dog and a T28 Trojan flanking it.  I was going to be cheeky and ask if I could photograph the Triple alongside the Mustang but my nerve failed me.  Maybe next time as the Warbird people are normally very accommodating. 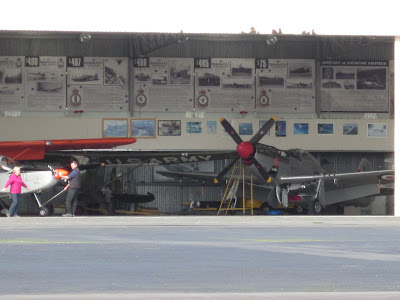 P51 undergoing maintenance
After a thoroughly enjoyable mooch around, it was time to head home via the coastal route.  Had to exercise a bit of care in the twisties just south of Clevedon as the road doesn't get much sun due to overhanging foliage and the road surface had a distinctly green tinge in places.  Gravel rash on both me and the Triumph would not be a good look on a ride to practice new skills!


At the coastal village of Kawakawa Bay, a quick stop by the launching ramp was made.  The sign in the photo below (click to enlarge) shows the daily number and size of fish and shellfish which a person is allowed to take in our region. 20 Scallops a day per person or 100 oysters make for a great meal.  So do 3 Kingfish a day when the minimum allowable catch size is 3/4 of a metre!! 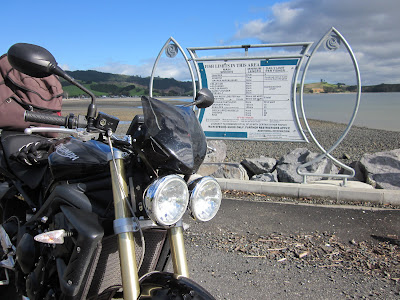 Idyllic Kawakawa Bay
Heading down the coast, the many flame trees were all out in flower making a spectacular sight.  Lovely to have flowering trees in winter. 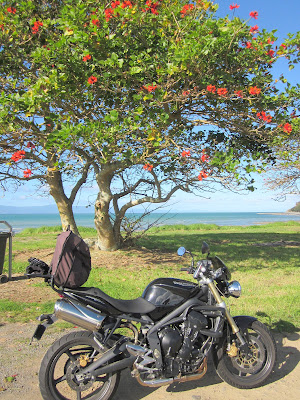 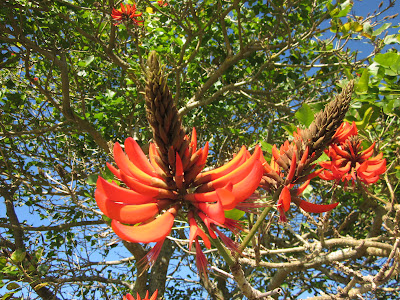 Flame tree flowers
Because it had been such a fantastic day in all respects - the practice had gone well, the weather fabulous, great things to see and do en route, a small indulgence was called for.  In my case, it was to let rip for the rest of the way home at ummmm.... significantly above the posted open road speed for the remaining 80 km to Coromandel. Maturity suspended for just a wee while perhaps.

All in all, one of those magic days with great outcomes which happened without really trying.  Still scratching my head as to why other days when you're equally keen to enjoy the ride turn to custard and nothing goes right.  At least this outing wasn't one of them!
You don't stop riding because you get old - you get old because you stop riding
Posted by Geoff James at 17:35