Crikey, this retirement business takes some organising!  Between doing voluntary work helping local senior citizens to use computers, acting as an unpaid carpenter for our offspring and IAM motorcycling involvement, there aren't many spare hours left in the day.  Still, at least we get to choose what we want to do and when to do it for much of the time!

Yesterday was no different as I'd promised to take out an IAM Associate, Ken, from Auckland to brush up on his open road skills.  There had been a snow dump in the central north island high country the previous day and although it was sunny, the strong southerly made it as cold as charity.  Wasn't looking forward to the early morning 2 hour run up to Auckland in those conditions so it was a case of piling on plenty of layers of Icebreaker merino clothing under the padded Gore-Tex riding gear and even slipping Rain-Off mitts over my winter gloves as a further insulation which paid off in spades. The trip was really enjoyable, simply by staying warm and by the time I reached Auckland, temperatures had lifted (just) into double digits C; although wind chill was quite noticeable.

Ken and I arrived within minutes of each other at a service complex just off the Southern Motorway - let me introduce Ken: 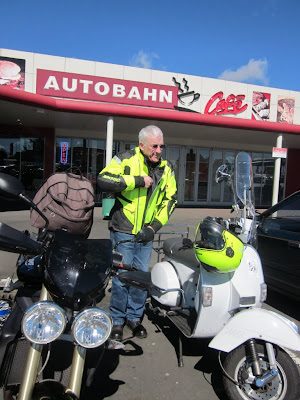 Time for a warming coffee and cake before the ride!

A lot of people think that  advanced roadcraft training with IAM is the exclusive province of big, fast roadbikes and whilst a lot of members do own big bikes, it's certainly not their exclusive domain.  Ken is a scooter enthusiast from way back, owning a 200cc Vespa.  He shares the common desire of other IAM members to ride safely to one of the highest roadcraft standards anywhere.  In an urban environment, small capacity scooters compete on an equal footing with any other bike but out of town, a high level of ride planning and situational awareness is required to meet the IAM requirement of "making progress".  Consequently, the decision was taken to plot a route which Ken wasn't terribly familiar with on 2 wheels just south of Auckland.  It incorporated a small amount of motorway (freeway) work, but mainly covered country roads of varying width, sweepers, blind bends and altitude changes.  A great challenge for Ken in terms of positioning and gear selection to make consistently good progress in unfamiliar territory! 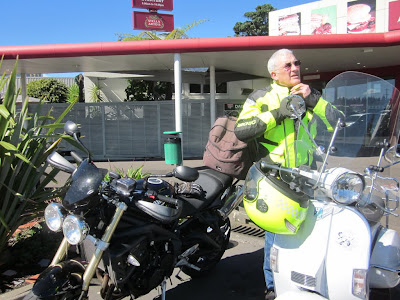 Getting ready for the "off" - really nice Teknic jacket Ken!

The ride was deliberately set up to be "informal" so there was no documented marking, enabling Ken to concentrate on one aspect of the roadcraft requirement without the stress of an "official" observation. After a short briefing and connecting his excellent Scala comms set to my helmet, we set off.   The benefit of concentrating on one single aspect of roadcraft in this instance became immediately apparent with Ken attacking the conditions with enthusiasm.  The bike to bike comms was a huge bonus, allowing both of us to offer up relevant information at exactly the right time for maximum impact. Without going into the minutiae of the ride, Ken acquitted himself really well and the scooter also coped pretty well in the strong winds which prevailed on some of the ridge tops. Equally importantly, it was fun for both of us!  After one or two more mentoring rides of this nature plus some solo practice, there's little doubt that the official IAM observed rides will show a significant jump in open road confidence and performance. (A more succinct phrase would be ride it like you stole it Ken!) 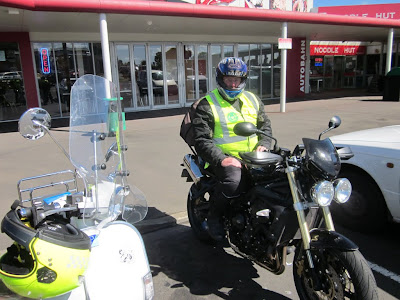 Yours truly, looking like Michelin Man but warm as toast!

I guess that the main point of this post is that no matter what you ride, there is no good reason not to aspire to riding to the very highest standards.  The other relevant thing is a comment by both motorcyling guru David Hough and Oregon-based instructor Dan Bateman that the instructor/mentor gets as much, if not more out of training sessions as the trainee.  On top of those benefits, the fact that the IAM operates on a completely voluntary basis, there's no downside whatsoever.  Thanks for a great morning Ken!

To finish on an entirely different note, here's a job advertisement from an NZ south island newspaper for someone to work on weed control on Department of Conservation land.  Isn't it wonderful to see a bit of plain talking in today's politically-correct environment?  Well done that company!!! 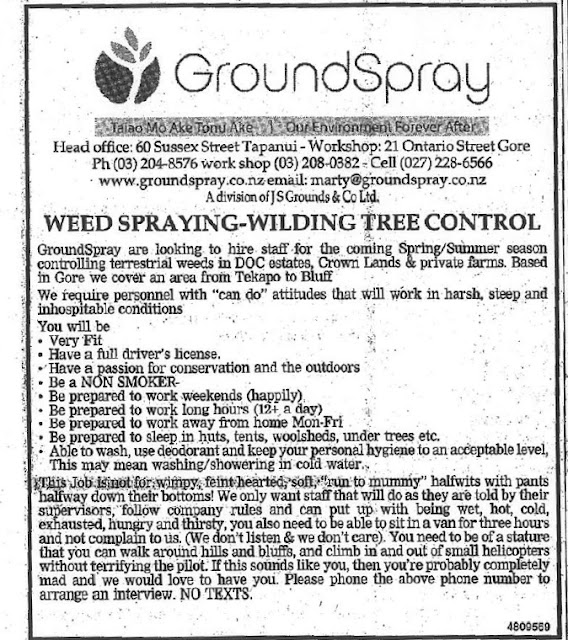