Today was the monthly IAM training run in Auckland which necessitates getting up at 0530 to ride the 180-odd km to get there.  If that wasn't bad enough, the clocks went forward to NZ Daylight Saving time last night so it was pitch black for the first part of the ride!  However, the forecast was for warm and sunny conditions which was a change from our woeful recent weather.

We knew it would be a good turnout with 4 potential new members (2 women, 2 guys) turning up too but as it happened, several Observers were unable to make it at the last minute.  A couple attended fellow moto-blogger and IAM member Roger's birthday celebration the previous evening so there might be a reason for their no-show.  The words "ill" or "looking after the kids" might be cover for another root cause :-).  Good on ya Rog, your hospitality knows no bounds!

The shortage of Observers to assess the advanced trainees meant a hurried reshuffle and Rog and I found ourselves with 2 trainees each to assess and coach.  I had Alan, a BMW adventure bike rider who is very skilled and will be sitting his full membership test before long.  I also had Charlotte, a sound engineer from a major TV network who had come along for the first time on her lovely black Bonneville. 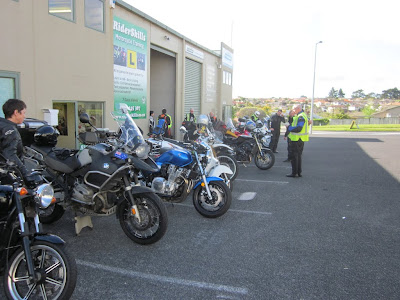 Great turn-out.  Charlotte and Alan's bikes in the foreground 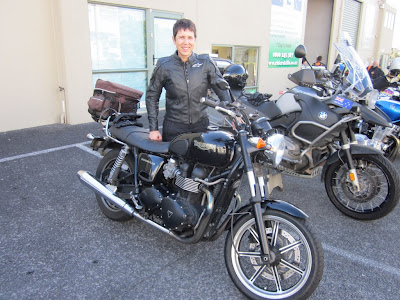 Introducing Charlotte and her Bonnie

After explaining the rules for the ride and assessment process to Charlotte, hopefully setting her at her ease and setting up bike-to-bike comms, we all discussed the route which was a technical mix of urban work, open country sweepers and tight, narrow back roads  with regular changes in posted speed limits.  Delighted to say that Charlotte had an absolutely fantastic attitude and soaked up the comments and suggestions which will move her from an already competent rider to a truly advanced one.  She wants to come back and learn more so I can't have been that much of a bastard!!  Alan had an exemplary ride, confirming that a check ride prior to sitting his full test is imminent.  Well done both of you! 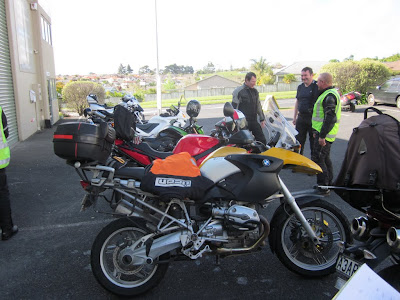 Socialising after the ride

With all the written assessments out of the way and everyone relaxing, Philip, our Chief Examiner, gave a demo for those who hadn't previously seen one of the correct method to pick up a bike by walking it up backwards.  Philip is slightly built but made it look easy and his Honda ST1300 must be one of the heavier bikes around, with a high centre of gravity.  The highlight for me was Roger having a go, mainly in anticipation of him stuffing up (that's what friends are for after all).  Kudos to Roger though and here's the evidence: 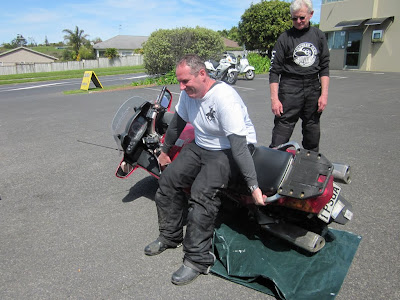 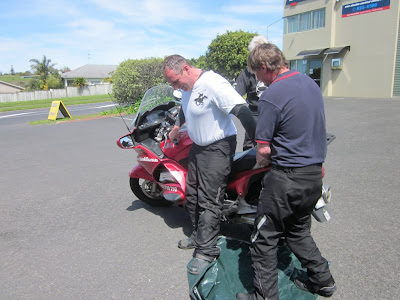 Any riding day is a great day, but the great weather and excellent company made it 420 km of sheer pleasure!
Posted by Geoff James at 17:29