I'd better start with an apology for pinching the title of Paul Simon's wonderful song but it's an accurate reflection of what Jennie and I have just been up to.

We always head off somewhere to celebrate our wedding anniversaries and celebrating 45 years of marriage required something a bit special, as does our forthcoming 70th birthdays!  Cruising the north west coast of Australia and exploring the inland wilderness of that region was an early possibility, as was self-driving the magnificent national parks in Utah and Arizona.  However, we managed to find something which fitted the bill perfectly - a safari for just 6 people through Tanzania and Kenya in a 4x4 - pure magic!!  Errr.... I did initially suggest a new bike (a 765 Street Triple) as my half of the celebrations but it was suggested that my health could suddenly take a turn for the worse.

However, getting there from NZ is a bit of a nightmare.  The options were several plane changes and waiting around at various airports, or face the world's longest non-stop commercial flight at 18-odd hours from Auckland to Doha in Qatar, then a 6 hour hop to Nairobi.  Facing a solid 18 hours in cattle class would be a killer so we decided that as part of the special celebrations, it would be business class, decent shuteye and hit the ground running (well almost).  Haven't travelled business class since retiring so being pampered is a rare treat!  Fortunately, we have a terrific travel agent who makes the whole organising business a totally painless process.

OFF TO DOHA
Well, travelling business class on long haul was definitely the way to go.  Apart from the excellent food and all the pampering, converting the seats to full beds meant that we were able to get around 7 hours good shuteye and not feel like zombies when we arrived. 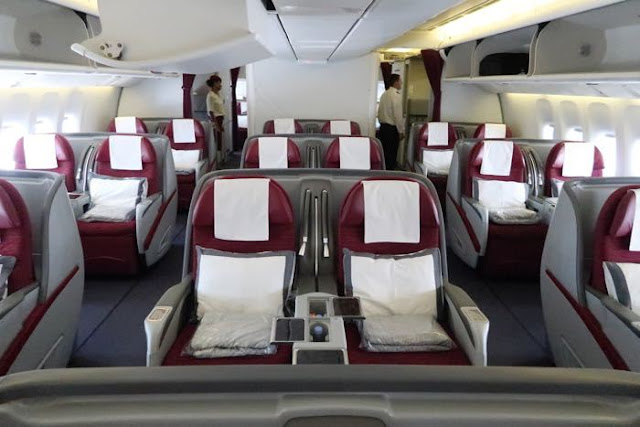 Adding to the experience was the express processing for business class passengers - out of the airport in about 20 minutes from landing.  We were met by a hotel chauffeur with a top of the range Lexus saloon.  As soon as Jennie saw the flash car, she whispered, "We're not going to have a repeat of Thailand, are we?" Regular readers may remember that incident but for those who don't, it's HERE .
Having received the warning shot across the bows, I behaved like we did this sort of stuff all the time and received approving looks from the CEO.

Whilst still in NZ, we had booked a desert trip in a 4x4 but weren't really sure what to expect.  The first surprise was when our driver arrived at the hotel to pick us up.  Close to 7ft tall, he was an imposing character but softly spoken with an excellent sense of humour. The 4x4 was a fully-spec'd Toyota Land Cruiser with a 5.3 litre V8 and an impressive amount of grunt.  On the drive out to the desert which took close to an hour, it was a good opportunity to find out a bit about Qatar from a local.  Like many Middle Eastern countries, it's run by a royal family and is seriously rich based on an oil economy and its spin-offs. However, what impressed us was that the rulers are clearly aware that reliance on oil is a strictly temporary arrangement in the scale of time.  They've embarked on a project called National Vision 2030 to develop an integrated approach to economic, social, technological and environmental harmony.  Progress is already evident with massive spending on getting the infrastructure right to support long term growth.  There are world-class roads and support networks being built everywhere to cope with sustained growth although it seems weird at present with very little traffic on them. 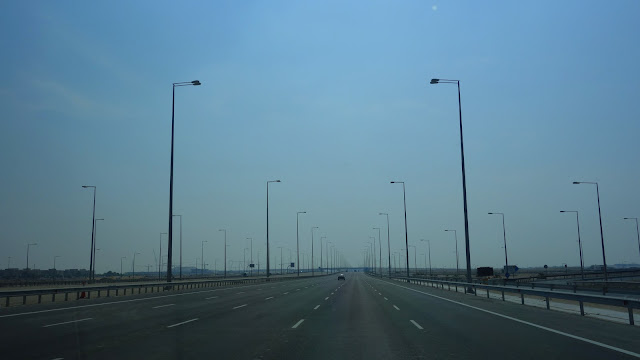 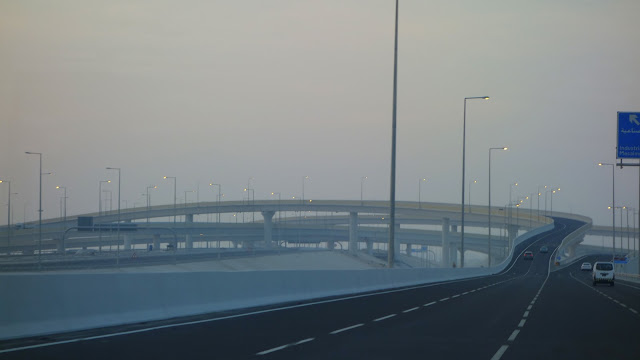 Roads to nowhere, but all part of a long term plan

There were signs of the oil and gas industry everywhere with flare stacks sticking out of the desert. The sky was a strange colour in a lot of places but we reckon it was caused by the wind picking up fine sand from the desert and partially blocking out the sun. 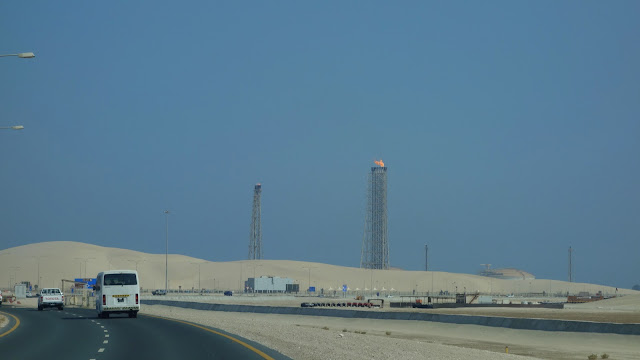 Eventually, we reached the seriously big dunes and joined up with 3 other vehicles from the tour company.  Whilst they were dropping tyre pressures to cope with the sand, Jennie and I hopped outside to take in the views.  Crikey, that was a shock!  45 degrees C (113F) and windy.  Very easy to see how short survival time would be without proper measures. 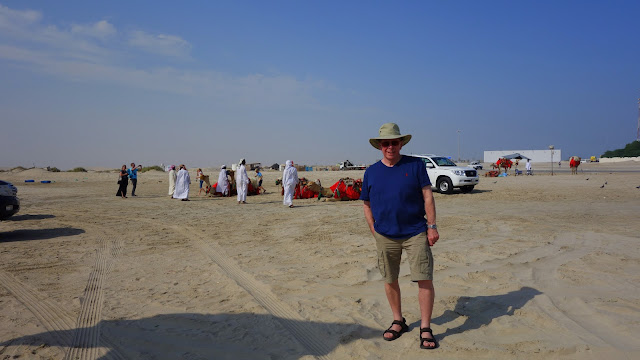 White robes make a lot of sense in these temperatures!

The 4x4 drivers are extremely experienced and skilled which is just as well as this was no granny tour! Absolutely exhilarating would be an understatement as we were really flying and sliding all over the place.  On one flat stretch, I saw the speedo touching what might be termed rather a lot which was pretty good on sand! 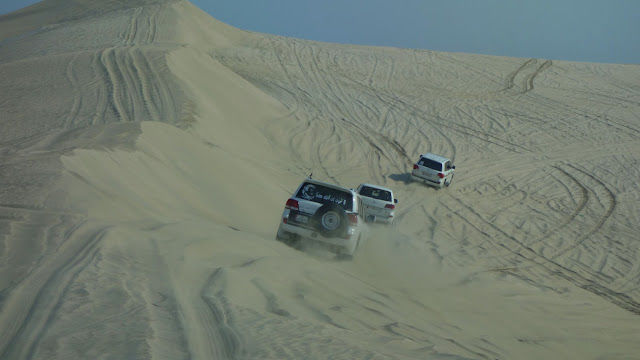 Stopping at the crest of one massive dune, I thought we were stopping to admire the view but we were merely lining up to plunge down a frighteningly steep angle for several hundred feet - talk about an adrenaline rush!!! 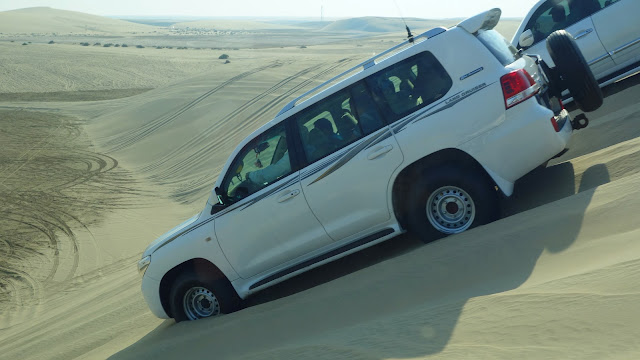 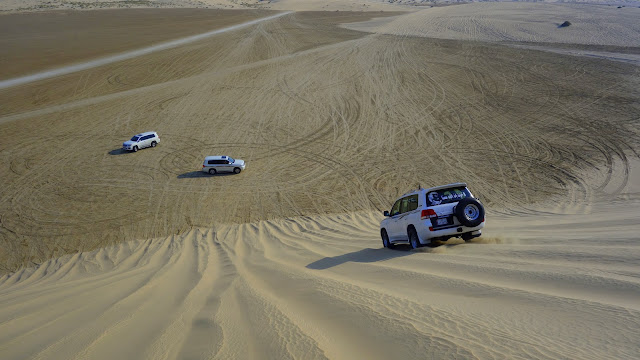 Making it down safely - our turn next!

We also stopped at what they called the Inland Sea where marching dunes had completely cut off the sea, forming a huge saltwater lake.  It looked surreal with the sand going straight into the water. 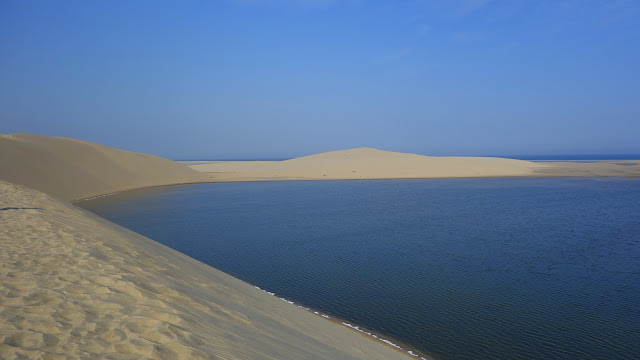 Part of the inland sea 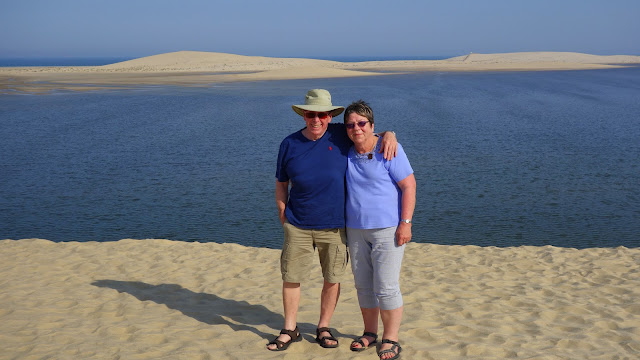 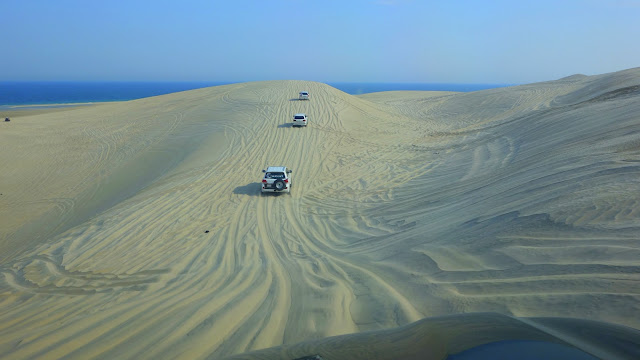 Fair screaming along - watch out for the dropoff! 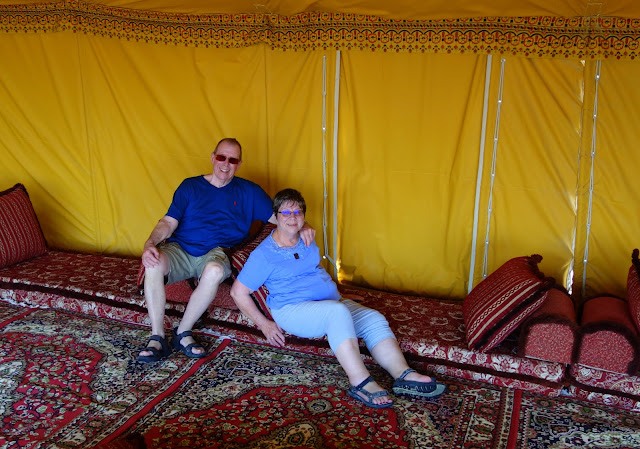 A quick break at a desert camp - pretty opulent tents!

Heading back in a different direction, we came across several people hang gliding the dunes which provided perfect lift.  Guess they were used to the heat and wind! 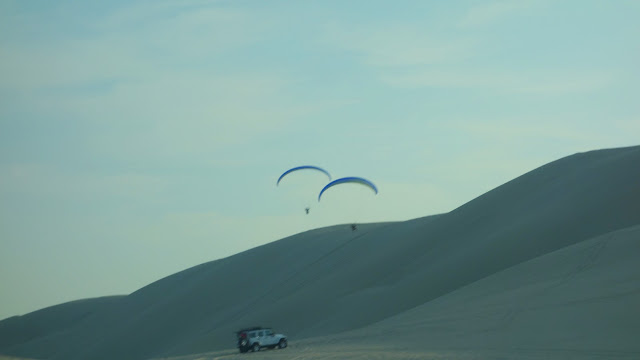 Hang gliders launching off the dunes

A really great start to our holiday.  Apart from the dune-bashing thrill, it's always a wonderful experience to see other countries and cultures for the first time.  Qatar was a delightful surprise and we were really impressed with their plans for the future when oil revenue starts to dry up.

Right, into Africa in the next instalment!