LAKE NAKURU NATIONAL PARK
On the drive to the World Heritage site of Lake Nakuru, we saw the Great Rift Valley for the first time and it's overwhelming. Unless you happen to be a Creationist, it's regarded as the Cradle of Mankind where the oldest traces of our ancestors have been found.   It's some 6000 km long and runs approximately from Lebanon/Jordan/Israel through to Mozambique.  Almost impossible to get your head round the vastness. 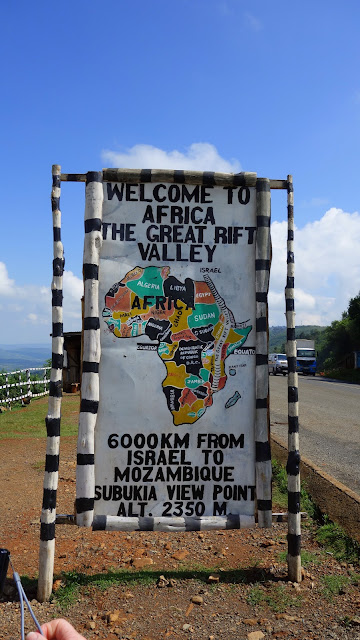 A valley on an epic scale 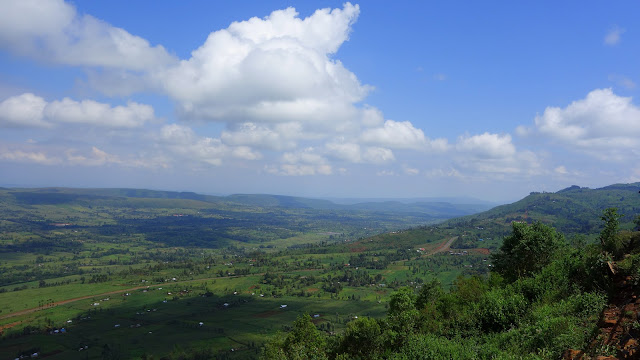 En route, we crossed the equator and stopped for a tug of war across the Northern and Southern Hemispheres!  The coloured buckets below were full of water and for some coins, the locals would apparently demonstrate that when poured through a funnel, the water would rotate in different directions either side of the nominal centre line.  We weren't that anxious to part with our money! 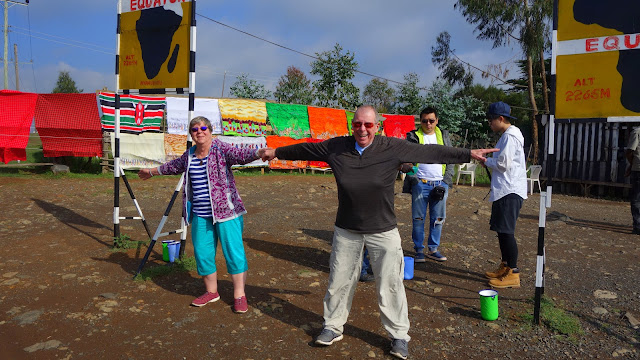 People-watching on the main highway was a pleasant diversion and just like south-east Asia, motorcycles are strictly cheap utility vehicles as opposed for fun.  We saw all sorts of precarious loads on them and the photo below is by no means the worst example.  In this case, two fully laden milk churns for the local village and a massive plastic bag full of something unidentifiable must have made the handling quite interesting.  Being an IAM Observer, it's nigh-on impossible to stop analysing other people's riding and driving habits.  Jennie hates driving whilst I'm in the car because she reckons that she can read my body language!  Anyway, I digress.  I'd been casually watching our guide Ole behind the wheel and was quite impressed with his road positioning and overtakes which indicated a good degree of situational awareness. Turns out that when he worked for British Petroleum in Kenya a few years ago, they put him through an advanced defensive driving course and it certainly showed.  Didn't mention any of this to Jennie on account of not wanting to be called a sad bastard, followed by the obligatory eye-rolling and sighs. 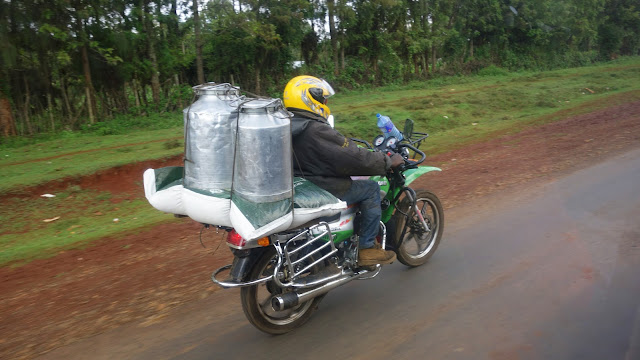 Just before turning off for the long dirt road drive to Lake Nakuru, we stopped at a roadside stall that featured crafts by local artisans.  They were beautifully made and really cheap after the expected haggling.  We eventually settled for a stylised wooden giraffe and a print of Maasai girls on cotton fabric which we're going to get framed. 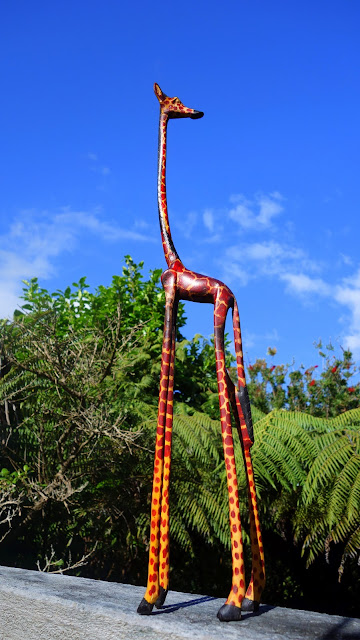 Ooh, what long legs you have! 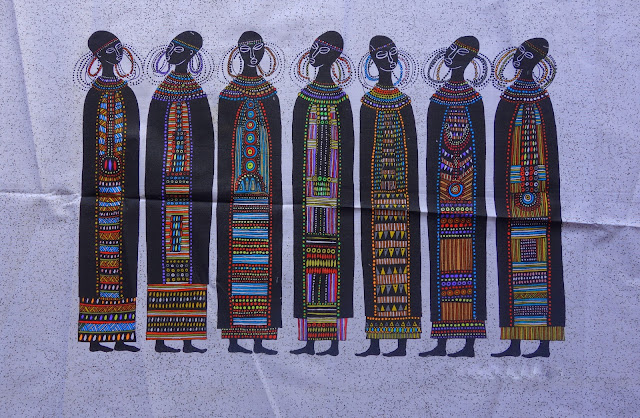 On reaching Nakuru National Park, it was much more like my idea of Africa with grassy plains, interspersed with trees and some water.  There were iconic African animals everywhere, although we still had to encounter big cats. 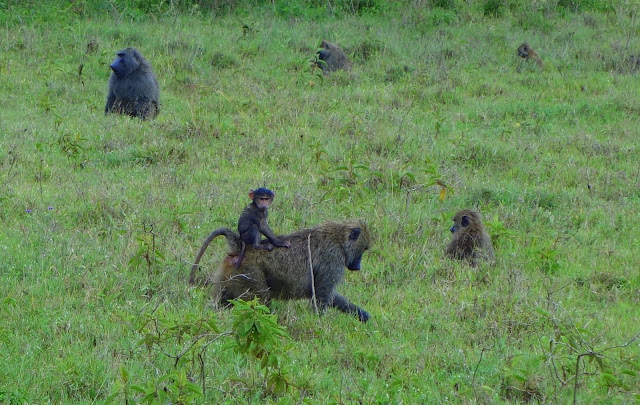 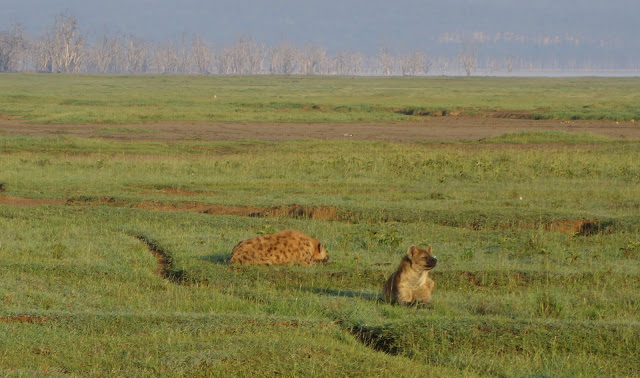 Coming out of the treeline, we encountered a couple of rhinos which steadfastly ignored us.  Whilst poaching still goes on from time to time in Kenya and Tanzania, summary justice meted out by armed park rangers and increased penalties has significantly reduced the incidence.  A lot of work is now going on with Chinese authorities in particular to curb demand by a series of initiatives. 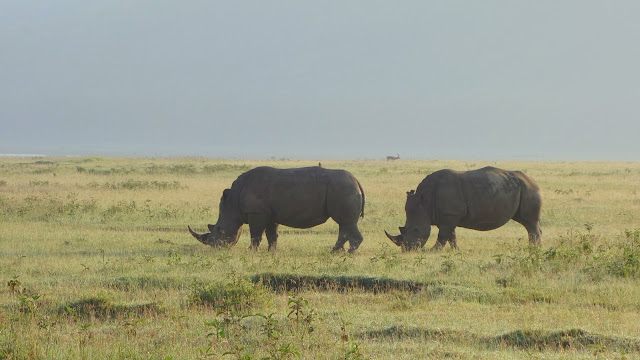 Tandem eating. What an absolute privilege to see them in their natural state

Zebra were everywhere and were often found with Wildebeest.  Apparently, it's a sort of symbiotic relationship where zebras have acute eyesight and Wildebeest have great hearing and smell. 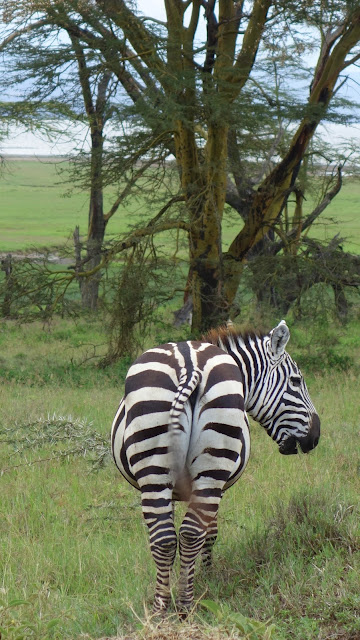 Does my butt look big in these stripes?? 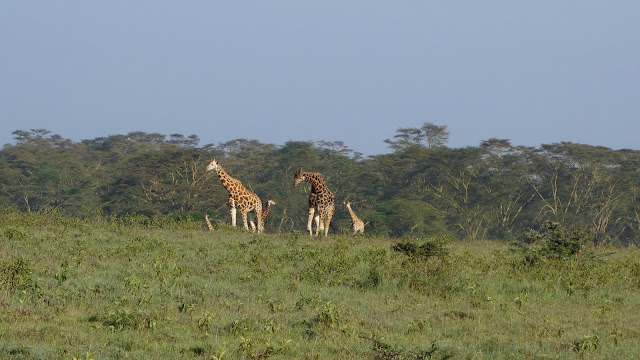 Our first sighting of giraffes in the distance 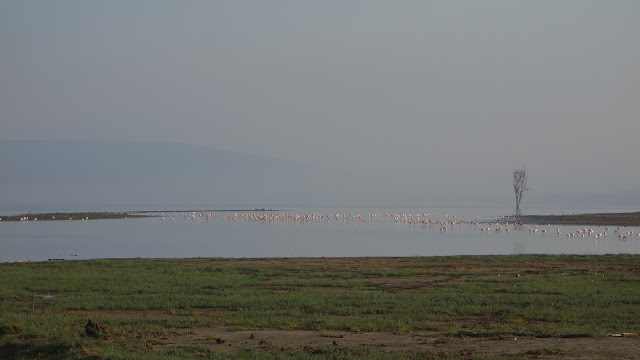 Pink flamingos on the lake edge

Next, it's on to Maasai Mara, the highlight of the Kenyan leg of the safari!