OFF TO KENYA AND ABERDARE NATIONAL PARK
Doha airport (Hamad International) is a staggering place and the business class lounge was more like a 5 star hotel with exquisite seating and as much free food and drink as it's humanly possible to tuck away!  We merely settled for a light breakfast as pigging out early in the morning didn't appeal one bit! 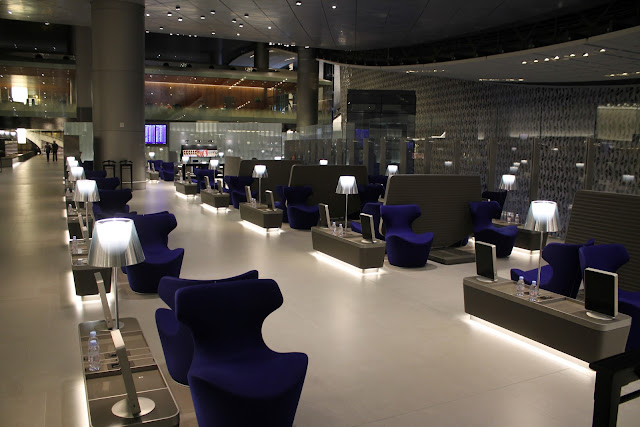 A quiet corner of the business lounge - talk about opulence!

Check-in for Kenya was rapid and efficient, if not somewhat bizarre.  One of the first questions we were asked was whether we had plastic bags in our possession!  Apparently, Kenya had banned plastic bags a few days beforehand because of a major plastic waste problem and we had to dispose of the various bags we had for wrapping dirty clothes and shoes.  Visions of the Plastic Bag Police at the border throwing us in jail after finding a small zip-lock bag hiding in one of the many recesses of our luggage!

Our plane for the 6 hour flight to Nairobi was a new Boeing Dreamliner and was really classy with coloured mood lighting and individual seating modules.  The windows also went opaque in different colours once in the air.  I can only assume that it was some electrostatic effect to replace the need for shutters.  The seats also converted to full beds and had in-built vibrating pads to stop various parts of the anatomy from going to sleep! Or maybe some other purpose entirely..... 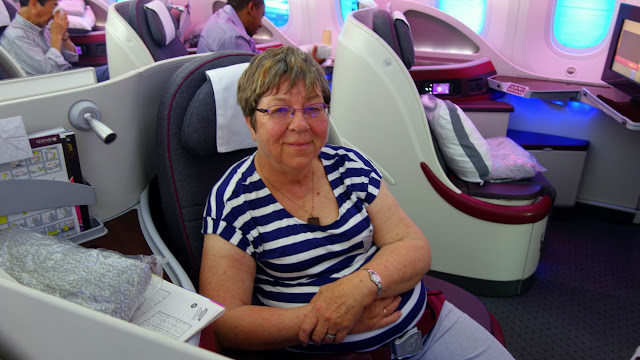 Arrival in Nairobi was a shock to the system after the luxury of the flight.  A chaotic arrivals hall saw us queuing (an inappropriate word if ever there was one) for over 90 minutes to get through immigration. However, the hotel driver had waited patiently outside and soon we were on our way to the hotel in the city.  It soon became apparent why there was a plastic bag ban.  The city approaches were over-run with plastic and paper blowing everywhere and it was filthy - not the best start to the holiday of a lifetime.  However, the city centre was markedly better and the Sarova Panafric hotel was excellent. Later that evening we met the other 4 members of the safari, all Australians, and we hit it off instantly.  Likewise with our guide, Ole, who was a Maasai tribesman in traditional clothing - really impressive.  More on that later.  Another interesting fact..... in both Kenya and Tanzania, virtually no-one smokes!

Early next morning, we headed for Aberdare National Park, a 1300 acre wildlife park in a long wheelbase Toyota Land Cruiser with a pop top for viewing in relative safety.  Toyota have this market totally stitched up as they are apparently bulletproof compared with other brands.  On the main highway, it was interesting to people-watch and see what was happening around us.  Private motorcycles are often used as local taxis to help bring in income as the unemployment rate is around 40%.  The one in the photo had a sort of  elongated umbrella attached to help keep off the rain!  Most of the bikes were Chinese and one might assume that the cheaper than Japanese purchase price was soon offset by the cost of breakdowns! 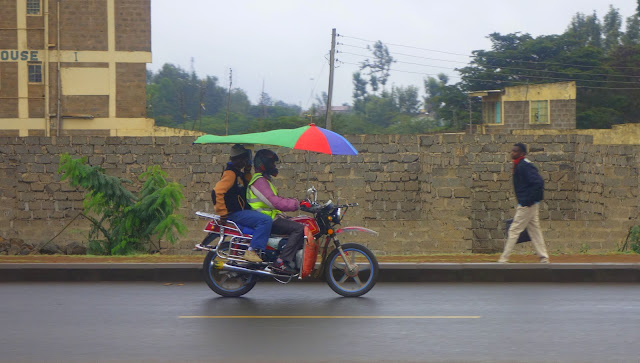 All sorts of local enterprises flourished along the main road.  The photo below shows beds which were being manufactured on the spot.  Must say that the standard of workmanship was exceedingly high.  Presumably aimed at wealthier Kenyans. 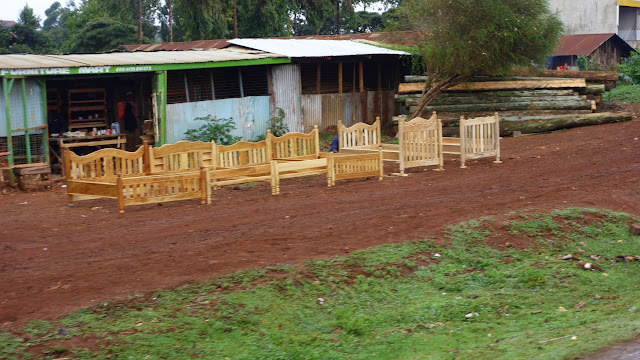 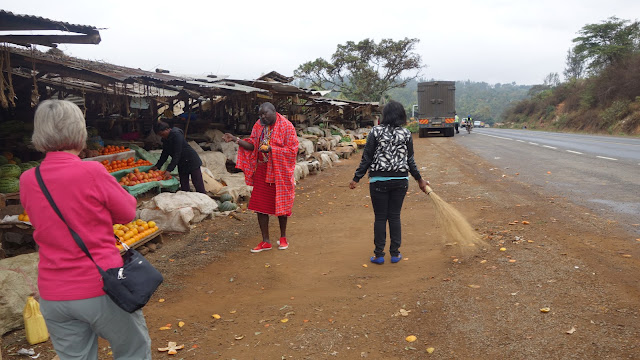 The first night was spent at the Aberdare Country Club which is a throwback to colonial days and a stepping-off point to the park itself - all very genteel.  Nothing really nasty in the grounds, just various antelope species and a troop of baboons in the distance so it was a gentle introduction. 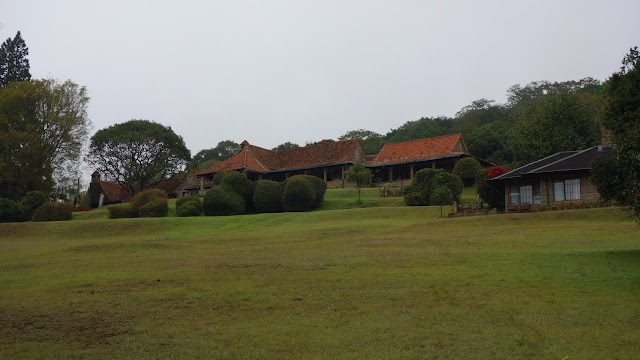 Aberdare Country Club.  Slumming it (not)

The next day saw us enter the park proper with strict instructions not to leave the vehicle without say-so as there were things with claws, teeth and horns waiting to make a snack of us.  Note the altitude on the sign below.  Much of our stay in Kenya, and Tanzania come to that; was at similar altitudes or higher. This kept the  temperatures to a pleasant high 20's C or early 30's.  The thinner air was noticeable for the first few days with any reasonable exertion. 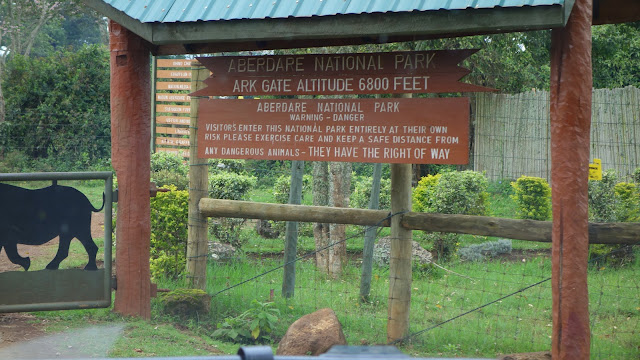 Warning notice - everything kills you in this park! 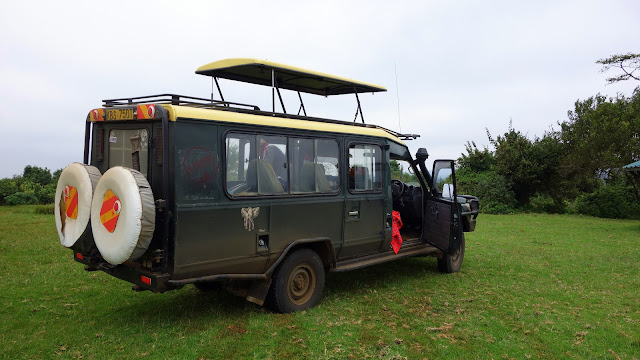 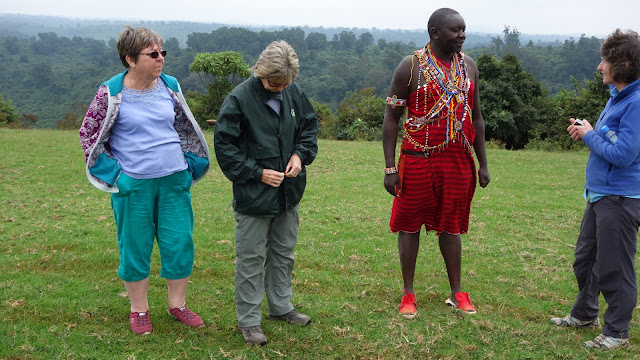 First encounter was with a single male buffalo.  Apparently, these feisty loners from outside the big herds are the ones to watch out for.  They pretend they're not interested in you until it's too late to run and then you're kebab meat on one of their horns.  The one below wasn't interested in taking on the Land Cruiser. 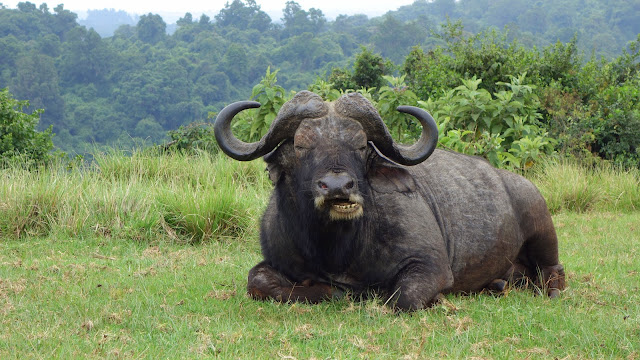 Would you like to come and pat me?  I'm very friendly.  Yeah, right! 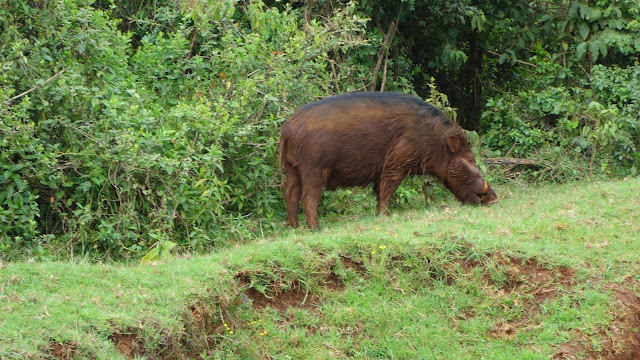 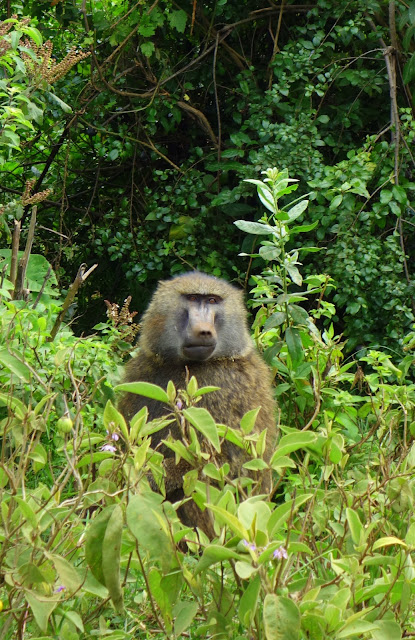 Ever had the feeling that something is watching you?

This region doesn't fit my mental impression of Africa with its vast, arid plains.  Its altitude and location means that it's covered with trees and bushes.  Not really jungle but a lot of vegetation and it's a bit disorientating.  There are a few big cats but we don't see them as they live at an even higher altitude where there's a handy food source of some type of antelope.

That evening, we stayed in park accommodation called the Ark.  The main feature was a waterhole adjacent to it with floodlights so we could watch the animals coming down to drink at night.  In the late afternoon, food was also put out for the birds and what a profusion of colours there was. 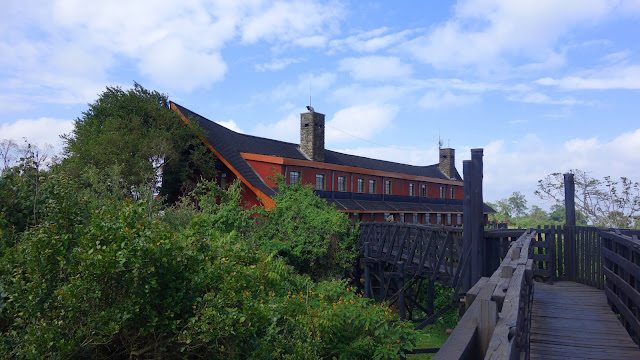 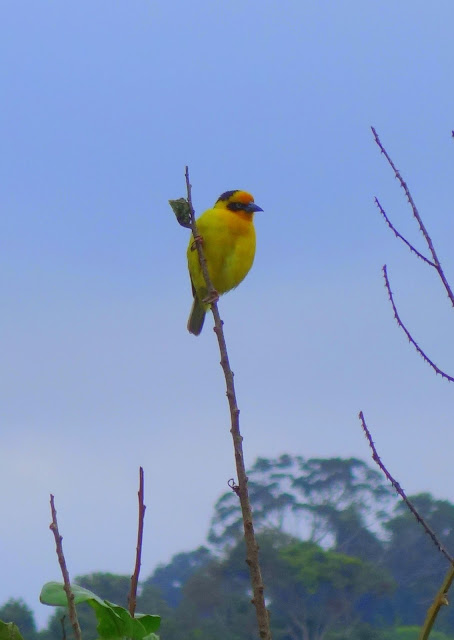 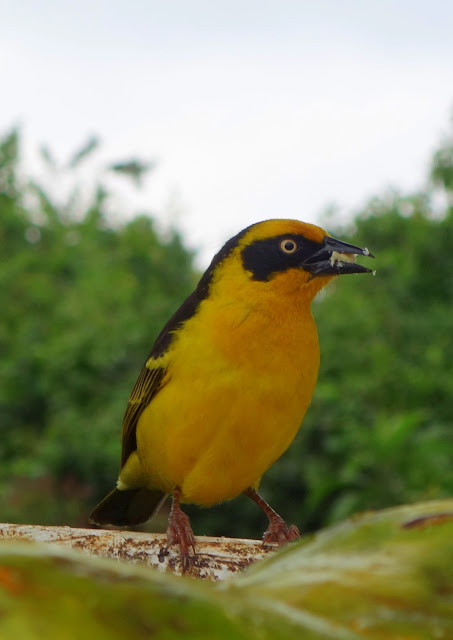 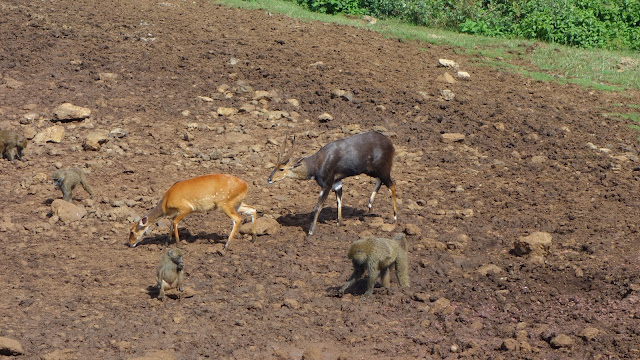 Antelope and baboons at the waterhole in daylight 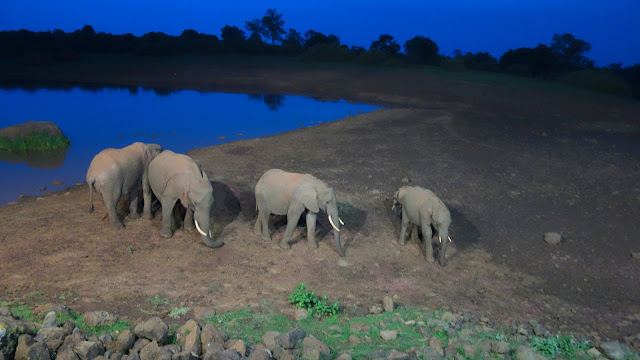 Elephants coming to the waterhole at dusk

Some of the wild animals actually interacted with humans.  Every night, a family of Genet cats which are similar in size to a domestic cat would ascend the spiral staircase outside the kitchen for meat scraps. They're only given a small amount to stop dependence.  Gorgeous creatures.  The photo I took isn't particularly sharp as I didn't want to scare them by using flash. 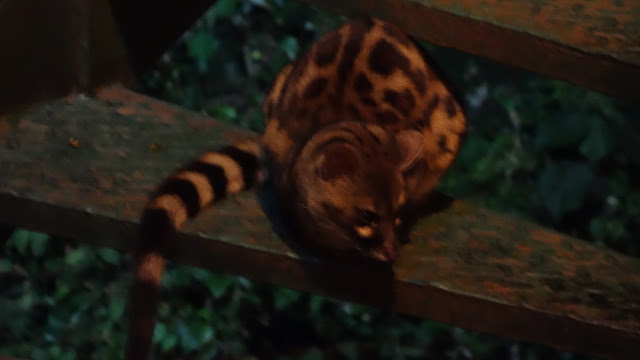 Leaving the park the next day,  we spotted some hyena cubs by the roadside which took no notice of us whatsoever. Clearly, Mum wasn't far away and we left them to their own devices.  The interesting thing is that in the national parks, very few of the creatures that live there have had adverse encounters with humans because of the strong protection laws so they take little notice of our presence, at least inside vehicles.  Outside, we'd be just another source of protein! 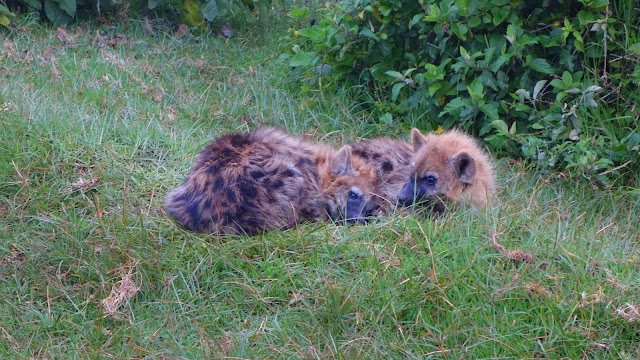 Hyena cubs by the roadside