MAASAI MARA
The next few days were to be spent on the Kenyan Maasai Mara area, over 1500 sq km in area and lightly populated.  Getting there was a bit of a trial with several hours of badly corrugated dirt roads but boy, was it worth it!  Interestingly, on the way in, we saw quite a bit of road and rail infrastructure construction being undertaken by the Chinese. Couldn't help wondering whether there was a price to be paid at some future date which wouldn't be in the best interests of Kenya.

Before leaving NZ, Jennie and I had purchased a whole load of pencils, pens and paper as we'd heard that education outside the main population centres wasn't well supported by the authorities.  We had a quiet word with our guide Ole, who knew where a bit of help would be very welcome. That lead to one of the highlights of our entire trip, and a pretty emotional one at that.

Seemingly miles from anywhere, we pulled in at a small collection of mud and wattle huts which was actually a school for the children of local Maasai families.  In most situations like this, children don't get an education at all but a local woman regarded this as totally unacceptable and set up some classrooms relying entirely on donations to fund the 3 teachers and materials.

We were welcomed by some of the parents in their traditional costumes which are worn by Maasai everywhere.  The bright colours allows them to be recognised over long distances.  The other male on the safari who is a farmer from the Melbourne area and I were invited to take part in a traditional dance and we were more than happy to make fools of ourselves! 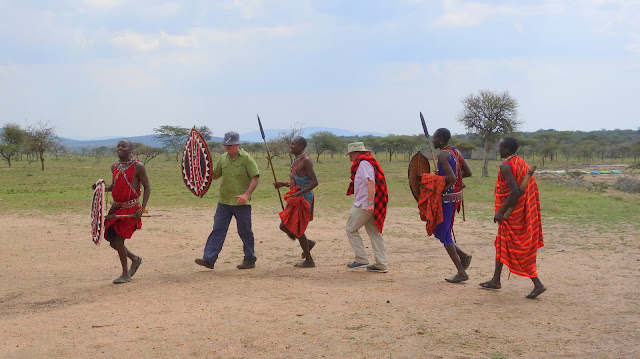 Maasai farmers and two people making fools of themselves

The classrooms were a revelation inside.  Pretty basic, but all the really important things were in place and the kids were absolutely gorgeous.  Staggeringly, they were taught (and were competent) in 3 languages - a local Maasai dialect, Swahili and English. 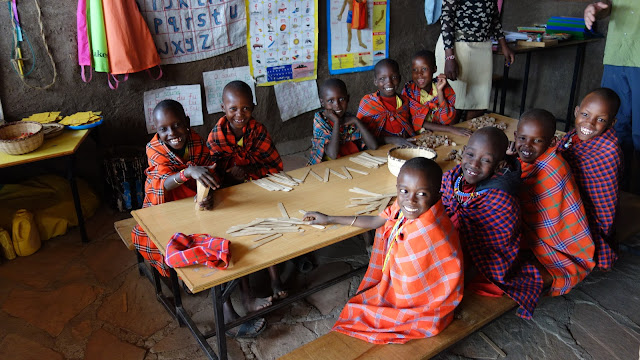 Wonderful kids - could have spent all day with them 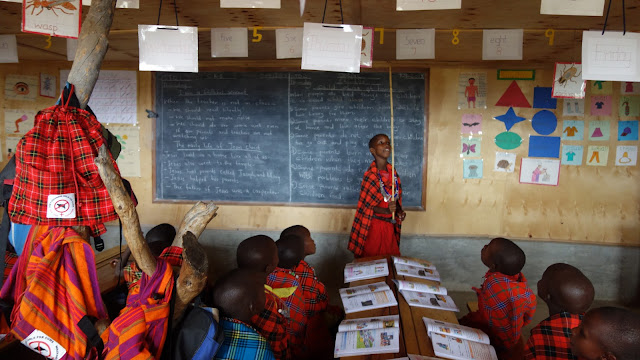 Leading a number exercise in 3 languages! 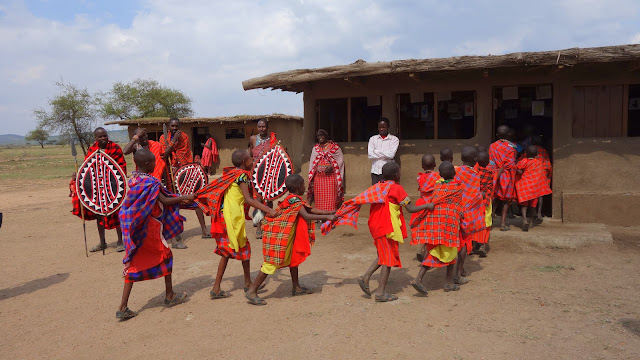 Back to the classroom

However, it was something else which the woman mentioned which nearly brought me to tears, and I wasn't the only one. Many of us will have read about female genital mutilation practised in this part of the world. It's now illegal to do so but apparently, it still happens in the remote areas. This wonderful woman provides a refuge out of her own pocket for teens whose parents plan to continue this practice and some of the tales were heartbreaking. On the positive side, we were introduced to a girl who had been rescued and was about to leave for university to become a teacher.  It was a fantastic example of what someone with drive and determination can achieve with limited resources and we were all completely humbled.

During our stay in this region, we lived in tented camps which were pretty cool.  These were a small collection of  individual canvas tents with toilets and showers attached and a canvas communal dining area some 100 metres away. Power was provided by a mix of solar and generator. We had strict instructions that after dark, if we wanted to step outside the tent, signal with a torch and someone would escort us as wild animals of all types roamed freely outside.  Indeed, we could hear things moving about during the night and a thin layer of canvas between us and them wasn't a comforting thought if there was something outside feeling peckish.  The food was excellent although omlettes for breakfast with lethal green chillies in them came as a bit of a surprise (gross understatement) for the unwary!

Here's some of the animals we encountered on our game drives and feel utterly privileged to have been able to photograph them.  The real surprise was the sheer density of the animals.  You only had to drive for a minute or two at a time to find something new. 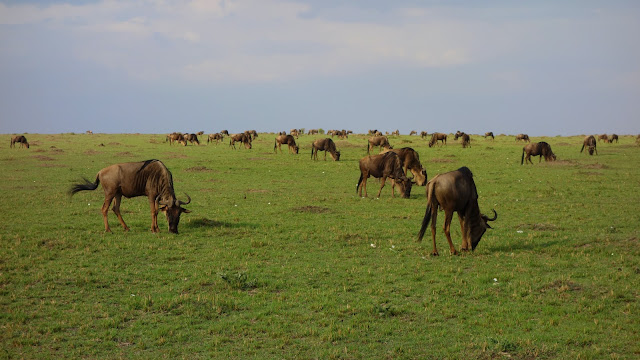 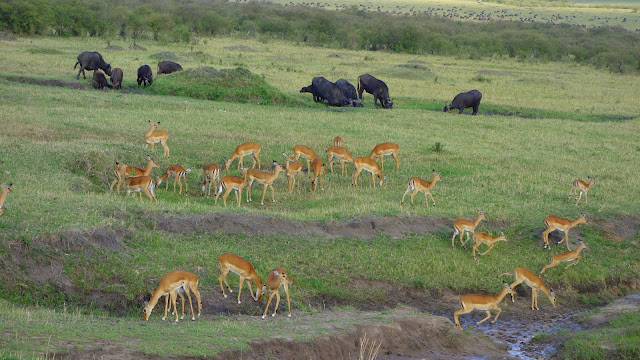 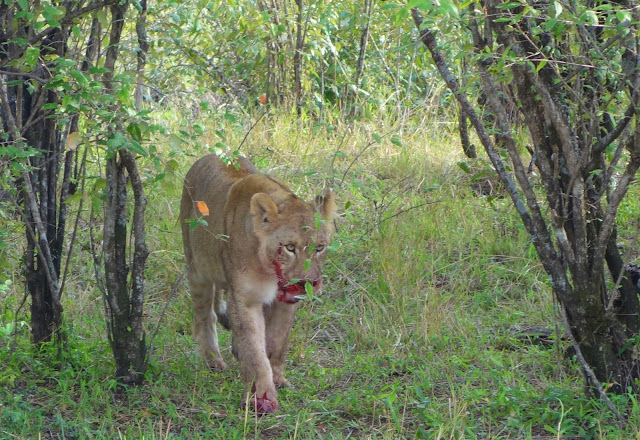 A lioness has just killed a buffalo 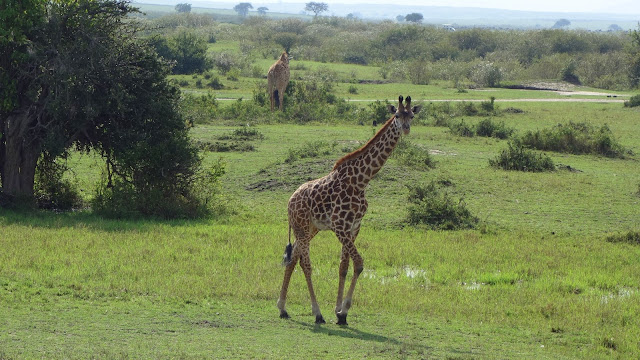 Who are you staring at???

I guess we all have favourite animals and mine is the Cheetah.  I'd be hard-pressed to tell you why but it's probably got something to do with their aloof elegance - a bit like a model on a catwalk.  We came round a corner and there was one chilling out by a bush  - utter magic.  The safari could have ended right then and I'd have been happy but there was a lot more to come. 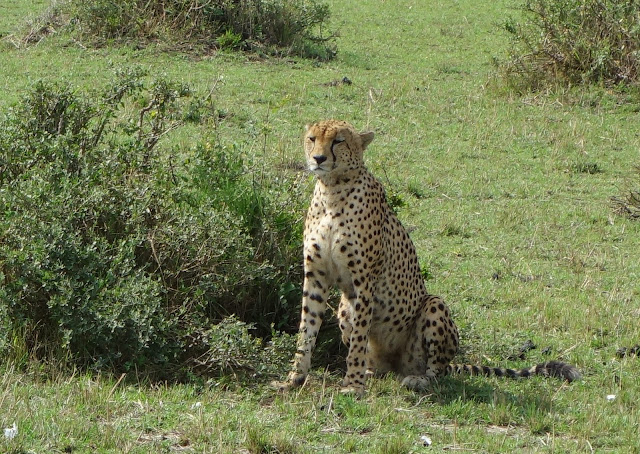 I'm faster than you, I'm more beautiful than you, human!

We then had a reminder of the life and death cycle on the great plains with a flock of vultures dismembering the remains of a carcass with a Marabou stork hanging about waiting for its turn. 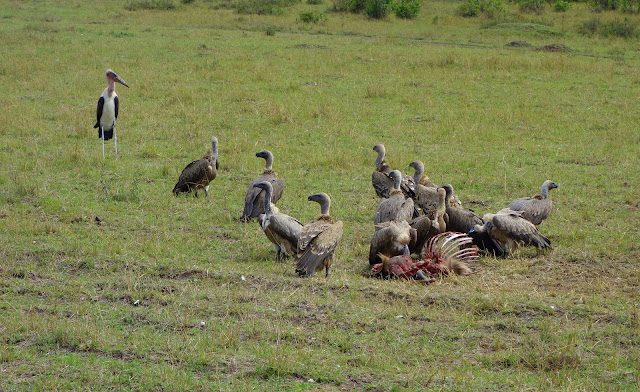 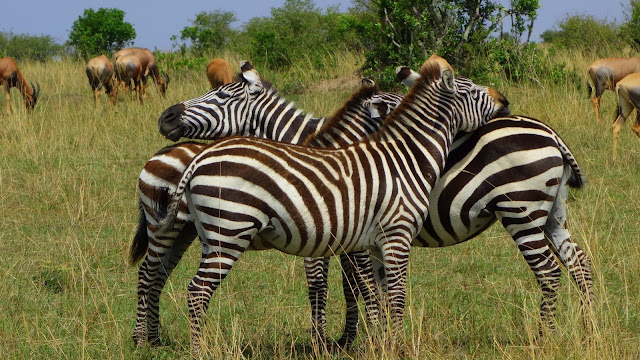 A Dazzle of Zebras (what a great term for them!)

Near the spot we were due to stop for lunch, we came upon a male and female lion who were, to use a technical phrase, "getting it on".  Indeed, they were getting it on so often that out of politeness, we had to delay taking our photos!  Here's one between sessions with the lioness in the missionary position.  Those early missionaries had a lot to answer for :-) . 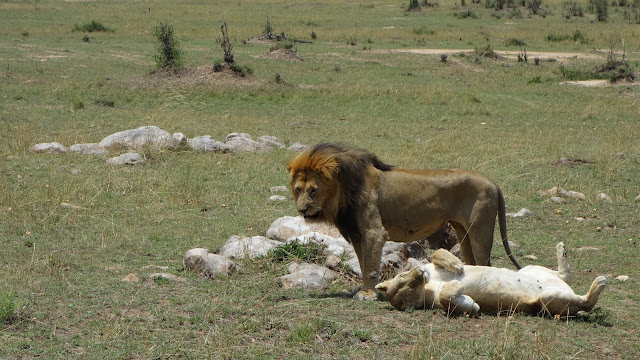 How was it for you, dear? 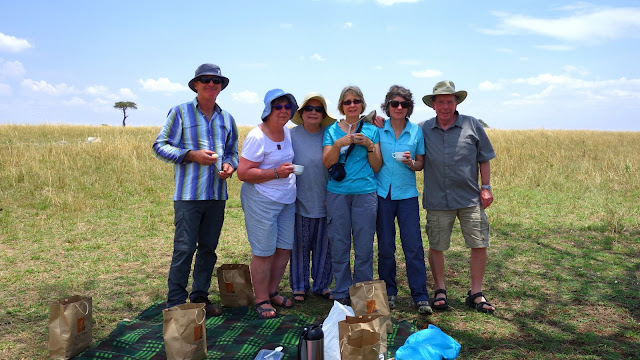 Lunch stop - our guide keeping a lookout to stop us from becoming lunch!

As a slightly amusing aside, consider the practicalities of taking a pee in hostile country and where there is also relatively little modesty cover.  Or as our guide Ole calls it, "Marking your territory".  Ole has the answer for that.  He parks the Land Cruiser a short distance from the picnic site and the girls go behind it whilst the guys walk a 100 metres in the other direction and stand with their backs turned.  Ole remains in the vicinity of the picnic area with his big knife in case things with lunch on their mind show up.  I must say that everyone took the arrangement in their stride, probably because there was no alternative. 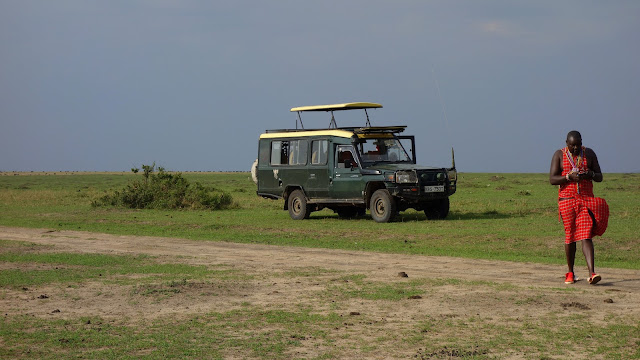 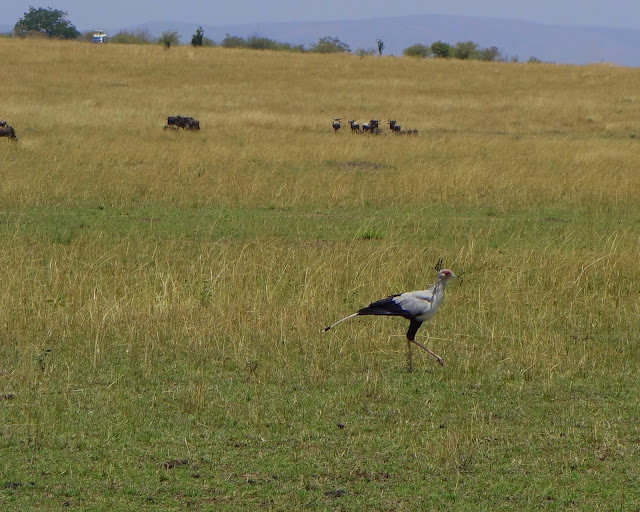 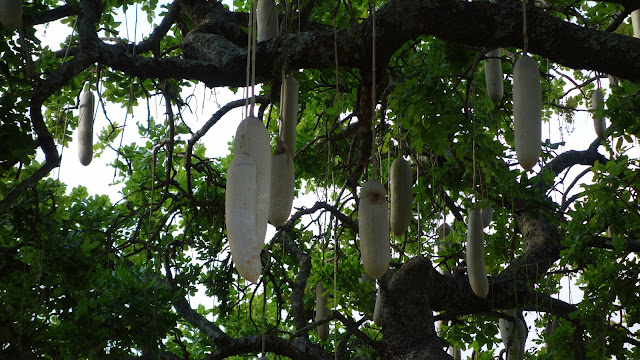 We headed towards the Mara River in hope of seeing the Wildebeest cross the river as part of the Great Migration.  Sadly, they came up to the river, took a look and for some reason, decided not to cross at that particular time.  However, there were plenty of distractions just upriver including a bunch of hippos lounging on one bank and a rather large crocodile watching hopefully from the other. 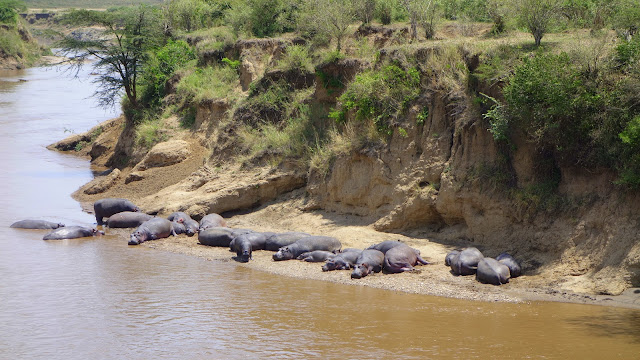 A bloat of hippos 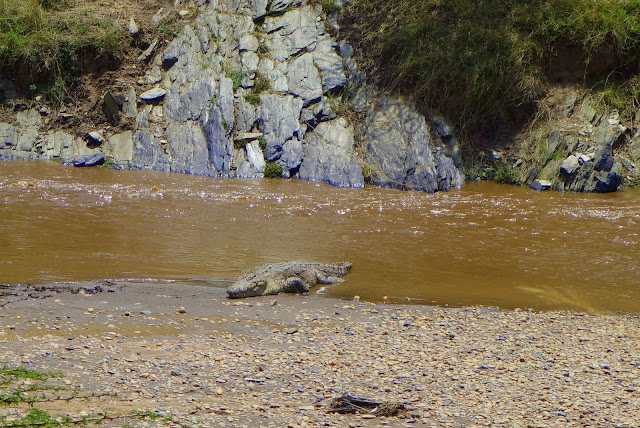 The stay in Maasai Mara concluded our stay in Kenya and we headed back to Nairobi ready for more adventures in Tanzania.  We were really sorry to be leaving Ole behind as he'd been such fun and a wonderful guide.  We were also sorry to be losing Chris and Martin, two of our Aussie friends who had been such great company.  They were heading to another part of Africa to continue their travels.  On the way back, I took some random photos to illustrate everyday life along one of the main highways. 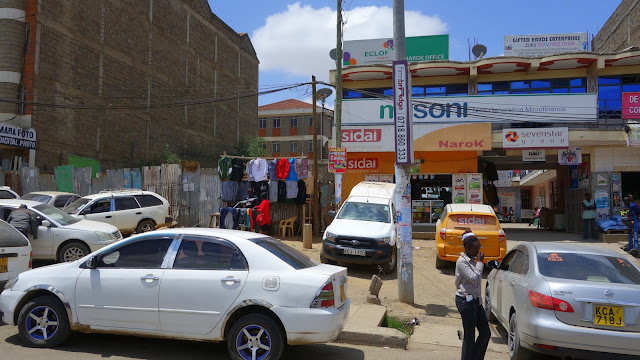 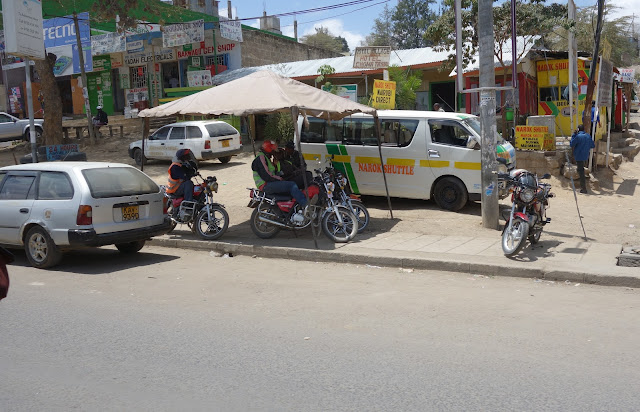 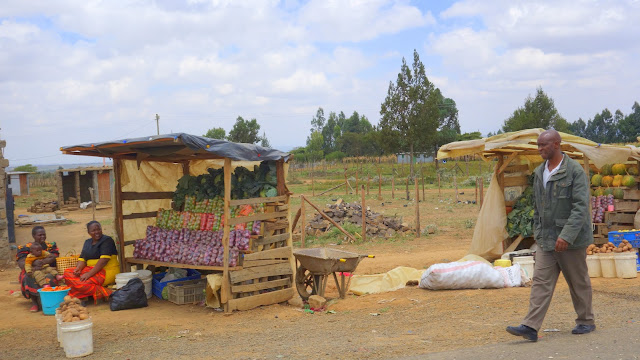 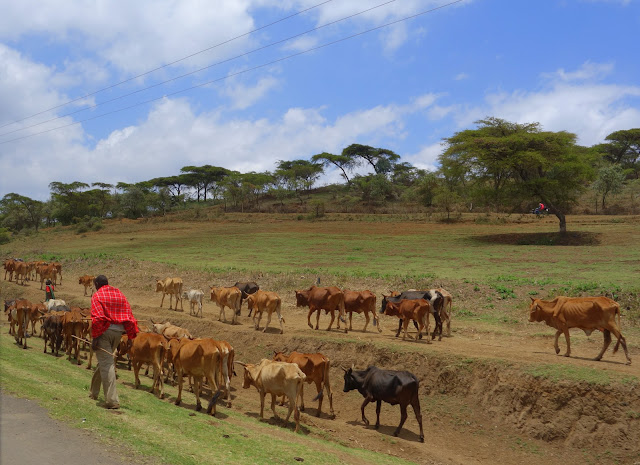 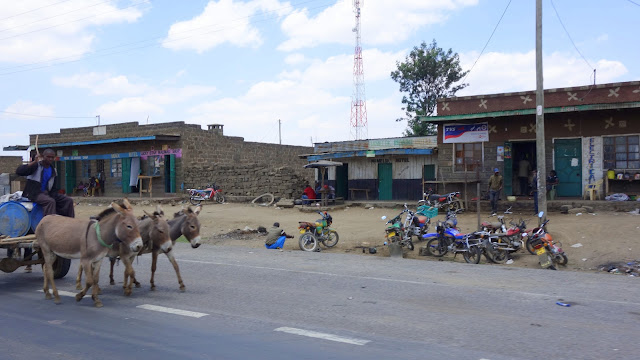 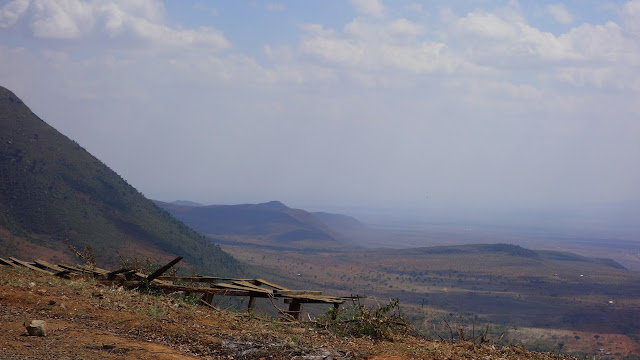 Ascending the edge of the Great Rift Valley

For several km coming into Nairobi, the main road margins are literally jammed with businesses plying their wares and make a both interesting and colourful backdrop.  For some reason, the manufacture of ornate gates for properties is fairly common and it has to be said that despite a lack of modern manufacturing tools, the standard of workmanship is exceptional.  Also, coloured pots make a great roadside display. 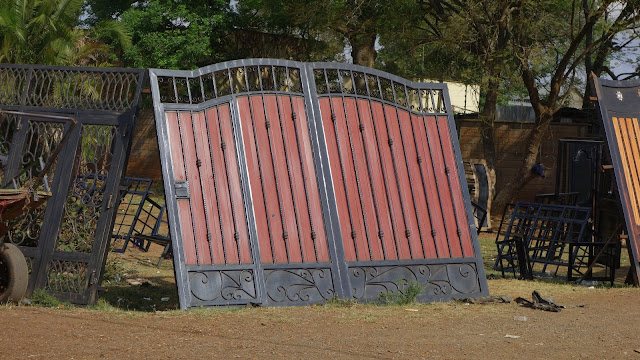 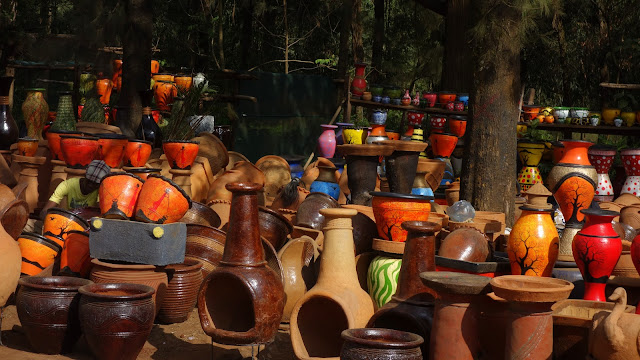 Pots by the thousands along the roadside

All too soon, our week in Kenya was over and it was sad to say goodbye to Ole who was a superb ambassador for his country.  What a thrill it was to see all those animals in their natural habitat, the stunning scenery and equally importantly, the wonderful people we met along the way.  Time to head to Tanzania for the next part of the safari!
Posted by Geoff James at 15:37