BOUND FOR TANZANIA AND LAKE MANYARA
We stagger out of bed before dawn to catch the early flight from Nairobi to Kilimanjaro Airport in Tanzania.  This is a flight arranged by the tour company and as with our inbound flight, Nairobi Airport is heaving with people, even at this early hour.  I'm the first to check in, using an automated self-check booth then disaster strikes!  I help the next person from our safari to use the terminal and it won't confirm the flight for her.  A hurried consultation and we decide to join the normal check-in queue to get it sorted.  Well, it doesn't get sorted.  In short, my check-in must have been sheer luck because the Kenya Air flight has been grossly overbooked and the rest of the safari party have been bumped.  This is the first time anywhere in the world that any of us have experienced this and having the group split up with tight schedules and a new guide due to pick us up at Kilimanjaro, things are looking pretty grim.

To cut things short, the decision is taken for me to go ahead on my own, meet up with our new guide and see if he can get things sorted.  The flight, getting a visa and meeting our new guide, Rama, all go smoothly and he leaps into action.  Kenya Air can't get Jennie and her two fellow travellers on a flight for 12 hours so they put them up in a nice hotel to while away the time.  Our schedule calls for us to pick up 2 new members for the Tanzanian leg of the safari in the nearby city of Arusha, visit Tengeru village on the outskirts of the city, then travel some distance to a tented camp at Miguna to begin the safari proper.  Because of this, arrangements are made to put the stranded safari members up in an Arushan hotel overnight, then bring them to the tented camp early the following morning with another driver.  If it hadn't been for the prompt action by Rama, things would have unravelled pretty quickly.

Driving into Arusha, it became immediately apparent that in the urban areas, Tanzania was a lot cleaner than Kenya.  Rama said that on one Sunday a month, all Tanzanians are expected to spend a couple of hours cleaning up litter in public areas - nice one!  After picking up the new safari members Mervyn and Denise, also Australians; at a hotel, we headed for the village where a nice surprise was waiting for us.

Tengeru village was leading a self-help environmental sustainability programme and other support activities for the surrounding area, giving villagers the tools to collaborate with each other on horticulture, coffee production etc whilst minimising their footprint on the environment.  Other activities such as women's projects and orphange support were also funded by cultural tourism (www.tengeruculturaltourism.org).  It was being run by a lovely woman called Gladness Pallangyo and 2 young men in their 20's who were incredibly motivated and smart.   They were even using cattle effluent to produce methane which was in turn used for lighting and cooking, then onto the plantations as fertiliser.  Just how cool can effluent be, especially to an engineer? (No need to answer that!) 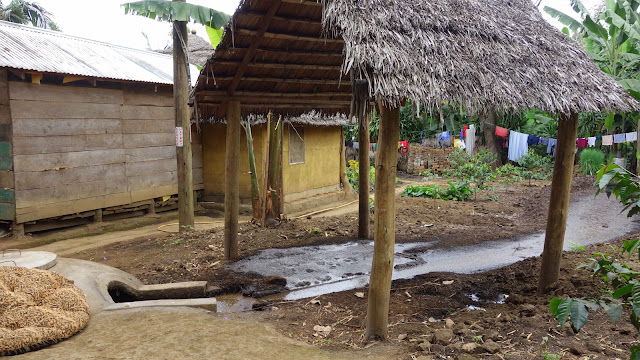 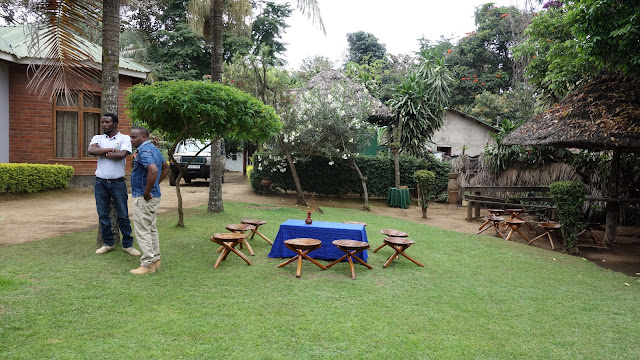 Our guide Rama (right) with one of the movers and shakers - cool stools for coffee tasting!

We were shown their Arabica coffee plantation and then taken through a traditional process to manufacture coffee, including drinking the end product! 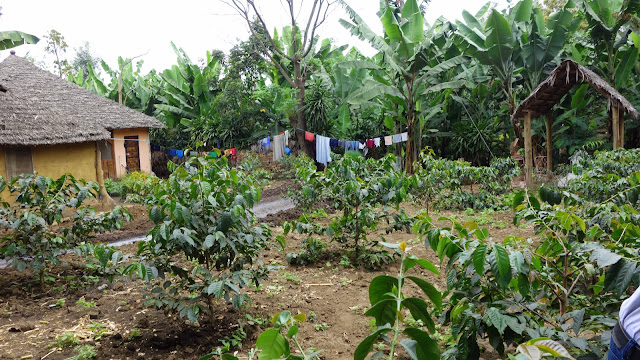 Young Arabica coffee plants with a banana plantation on one side 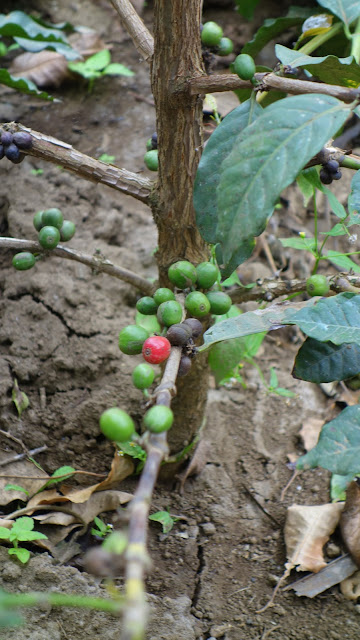 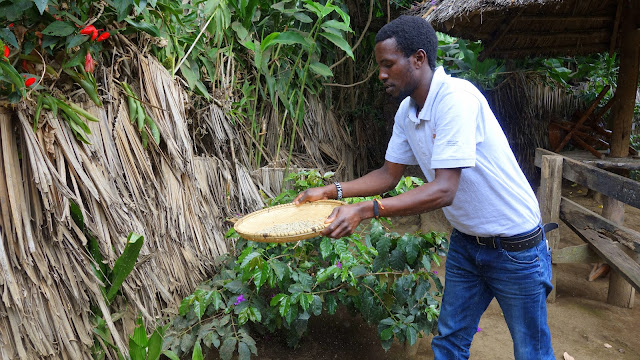 Winnowing the beans to get rid of the husks 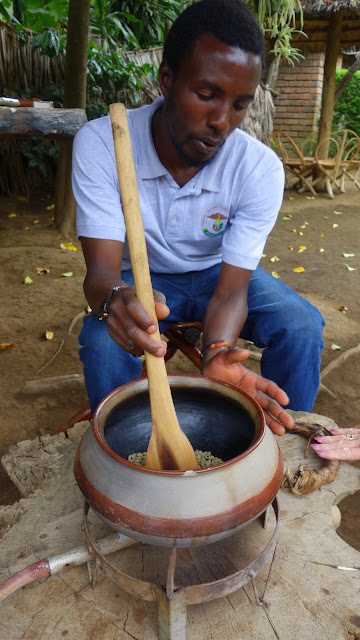 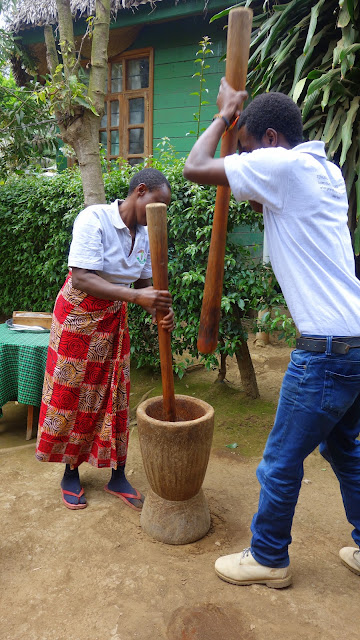 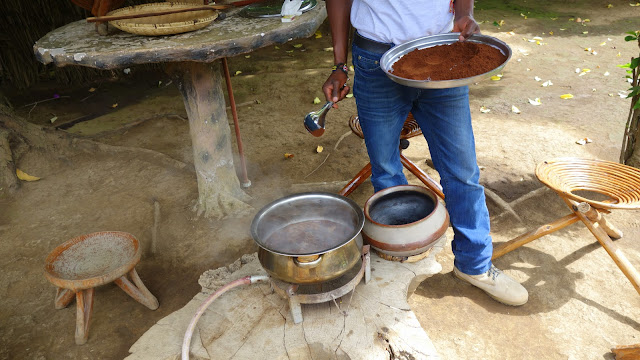 Adding the ground coffee to a simmering pot - it was absolutely delicious!

It was fantastic to see and hear about a self-help programme run by locals, for locals in action.  Far more effective than just throwing aid money at it which has a tendency to create dependence.  Just before we left, I strolled over to Gladness to thank her for spending time with us and to wish her well for the future.  In the delightful, open way that Africans have, she grabbed me in a bear-hug, planted a kiss on each cheek and said, "That's for your family".  Then she planted a smacker straight on the lips, winked and said, "And that's for you" !!  Wonderful - I could get used to that!

Setting off mid-afternoon for the tented camp at Miguna saw a fair bit of travel on sealed roads but far from being boring, there was always something to see. Rama noticed a movement in the roadside bushes at the roadside and pulled over........ 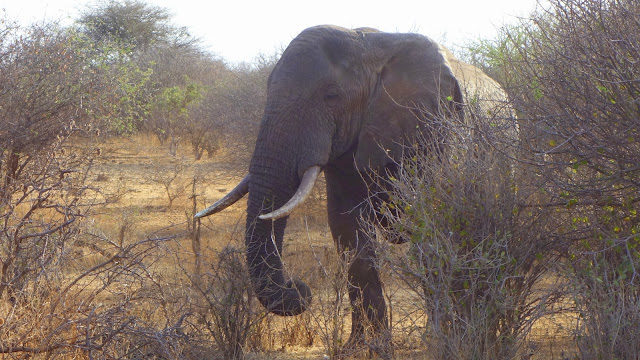 This bull elephant was the advanced guard for a small herd of elephants crossing the road.  In NZ, you might encounter the odd deer, cow or sheep in the road but in Africa, the consequences of running into one of these doesn't bear thinking about! 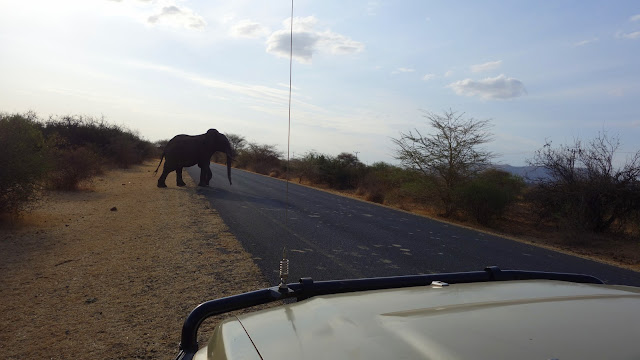 Don't smack into one of these!

We received the normal warm welcome at the camp but it felt odd not having Jennie and the other two members of the safari with us, hoping that their travel arrangements to meet up early the next morning worked out ok. 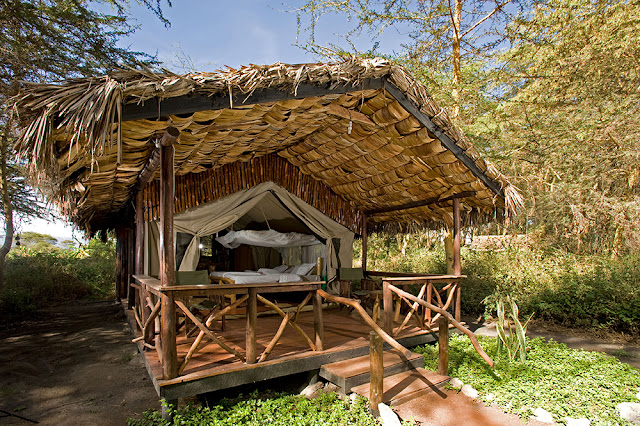 Sitting eating our breakfast early the next morning, Jennie, Silvana and Bev arrived from Arusha having got up at 4 a.m for the drive to meet up with us - delight all round as mobile phone communications have been patchy to say the least.  It was a relatively short hop to our next destination. The park consists of 330 sq km of arid land, forest, and a soda lake which can cover as much as 200 sq km in the rainy season. The amount of bird life at the lake was truly mind-bending with so many species - flamingoes, pelicans, storks, egrets etc.  You name it and they were there. 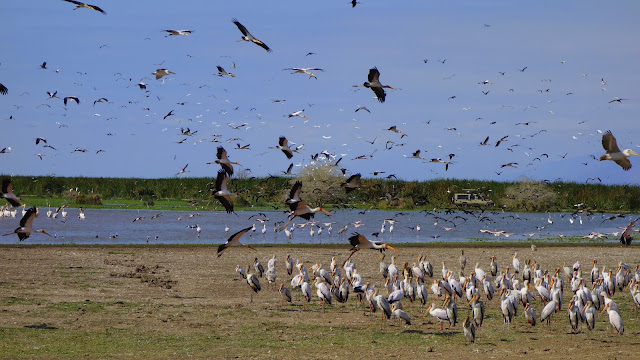 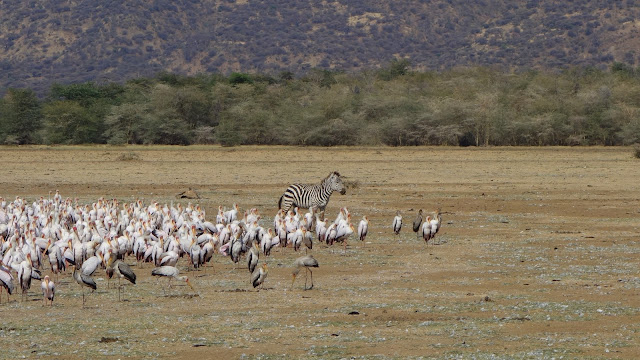 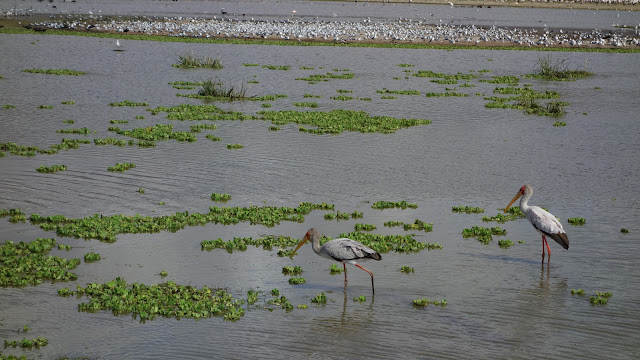 Yellow-billed stork looking for a feed 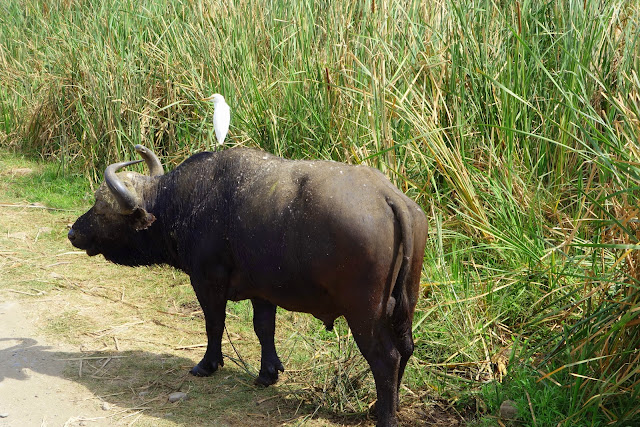 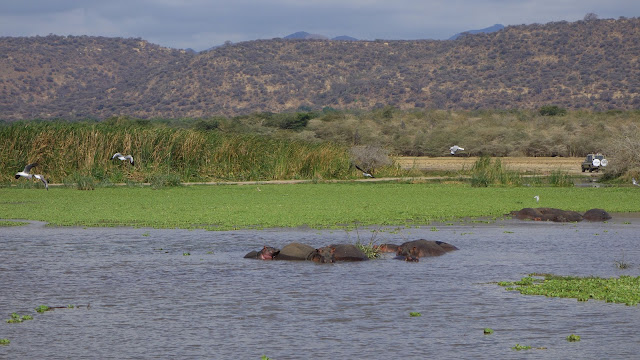 Hippos chilling in the lake - unpredictable buggers to be avoided

Leaving the lake edge for the trees and grassland, we were again staggered at the sheer profusion of wildlife. 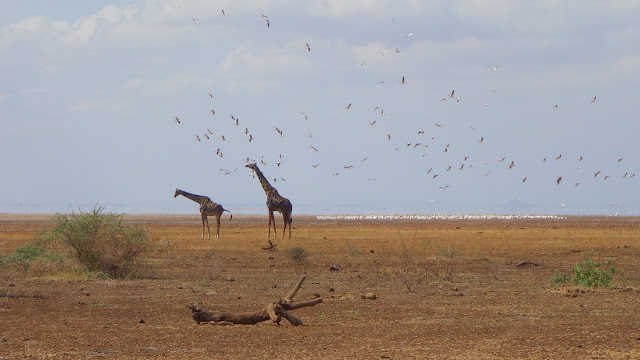 Giraffe and the ever-present bird life 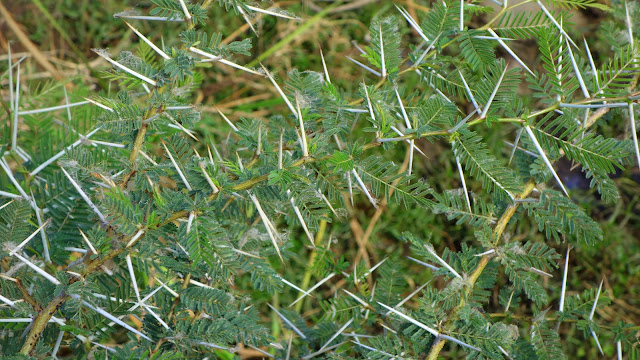 Don't fall onto these!  Wicked Acacia thorns over 2" long 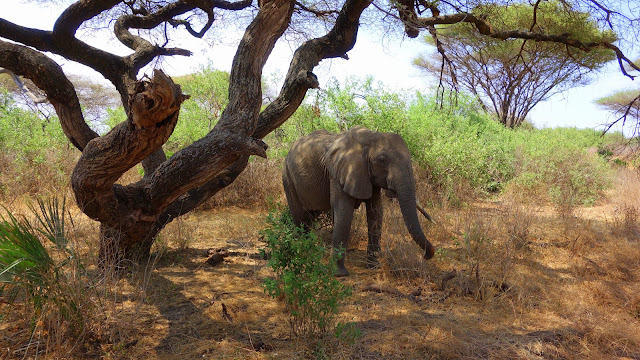 Snacking on the shrubbery 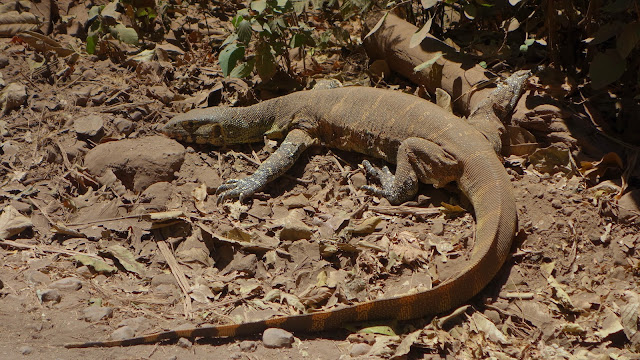 Large lizard on the track 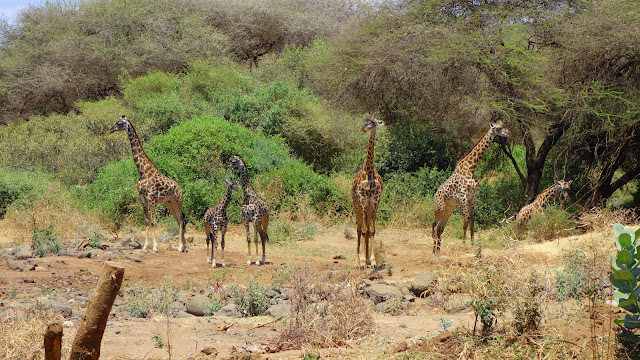 Family of giraffes striking an artistic pose for the camera

Where there's water, there is greenery.  Once the water stops, there's almost nothing.  It really surprised us how sharp this transition can be.  In the photo below, we're in an area where there are springs and standing water.  In the background perhaps half a kilometre away, that's not water, just a dry dusty plain stretching into infinity obscured by heat haze. 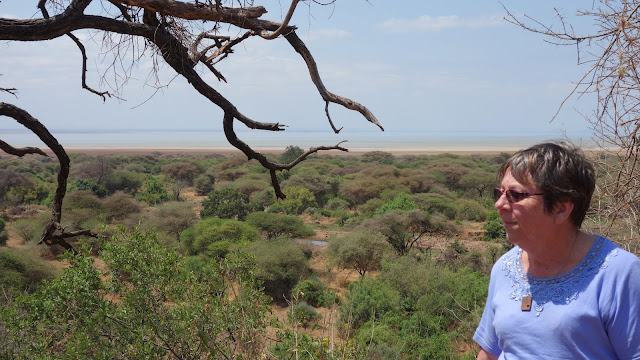 Water means life to everything

Next stop that evening was another tented camp at that magical word, the Serengeti.  To many, this is the place which conjures up the mental image of Africa and David Attenborough striding the landscape with that wonderful voice of his.  I must say that I was hoping not to be disappointed with the reality of it after seeing so much on the TV, but those fears very quickly dissipated.  The journey there was to be a long and testing one over rough terrain but more of that in the next post.