BALLOONING THE SERENGETI
The drive to the Serengeti is quite challenging.  Around 6 hours or thereabouts on dusty, rutted unsealed roads is pretty hard on the body but that's the price you pay for getting to one of the planet's truly amazing locations.

Before leaving NZ, Jennie and I had booked a dawn hot air balloon flight over the Serengeti.  We'd done one a few years ago in Australia and it was a great experience. We were apparently supposed to check in on the afternoon before the flight.  Because of the travel disruption in getting our stranded passengers to the tented camp, we were late departing and there was a strong possibility that we wouldn't make it.  Rama again worked his magic and arranged a (very) early pickup on the morning of the flight and the check-in and briefing as soon as we got there.  We owed him an awful lot what with sorting out the debacle of the Kenya Air flight and now the ballooning!

Pickup from the camp was well before dawn and quite cool so we were well rugged up for the 45 minute drive to the liftoff site.  Three balloons were being prepared with pilots from Portugal, England and Canada.  Ours was Shawn from Canada who was very thorough with his safety talk. 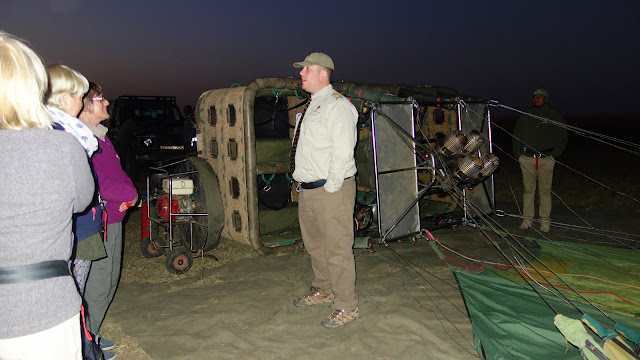 The launch was to be done with the basket on its side and getting in felt like bunking down in one of those convenience sleeping pods for Japanese businessmen!  The balloon was semi-inflated using cold air with a motorised fan and then a flame was introduced - don't remember it being that hot last time we did it! 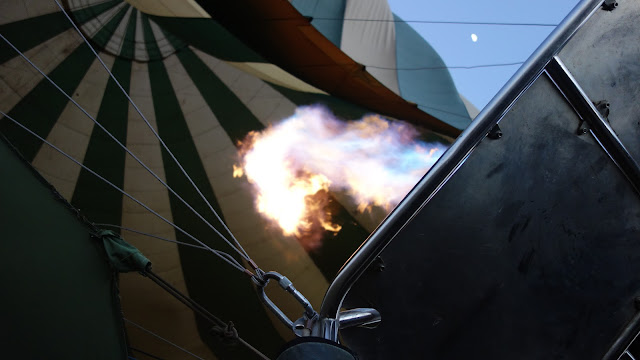 Here we go!
A few bumps as the basket moved into the upright position and then we slowly lifted off.  The timing couldn't have been better as the sun peeked over the horizon just as all 3 balloons cleared the ground. 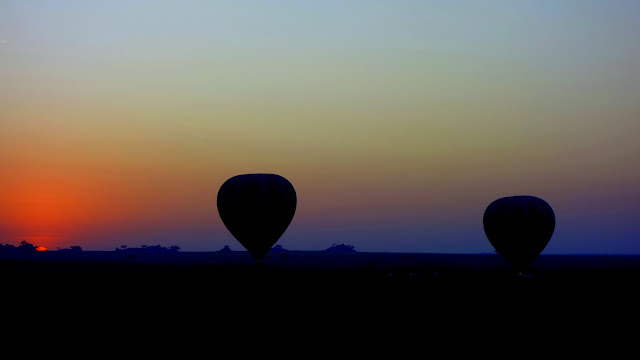 Dawn on the Serengeti

With almost no wind, the balloons drifted slowly over the plain and were held at an altitude of only a few metres from the ground so that we could get a good look at any animals that we passed over.  Now here's an interesting thing...... from the moment we lifted off and saw the sunrise, not one single word was said by any of the 9 balloon passengers for a good 5 minutes.   The view over the Serengeti was so literally overwhelming to the senses that speech was virtually impossible - we could only stare and shake our heads with the majesty of it.  Even as the sun lifted, we still all talked in hushed tones as no-one wanted to break the magic.  It was one of the greatest natural sights, if not the greatest that I've ever seen. In these days of instant media communications, it's probably more difficult to feel strong emotions and it came as a genuine surprise and delight to feel the way we did. 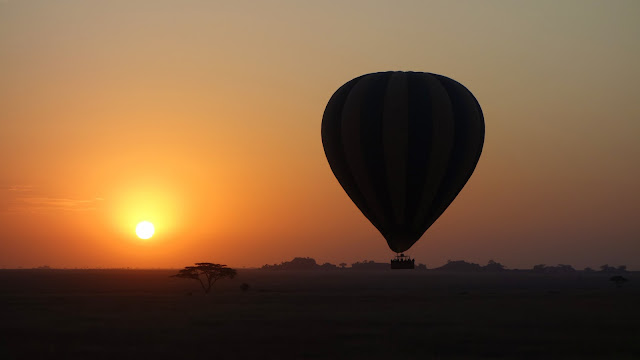 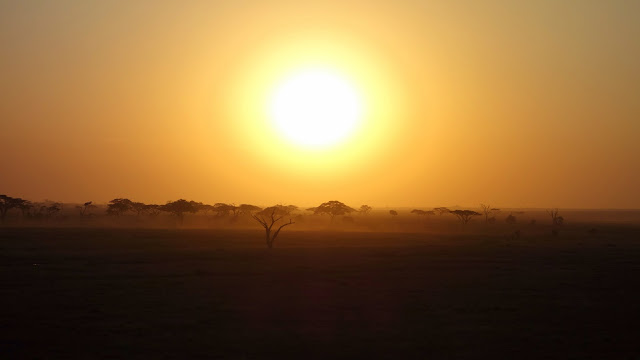 There are still no words.... 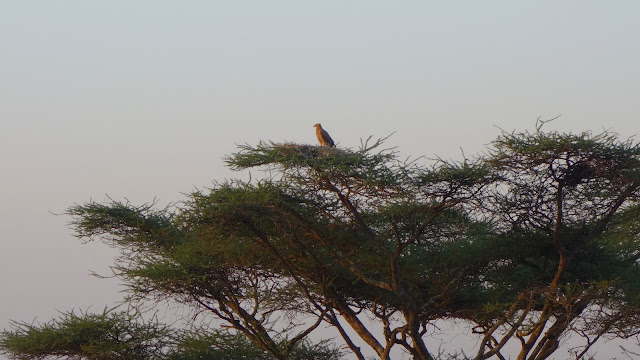 Below tree top level, watched by an eagle 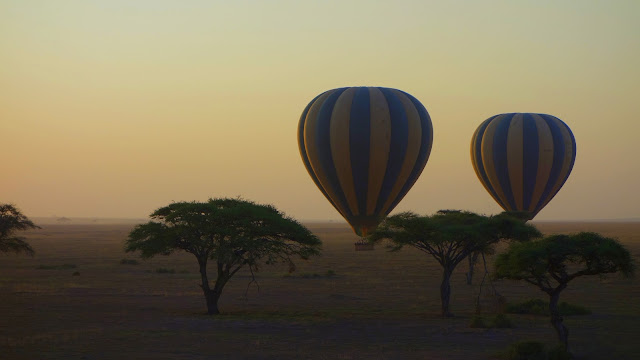 Drifting among the trees 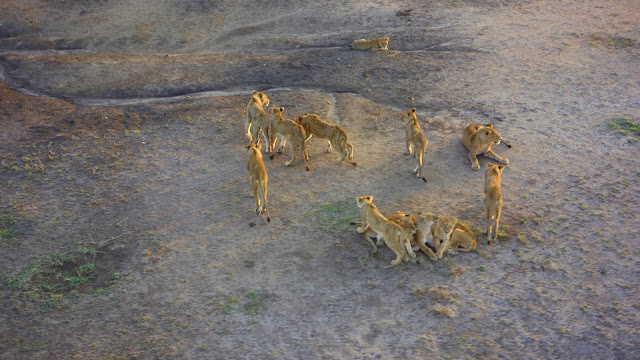 Flying over a pride of lions and being ignored 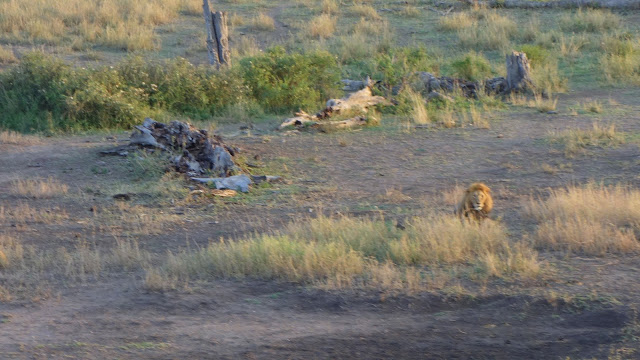 Well this fella has seen us - wonder how high he can jump? 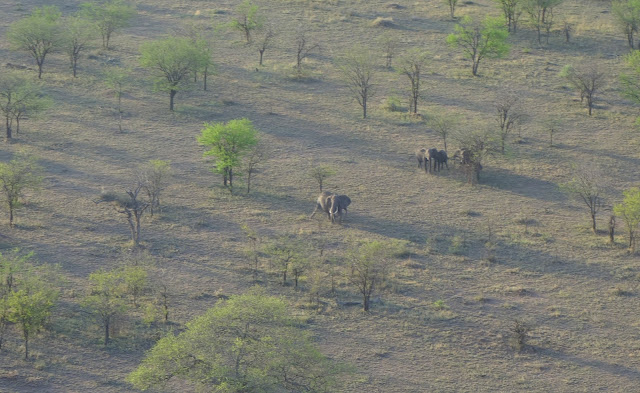 Being scrutinised by elephants 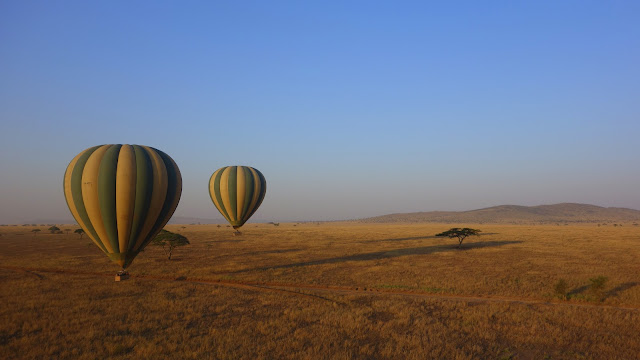 Another million dollar shot - what a truly magnificent place to be 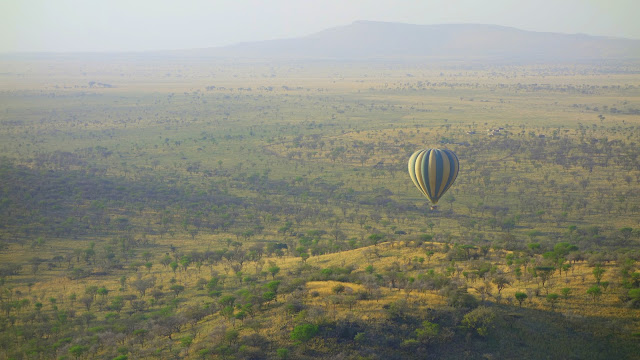 Gaining altitude to start looking for a landing spot

After just over an hour, we gently touched down with no drama and even then, people were talking in hushed tones because how do you do justice to what you've just experienced? 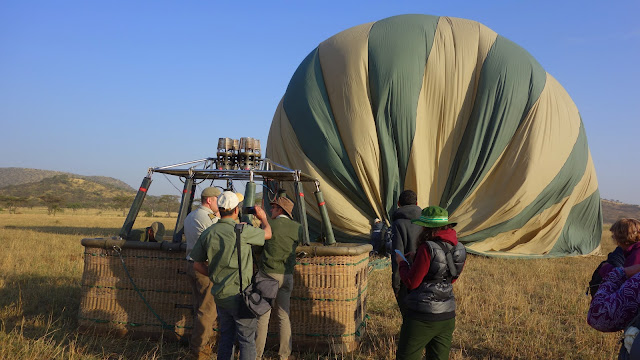 And the pilots get paid for this!

Part of the gentle coming back to reality was a champagne breakfast included in the price held miles from anywhere on the Serengeti - just how good is that?  On the way over to the breakfast spot, I got talking to the pilot from England and it turns out that he's a biker too, and was shortly due to take a break with a bike tour in mainland Europe on his Yamaha MT09. 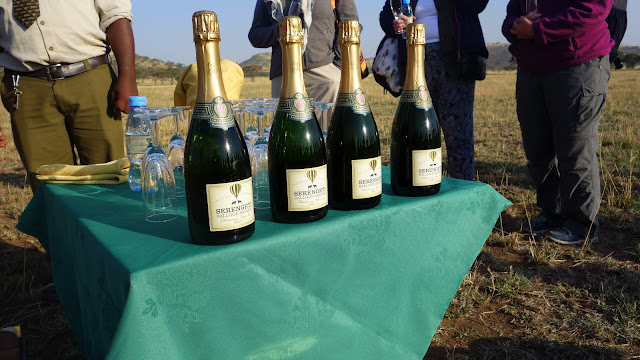 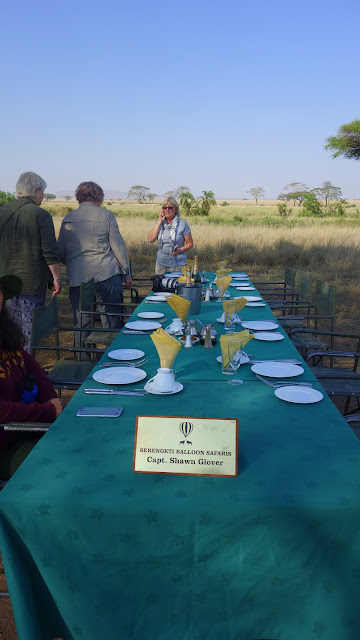 The table for our balloon team 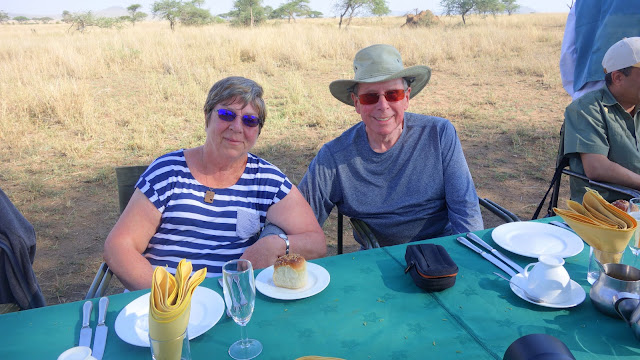 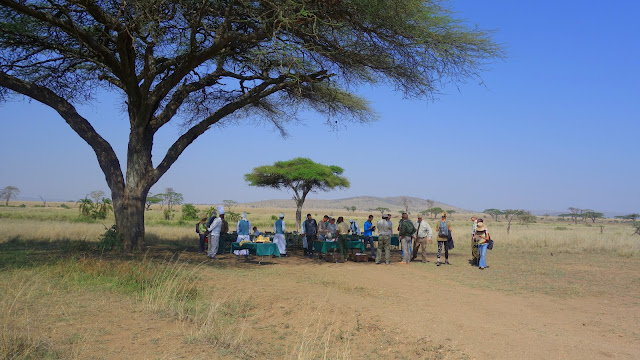 Not bad views from this restaurant

The bathroom consisted of a chemical toilet secluded on 3 sides by a canvas frame which was called "Loo with a View".  You simply turned the sign over to the red side to stop unwanted intrusions, although that didn't stop a troop of monkeys watching from the open side - outstanding! 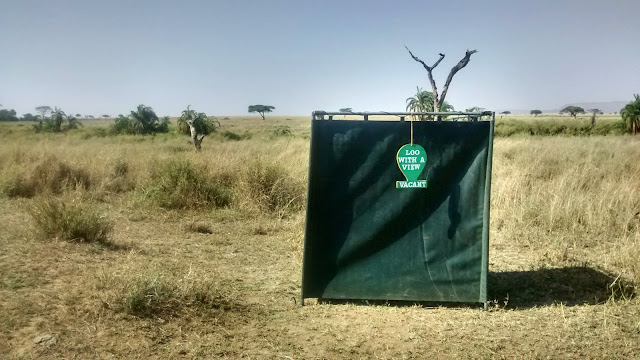 Loo with a View

Sitting opposite us was a couple from Morocco who were on their honeymoon.  The wife mentioned that she was a mechanical engineer like me, had attained her Masters degree at a UK University and had scored a job on the Moto GP circuit.  During further chat, it turned out that she had studied at the same university that I was at at before emigrating to NZ.  However, she rather ruined it by asking when I was there and on hearing the answer, stating that she hadn't even been born then!  Suddenly felt rather old.....

After breakfast, we were driven to a rendezvous spot to meet up with our safari party.  It was an experience that will stay with us forever but how on earth do you top that?  I would be very surprised if we ever balloon again as anything else could never compare.

If you ever find yourself in this part of the world, you won't regret doing a flight with these people: http://www.balloonsafaris.com/ .

More on the Serengeti in the next part.....