THE SERENGETI
Meeting up with the others after our balloon flight went smoothly and we didn't have to wait long at the rendezvous point.  Whilst we were waiting, we noticed some creatures running about which looked a bit like scaled-down wombats.  They turned out to be the Rock Hyrax and didn't seem at all bothered by humans.  They are a food source for most predators so whether they congregate where predators tend to steer clear of, I wouldn't know. 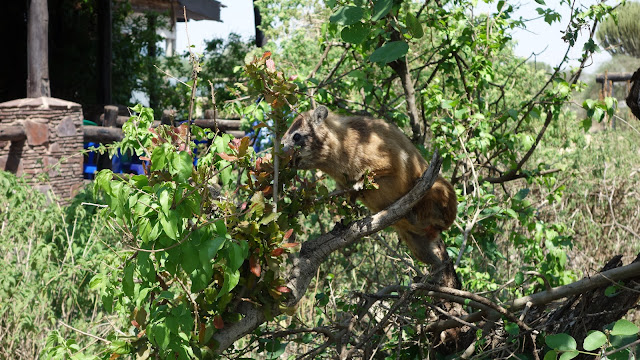 Rock Hyrax having a feed of leaves

Out on the plains, there was the usual profusion of animals.  Although we'd seen the most of the same species multiple times, the varied geography and what they were up to always kept it really interesting. Three in one photo - gazelle, ostrich and warthogs 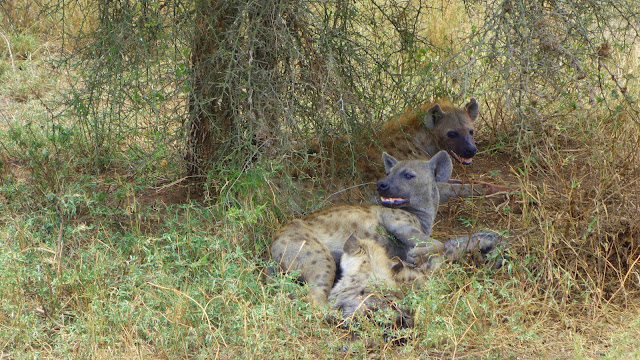 Hyenas and cub chilling in the shade 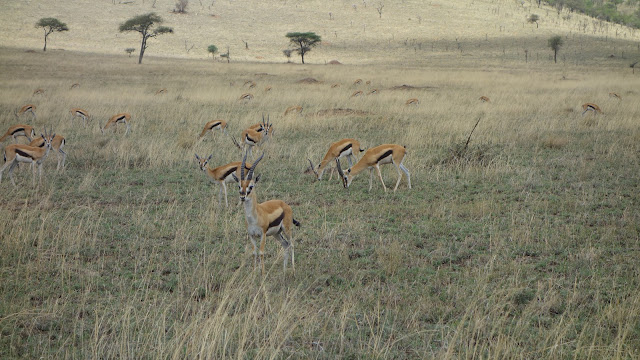 Bird life, even on the plains was varied and interesting too - they don't have to be big creatures to be spectacular. 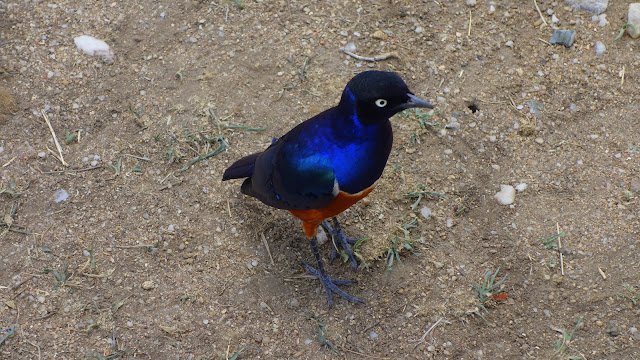 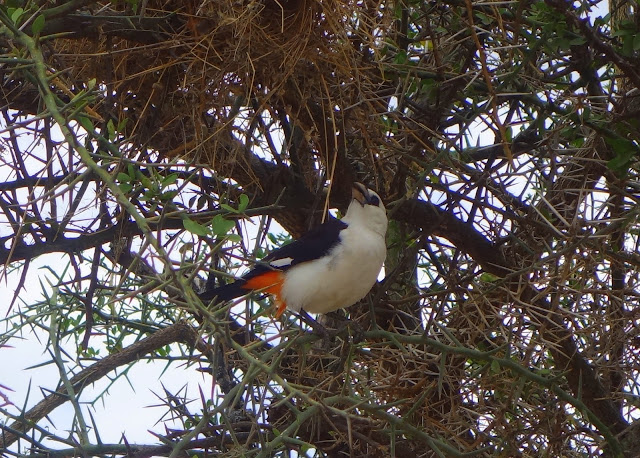 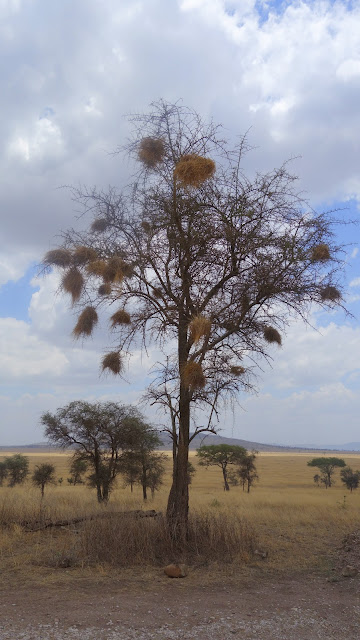 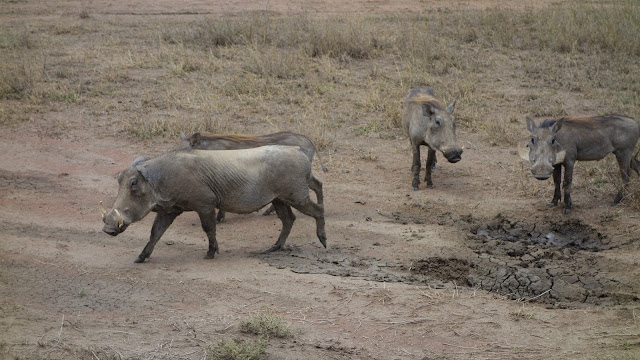 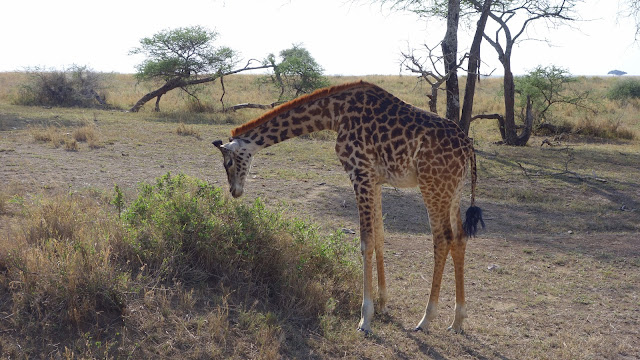 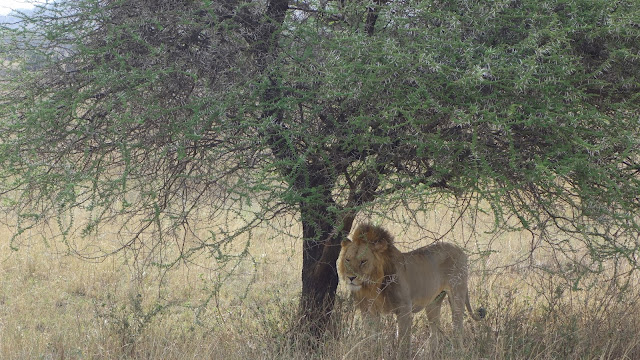 A nice shady spot away from the sun 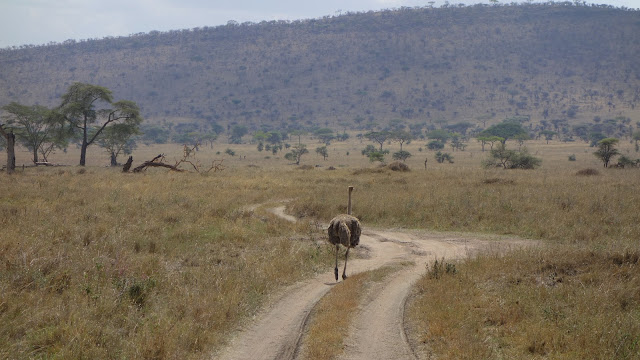 It's not that you're in the way or anything....

Despite the wonderful selection of wildlife we'd seen in Africa, we still hadn't knocked off what is known as "The Big 5".  Cape Buffalo - tick, Lion - tick, Rhinoceros - tick, Elephant - tick,  Leopard - nope.  To be honest, we didn't have high expectations in seeing a leopard as they're predominantly nocturnal and reclusive.  Our guide Rama said that sighting one is not that common.  Then turning onto a new dirt trail and passing under an Acacia tree, Rama and I look up at the same time and bingo - the million dollar shot! 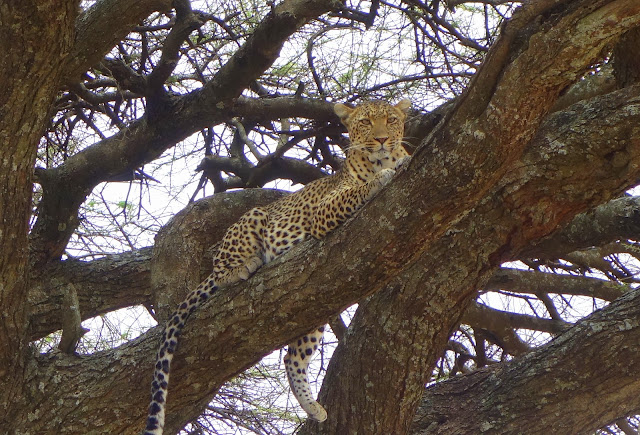 Behold me in my magnificence.....

It's looking straight at us and I slowly aim the camera and hope for the best.  What a magnificent beast it is and for a good 30 seconds or more, I forget to take any more photos whilst we stare at each other and I forget to breathe!  I blaze off several more photos and every one is a winner.  What a privilege to see it. 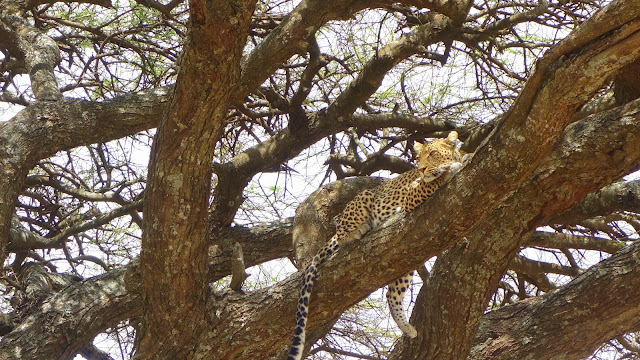 Rising up at intervals in the plain are rocky outcrops called kopjes.  These are often home to a number of animals and were also once used as meeting places by the tribes which used to inhabit the area in the distant past.  We approach a large kopje and after a careful reconnoitre for anything with teeth and an appetite, go exploring. 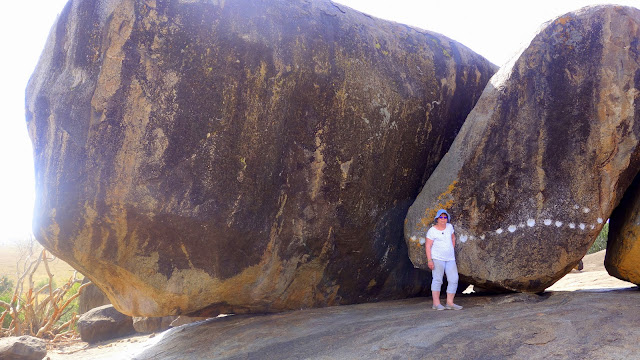 Jennie next to some tribal rock art 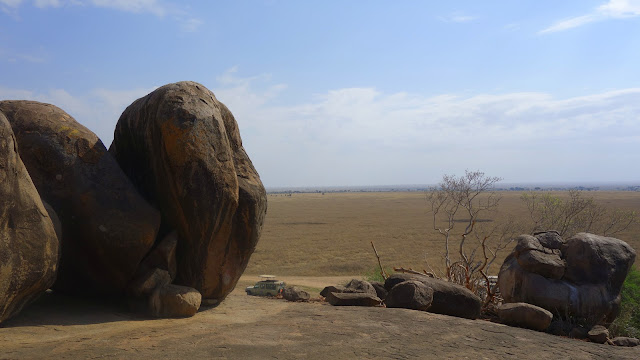 The view from on high

On the kopje, there was a curious granite rock about 2 metres long with pock marks all over it.  Rama said that in days gone by, it had been used as a bell to summon tribes and that the pock marks had been caused by constantly hitting it with small rocks.  Sure enough, it did resonate when we hit it and would have been heard over quite a distance.  This is it.... 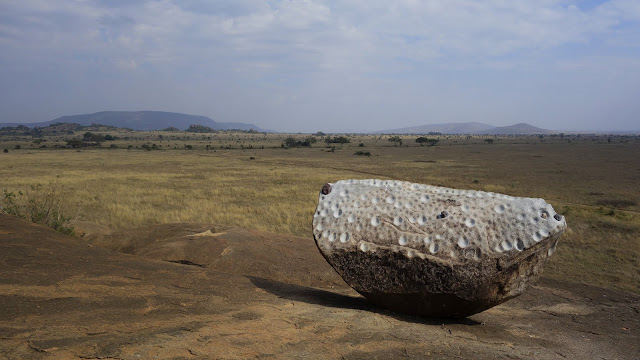 On one part of the Serengeti we passed through, there was nothing but dried grass for miles.  No trees, no animals, no nothing.  Then we saw two male lions plodding resolutely along.  They looked in great nick but it seemed like they had an awful long way to go for a feed. 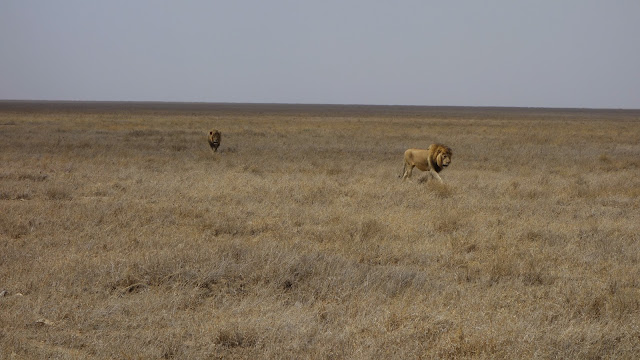 Miles and miles of Sweet Fanny Adams apart from these two 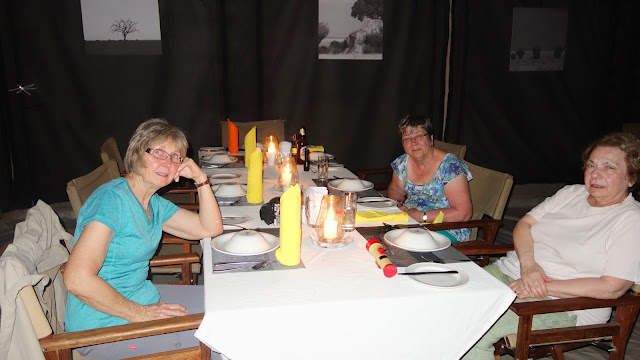 The Serengeti covers a staggering 30,000 sq km, a size that is impossible to get your head round.  You could spend years exploring and not see it all.  Spending just a few days there seems grossly inadequate but at least we've had a taste of one of the world's most famous nature spots and come away with a renewed sense of wonder for our planet.

On the way out of the Serengeti, I took a couple of photos from a kopje at one of the park gates which attempt to show the vastness of the region stretching seemingly forever.  Impossible to portray without having been there of course but they should keep the memories sharp. 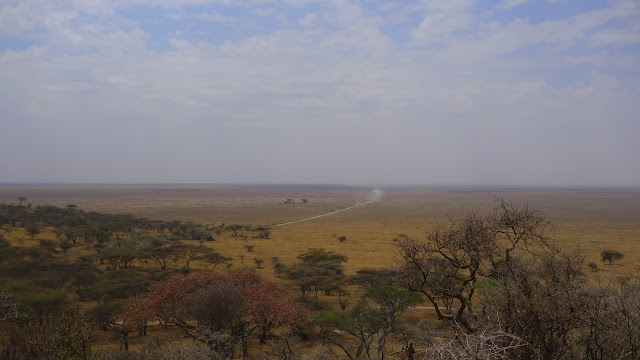 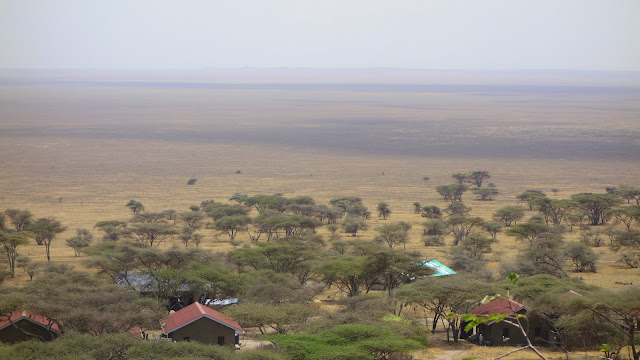 At the park gates 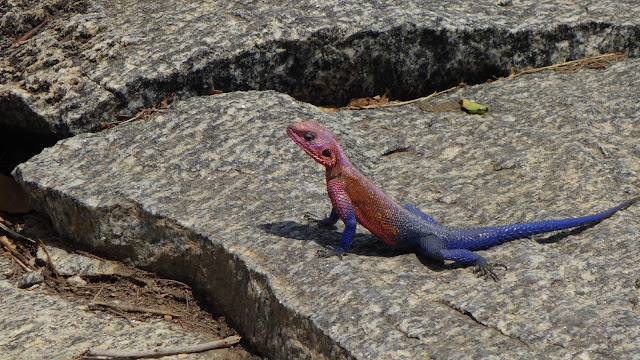 Next, the Ngorongoro Crater!