A wee bit of culture

I turned 73 a week ago and when Jennie asked me earlier what I wanted for my birthday, I struggled to think of anything apart from a Lotus 7 replica.  Got "THE LOOK" so that was a non-starter.  I then suggested an overnighter somewhere interesting and left it to her.

Well, she came up with a cool idea and the first stop was the city of Hamilton, some 160 km from home.  I know it best for being where our eldest son and his family live plus where I have the KTM serviced but it's also known for its World class municipal gardens .  It's been years since we visited them and everything has changed since then.  It covers around 54 hectares and is split up into various themes.  It's also absolutely free to members of the public.  Too big to get round in one go, we settled on a couple of  hours and will go back again in the coming months.  Funnily enough, Flyboy has just posted some magnificent photos and a drone video of Jacaranda trees in bloom on his blog which are well worth seeing.  Onya Dave - who knew that Oz and Kiwi bikers could be sensitive, nature-loving types ;-).

First stop was through the tropical garden.  We have a number of the plants in our own garden such as bromeliads and Bird of Paradise and although Hamilton gets frosts, this garden has its own microclimate. 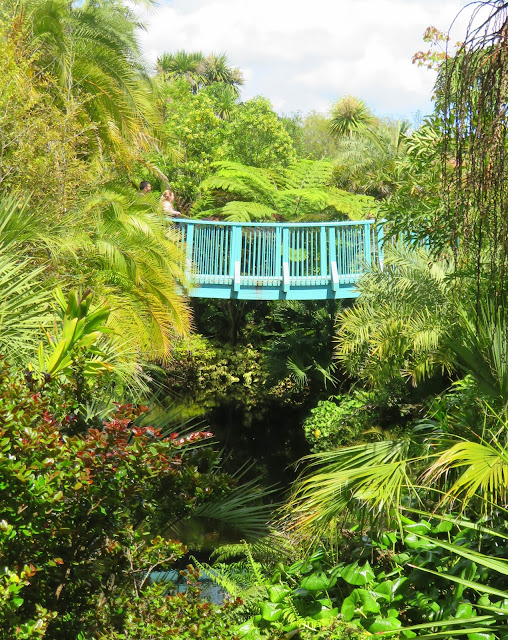 Lush is the perfect description 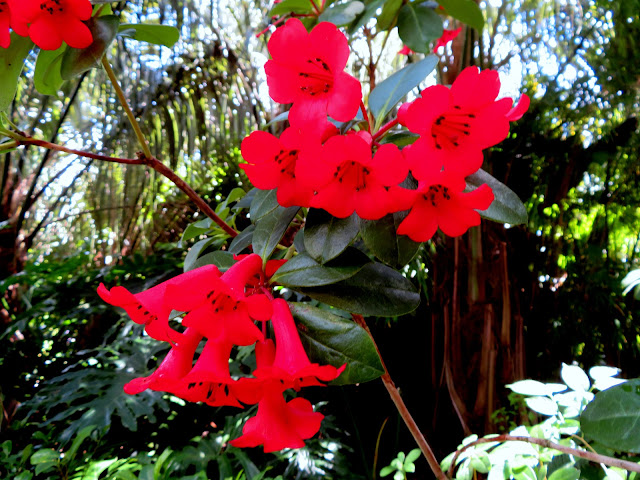 Some of the tropical blooms
Next stop was the Surrealist Garden and at the entrance were some characters, cups and saucers from the Mad Hatter's Tea Party; beaten from copper sheet. 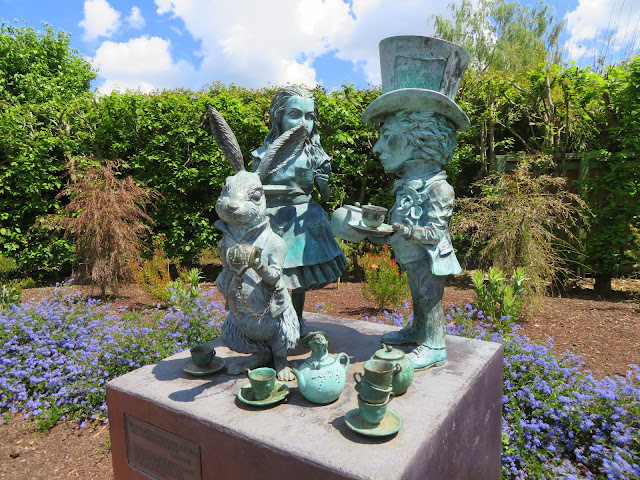 Seriously nice work
Walking through what was a labyrinth of corridors, we were suddenly faced with huge tree-like structures covered in creepers. 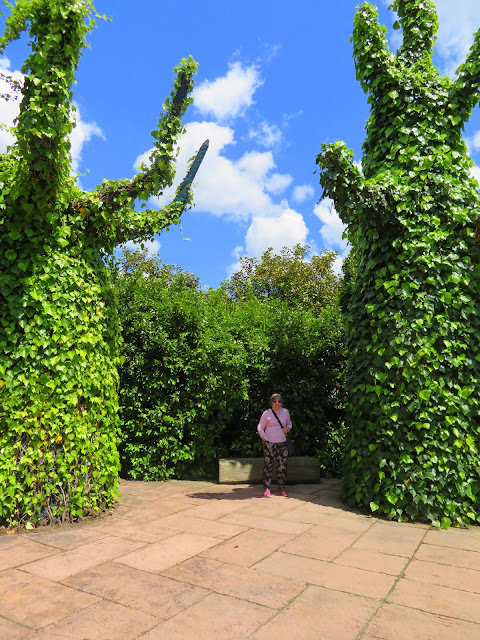 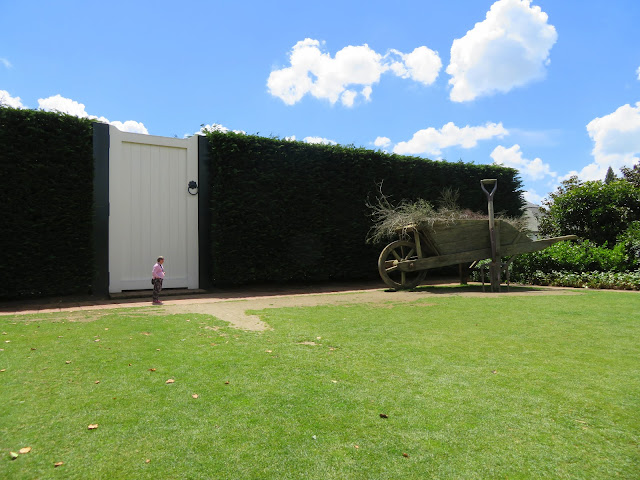 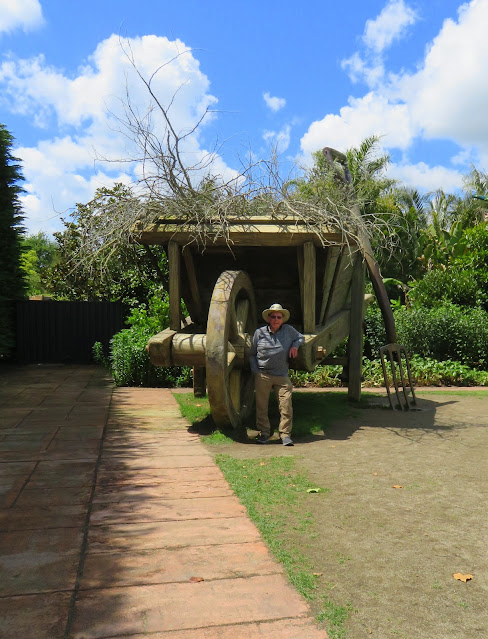 Just the thing for serious garden maintenance
Next two areas were an old-fashioned English country garden packed with annual and perennial flowers and a huge kitchen garden full of herbs and vegetables.  All the produce is given away to the needy. 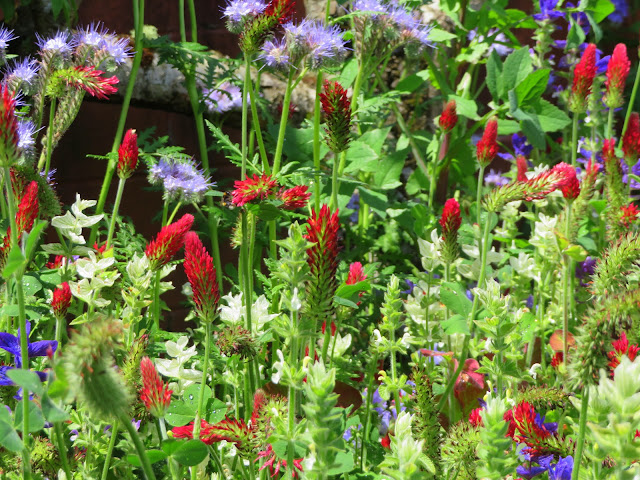 Packed flower beds
Next up was a replica of an English Tudor period garden.  Very formal with all sorts of mythical beasts on tall poles. 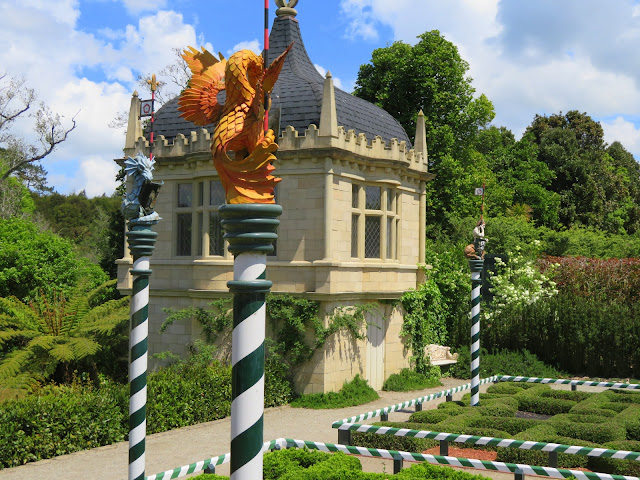 Formal Tudor garden
One of the real delights of this place is that each garden is shielded from view by tall hedges so there's no advance warning of what you're going to find.  In this instance, it was a tethered helium-filled balloon with a boat suspended below - how cool is that?  Looked like something from a children's fantasy story. 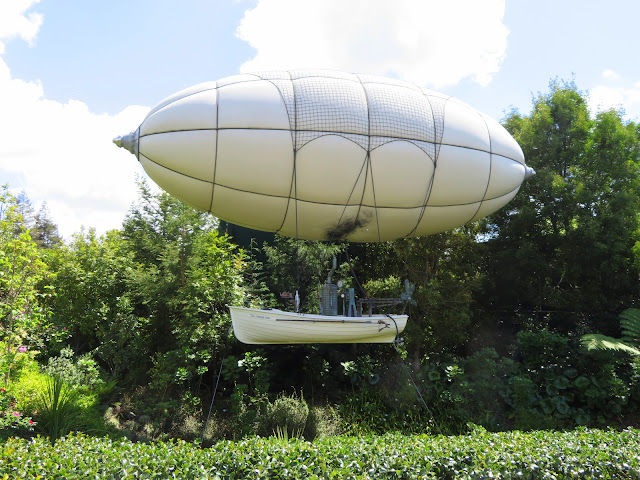 An unexpected find!
The next garden was in tribute to early 20th century Kiwi writer Katherine Mansfield.  The setting was from her short story "The Garden Party". 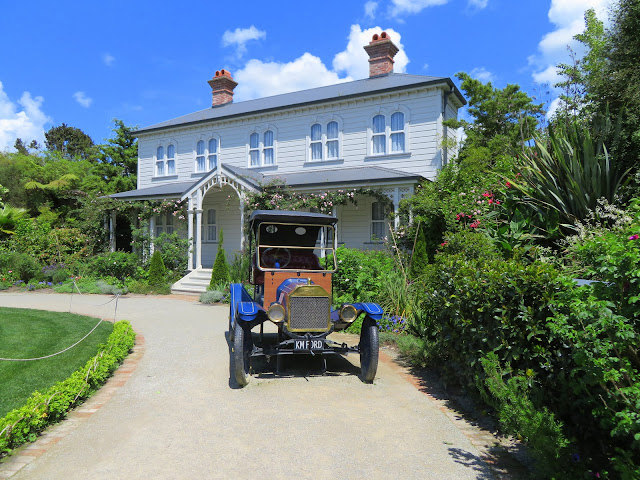 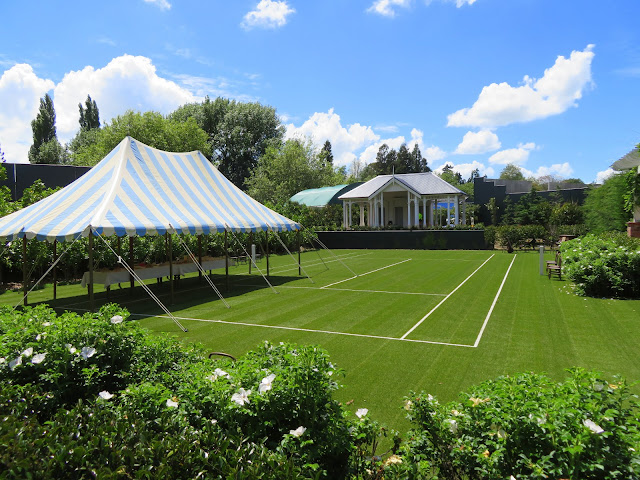 Cucumber sandwiches and cake, anyone?
By now, it was getting hot and we were in need of sustenance.  With only half of the gardens covered, we decided to enjoy the rest at leisure and come back another time rather than rush things. 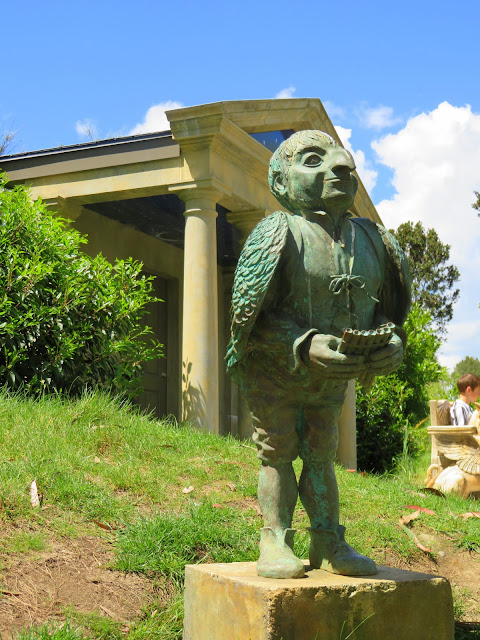 More copper statuary (based on the Magic Flute opera I think) 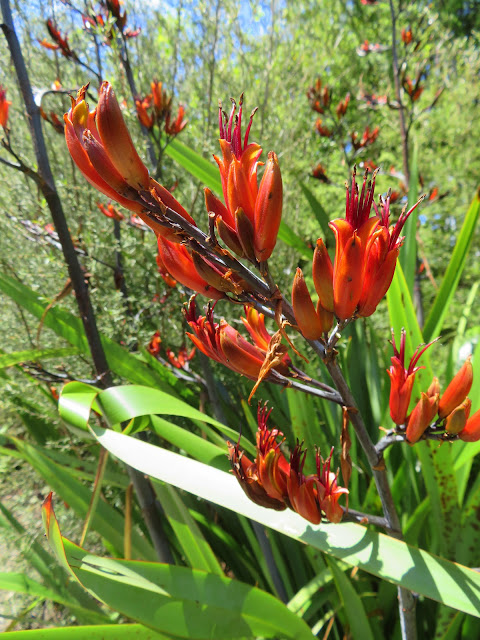 NZ native flax flowers
After lunch, it was time to travel to the nearby town of Cambridge and check into the new apartment/hotel complex that Jennie had booked, then head out and explore all the back roads and other sights that we hadn't seen for years.  We were originally going to walk into town for an evening meal but within 100 metres of the hotel, there was a Malay/Indian fusion restaurant which had only been open for a few months.  The food and service was absolutely outstanding and the range of craft beers  and single malt whiskies was as good as I've seen anywhere.  Being close to the hotel was a bonus after such a heroic meal!  I may have let the side down a bit dressed in jeans with Jennie looking a million dollars in her chic casual gear :-) . 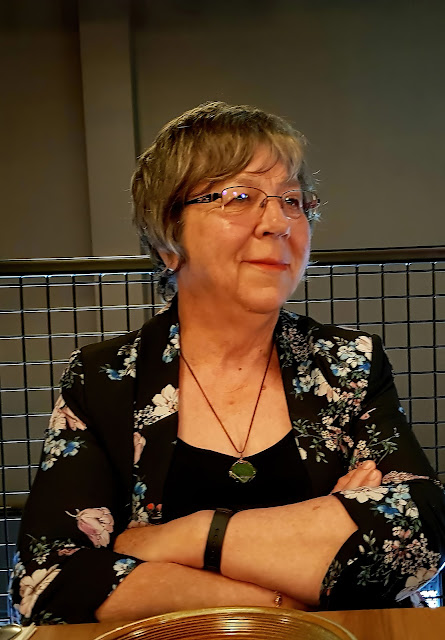 Mrs James looking super-elegant at Koi restaurant
After breakfast, a visit to the local farmer's market was in order.  It's always great to buy fresh local produce at great prices. Cumberland spiced sausage and black pudding from an English butcher were a real find.  It was time to gradually head home and being a national holiday weekend, sticking to the back roads was a good plan.  This is where my motorcycling knowledge came into play as it's an area where my mates and I occasionally come to play for the twisty lanes and stuff-all traffic!  First stop was a little-used park and hill lookout which used to be the site of a tuberculosis sanatorium around 1900.  It gives fantastic views across the Waikato province on a clear day.  There was a bit of low cloud about but the views were still pretty good. 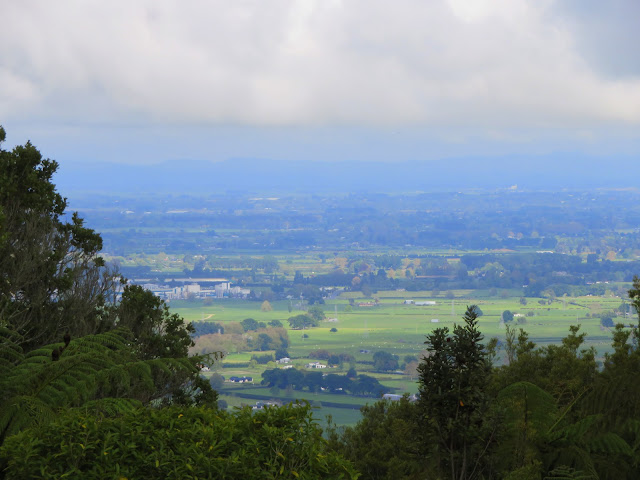 View from Maungakawa Hill
Another short stop was made half way along another superb motorcycling road at reservoir supplying a nearby small town. It's also the home of the Te Miro Mountain Bike Park , maintained by the local authority with trails to cater from experienced MTB'ers through to small children.  A great asset in beautiful surroundings. 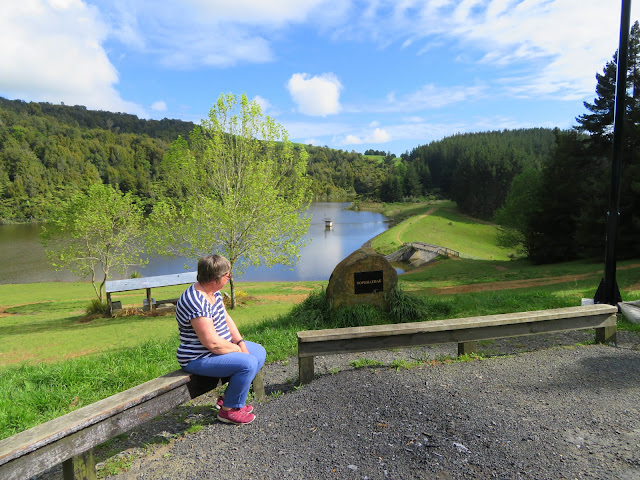 Part of picturesque Te Miro Mountain Bike Park and reservoir
A lovely couple of days away exploring.  I've now had the hard word put on me to do the same for Jennie's birthday in 6 weeks so I'd better put my thinking cap on!
Posted by Geoff James at 17:09