One of my close friends and Blackbird-riding buddies has developed a serious medical condition and is about to commence treatment.  I rode up to Auckland yesterday and joined up with our other close riding partners/mates to spend the day with him.  You can't but help have some trepidations but as it turned out, we all had a ball with plenty of banter flying and non-stop laughter.  Not the sort of banter and laughter to cover a potentially awkward situation, but the honest, straightforward and disarmingly direct conversations which you can have between true friends.  I feel both humbled and incredibly privileged to have friends of that calibre.  None of our riding group are at all religious and it seems somewhat hypocritical but we'll be offering up a few prayers over the coming months.  The prognosis is good and we'll be there to keep his spirits up.  It does, however, reinforce the notion that you should never put off anything that you really want to do in life. 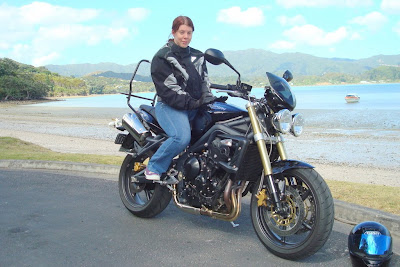 On a happier note, I took our daughter Victoria for a ride today.  It's been 4 years since she came on the back of a bike and she's as good as her mother - you'd hardly know either of them are on the back.  Victoria graduated with a Masters degree in Psychology late last year and works with prisoner rehabilitation in the Justice system - we're incredibly proud of her.  She's feisty and scares the hell out of me.  I'm picking that the prisoners tread warily too!
Posted by Geoff James at 17:31