Oh dear, I must be turning into a wuss, getting old or any other insult you care to toss in my direction!  After decades on faired bikes and  a mere 20 months on a naked Street Triple, it's a delightful change of scene which I'm loving. However, at the risk of attracting snorts of derision from my fellow bloggers from the n-w of the USA and Canada; I find getting cold hands in the winter a bit of a trial.

Ok, I hear you say, what temperatures are we talking about here?  Shuffles feet in embarrassment....  we almost never get frosts where I live, let alone snow .  BUT in mitigation, the provinces south of us do have early morning frosts.  Ok, only down to about -4 C on the coldest of mornings if you want to quibble, but even that gets a mite chilly on the paws when you're on the bike for a few hours at a stretch.  At this stage,  Troubadour and Stacy  will be shaking their heads after their outstanding cold weather rides.  I've not bothered with heated grips or gloves on the Triple because that would be really wussy given our generally benevolent climate.  Besides, I don't really want to load up the electrical system of the bike any more than with my radar detector and GPS.  But what to do for winter riding??

I recently saw a photo of a Street Triple equipped with Acerbis Dual Road hand guards which matched the colour of the bike. They were elegantly designed whilst still functional as opposed to the larger trail bike guards.  The penny dropped - a set of guards for the winter to reduce wind chill on the hands and I should be fine!

Trawling the 'net for prices showed a fair bit of variation but with the current exchange rate between the US$ and NZ$, a pair were finally ordered from Motostrano in California and they arrived today - superb service and thoroughly recommended! 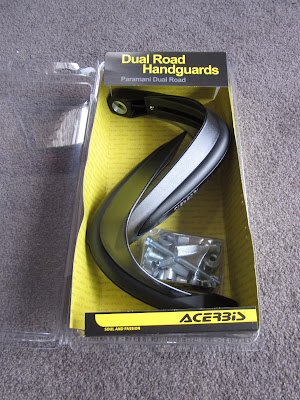 The universal mounting kit which comes with it has just about every combination known to mankind.  However, I was struggling to get the OEM internals out of the bars so made a small modification to one of supplied components and voilà - fitted in a few minutes! 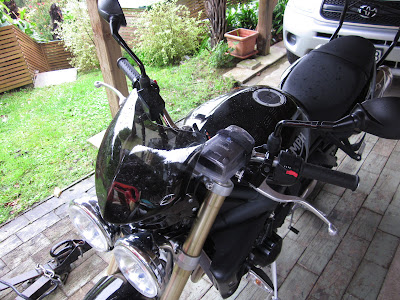 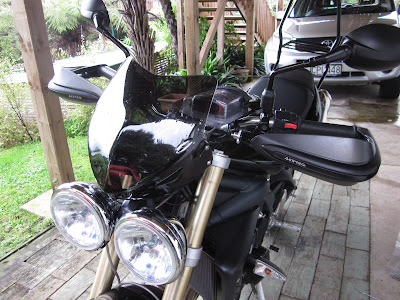 Triple after mounting the guards 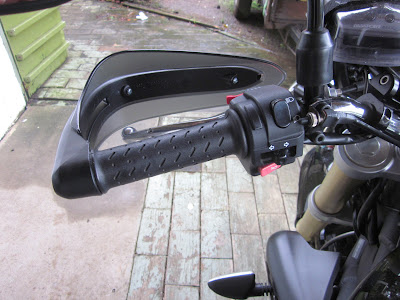 The colour blends in beautifully, as does their shape and they don't detract from the bike at all - it still looks brutish.  They'll get removed in the warmer weather though as they'll be too hot. As I write, it's absolutely tipping down, which is what it's mostly been doing for the last 2 weeks so I'm not about to go out and try them this instant.  However, the forecast is actually good for the weekend so looking forward to an early trial.

Oh, and one final thing.... in the second photo up, you can see the brand name Acerbis written in small print along the centre of the guard.  You can actually unscrew that section and replace it with a strip of LED's.  You can be assured, dear reader, no way is that going to happen.  Apart from having a loathing of over-dressed Goldwings and other cruisers with coloured strip lights and other ghastly accessories,  I dread to think what my riding partners would say.  Actually, I do know what they'd say and my street cred, such as it is; would be in the gutter.  A bridge way too far!