Call it Karma if you like but the last few weeks have seen a few quite independent events become inter-twined.

I made a recent post about blog piracy and the swift action taken by Google to remove the material from the offending person's website.  The outcome could have been a whole lot more positive for that person had some simple courtesies been extended to the people he stole material from.  Meanwhile, at the complete opposite end of the scale.... a short while ago, I received an email from a British couple, Julie and Brad Jones, who currently live in France.  Julie explained that they had seen a couple of photos on the internet which I'd taken in the early 1970's of factory supported BSA/Triumph racing triples.  They were classic BSA fans and in particular the BSA/Triumph factory racing triples. They were intending to publish a booklet on a particular period and series of events involving these bikes and would I please give permission for my photos to be included? As as the respondents in the post about piracy said, most bike enthusiasts are more than happy to help when it's fellow enthusiasts asking, and making the normal acknowledgement offers.  Julie and Brad's request ticked all the boxes and I was delighted to supply a few additional photos as well.

Their request held particular significance as in my early 20's, my mates and I used to go to UK race meetings specifically to watch those racing triples so they were very much part of my formative years as far as bikes went.  Small wonder that I currently ride a Street Triple!   Apart from their looks and amazing performance, it was the engine note which literally gave me goosebumps.   They had a 3 into 1 exhaust system, running into a long, shallow taper unrestricted megaphone.  When those bikes were warming up in the pits with their unique howl, I reckon most spectators literally felt the hairs on the back of necks go up.  And at full throttle, well.... aural sex!! (No, not oral sex, sigh....) 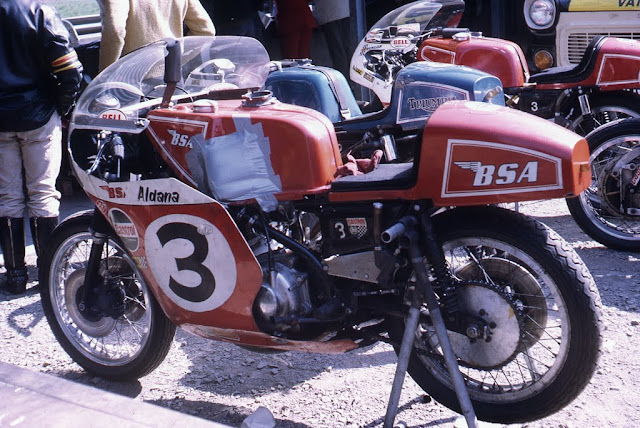 The period in question which Julie and Brad wanted to cover was the 1971 Anglo-American Match Race Series.  It involved a team of household names from the USA (Mann, Castro, Emde, Rice, Aldana and a non-riding team captain Gary Nixon) pitted against the UK's finest in the shape of Smart, Tait, Cooper, Jefferies and Pickrell, all on BSA/Triumph triples.  I was fortunate to be at 2 of those race meetings and the spectacle (and noise!) is still with me to this day. Incredibly close racing with no quarter given.

To complete the reminiscences, the finished booklet arrived a few days ago with Julie and Brad's compliments and what a cracker it is!  As well as the detailed background story to the racing series and results, it's packed with memorable photos: the riders, the bikes and some wonderful promotional material for the event, including the one immediately below.  Monty Python fans might recognise the attractive woman as Carol Cleveland who set a lot of youthful, hormonal hearts racing, including mine; whenever she appeared in that classic TV show! 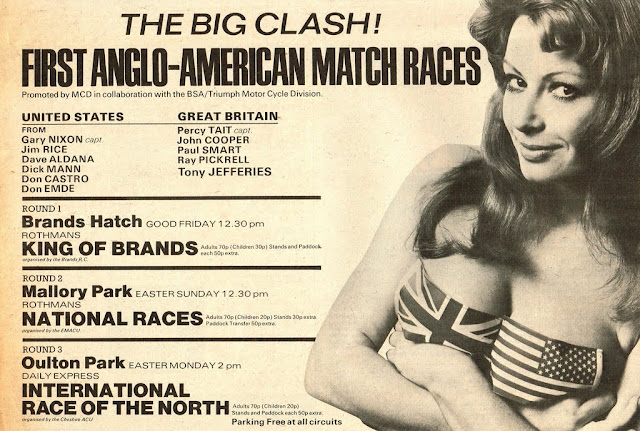 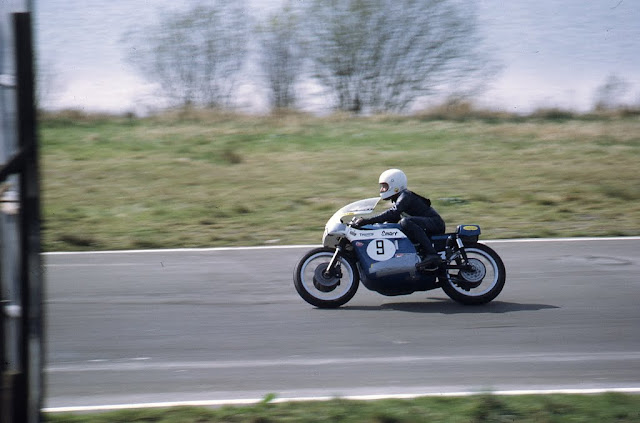 Paul Smart at speed on the Triumph Triple - Mallory Park 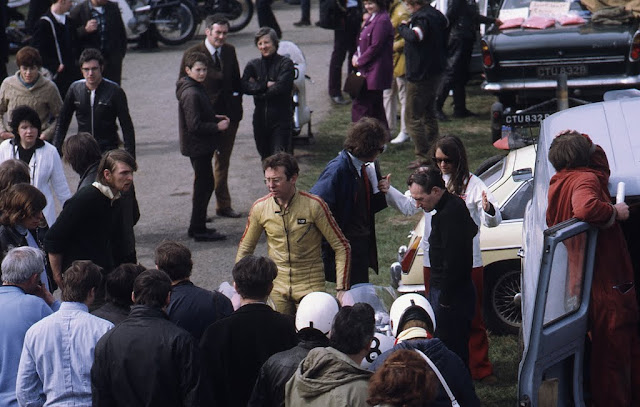 John Cooper, UK team member. Looks like Phil Read in the background
(In the same year, JC beat Giacomo Agostini on the works MV  Augusta in one of the best races ever seen in the U.K and I had the privilege of being there!) 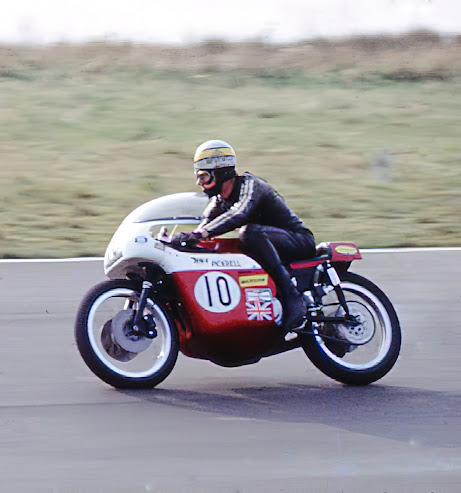 Ray Pickrell on the Rocket 3
If there are any other racing BSA/Triumph racing triple enthusiasts out there and Anglo-American Match race fans in particular, the booklet is commercially available at a very modest price.  Details including shipping costs can be obtained from the Jones' HERE .  They also have a number of other booklets covering BSA's and Triumphs from  around that period so it would pay to ask if you're going to place an order.

So there we are, a courtesy request for photos leads to a win for Julie and Brad, a win for me in the shape of a great booklet (thanks again guys!) and a whole load of great memories. Karma?  I'd like to think so!
Somewhere in the house, I have an additional box or two of 35 mm slides taken at the '71 match races, both in the pits and out on the circuit.  Ditto for multiple boxes of slides taken at the 1969 Isle of Man TT.  I really ought to have a concerted look for them as there's real history in those boxes!