In praise of warm paws, a tyre update and other stuff

Even where we live in NZ, we get sometimes light winter frosts first thing in the morning.  Before readers who get REAL winters tell me to harden up, let me explain!  Most of the mentoring I do involves 500 km days, often in colder parts of the country which also means early starts from home.

On a naked bike, wind chill is a big factor.  I hate the loss of feel with thick winter gloves and although I've had heated grips on some previous bikes, my fingers have still suffered on longer runs.  Not good for control, especially when in the company of other riders.  Last spring, I took the plunge and bought some Gerbing G3 heated gloves from Revzilla in the US.  They sat in the cupboard until yesterday when the first cold spell of winter struck - the first opportunity to try them out in anger! 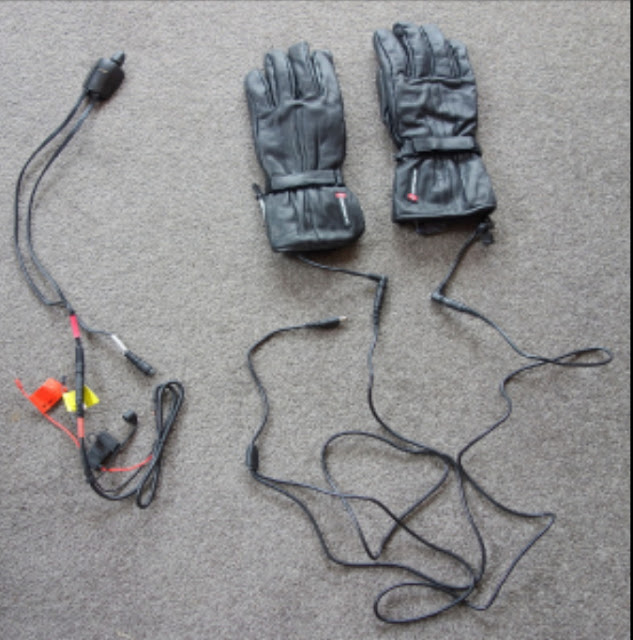 The gloves themselves have heating wires throughout the whole glove, including the fingers which is what I saw as the big advantage over heated grips. The componentry consists of a fused connector to the battery, a variable temperature controller and a wiring loom from the controller to the gloves.  In my case, this goes up the inside back of my cordura jacket and down through the sleeves between the jacket liner and the shell.  Gloves were US$140 and the temperature controller a further US$50 -  a little more than heated grips but not expensive in the scheme of things.  Incidentally, the gloves are made from the softest leather I've ever encountered. 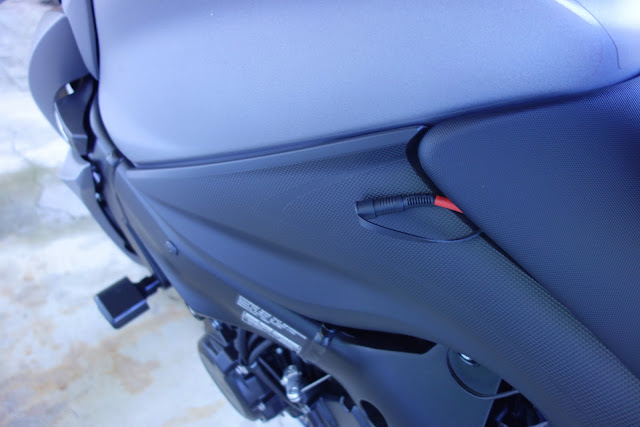 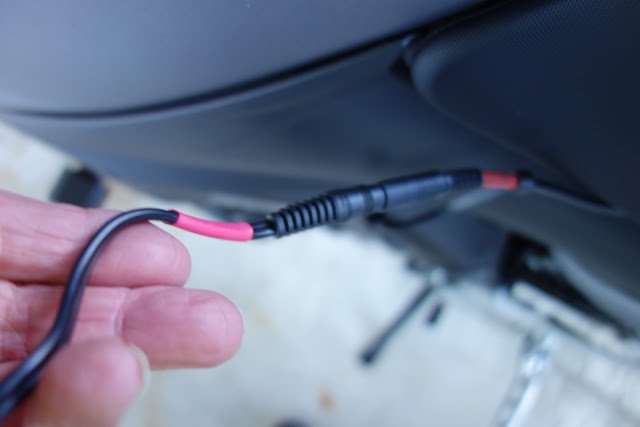 Connector to the temperature controller 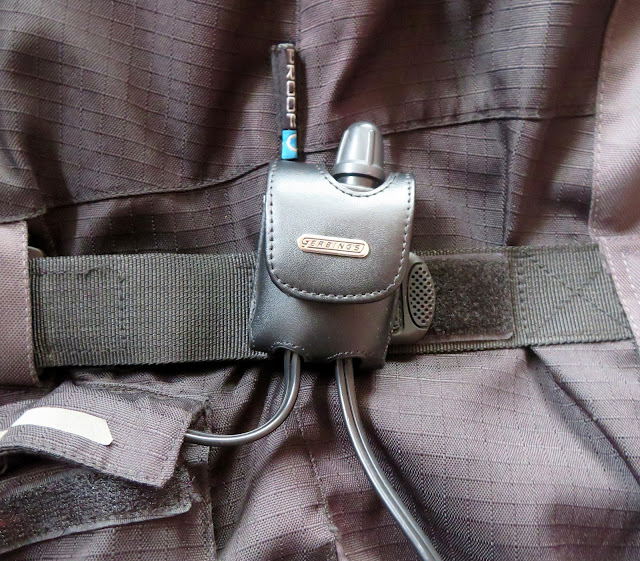 The temperature controller sits in a purpose-made case which is looped onto the waist tensioners of my jacket - very quick to adjust (but not on the move!) 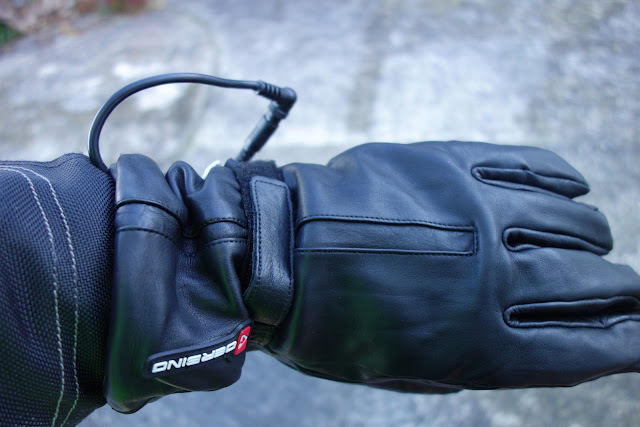 Connector from sleeve to glove

Connecting everything up is hassle-free as the ample wiring length means that you can connect up the gloves before slipping them on.  It's easy to run the surplus back up your sleeve but it's not really necessary as they don't flap about or get in the way of anything.  Similarly, there is sufficient length in the wiring from the controller to enable you to get on and off the bike without having to unplug.  The connectors look pretty sturdy which was a worry when initially buying the gloves as fellow moto-blogger Richard Machida let me know that he'd had some connector breakages on his. Perhaps they've been redesigned since then but time will tell.  Besides, with Richard residing in Alaska, his probably get a lot more use than they're likely to in NZ!

On to the million dollar question - do they work?  Well, before leaving home yesterday, I deliberately set them at the low end of the range and they were fine in 2 or 3 degrees C temperatures.  Plenty of scope for cranking them up when temperatures drop even lower!  Happy?  You bet!

In a previous post, regular readers will remember that I was less than impressed with the Dunlop D214 sport tyres which were OEM on the Suzuki GSX-S 1000.  There were several reasons for this but as I cover up to 20,000 km per year and the rear D214 only lasted for 3700km before having to be replaced, cost was certainly a consideration!  I reverted to Michelin PR4's which I'd had on the Street Triple.  As well as being better suited for a bigger range of weather conditions, speed of roll-in to corners was markedly improved as the 55 profile PR4 has a sharper crown than the 50 profile D214.  The PR4 has now racked up nearly 7000km including a trackday. The profile remains excellent with heaps of tread left.  I'm picking that life will be 10000 km or better, which is pretty satisfactory on a 1 litre sport bike. 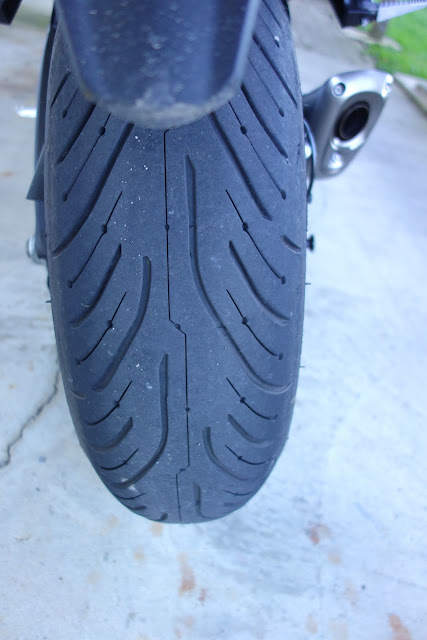 Finally, nothing to do with motorcycles but living in a benign climate, there are plants flowering in our garden through the whole winter.  Here's a selection of photos I've just taken. 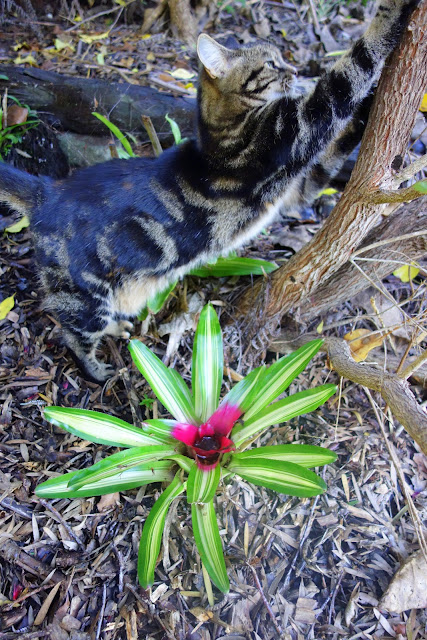 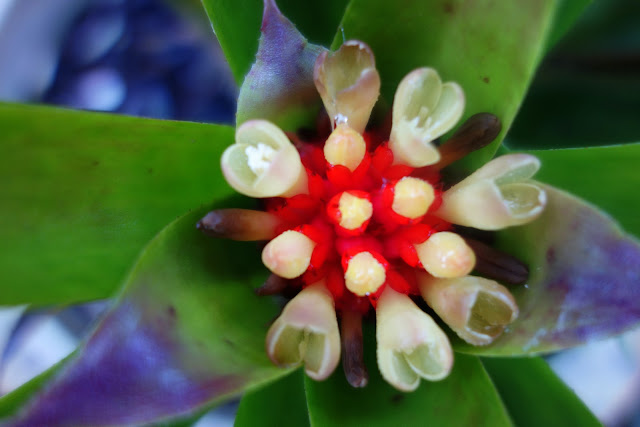 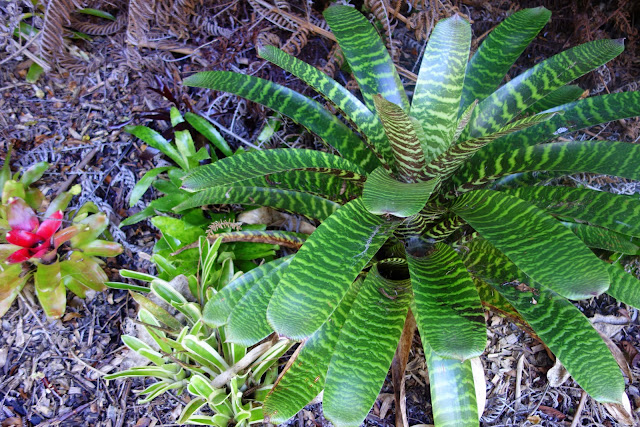 Various bromeliads - the banded Vresia is nearly a metre across 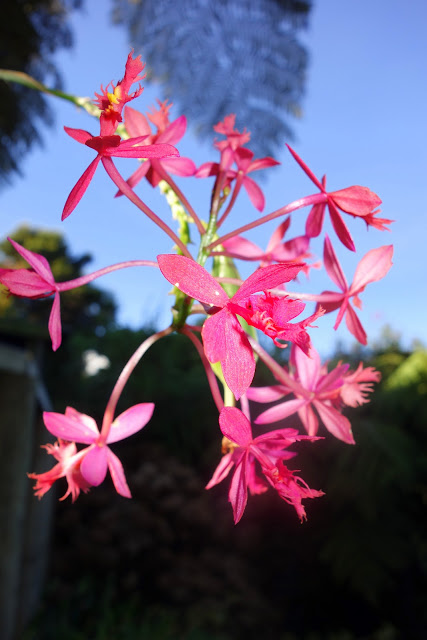